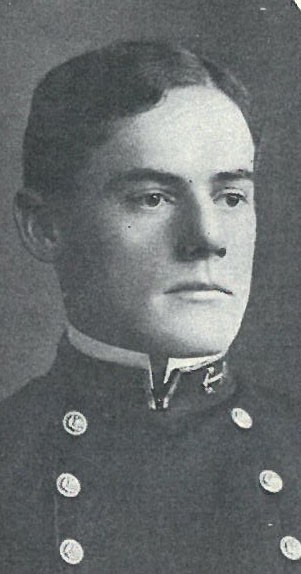 William Ancrum was born at "Rossdhu," Abbeville County, South Carolina, on 8 July 1881, son of William Alexander and Anna Susan (Calhoun) Ancrum. He attended Camden, South Carolina, schools, and entered the US Naval Academy in May 1898, remaining there until February 1899, during part of the Spanish-American War period. Re-entering as a Naval Cadet from the Fifth District of South Carolina on 22 May 1899, he was graduated on 2 February 1903. He served the two years at sea, then required by law, and was commissioned Ensign in the US Navy to date from 3 February 1905. Through subsequent promotions, he attained the rank of Captain, his date of rank 4 June 1926. He was transferred to the Retired List of the Navy on 1 September 1938, but again had active duty during the World War II period.

After graduation from the Naval Academy in February 1903, he was assigned first to USS Wisconsin, at the Bremerton, Washington, Navy Yard, for passage to Chefoo, China. There he was transferred to USS Oregon, a unit of the Asiatic Fleet. Detached upon completion of more than two years' duty aboard the latter battleship, he served in the destroyer Chauncey, which patrolled the Western Philippines to enforce neutrality during the Russo-Japanese War, and which also operated with the Army against the Moros. He joined USS Minnesota at her commissioning, 9 March 1907, and served aboard during her cruise around the world with fifteen other battleships.

He was next ordered to the Navy Yard, Boston, Massachusetts, where USS Flusser was fitting out, and served briefly aboard that destroyer after her commissioning on 28 October 1909. On 29 December 1909, he reported to the Navy Yard, Norfolk, Virginia, as an assistant to the Engineer Officer of that Yard, and during that tour of duty served additionally as a member of the Court of Inquiry there. He had temporary duty in connection with ordnance work on USS Kearsarge and USS Kentucky at the Philadelphia Navy Yard in October 1911, and when detached from the Norfolk Navy Yard on 16 December 1912, he assumed command of USS Warrington, which he commanded for six months.

In May 1913 he assumed command of USS Jarvis, and from 5 September 1913 to 20 July 1915, he commanded USS Flusser and the First Division, Torpedo Flotilla, composed of the destroyers Flusser, Reid, Preston, Lamson and Smith, of the Atlantic Fleet. Part of his division escorted General Funston's Army from Galveston to Vera Cruz, Mexico, during the Mexican Campaign in 1914, and upon completion of that mission proceeded to Tampico to transport American refugees to Galveston.

From 1915 to 1917 he had duty at the Naval Training Station, Newport, Rhode Island, with additional duty as the Assistant Umpire from Navy Department Strategic Maneuver No. 2, aboard USS Brooklyn; and attended a course at the Naval War College there.

On 6 April 1917, the day war was declared on Germany by the United States, he reported to USS Birmingham for brief duty, after which he was transferred to the gunboat Sacramento, in which he had a short period of duty as Aide to Commander Squadron TWO, Patrol Force, on coastal patrol from Cape Cod to Barnegat.

On 1 August 1917, he reached London, England, on orders to the staff of Admiral Sims, who was in command of the US Naval Forces operating in European waters. In July 1918 he had special additional duty at Southampton, England, investigating conditions aboard the Nopatin, Charles, Yale and Narraganset, small ex-coastal steamers which had been assigned to transporting Allied personnel across the English Channel. He received a Special Letter of Commendation from the Secretary of the Navy for valuable and meritorious service "as Aide on the Staff of Commander, US Naval Forces in European Waters."

Upon his return to the United States from London, he was ordered to report to Commander Cruiser-Transport Force, at Hoboken, New Jersey. There for a month he instructed merchant captains who were to be commissioned in the Navy for command of certain vessels assigned the task of bringing our troops home from France. He then proceeded to the Boston Navy Yard, to command the USS Sigourney, which was completing major overhaul, and assumed command of that vessel, with additional duty in command of Destroyer Division SIX. About a year later that division was decommissioned and all personnel transferred to Destroyer Division TWENTY-SIX, USS Alden flagship. In February 1920 part of that division, destroyers Alden, Long and Smith Thompson, left Philadelphia, the Alden going to Constantinople, the other two to the Adriatic. Their Black Sea and Eastern Mediterranean duty completed a year later, they joined the three other ships of their division in Manila, Philippine Islands.

While on this Near East assignment, Captain Ancrum was ordered back to Constantinople from the Adriatic command to assist in handling the 130,000 White Russians who retreated from the Crimea (in about 120 vessels of all types) when the Bolsheviks suddenly took it over, via the ice, after an unexpected freeze. The Alden took aboard 982 fully equipped troops, an almost inconceivable number for so small a ship, landing them four of five miles up the Golden Horn, then backed the full distance to avoid making an 180° turn against a 6-knot tide in such narrow waters. He was then ordered to Cattaro Bay, Montenegro, to arrive in advance of these refugees, the first contingent of 20,000 which the Jugo-Slavs had agreed to care for.

For outstanding service in the Adriatic - Venice, Pola and Split - he was awarded the Italian decoration Order of St. Mark and St. Lazarus by the Government of Italy.

After his arrival in San Francisco in April 1921, Captain Ancrum was ordered to assume command of USS Tallahassee at Charleston, South Carolina. Detached a month later, he was named Naval Inspector of Ordnance, Homestead Steel Works, Munhall District, Pittsburgh, Pennsylvania. From December 1923 to May 1925 he served as Executive Officer of USS Utah, which took a diplomatic mission, of which General Pershing (with rank of Ambassador) was Head, around South America, primarily to attend the Lima, Peru, celebration in commemoration of the Battle of Ayacucho.

Captain Ancrum next commanded a regiment - one battalion from each of the battleships comprising Battleship Division TWO, Scouting Fleet, of which the New York was a unit, from May to August 1925. These men were sent ashore at the Naval Training Station, Hampton Roads, Virginia, to make room for the Naval Academy's Midshipmen for the annual summer cruise. He commanded USS Mercy, hospital ship, from September of that year until June 1926, and for a year thereafter was a student at the Naval War College, attending the Senior Course.

Reporting to Headquarters, Sixth Naval District, Charleston, South Carolina, on 22 June 1927, he served for two years as Captain of the Yard at the Charleston Navy Yard. He was then ordered to duty afloat, and for two years was Commanding Officer of USS Whitney, destroyer tender of the Scouting Fleet. On 29 July 1931, he reported as Marine Superintendent, Canal Zone. During his tour of duty, ending 21 October 1934, there occurred a slide in Gaillard Cut which stopped all transits for two days. Also, for the first time, the entire US Fleet made a continuous transit, requiring about two days, during which all other vessels were denied transit.

Captain Ancrum assumed command of USS Colorado, a unit of Battleship Division FOUR, Battle Force, on 4 December 1934. He was detached on 15 February 1936, and on 30 March reported to Headquarters, Fifth Naval District, Norfolk, Virginia, where he served for two years as Chief of Staff and Aide to the Commandant. He was relieved of all active duty and retired, after 40 years of Naval service, on 1 September 1938. Under orders of May 1941 he was recalled to active duty shortly before the United States entered the second World War, and served in active status as Port Director, Sixth Naval District, from 24 July 1941 through 12 March 1945. At his own request he was again relieved of all active duty.

He received a Letter of Commendation, with Ribbon, from the Secretary of the Navy for outstanding service as Port Director from July 1941 to March 1945. The commendation states: "Displaying exceptional leadership and administrative ability, Captain Ancrum supervised the control of all merchant ships, the Armed Guard and communication liaison groups aboard these vessels, using the ports within the Sixth Naval District. In addition, serving as Convoy and Routing Officer, Sixth Naval District, he planned the routing of all merchant vessels, hospital ships and certain naval auxiliaries and handled his duties in a manner far above that normally expected..."