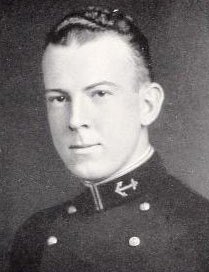 Allyn Cole, Jr., was born near Springfield, Colorado, and entered the Naval Academy upon appointment from the state in 1930. Graduating in 1934, he was assigned to the battleship Idaho for four years after which he was a Japanese language student, studying in Tokyo, Japan.

Between 1945 and 1947 he was Navigator of the battleship Wisconsin, followed by an assignment in the Operational Section, Naval Intelligence Division, office of the Chief of Naval Operation Head at the Armed Forces Security Agency, Washington, DC, and in March 1952 reported as Officer in Charge of the Naval Radio Station, Wahiawa, Oahu, Territory of Hawaii.

He was Commanding Officer of the Naval Communication Station Adak, Alaska, from January 1954 until the summer of 1955, and is now serving in the officer of the Secretary of Defense, Washington, D.C.

Date and Place of Birth: Near Springfield, Colorado 18, May 1912

Bronze Star Medal:   “For meritorious achievement while attached to the Division of Naval Communications, from December 7, 1941 to September 2, 1945. Discharging his important duties with skill and initiative, Commander Cole rendered invaluable assistance in carrying out the vital work of the Division of Naval Communications throughout a critical period in the history of our country. By his tireless efforts, outstanding professional ability and devotion to the fulfillment of an exacting assignment, he contributed to the prosecution of the war…”

Navy Unit Commendation: “For distinguished service… in support of military operations during the period from December 7, 1941 to September 2, 1945. By untiring and self-sacrificing devotion to duty, the members of the United States Naval Communication Intelligence Organization have rendered service vital to operations in all fields of combat and have contributed inestimably to the successful prosecution of the war…”

Promotions: Dates of rank only)