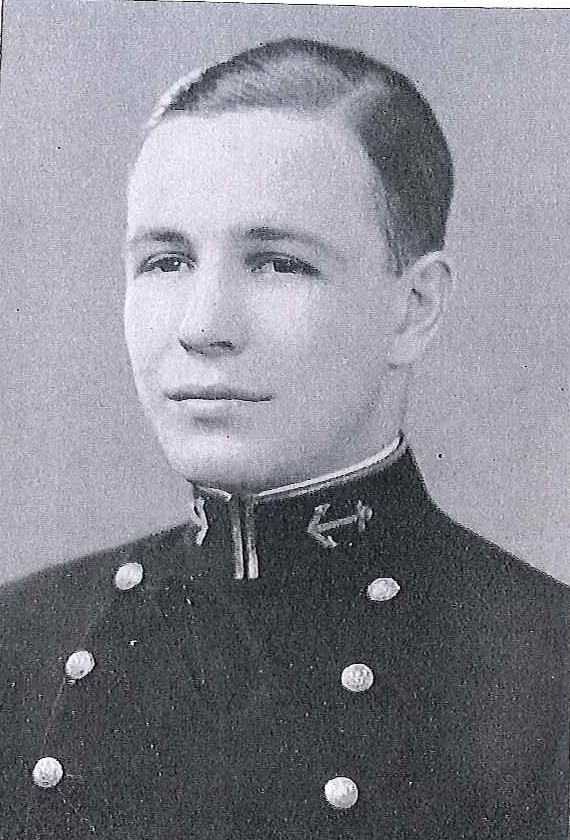 Richard Robert Ballinger was born in San Francisco, California, on September 18, 1906, son of Arthur W. and Dora Beatrice (Peters) Ballinger. He attended Polytechnic High School and Drews Coaching School, both in San Francisco, before his appointment to the US Naval Academy, Annapolis, Maryland, from his native state in 1925. As a Midshipman he participated in boxing, being manager and featherweight on the team. Graduated and commissioned Ensign on June 6, 1929 he subsequently advanced in rank to that of Captain to date from March 30, 1945.

After graduation from the Naval Academy in 1929, he joined USS Mississippi, in which he served as a junior division officer until February 1930. The following month he reported for duty as Communication Watch Officer on the staff of the Commander, Battleships, and was attached to USS West Virginia for four months. From June to December 1930 he served as Assistant Secretary to the US Electrical Mission to Nicaragua.

He completed flight training at the Naval Air Station, Pensacola, Florida, and was designated naval aviator on November 23, 1931. The next month he reported for duty as Assistant Flight Officer with Fighting Squadron 6, based on the aircraft carrier Saratoga, and from July to December 1932 again served as Assistant Secretary to the US Electoral Mission to Nicaragua. He returned to the Saratoga in January 1933 and again served as Assistant Flight Officer of Fighting Squadron 6.

From July 1934 to June he was Personnel and Communication Officer of Patrol Squadron 4, based on Pearl Harbor, TH., and while in that duty participated in the first mass flight from Pearl Harbor to Midway and return, pioneering a route used daily by commercial air lines. He next served until December 1937 as Maintenance and Personnel Officer for the Aviation Division aboard USS Arizona. Following that duty he reported for duty with Patrol Squadron 17, based at Seattle, Washington, serving as Maintenance Officer from January 1938 to June 1939, and making flights to Sitka, Dutch Harbor, and Kodiak, Alaska. The following month he was designated Maintenance Office of Patrol Squadron 24, based at Pearl Harbor, T.H.

Serving as Flag Secretary to Commander Patrol Wing 2, based at Pearl Harbor, he was present with his family on Ford Island, Pearl Harbor, at the time of the Japanese attack on December 7, 1941. After his detachment from duty in Pearl Harbor in June 1942, he assumed command of Instrument Training Squadron at the Naval Air Training Station, Corpus Christi, Texas, and served in that command until March 1943. For seven months thereafter, he served as Assistant Superintendent of Aviation Training at that station.

In November 1943 he joined USS Gambier Bay, then building at the Kaiser Shipbuilding Company, Incorporated, Vancouver, Washington. He served as Executive Officer of that carrier from her commissioning on December 28, 1943, until October 1944. The Gambier Bay participated in support operations during the invasion of Saip Tinian, Guam, Palau, Ulitthi and Leyte. She was sunk by Japanese surface forces in the second Battle of the Philippines Sea, on October 25, 1944. A Japanese cruiser was soon less than a mile away, as he went overside to remain in the water for forty-eight hours before a rescue was effected. For  heroism during that engagement he was awarded the Silver Star Medal, and its entitled to the ribbon for and facsimile of the Presidential Unit Citation awarded the USS Gambier Bay. The citations follow in part:

Silver Star Medal:  “For conscious gallantry and intrepidity as Executive Officer of the USS Gambier Bay, in action against enemy Japanese forces during the Battle off Samar, Philippines Islands, on October 25, 1944. Although his ship was under heavy enemy gunfire and was being hit continuously by eight-inch shells, (he) expertly directed the men in the interior of the ship in their efforts to handle numerous material casualties suffered by the vessel. When the abandon ship order was given, he…. Actively supervised the orderly abandonment despite raging fires and the imminent danger of major explosion… (and) held losses to a minimum in spite of continued enemy fire and two days of drifting in the sea…”

Presidential Unit Citation- USS Gambier Bay: “For extraordinary heroism in action against powerful units of the Japanese Fleet during the Battle off Samar, Philippines, October 24, 1944. Silhouetted against the dawn as the Central Japanese Force steamed through San Bernardino Strait toward Leyte Gulf, Task Unit 77.4.3 was suddenly taken under attack by hostile cruisers o  its port hand, destroyer o the starboard and battleship from the rear… The gallant ships of the Task Unit waged battle fiercely against the superior speed and fire power of the advancing enemy… The courageous determination and the superb teamwork of the officers and men who fought the embarked planes and who manned the ships of Task Unit 77.4.3 were instrumental in effecting the retirement of hostile force threatening our Leyte invasion operations…”

From January to October 1945 he severed as Executive Officer of the USS Belleau Wood, which participated in the attacks on, and invasions of, Iwo Jima and Okinawa; and all the attacks on the Japanese homeland by Task Forces Thirty Seven and Fifth Seven. He received a facsimile of, and the ribbon for, the Presidential Unit Citation awarded the Belleau Wood, “For extraordinary heroism in action against enemy Japanese forces in the air, ashore and afloat in the Pacific War Area from September 18, 1943 to August 15, 1945.

In December 1945 he reported for duty as Director of Service Test, Naval Air Test Center, Patuxent River, Maryland. On May 28, 1948, he was ordered detached and to duty as Chief of Staff and Aide to Commander, Fleet Air Wing Four, and while in that assignment had additional duty as Chief of Staff to Commander Fleet Air, Seattle, and three months duty in 1949 in the same capacity on the staff of Commander Fleet Air Wings, Pacific. In June 1950, he reported to the Navy Department, where for eighteen months he served as Head, Military Requirements and New Developments, Air Warfare Division, in the Office of the Chief of Naval Operations, with additional duty as Director, Military Requirements Division, in the Bureau of Aeronautics.

From January to October 1952 he was Commanding Officer of USS Kula Gulf (CVE-108), after which he was ordered to the Joint Staff, Office of the Joint Chiefs of Staff, and assigned to Senior Plans Team. From July 1955 to April 1957 he was attached to the Joint Staff of the Commander in Chief, US Atlantic Fleet as US Liaison Officer to the Supreme Allied Commander Atlantic. On April 30, 1957 he became Commanding Officer of the Naval Air Station, Seattle, Washington.