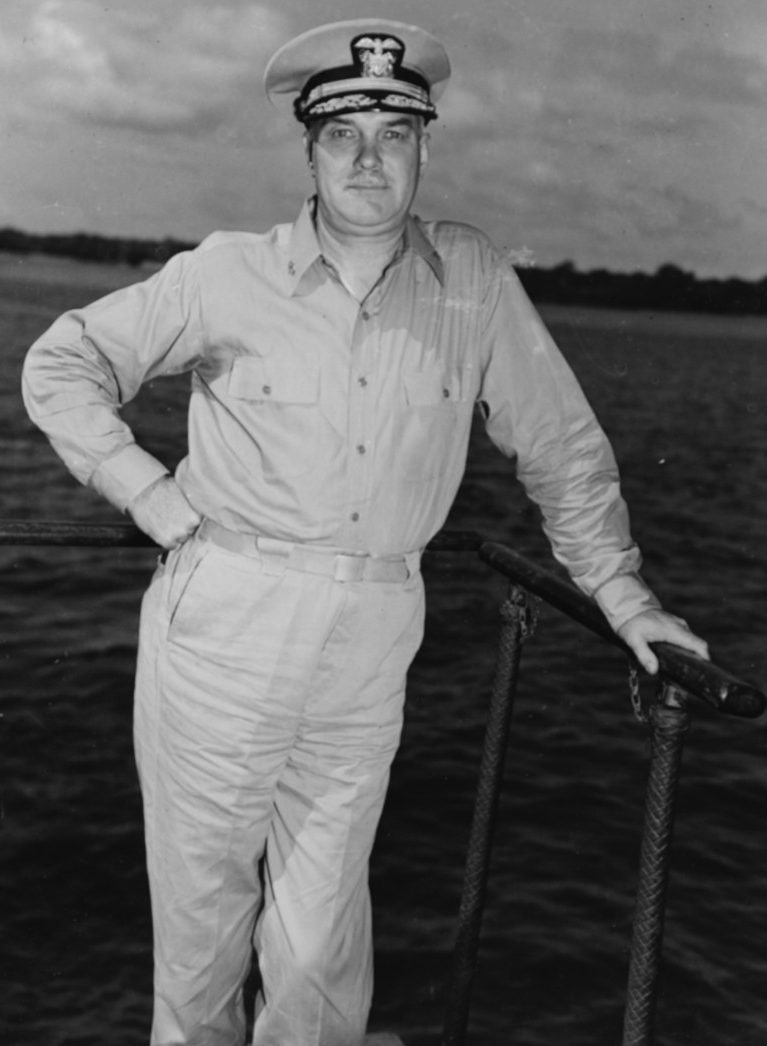 Walden Lee Ainsworth was born in Minneapolis, Minnesota, on 10 November 1886, son of William Green Ainsworth and the former Mary Lee Walden. He comes of Colonial New England stock with both military and naval forbears, Daniel Ainsworth having served in the Connecticut Militia during the Revolution, and Steward (later Lieutenant, Continental Navy) Jacob Walden sailed with John Paul Jones in the Ranger to engage the Drake. He was graduated from Central High School in Minneapolis, and completed his Freshman year at the University of Minnesota, in Minneapolis, before his appointment to the United States Naval Academy from the Fifth District of Minnesota in 1906.

While a Midshipman, he was a member of the crew for three years and was Captain his First Class year. Graduated in June 1910, he served at sea for the two years then required by law before commissioning, and was commissioned Ensign on 7 March 1912. During World War I he served in the temporary ranks of Lieutenant and Lieutenant Commander and was commissioned in the latter rank to date from 3 June 1921. He subsequently progressed in grade to the rank of Rear Admiral to date from 2 December 1941. On 1 December 1948, he was transferred to the Retired List of the US Navy and was advanced to the rank of Vice Admiral on the basis of combat awards.

Following graduation from the Naval Academy in June 1910, he served in the USS Idaho and the USS Prairie until the spring of 1914, when he was assigned to the USS Florida. He served as Battalion Adjutant from that battleship during the occupation of Vera Cruz, Mexico, on 21-22 April 1914. In May 1917 he was detached from the Florida and had duty throughout World War I, and until February 1919, on board the USS De Kalb; and as Gunnery Officer of the USS America (ex-German liner Amerika) and the USS Frederick.

In the rank of Lieutenant Commander he next reported to the Inspector of Ordnance, Naval Armor and Projectile Plant, Charleston, West Virginia, where he had duty from February 1919 to March 1921. Returning to sea, he served consecutively as Executive Officer of the USS Hancock and the USS Birmingham, and in September 1922 reported for duty with the Destroyer Squadrons, Pacific Fleet, assigned as Commanding Officer of the USS Marcus. He served in that command for a year before his detachment for duty as Naval Inspector of Ordnance, Munhall District, Pittsburgh, Pennsylvania, from November 1923 until August 1924. He was then ordered to the Navy Yard, New York, NY, where he remained on duty until November 1925.

Ordered to Asiatic Station for assignment, he reported in January 1926 as Squadron Gunnery Officer on the Staff of the Commander Destroyer Squadron, Asiatic Fleet, the USS Black Hawk, flagship. In July 1927 he assumed command of the USS Paul Jones, and after a year in that command served from September 1928 until June 1931 as an instructor in the Department of Navigation at the Naval Academy. For two years thereafter he was at sea, serving first as Navigator of the USS Idaho and later the USS Pensacola, operating with Battleship Division 2, Battle Force, and Cruiser Division 4, Scouting Force, respectively.

From June 1933 until May 1935 he was District Communications Officer for the Fifteenth Naval District, Balboa, Canal Zone, and after completing the senior course at the Naval War College, Newport, Rhode Island, Commander Ainsworth reported in June 1936 as Executive Officer of the USS Mississippi, and remained on board that battleship for two years. Now advanced to the rank of Captain, he served from July 1938 until July 1940 as Professor of Naval Science and Tactics, Naval Reserve Officers Training Corps Unit, Tulane University, New Orleans, Louisiana. He then served as Commander Destroyer Squadron 2, from 22 July 1940 until 19 December 1941, and the next day assumed command of the USS Mississippi, then operating in the Atlantic.

Under his command in the early period of World War II, the Mississippi was transferred to the Pacific Area. On 4 July 1942, he first broke his Flag as Commander Destroyers, Pacific Fleet, and Commander Destroyer Flotillas 1 and 2, and on 10 December 1942, he was assigned additional duty as Commander Task Force 67. Detached from that assignment on 8 January 1943, he served until October 1944 as Commander Cruiser Division 9 and as Commander Task Force 18 in the South Pacific under Admiral Halsey. For his services in the Solomons Campaign, and as Commander of other Task Forces and Groups in the Marianas, Palaus, and Leyte Campaigns, he was awarded the Navy Cross, Distinguished Service Medal, and Legion of Merit; and is entitled to the Ribbon for, and a facsimile of the Navy Unit Commendation awarded his flagship, the USS Honolulu, which was a unit of Cruiser Division 9. The citations follow:

Navy Cross: "For extraordinary heroism and distinguished service in the line of his profession as a Task Force Commander during the engagements with Japanese land and naval forces in the vicinity of Kula Gulf, British Solomon Islands, on July 5 and 6, 1943. On the first mentioned date, Rear Admiral Ainsworth gallantly led his task force into the restricted and submarine infested waters where, in the face of enemy gun and torpedo fire, he directed the bombardment of shore batteries and installations which covered the landings by our troops. Twenty-four hours later, he again led his ships against a Japanese force of approximately ten vessels. The skillful and accurate fire of his task force sank or severely damaged all of the enemy units. His outstanding leadership, brilliant tactics and courageous conduct throughout the engagements contributed immeasurably to the destruction of the enemy forces and was in keeping with the highest traditions of the United States Naval Service."

Distinguished Service Medal: "For exceptionally meritorious and distinguished service to the Government of the United States in a position of great responsibility as Commander, task Forces operating as a part of the South Pacific Force, US Pacific Fleet, during the period December 10, 1942 to July 18, 1943. Constantly subjected to enemy submarine, surface and air attacks, the forces under Rear Admiral Ainsworth's command conducted many offensive operations which included repeated bombardments of enemy installations, the hazardous interception and resultant defeat of Japanese task forces, culminating in the two successful night engagements in Kula Gulf in July...(reflecting) great credit upon his forceful and inspiring leadership, and upon the United States Naval Service."

Legion of Merit: "For distinguishing himself by exceptionally meritorious conduct in the performance of outstanding service in July 1944, during the assault and occupation of Guam Island, Rear Admiral Ainsworth commanded the fire support group which bombarded the objective prior to, during and subsequent to the assault by our forces. By his personal leadership, his skillful handling of the ships under his command, and his thorough knowledge of amphibious fire support problems he caused his ships to render accurate and devastating naval gunfire support to our assault troops, and contributed in a large degree to the successful capture of the island..."

Navy Unit Commendation to the USS Honolulu: "For outstanding heroism in action against enemy Japanese forces during the Battle of Tassafaronga, November 30, 1942; the Battle of Kula Gulf and Kolombangara, July 5 and 13, 1943; and operations at Palau and Leyte, September 12 to October 20, 1944. Fighting valiantly in the night action of Tassafaronga, the USS Honolulu sank one enemy destroyer and, while skillfully avoiding enemy torpedoes, assisted in defeating the remaining units of the hostile force in their mission of landing supplies and troops on this base. During the Solomon Islands Campaign, she led a task force in frequent high-speed night sweeps up the Slot and, on each of the nights of July 5 and 13, intercepted a Japanese cruiser-destroyer force near Kula Gulf and assisted in sinking one of the cruisers and two destroyers and in damaging five more destroyers. As part of the surface forces supporting our invasion of the Southern Palau Islands and Leyte, Philippine Islands, the Honolulu effectively bombarded Japanese installations which threatened our transports and, by her accurate and intense gunfire, furnished excellent close-in support for the landing and advances of our troops...(rendering) distinctive service, sustaining and enhancing the finest traditions of the United States Naval Service."

Two other cruisers of Cruiser Division 9, the USS Helena and USS St. Louis, also received the Navy Unit Commendation. In addition, of the destroyers attached to Admiral Ainsworth's Task Force in the Solomons, three, the USS Nicholas, the USS O'Bannon and USS Radford were awarded the highest individual decoration, the Presidential Unit Citation.

As Admiral King brought out in his Annual Report as Chief of Naval Operations, the losses and subsequent defeat of the Japanese surface forces in these night actions in the Solomons - they also lost six submarines - was not accomplished without severe losses of our own. The USS Helena was sunk by enemy torpedoes during the Battle of Kula Gulf; and the destroyers Strong and Gwin were also lost to Jap torpedoes in other Task Force actions. The destroyer De Haven was bombed and sunk while operating independently off Guadalcanal. In addition, the USS Honolulu, the USS St. Louis and HMNZS Leander suffered torpedo damage; and the St. Louis and HMNZS Achilles were bombed by Jap aircraft.

From 31 October 1944 until 13 July 1945, Admiral Ainsworth was Commander Cruisers and Commander Destroyers, US pacific Fleet, and for "exceptionally meritorious" service in that capacity was awarded a Gold Star in lieu of the second Legion of Merit, with citation, in part, as follows:

Gold Star in lieu of Second Legion of Merit: "...He displayed exceptional ability and aggressiveness in handling the organization and administration of the cruisers, destroyers, destroyer escorts and patrol frigates under his command during a period when those ships were playing a most vital part in an unprecedented offensive against a ruthless and fanatic enemy. His sound judgment and experience were of great value in providing for the servicing of those ships in Forward Areas. In addition, he handled the countless detailed problems of his command, including the supervision of training programs, with the greatest efficiency..."

Returning to the United States, he reported on 22 August 1945 as Commandant of the Fifth Naval District and Commander, Naval Operating Base, Norfolk, Virginia, where he served until relieved of all active duty pending his retirement on 1 December 1948. Vice Admiral Ainsworth died at Naval Hospital, Bethesda, Maryland, on 7 August 1960; was buried at Arlington National Cemetery after service at Ft. Myer Chapel on 11 August 1960.