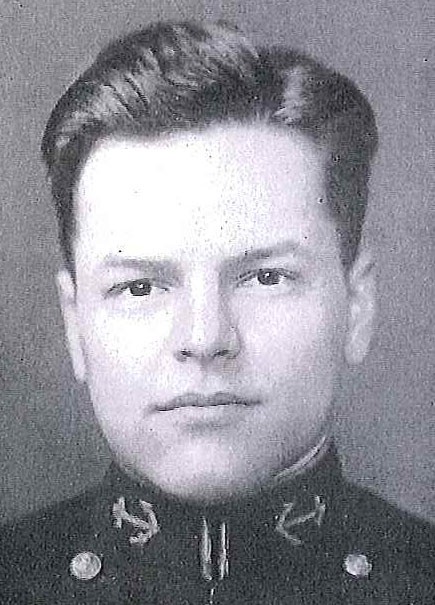 Robert Wiman Carter was born in Grand Forks, North Dakota, on April 11, 1916, son of Leon M. and Dale (Wiman) Carter. He attended grade and high schools in Grand Forks and in 1934 entered the US Naval Academy, Annapolis, Maryland, on appointment from his native state. Graduated and commissioned Ensign on June 2, 1938, he transferred to the Supply Corps of the US Navy on June 20, 1940, and subsequently advanced in rank of that of Captain, to date from July 1, 1956.

Following graduation from the Naval Academy in 1938, he joined USS New Mexico and in May 1940 was detached from that battleship and assigned to the Bureau of Supplies and Accounts, Navy Department, Washington, DC from September 1940 until March 1941 he was a student at the Naval Supply and Finance School, Navy Yard, Philadelphia, Pennsylvania, after which he had duty as Division Disbursing Officer on the staff of Commander Destroyer Division Four, attached to the destroyers Walke and later the Russell. He was serving in that capacity when the United States entered World War II.

In October 1943 he joined USS Chandeleur and while on board that seaplane tender saw action during the Treasury-Bougainville operations; the capture and occupation of Saipan and the southern Palau Islands; the assault and occupation of Okinawa Gunto and the Third Fleet operations against Japan. He received a Letter of Commendation, with authorization to wear the Commendation Ribbon, from the Commander in Chief, US Pacific Fleet and was cited as follows:

“For meritorious service… as Supply Officer of the USS Chandeleur during operations against the enemy from February 29, to December 16, 1944. Through his outstanding ability and devotion to duty he organized and supervised the Supply Department in such a manner that it functioned efficiently under the trying conditions prevailing in the forward areas where his ship operated during the Marianas and Palau Campaigns. By his efficient performance of duty he was able to furnish the necessary critical spare parts to the airplane squadrons supported by his ship, thereby contributing materially to the success of the operations against the enemy…”

Detached from the Chandeleur in September 1945, shortly after the cessation of hostilities, he had instruction in industrial accounting at the Graduate School of Business Administration, Harvard University, Cambridge, Massachusetts. He was Fiscal Officer in the Eleventh Naval District with headquarters in San Diego, California, from June to August 1946 and followed similar duty at the Naval Air Station, San Diego, he reported in August 1948, for instruction at the Industrial College of the Armed Forces, Washington, DC. He continued instruction, June- September 1949, at the Air Force Comptrollers School, Selma, Alabama and in October became Director of the Accounting Administration Division, Bureau of Supplies and Accounts, Navy Department. He remained there until August 1950, when he was assigned to the Field Systems and Control Branch, Office of the Comptroller, Navy Department.

Between July 1951 and June 1953 he served as Supply and Fiscal Officer at the Naval Station, Rodman, Canal Zone, after which he had similar duty at the Submarine Base, New London, Connecticut. In July 1955 he reported as Supply Officer on the staff of Commander Destroyer Force, US Atlantic Fleet and in November 1957 became Comptroller in the Bureau of Supplies and Accounts, Navy Department.