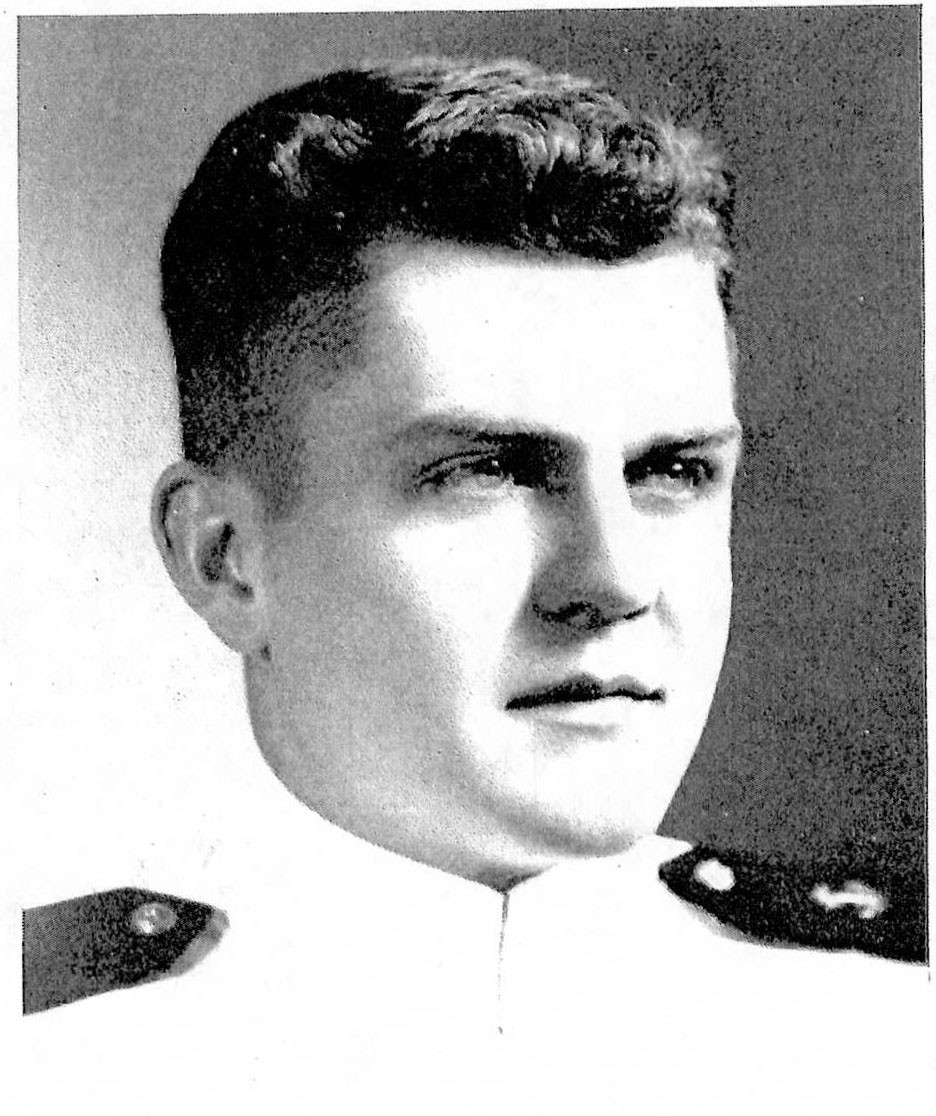 James Bond Stockdale was born in Abingdon, Illinois, on December 23, 1923, son of V.B. and Mabel (Bond) Stockdale both now deceased. He attended Knox College, Galesburg, Illinois and Monmouth (Illinois) College, prior to entering the U.S. Naval Academy, Annapolis, Maryland, on appointment from his native state in 1943. Graduated with the Class of 1947 on June 5, 1946 (accelerated course due to World War II), he was commissioned Ensign and subsequently advanced in rank to that of Rear Admiral, to date from May 1, 1974.

Following graduation from the Naval Academy in 1946, he joined USS Carmick (DMS-33) as Assistant Gunnery Officer and in October 1946 transferred to USS Thompson (DMS-38) to serve as Assistant Engineer. In February 1947, he reported as Communications Officer of USS Charles H. Roan (DD-853) and from July 1948 to June 1949 continued duty afloat as Executive Officer of the USS PCS-1392. He next had flight training at several naval air facilities, including the Naval Air Station, Pensacola, Florida and in September 1950 was designated Naval Aviator. He had further training at Fleet Airborne Electronics Training Unit, US Atlantic Fleet and in January 1951 was assigned to Air Antisubmarine Squadron TWENTY-SEVEN.

From September 1951 to January 1952 he had landing signal officer training at the Carrier Qualification Training Unit FOUR at the Naval Auxiliary Air Station, Corry Field, Pensacola, Florida, then returned to Antisubmarine Squadron TWENTY-SEVEN for duty as Landing Signal Officer and Safety Officer. Assigned in January 1954 to the Naval Air Test Center, Patuxent River, Maryland, he had test pilot training and after completing his instruction remained as an Instructor (academic and flight) until January 1957. He then joined Fighter Squadron TWO HUNDRED ELEVEN to serve as Maintenance and Operations Officer and in March 1959 became Executive Officer of Fighter Squadron TWENTY-FOUR. Early in 1960, he became the first man to log over one thousand hours in an F-8 Crusader.

He reported in September 1960 for postgraduate instruction at Stanford (California) University, from which he received the degree of Master of Arts in International Relations in 1962. In September of that year, he joined Fighter Squadron FIFTY ONE, embarked in USS Ticonderoga (CVA-14) as Executive Officer and in September 1963 assumed command. He was awarded the Distinguished Flying Cross. The citation follows in part:

He is also entitled to the Ribbon for and a facsimile of the Navy Unit Commendation awarded the USS Ticonderoga.

In November 1964, he joined Carrier Air Wing TWELVE as Operations Officer and in February 1965 assumed command of Carrier Air Wing SIXTEEN, which operated off USS Oriskany (CVA-34) in the combat zone. For outstanding services while commanding the latter, he was awarded the Legion of Merit and a Gold Star in lieu of the Second Distinguished Flying Cross. The citations follow in part:

Legion of Merit:  “For exceptionally meritorious conduct . . . during operations against enemy aggressor forces in North and South Vietnam…from May to September 1965…Through his courage, dedication and administrative skills, Captain Stockdale forged a formidable fighting team, which successfully completed all assigned missions in the face of determined enemy resistance, thus contributing greatly to the success of friendly forces engaged in the Vietnamese Campaign… “

Gold Star in lieu of the Second Distinguished Flying Cross:   “For heroism and extraordinary achievement…on July 2, 1965…during aerial combat operations in Southeast Asia. As Strike Coordinator, (he) planned and coordinated a highly successful aerial strike against the petroleum storage area at Nam Dinh, North Vietnam. . . His efficient pre-strike planning and scene-of-action coordination contributed significantly to the destruction of eight petroleum storage tanks and severe damage to associated buildings and equipment. . . “

He was also awarded the Air Medal with Numeral “10” (First through Tenth Strike/Flight Awards) “for meritorious achievement in aerial flight. . .serving as Commanding Officer of Fighter Squadron FIFTY-ONE during the months of June, July, August, and October 1964; and as Commander Attack Carrier Air Wing SIXTEEN…from May 8 to September 9,1965. . .” In addition, he is entitled to the Ribbon for and facsimile of the Navy Unit Commendation awarded the USS Oriskany (CVA-34).

As Commander Attack Carrier Air Wing SIXTEEN, he was shot down on September 9, 1965, while flying an A-4 (Skyhawk) on a bombing mission over North Vietnam. Taken a prisoner, he was imprisoned at Hoalo Prison, North Vietnam, until released on February 12, 1973. In 1973, he received the Navy League’s John Paul Jones Award for inspirational leadership, which he accepted on behalf of all POWs. He was next under treatment at the Naval Hospital, San Diego, California and in January 1974 assumed command of Antisubmarine Warfare Wing, Pacific.