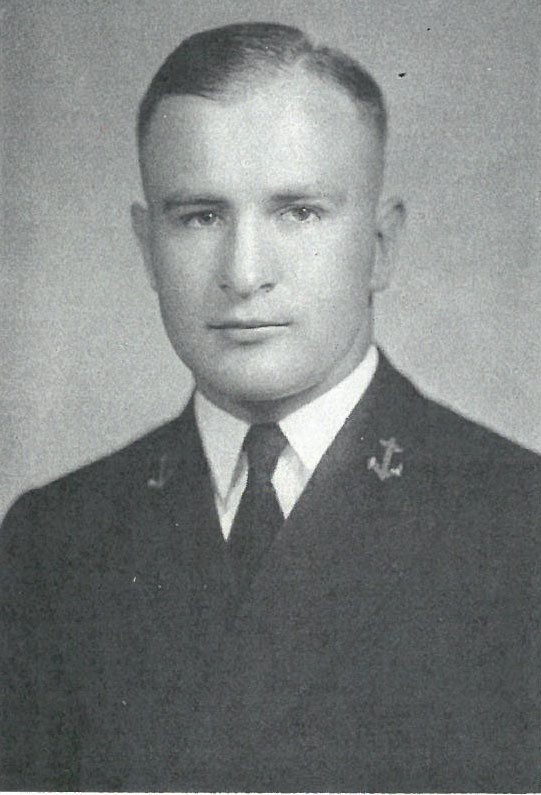 Leonard James Baird was born in DeWitt, Iowa, attended high school there, and in 1931 entered the Naval Academy. He was graduated with the Class of 1935 and subsequently had duty until the summer of 1939 in the battleship Colorado and the destroyer Case. He was attached to the cruiser Helena, tied up at Pearl Harbor, when the Japanese attacked the Naval Base there on December 7, 1941. Severely damaged during the attack, she was repaired to return to the battle area, participating in the capture and defense of Guadalcanal; action at Cape Esperance (Second Savo) and Guadalcanal (Third Savo); the consolidation of the Southern Solomon Islands; New Georgia group operations and Kula Gulf action. She was sunk during the latter engagement as a result of enemy torpedo hits. He is entitled to wear the Navy Unit Commendation Ribbon awarded the USS Helena for “outstanding heroism” during the night Battle of Cape Esperance, October 11-12, 1943, Battle of Guadalcanal (Third Savo), November 12-13, 1942 and the fatal action in Kula Gulf on July 5, 1943.

During 1943 and 1944 he was Gunnery and Material Officer on the staff of Commander Cruiser Division 6, under Vice Admirals Giffen and Joy and in that assignment saw action during the Marshall, Gilbert and Marianas Islands campaigns. He was awarded the Bronze Star Medal for “meritorious achievement” during action against enemy Japanese forces in the Pacific War Area from October 16, 1943 to April 7, 1944. Completing a tour of duty as Ordnance Officer at the Naval Ammunition Depot, Hawthorne, Nevada, he was given his first command in July 1946, the destroyer Goodrich, on occupation duty in the Far East and later in the Mediterranean.

Between 1948 and 1951 he was attached to the Officer Detail Section in the Bureau of Naval Personnel, Navy Department, after which he was a student at the Industrial College of the Armed Forces. For two year, 1952-1954, he had duty as Gunnery and Training Officer and Commanding Officer Staff Administration Personnel on the staff of Commander Service Force, US Atlantic Fleet. In July 1954 he became Commander Destroyer Division 282, operating in the Atlantic and Far East, and since the summer of 1955 has been in command of the Service School Command, Naval Training Center, Great Lakes, Illinois.

Bronze Star Medal: “For meritorious achievement as Gunnery Officer on the staff of the Commander of a Cruiser Division during action against enemy Japanese forces in the Pacific War Area from October 16, 1943 to April 7, 1944. Participating in numerous engagements and campaigns during this critical period, (he) rendered invaluable service to his Division Commander during the successful assaults on the Gilbert, Marshall, Caroline and Mariana Islands…”

Navy Unit Commendation (USS Helena): “For outstanding heroism in action against enemy Japanese forces afloat in the Solomon Islands, New Georgia Areas. Gallantry carrying the flight to the enemy, the USS Helena opened the night Battle of Cape Esperance on October 11-12, 1942, boldly sending her fire into the force of enemy warships, sinking a hostile destroyer and holding to a minimum the damage to out destroyers in the rear of the Task Force. She engages at close quarters a superior force of hostile combatant ships in the Battle of Guadalcanal (Third Savo) in the night of November 12-13, 1942, rallying our forces after the Flagship had been disabled and contributing to the enemy’s defeat. In her final engagement in the pre-dawn battle of July 5, 1953, the Helena valiantly sailed down the restricted and submarine infested waters of Kula Gulf under the terrific torpedo and gun fire of the enemy to bombard Kolombangara and New Georgia while covering the landing of out troops at Rice Anchorage and twenty-four hours later, her blazing guns aided in the destruction of a vastly superior enemy naval force before she was fatally struck by a Japanese torpedo…”