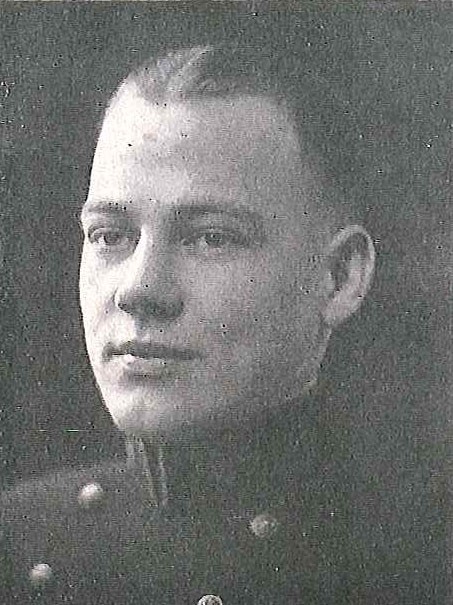 Elmer Edward Berthold was born in Ballwin, Missouri, on May 8, 1901. He entered the US Naval Academy, Annapolis, Maryland, from his native state in 1920, and on June 2, 1924 was graduated and commissioned Ensign. Advancing progressively in rank he attained that of Captain to date from July 10, 1943.

Upon graduation from the Naval Academy in 1924, he served until September 1927 in USS Oklahoma, followed by further sea duty until May 1931 in the battleship Wyoming, the cruisers Rochester and Galveston, the gunboat Fulton and the converted yacht Niagara, respectively. Detached from the latter he returned to the United States and attended courses in general line and applied communications at the Postgraduate School, Annapolis, Maryland. Completing his instruction in May 1933, he then joined USS Cincinnati.

For a year he served as Radio Officer on the staff of Commander Cruiser Division THREE, Battle Force, US Fleet, and in June 1935 transferred, in a similar capacity, to the staff of Commander Cruiser Division FOUR, Battle Fleet. In August 1936 he was assigned to the Office of the Chief of Naval Operations, Navy Department, Washington, DC, and in June 1938 reported aboard USS Tennessee.

Ordered to the Eleventh Naval District, San Diego, California, he was in charge of the reactivation of USS King and assumed command of that destroyer upon her commissioning on September 26, 1939. He commanded her until February 1941, when he joined USS West Virginia and was aboard that battleship at Pearl Harbor, Territory of Hawaii, when the Japanese attacked the Naval Base there on December 7, 1941. The West Virginia was sunk in her berth as a result of torpedo hits and fire.

He received a Letter of Commendation, with authorization to wear the Commendation Ribbon and Combat “V,” for “meritorious service…in connection with salvage operations on Naval vessels damage by heavy enemy action in Pearl Harbor, on December 7, 1941. The citation further commends him for “His outstanding performance of duty under arduous and at times hazardous conditions contributed in a large measure to the success of these operations and to the effectiveness of the was effort.”

After the sinking of the West Virginia he was ordered to return to the United States and in March 1942 was again assigned to the Office of the Chief of Naval Operations, Navy Department. He remained until 1944, followed by duty as Commanding Officer of USS San Saba. Detached from command of that transport in the summer of 1946, he then became District Communications Officer, Eighth Naval District, with headquarters in New Orleans, Louisiana.

He served as Communications Plans Officer on the staff of the Commander in Chief, Naval Forces, Eastern Atlantic and Mediterranean, from August 1948 to August 1951, when he reported as Director of the Communications Department, Western Sea Frontier, his present duty.