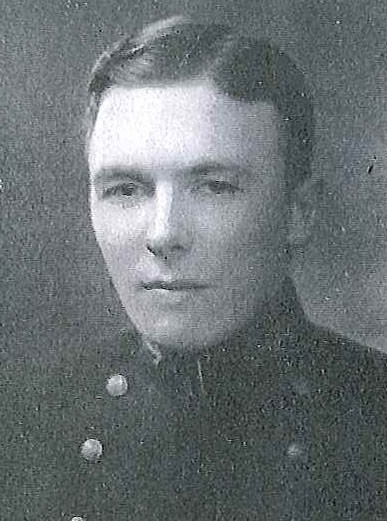 Lieutenant Commander Carpenter was born on September 15, 1909, in Iron Mountain, Michigan, the son of Gilbert Vilas Carpenter and Mrs. Leonore Crowell Carpenter. He attended Iron Mountain High School and the Severn Preparatory School, Severna Park, Maryland, before his appointment to the US Naval Academy, Annapolis, Maryland, from the Eighth District of his native state in 1926. Graduated and commissioned Ensign on June 5, 1930, he advanced through the grades to the rank of Lieutenant Commander, to date from January 1, 1942.

Following graduation from the Academy in 1930, Lieutenant Commander Carpenter was assigned to the Naval Air Station, Pensacola, Florida for training, between July 1930 and July 1932, interspersed with duty from August 1930 to April 1931 aboard USS Tennessee. Designated a Naval Aviator on April 28, 1932, he reported, in July 1932, for duty with Scouting Squadron One-B, based consecutively aboard the carriers Langley and Ranger. He returned to Pensacola, in June 1935, for two years’ duty and in June 1937 was assigned fitting out duty in USS Enterprise at the Newport News Shipbuilding and Dry Dock Company, Newport News, Virginia. Before the Enterprise was commissioned he was detached, in September 1937, and had service until April 1938 with Scouting Squadron SIX.

Again assigned fitting out duty in the Enterprise, Lieutenant Commander Carpenter joined her upon her commissioning on May 12, 1938. He remained aboard that carrier until February 1940, but during the latter part of that period, from August 1939 was attached to Torpedo Squadron Six. Following duty at the Naval Air Station,’ San Juan, Puerto Rico, which extended to April 1942, he reported for duty with the Advanced Carrier Training  Group, Atlantic Fleet, Norfolk, Virginia.

Lieutenant Commander Carpenter was killed in a plane crash near the Naval Air Station, Norfolk, Virginia, on May 18, 1942.

He was entitled to the American Defense Service Medal, Fleet Clasp; the American Campaign Medal; and the World War II Victory Medal.