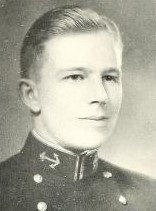 William Charles Fortune was born on March 1, 1911, in Salamanca, New York, son of Arch William and Amy (Hardendorf Fortune. He attended Nottingham High School, Syracuse, New York and Massena (New York) High School, before entering the US Naval Academy, Annapolis, Maryland, from the Thirty First District of his native state in 1929. As Midshipman he won his letters in boxing, gym, and soccer, played class football and lacrosse and was a senior lifeguard. Graduated and commissioned Ensign on June 1, 1933, he subsequently advanced in rank of that Captain, to date from January 1, 1952.

Following graduation from the Naval Academy in 1933, he joined the USS Texas and in June 1935 was assigned duty as an Aircraft Gunnery Observer with Observation Squadron One-B attached to the USS Texas. Detached from that battleship in February 1936, he was ordered to the Naval Air Station, Pensacola, Florida, for flight training, and on March 23, 1937 was designated Naval Aviator.

In May 1937 he joined Observation Squadron Four-B, based on board the USS Saratoga, and in July of the same year transferred to Scouting Squadron Forty-Two, attached to the USS Ranger. While so serving he became a member of the Caterpillar Club, after a collision in mid-air, with another plane engaged in gunnery exercise on August 8, 1937. For a year, June 1938-June 1939, he had duty with Cruiser Scouting Squadron Seven, attached to the USS San Francisco, and while he was on board that cruiser, he made a good-will cruise around South American in 1939.

Ordered to return to the United States in June 1939, he reported for instruction in aeronautical engineering at the Postgraduate School, Annapolis, Maryland. He continued the course at the Massachusetts Institute of Technology at Cambridge, from which he received the degree of Master of Science in 1942. In June of that year he was assigned to the Naval Aircraft Factory, Philadelphia, Pennsylvania, and remained there until September 1943. The next month he joined the staff of Commander Aircraft, US Pacific Fleet, as Ship Installation and Assistant Ship Material Officer, with additional duty at the Navy Yard, Pearl Harbor, Territory of Hawaii. Early in 1944, he led a flight of replacement planes from Espirtu Santo to Guadalcanal. He received a Letter of Commendation, with authorization to wear the Commendation Ribbon, from the Commander in Chief, US Pacific Fleet, “For outstanding service…” while serving on the staff of Commander Aircraft, Pacific Fleet. The citation further states in part:

“With exceptional ability and administrative skill in a position of great responsibility he aided in promoting and maintaining the high state of material readiness of our carriers, aircraft tenders, and other vessels assigned to the Air Force, Pacific Fleet during the period October 1943 to April 1945…”

He was again assigned, in May 1945, to the Naval Aircraft Factory, Naval Material Center, Philadelphia, continuing to serve there until July 1948, when he became Bureau of Aeronautics Representative at the General Tire and Rubber Company, Pasadena, California. Following a month’s temporary duty at the Naval Air Station, San Diego, California, he reported in November 1950, as Assistant Chief for Logistics on the staff of Commander Fleet Air, Japan in that assignment he flew with patrols in the Sea of Japan and Yellow Sea during the Korean hostilities and was on board a PBW that flew through the cable trap in the Korean Islands. He received a second Letter of Commendation, with authorization to wear the Bronze Star on his Commendation Ribbon, from the Commander Naval Forces, Far East. The Citation follows:

“During the period 21 November 1950 to 24 March 1951, Commander Fortune as Assistant Chief for Logistics performed services of great value to the Commander Fleet Air, Japan, enabling him to meet the contingencies resulting from the unprovoked Communists attack against the Republic of Korea. Working through long hours and handicapped by a limited staff, Commander Fortune contributed materially to the solving of logistic problems created by rapid build-up of Naval and Marine aviation units in the Far East.”

During the period March to August 1951, he was hospitalized in Tokyo, Japan and Oceanside, California, after which he had duty as Head of the Aerodynamics Laboratory at the David W. Taylor Model Basin, Carderock, Maryland. He remained there until July 1954, the reported as Head of the Air Branch in the office of Naval Research, Navy Department, Washington, DC. In September 1956 he became Assistant Bureau of Aeronautics General Representative, Central District, with headquarters in Los Angeles, California, and while there had five and a half months duty as Acting Bureau of Aeronautics General Representative. Assigned in August 1958 to the Bureau of Aeronautics, Navy Department, he was Component Development Officer until June 1959 and the next month assumed command of the Naval Air Test Facility (Ship Installation), Naval Air Station, Lakehurst, New Jersey. He served at the National Aeronautics and Space Administration George C. Marshall Space Flight Center, Huntsville, Alabama from October 1962 until ordered detached in June 1963 for duty with Mississippi Test Operations, National Aeronautics and Space Administration George C. Marshall Space Flight Center, at Gainesville, Mississippi.

Captain Fortune was Eastern Regional Representative to the National Council, Institute of Aeronautical Science (1954-1955); Delegate to the Montgomery County (Maryland) Civic Federation (1953-1954); Treasurer and Vice President of the Bannockurn Citizens Association; a member of the Usher and Architectural Committees of the Church of the Redeemer, Bethesda, Maryland and his name appeared in Who’s Who in the East (1952- 1956). His an Associate Fellow of the Institute of Aeronautical Sciences.