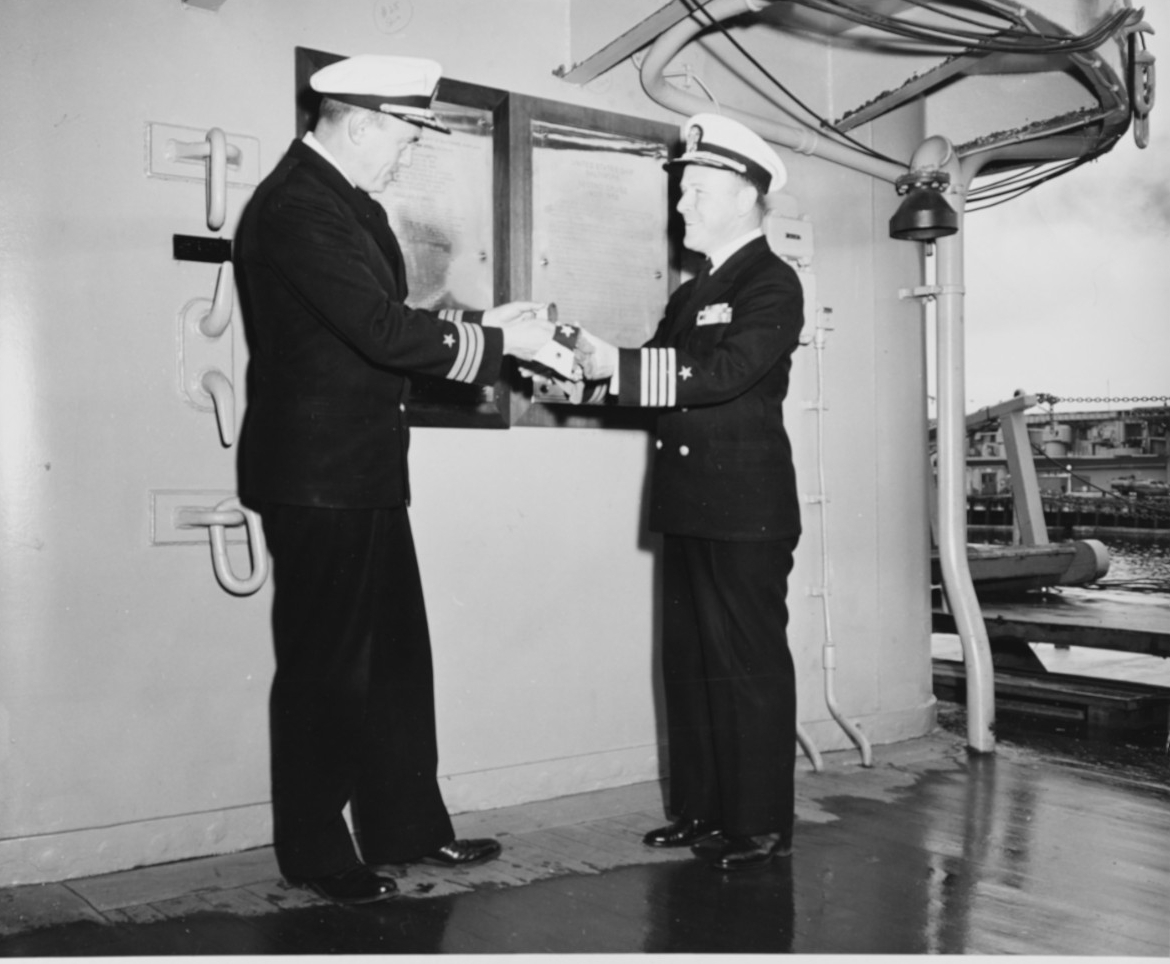 Ship's Commanding Officer, Captain Scarritt Adams, USN, (right) receiving her commissioning pennant from his Executive Officer, Commander G.M. Boyd, following her final decommissioning ceremonies. Taken on board at the Puget Sound Navy Yard, 31 May 1956. Note plaques behind the two officers. That at left is a historical data plaque. The other concerns her Second Cruise, 1951-1956. Official U.S. Navy Photograph, from the Collections of the Naval History and Heritage Command.

Scarritt Adams was born in St. Louis, Missouri, on 9 March 1907, son of H. Coolidge and Louise (Scarritt) Adams. He attended Saltus Grammar School, Bermuda, and the Massachusettts Institute of Technology at Cambridge (1925-1926), before entering the US Naval Academy, Annapolis, Maryland, from the state of New York in 1926. As a Midshipman he played soccer and plebe water polo. Graduated and commissioned Ensign on 5 June 1930, he subsequently attained the rank of Captain to date from 1 July 1949, having served in that rank (temporary) from 10 December 1945 to 1 December 1947.

Following graduation from the Naval Academy in 1930, he joined USS Marblehead, and when detached in June 1932 returned to tho United States for fitting out duty in USS Indianapolis. He was aboard that cruiser from her commissioning, 15 November 1932 until June 1934, when he reported aboard USS Goff. He remained in the latter until August of the same year, when he was assigned to the staff of Commander Destroyer Squadron FIVE, operating with the Asiatic Fleet.

For a year from June 1937, he attended the course in General Line at the Postgraduate School, Annapolis, Maryland, after which he had instruction in intelligence in the Office of the Chief of Naval Operations, Navy Department, Washington, DC. Completing the course there in May 1939 he reported as Gunnery Officer of USS McDougal. While he was aboard that destroyer she transported the late President Franklin D. Roosevelt to the Atlantic Charter Conference; was on North Atlantic Patrol; made the first mail trip to Iceland after the occupation; and participated in pre-war convoy duty. In December 1941 he transferred to USS Mississippi to serve as Air Defense Officer, First Lieutenant and Damage Control Office. He was entitled to the Ribbon for, and a facsimile of the Navy Unit Commendation awarded the Mississippi. The citation follows in part:

".....As Flagship of our battle line during the historic night battle of Surigao Strait, the USS Mississippi led our forces in annihilating the heavy Japanese surface units. For thirty-six continuous combat days, she conducted bombardment missions to cover the Leyte landings and, in the face of vicious Kamikaze attacks with almost no air support led out embattled Naval forces as they guarded our foothold in the Philippines. In making the daring initial penetration of Lingayen Gulf on 6 January 1945, she fought off suicide planes in their supreme attempt to cripple our heavy ships and, for the next forty days, effectively bombarded shore installations, supported our amphibious forces on the landing benches and provided a covering force until Luzon was finally secured. Undeterred by either the continuing Kamikaze attacks or by the sudden and rapid fire from enemy shore batteries, she again provided effective fire support to our troops on the Okinawa beaches. Climaxing her career by the brilliant three-day bombardment of the most strongly fortified position encountered in tho Pacific War, she completely destroyed Shuri Castle and enabled our Marines to capture this stronghold almost without opposition....."

Detached from Mississippi in March 1945 he was assigned to the Third Naval District, New York, New York, as Director of Discipline, with additional duty as Director of Welfare. He remained there until August 1946, when he became Intelligence Officer, Tenth Naval District, San Juan, Puerto Rico. Returning to service afloat, he commanded USS Whiteside from November 1947 to February 1949, when he reported as District Intelligence Officer, Sixth Naval District, Charleston, South Carolina. He is now under orders to the Naval War College, Newport, Rhode Island, for instruction.