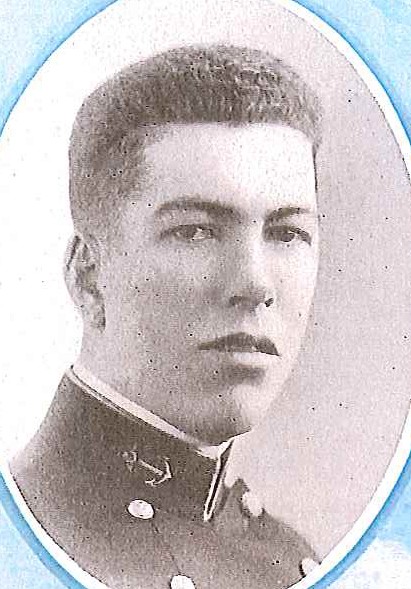 Graeme Bannerman was born in Berlin, Wisconsin, on April 29, 1895, son of William and Catherine C. Thackeray Bannerman. He attended Redgranite grade and high schools in Berlin, and Business High School in Washington, DC, prior to his appointment to the US Naval Academy, Annapolis, Maryland, which he entered on October 1, 1914. As a Midshipman he was a member of the Soccer Team and Masqueraders. Graduating with the Class of 1918 on June 28, 1917 (accelerated course due to war emergence), he was commissioned Ensign from the date, and subsequently attained the rank of Captain, to date from June 20, 1942. He was transferred to the Retired List in that rank on December 1, 1948, for physical disability incurred in the service.

After graduation from the Naval Academy in June 1917, he was assigned to USS Minnesota, and from April 1918, throughout the latter months of World War I, he was attached to USS Henderson, engaged in transporting troops from New York, N.Y., to Brest, France. A fire in a cargo hold required the Henderson to put back the Philadelphia on one trip, and he was commended with other officers by the Secretary of the Navy for their efforts to preserve ship and personnel, and “the successful transfer at sea at night, of a large number of men from the Henderson to other ships…”

Following the war he served for three years as a turret officer on board USS Pennsylvania, and from February 1922 until June 1930 served in submarines, except for a year and one-half of shore duty at the Naval Academy. He had been in command of USS S-51 until ten days before her sinking on September 25, 1925, and after shore duty commanded USS S-1 in 1927-1930. He next had a tour of duty at the Navy Yard, Charleston, South Carolina, and in March 1932, joined USS Arkansas as Engineering Officer. In July 1935 he was ordered detached for further duty at the Naval Academy, this time as an instructor in the Department of Marine Engineering.

In the fall of 1937 he was ordered to Headquarters, Sixteenth Naval District, Cavite, Philippine Islands, and was subsequently assigned to command of USS Pecos, and later (November 1938 to February 1940) USS Canopus, which participated in action during operations in China for the protection of American life and property during the Sino-Japanese War, 1938-1939. Upon his return to the United States he was ordered to the Naval Reserve Officers Training Corps Unit of Northwestern University, Evanston, Illinois, and in August of 1940 was transferred to duty as Executive Officer of the Naval Reserve Midshipman’s School, Chicago, Illinois, which he had organized and established.

After the outbreak of World War II in December 1941 he was ordered detached on January 10, 1942, and a few days later reported to the William Cramp and Sons Shipbuilding Company, Philadelphia, Pennsylvania, to assist in the conversion of USS Esso Trenton. He assumed command of that vessel, renamed USS Chicopee, on February 9, 1942, and served as her Commanding Officer while she operated with the Atlantic Fleet’s Service Force early in the war period. He was later assigned duty as Operations Officer on the Staff of the Commander Service Force, and remained in that assignment until January 1945.

Captain Bannerman was awarded the Bronze Star Medal, with citation as follows: “For meritorious service as Commanding Officer of USS Chicopee, and later as Operations Officer in the Staff of Commander Service Force, US Atlantic Fleet, from February 1942, until January 1945. Demonstrating outstanding seamanship, Captain Bannerman contributed materially to the successful performance of the Chicopee and, subsequently serving as Operations Officer, planned and directed the sailing of hundreds of ships laden with vital war supplies for Atlantic Fleet ships and bases and for Naval Forces in Europe and in Mediterranean Area, working tirelessly to insure the most efficient utilization of oilers, general cargo, refrigerated and munitions ships…”

Upon his return to the United States early in 1945, he was ordered to the Norfolk Naval Shipyard, Portsmouth, Virginia, and from January of the next year until his retirement on December 1, 1948, served as Administrative Officer there. Since that time he has made home in Burton, South Carolina.