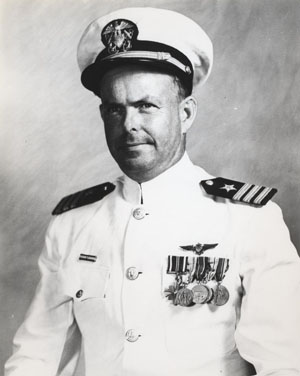 Raphael Semmes, Jr., was born in Montgomery, Alabama, on 18 January 1916, son of Raphael and Louise (Thornton) Semmes. He attended Huntsville (Alabama) High School and the Marion (Alabama) Institute, prior to entering the US Naval Academy, Annapolis, Maryland, on appointment from his native state in 1934. Graduated and commissioned Ensign on 2 June 1938, he subsequently advanced in rank, attaining that of Captain, to date from 1 July 1957.

Following graduation from the Naval Academy in 1938, he joined the USS Louisville and in May 1939 transferred to the USS Somers. Detached from that destroyer in August 1940, he next had flight training at the Naval Air Station, Pensacola, Florida. Designated Naval Aviator on 13 February 1941, he reported in April of that year for duty with the Aviation Unit of the USS St. Louis. On board that cruiser, he was present during the Japanese Attack on the Naval Base, at Pearl Harbor, Territory of Hawaii, on 7 December 1941 and subsequently participated in the raids on the Marshall and Gilbert Islands in February 1942 and in the cruiser bombardment of the Aleutian Islands in August of that year.

In November 1942 he reported as Senior Aviator on board the USS Alabama , operating with the British Fleet in the North Atlantic. In that assignment he took part in the convoy coverage of the Iceland-Murmansk route. Detached from the Alabama in August 1943, he next commanded Observation Squadron NINE, on board the USS South Dakota, and as such participated in the Marshall Islands invasion. He had operational training at the Naval Air Station, Melbourne, Florida, between January and March 1944, after which he was in command of Composite Squadron NINETY-EIGHT, based on the USS Lunga Point, and saw action at Okinawa and in the East China Sea. 'For heroism and extraordinary achievement...as Pilot of a Fighter Plane in Composite Squadron NINETY-EIGHT...and as Flight Leader of the strike groups from three carriers during attacks on enemy installations and shipping in the Chosen Archipelago, China, on 28 July and 6 August 1945...' he was awarded the Distinguished Flying Cross. The citation further states in part:

'Skillfully avoiding attacks on friendly Chinese shipping, (he) directed strikes on Ting Hai Airfield and Harbor Shipping in the Chosen Area, despite adverse weather conditions and intense antiaircraft fire. By his leadership and courage, he contributed materially to the success of both missions...'

He was also awarded the Air Medal and a Gold Star in lieu of the Second Air Medal for completing ten missions from 7 January to 7 August 1945 and is entitled to the Ribbon for, and a facsimile of the Presidential Unit Citation awarded the USS Lunga Point.

From November 1945 until August 1946 he was attached to the Boston Group, Atlantic Reserve Fleet for duty, in a supervisory capacity, for the mothballing of World War Two carriers. He next served as an Instructor and as Executive Officer of the Naval Reserve Officers Training Corps Unit at the University of Mississippi at New Oxford, and in October 1948 joined the Staff of Commander Battleships-Cruisers, Atlantic Fleet, for duty as Aviation Officer, later Operations Officer. During the period June to September 1949 he had operational training at the Naval Air Station, Pensacola, Florida.

In October 1949 he assumed command of Patrol Squadron TWENTY-ONE, first Navy jet and prop patrol squadron, and as attached participated in January 1951 in the first trans-Atlantic P4M1 flight. Between June 1951 and July 1953 he served as Assistant Head of the Aircraft Logistics Branch, Office of the chief of Naval Operations and as Deputy Director of the Aircraft Logistics Division in the Bureau of Aeronautics, Navy Department, Washington, DC. He reported in August 1953 as Executive Officer of the Air Development Squadron ONE and from November 1955 until January 1957 had duty afloat as Executive Officer of the USS Intrepid.

He headed the Fleet Air Defense Branch, Surface Type Warfare Division in the Office of the Chief of Naval Operations, Navy Department until December 1958, after which he served as Chief of Staff and Aide to the Commander Middle East Force, participating in operations in the Persian Gulf, Red Sea and Indian Ocean. In February 1960 he assumed command of Lake Mead Base, Las Vegas, Nevada, and August 1962 reported as Director of the Officer Performance Division, Bureau of Naval Personnel, Navy Department. In June 1964 he became Commander Early Warning Wing, Atlantic, and Commander, Fleet Air, Argentia, and in June 1965 was ordered detached to command the Naval Air Facility, El Centro, California.

Captain Semmes retired from the US Navy in July 1967. He passed away in El Centro, California 29 January 1981.