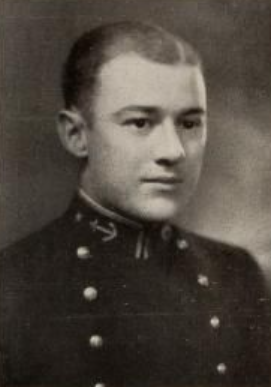 The following biography is an electronic version of an item held by the Navy Department Library in our Rare Book Room.  Aside from minor technical corrections, this electronic transcription is a faithful reproduction of the original paper item.  Those wishing to see a pdf version of this item can download it here [179KB].

Andrew McBurney Jackson, Jr., was born in Holly Springs, Mississippi, on March 12, 1907, son of the late A. McBurney Jackson and Mrs. Alice Quiggins Jackson. He was reared in Baton Rouge, Louisiana,  where he graduated from high school in 1923 and attended Louisiana State University for three years before his appointment to the US Naval Academy in June 1926. As a Midshipman he was Regimental Commander (5 striper) in 1930, and was awarded the Gardner L. Caskey Prize, Class of 1924 Prize, Class of 1897 Sword and the Class of 1879 Sword. Graduated No. One in a class of four hundred and two members, and commissioned Ensign on June 5, 1930, he subsequently advanced in rank to Rear Admiral, to date from December 1, 1957, and to Vice Admiral, to date from July 20, 1964.

Upon graduation from the Naval Academy in June 1930, he was assigned to the USS Mississippi, and served in the gunnery department of  that battleship until March 1931 when he was detached with orders to the Naval Air Station, Pensacola, Florida, for flight training. Designated Naval Aviator on March 17, 1932, he reported for duty as a pilot of Scouting Squadron SIX-B, attached to the USS Milwaukee. From July 1934 until June 1936 he had similar duty with Scouting Squadron THREE, in the USS Lexington and Patrol Squadron ONE at Pearl Harbor, Territory of Hawaii.

Returning to Annapolis, he was a student at the Postgraduate School for two years and, continuing the course at the California Institute of Technology, Pasadena, received the degree of Master of Science in Aeronautical Engineering in June 1939. For two years thereafter, he served with Fighting Squadron SIX in the USS Enterprise and in July 1941 reported to the Navy Department, Washington, DC, for duty in the Fighter Design Branch of the Bureau of Aeronautics. He remained there as Project Officer in design of Grumman F6F (HELLCAT), until June 1943.

He next joined the USS Intrepid for duty as Commander Carrier Air Group EIGHT, which formed aboard that carrier but was later based in the USS Bunker Hill. As such, he participated in combat in the Pacific in the spring of 1944. He was awarded the Distinguished Flying Cross "For heroism and extraordinary achievement in aerial flight as Pilot of a Fighter Plane in Fighter Squadron EIGHT attached to the USS BUNKER HILL, during operations against enemy Japanese shipping and installations at Palau, Woleai, Hollandia and Truk, in March and April 1944…” The citation states that as Strike Leader, he "fearlessly penetrated accurate and intensive antiaircraft fire which seriously damaged his plane to obtain a direct bomb hit on an important enemy radio station…”

He is also entitled to a facsimile of, and Ribbon for, the Presidential Unit Citation awarded the USS Bunker Hill for "extraordinary heroism in action against enemy Japanese forces in the air, ashore and afloat in the South, Central, Southwest and Western Pacific, from November 11, 1943 to May 11, 1945..."

From May to December 1944 he served as Navigator of the USS Bunker Hill, participating in operations with Task Forces THIRTY-EIGHT and FIFTY-EIGHT during that period. In 1945 he served as Operations Officer on the Staff of Commander Carrier Division SIX, in USS Yorktown, flagship. He was awarded the Legion of Merit with Combat "V," for "exceptionally meritorious conduct…as Operations Officer to Commander Carrier Division SIX…during operations against enemy Japanese forces in the Pacific War Area from December 1944 to August 1945…” The citation continues: "Participating in strikes against Saigon, Hong Kong, Formosa, Kyushu, Shikoko, Honshu and Hokkaido and in strikes in support of landings on Mindoro, Luzon, Iwo Jima, and Okinawa, Captain (then Commander) Jackson relieved his commanding officer of many operational and administrative matters and, by his technical knowledge  of the available aircraft, coordinated the air operations of the group  and contributed materially to the success of the various types of offensive operations carried out by his command…"

He is also entitled to the Ribbon for, and facsimile of the Presidential Unit Citation awarded to the USS Yorktown "For extraordinary heroism in action against enemy Japanese forces in the Pacific War Area from August 31, 1943 to August 15, 1945..."

He returned to the Bureau of Aeronautics in December 1945, as Director of the Plans Coordination Division. He assumed command of the USS Timbalier (AV-54) in February 1948. During the time he was commanding the TIMBALIER, she was awarded the Battle Efficiency Pennant for being the outstanding ship of her class in the Atlantic Fleet.

Detached from the Timbalier in December 1948, he served for the three years to follow with the Atomic Energy Commission, first as Chief of the Weapons Research and Development Branch, and later as Deputy Director of the Military Applications Division. In January 1952 he reported as Chief of Staff to Commander Carrier Division FIVE, and as such took part in Task Force SEVENTY-SEVEN operations in the Korean area. As Chief of Staff, he was awarded two Gold Stars in lieu of the Second and Third Legion of Merit. He was detached in January 1953, and in February became Assistant Chief of Staff for Operations on the Staff of Commander Air Force, Pacific. From May 1954 until July 1955 he served as Naval Aide to the Secretary of the Navy, and for a year thereafter commanded the attack aircraft carrier, USS Ticondorega (CVA-14), in the SIXTH Fleet. In August 1956 he was assigned to the Office of the Chief of Naval Operations as Assistant to the Director of the Strategic Plans Division for JCS matters.

From October 25, 1957, until June 1959, he was Senior Naval Member of the Weapons Systems Evaluation Group, Office of the Assistant Secretary of Defense (Research and Engineering), Washington, DC. He next commanded Carrier Division THREE. His flagships included the  USS Bon Homme Richard and the USS Ticondorega, which operated in the Western Pacific as part of the SEVENTH Fleet. In September 1960 he be came Commander Middle East Force, with homeport in Bahrein Island in the Persian Gulf. The vast area encompassed by COMIDEASTFOR required extensive traveling. Trips by aircraft and flagship included official visits to approximately twenty different countries and independent Sheikdoms around the Indian Ocean.

In April 1967, he became Naval Representative and Vice Chairman of the United States Delegation to the United Nations Military Staff Committee, with additional duty as Commander Eastern Sea Frontier, headquartered in New York, New York. His position at the United Nations made him principal military advisor to Ambassador Goldberg.

In his second assignment, he played an important part in planning for the sea defense of the Eastern two-thirds of the United States. "For exceptionally meritorious service…as Vice Chairman and later as Chairman of the United States Delegation, United Nations Military Staff Committee, with additional duty as Commander Eastern Sea Frontier from April 1967 through March 1969…" he was awarded a Gold Star in lieu of the Second Distinguished Service Medal. The citation continues in part:

"In his United Nations position, Vice Admiral Jackson was the Chief Military adviser to the United States Ambassador to the United Nations during two momentous occasions; the Middle Eastern conflict of June 1967 and the USS PUEBID incident of   January 1968…He applied his exceptional talents, interest, and energy in advising and supporting the U.S. Representative on the Security Council and, as appropriate, the Chairman of the Joint Chiefs of Staff. By fostering a spirit of mutual trust and cooperation between the Office of the U.S. Delegation  to the Military Staff Committee and the Offices of other nations with which it dealt, Vice Admiral Jackson sagaciously and adroitly won new esteem and high regard for the U. S. Military Mission among his associates  in the Diplomatic Corps. As Commander, Eastern Sea Frontier, he demonstrated an excellent managerial capability in providing his command with vastly improved control or shipping, area coordination, and command relations…"

On April 1, 1969 he was transferred to the Retired List of the US Navy.