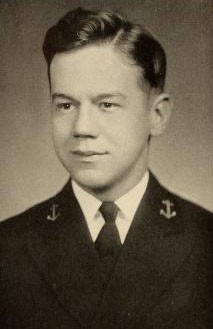 James Seerley Clark was born in Cedar Rapids, Iowa, on October 2, 1912. He was appointed Midshipman from the Fifth District of Iowa, and entered the US Naval Academy, Annapolis, Maryland, on June 16, 1931. Graduated with the Class of 1935, he received the degree of Bachelor of Science and was commissioned Ensign in the US Navy, to date from June 6, 1935. Through subsequent advancement, he attained the rank of Lieutenant Commander, to date from May 1, 1943.

After graduation from the Naval Academy in 1935, he reported to the USS Indianapolis, and served as a junior officer in that cruiser until December 4, 1937. He then had communication duty on the Staff of Commander, Scouting Force, and a year later was detached for instruction at the Submarine School, US Submarine Base, New London, Connecticut. Completing the course in June 1939, he was ordered to the Navy Yard, Mare Island, California, to assist in fitting out the USS Swordfish, and served on board the submarine from her commissioning on July 22, 1939, until April 30, 1943.

The Swordfish was at Manila, Philippine Islands, when the Japanese attacked the Fleet at Pearl Harbor on December 7, 1941, and had made seven war patrols in the Pacific by April 1943. Lieutenant Commander Clark was awarded the Silver Star Medal, “For conspicuous gallantry and intrepidity as Assistant Approach Officer and also as Torpedo and Gunnery Officer of the USS Swordfish in action against enemy Japanese forces in the Pacific Area…” The citation further states:

“During four hazardous war patrols of his ship, Lieutenant Commander Clark rendered invaluable services by his skillful maintenance of torpedoes insuring consistently straight, accurate runs, and by his splendid initiative in effectively solving the torpedo problem despite severe enemy depth charging and bombing. When the Swordfish was assigned two special missions to Corregidor Fortress, (he) greatly assisted in the successful execution of these important tasks. His outstanding ability and inspiring leadership contributed materially to the destruction of eleven hostile vessels and the damaging of another, and were in keeping with the highest traditions of the United States Naval Service.”

Returning to the United States, he reported to the Navy Yard, Portsmouth, New Hampshire, to assist in fitting out the USS Archer Fish. He remained there from May 11, until her commissioning in September 1943, then served on board the Archer Fish until February 1944. On February 19, that year he joined Submarine Division 43 for duty as a Prospective Commanding Officer, and on May 9 assumed command of the USS Golet. He was officially determined to be Missing in Action as of July 12, 1944, when the USS Golet failed to return from a war patrol in the Northwestern Pacific Ocean. In compliance with Section 5 of Public Law 490, as amended, death is presumed to have occurred on January 18, 1946.