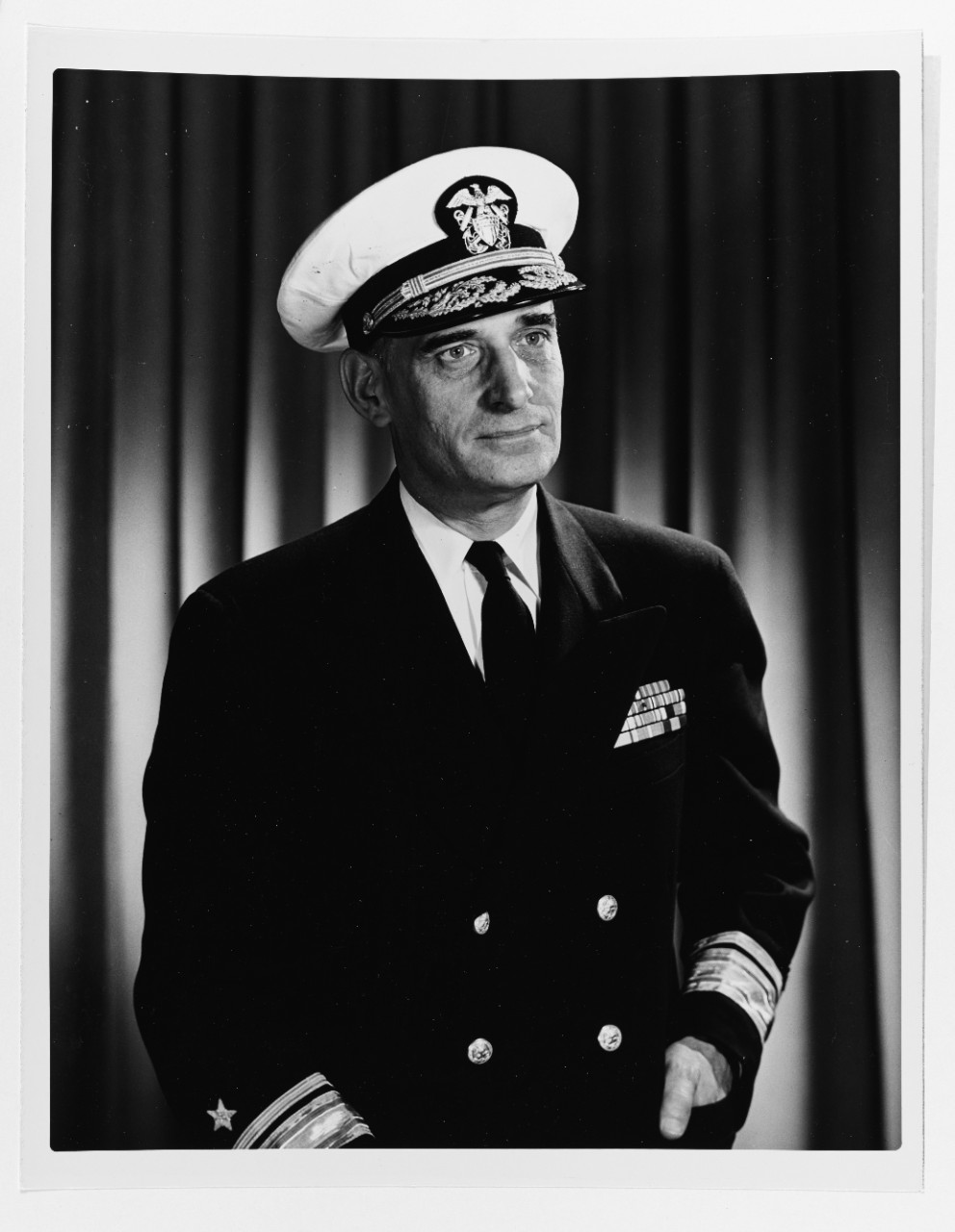 William Bronley Ammon, son of Mrs. Nettie M. Reichley Ammon and the late William L. Ammon, was born on 25 April 1902, in York, Pennsylvanisa. He attended York High School and the Pennsylvania State College, prior to his appointment to the  US Naval Academy at Annapolis, Maryland, from the Twentieth District of his native state in 1919.

As a Midshipman he received the "Class of 1897 Sword" which is presented annually to the Midshipman of the graduating class who has contributed most, by his officer-like qualities and positive character to the development of the naval spirit and loyalty within the regiment. Graduated and commissioned Ensigne on 8 June 1923, he subsequently attained the rank of Rear Admiral to date from 1 January 1951.

Upon graduation from the Naval Academy in 1923, he remained there until August of that year, when he reported for duty in the Gunnery Department of the USS Florida, a unit of Battleship Division TWO, Scouting F1eet. Detached from the Florida, in October 1924, he then had consecutive service as Communication and Torpedo Officer in the destroyers Mervine and Selfridge, both operating with Division THIRTY FIVE, Destroyer Squadron TWELVE, Battle Fleet.

In July 1928 he returned to the United States and reported for instruction in communication engineering at the Postgraduate School, Annapolis Maryiand. From July 1929 to September 1930 he continued instruction at various places including Harvard University, Cambridge, Massachuetts, where he received the degree of Master of Science in 1930. He joined USS Oklahoma as Communication Officer in October 1930, and served in that vessel, operating with Battleship Divisions THREE and ONE, Battle Fleet, successively, until October 1932. He was then assigned as Communication Officer on the staff of Commander Battleship Division ONE, USS Texas flagship, and from May 1933 to June 1934 had similar duty on the staff of Commander Scouting Force, USS Indianapolis, flagship.

Between June 1934 and May 1936 he was assigned to the Fleet Desk, Communication Division, Naval Operations, Navy Department Washington, DC, after which he joined the staff of Commander Cruiser Division TWO as Aide and Flag Secretary. In June 1937 he transferred to like duty on the staff of Commander Cruisers, Battle Force, and remained in that assignment until July 1938 when he reported as Executive Officer aboard the USS Selfridge

Detached from that destroyer in June 1939, he served briefly in the Office of the Chief of Naval 0perations, before he reported in August 1939 as Assistant Naval Attache at the American Embassy, London, England. He was there during the London Blitz, and also served as an Observer in HMS Vanoc. Again returning to the Office of Chief of Naval Operations in May 1941, he remained there for two months, after which he assumed command of USS Madison. Under his command, the Madison was on escort duty in the North Atlantic, and Caribbean, and was subsequently assigned to Task Force NINETY NINE, operating with the British Home Fleet out of Scapa Flow. The Madison escorted the Wasp on her first trip into the Mediterranean, taking aircraft to Malta and later, on 3 September 1942, rescued personnel from and guarded USS Wakefield when she burned at sea. For commendable service during the latter operation, he received a Letter of Commendation, With authorization to wear the Commendation Ribbon from the Commander in Chief, US Atlantic Fleet.

He received a second Letter of Commendation "for meritorious service..." while in command of the Madison during convoy operations in the Atlantic.

In November 1942 he reported as Naval Cemmunications Plans Officer and Logistics Division Electronic Plans Officer in the Office of the Chief of Naval Operations, Navy Department, and continued to serve in that capacity until April 1944, when he was assigned to the staff of the Commander in Chief, US Fleet, and the Chief of Naval Operations. He remained in that duty until June 1945, and in August 1945 he assumed command of the USS Panamint which served as flagship of Commander North Pacific Force during the occupation ceremonies at Ominato, Kyushu, Japan, and was flagship of Commander Mine Force, Pacific, at Sasebo, Honshu, Japan. Continuing in command of the Panamint after the surrender ceremonies, he was present at Bikini Atoll, during the atomic bomb tests there in July 1946, where she had transported Congressmen, United Nations Observers, and non-participating scientists to view the operations.

Detached from command of the Panamint in July 1946, he had instruction at the National War College, Washington, DC, before he reported in July 1947 as Assistant Chief of Staff for Communications on the staff of the Commander in Chief, US Pacific Fleet. Following three months' duty (July to October 1948) in command of USS Toledo, he was assigned to the Division of Naval Communications, Navy Department, where he served as Assistant Director. He commanded Destroyer Flotilla Three, US Pacific Fleet for a year, March 1951-March 1952, after which he was Director Naval Communications, Office of the Chief of Naval Operations. In February 1955 he was designated Commander Battleship Division TWO and on 13 February 1956 assumed duty as Commander Naval Forces, Marianas.

On 10 July 1958 he assumed duty as Deputy Commandant of the National War College, Washington, DC.

He died at the US Naval Hospital, Bethesda, Maryland, on 16 August 1959. Services were held at Fort Myer Chapel, Arlington Virginia on 19 August, and he was buried in Arlington National Cemetery.