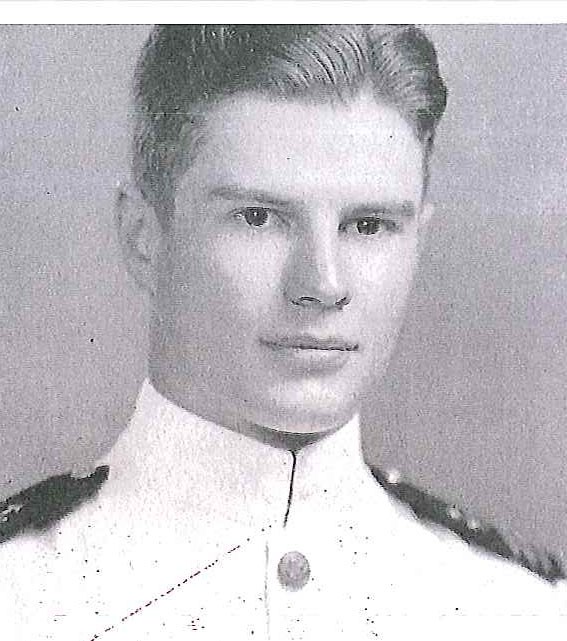 Vincent Paul de Poix was born in Los Angeles, California, on August 13, 1916, son of Elzear Paul and Grace L. (Howard) de Poix, both now deceased. He attended Horace Greenley High School, Chappaqua, New York; the Severn School, Severna Park, Maryland and Lafayette College, Easton, Pennsylvania, prior to entering the US Naval Academy, Annapolis, Maryland, on appointment from the State of New York in 1935. Graduated with distinction, twenty-sixth in a class of five hundred and eighty one members, and commissioned Ensign on June 1, 1939, he subsequently advanced in rank, attaining that of Vice Admiral, to date from February 14, 1969.

Following graduation from the Naval Academy in 1939, he joined USS Minneapolis and a year later transferred to USS Sicard. Detached from that vessel in July 1941, he was ordered to the Naval Air Station, Pensacola, Florida, for flight training. Designated Naval Aviator, he had further training in January and February 1942 at the Naval Air Station, Miami, Florida and until May 1942 was attached to Advanced Carrier Training Group, Naval Air Station, San Diego, California.

Ordered to the South Pacific, he served from June 1942 until August 1943 with Fighting Squadron SIX on board USS Enterprise and USS Saratoga and later shore based on Guadalcanal. In that assignment he participated in the initial assault on Guadalcanal on August 7, 1942 and the subsequent operations in the Solomon Islands. For his outstanding service in the Guadalcanal area while attached to Fighting Squadron SIX he was awarded the Air Medal and a Gold Star in lieu of a second similar award. He is also entitled to the Ribbon for an a facsimile of the Presidential Unit Citation awarded the USS Enterprise for heroic service in the South Pacific during his period of service there.

In September 1943 he joined Experimental Ordnance Development Unit #1, at the Naval Air Station, San Diego, California and in March 1944 reported for instruction in ordnance engineering (aviation) at the Postgraduate School, Annapolis, Maryland. From October 1945 until August 1946 he continued the course at the Massachusetts Institute of Technology at Cambridge, from which he received the degree of Master of Science in Aeronautical Engineering. Following an assignment which extended to January 1948 with the Aviation Fire Control Unit at the Naval Ordnance Test Station, Inyokern, California, he assumed command of Fighter Squadron EIGHTEEN-A (later redesignated Fighter Squadron ONE HUNDRED SEVENTY-TWO), based consecutively at the Naval Air Stations, Quonset Point, Rhode Island, Cecil Field and Jacksonville, Florida.

For two years, June 1950-June 1952, he was Assistant Head of the Aviation Ordnance Branch, Research and Development Division in the Bureau of Ordnance, Navy Department, Washington, DC, after which he served as Aviation Readiness and Aviation Ordnance Officer on the Staff of the Commander in Chief, US Pacific Fleet. He served as Assistant Head, later Head, of the Air Launched Branch, Guided Missiles Division in the Office of the Chief of Naval Operations, Navy Department, from July 1954 until June 1957, when he assumed command of the Air Development Squadron FOUR, based at the Naval Air Station, Point Mugu, California. That Squadron under his command, was engaged in operational evaluation of air-launched guided missiles for the Navy. In March 1959 he became Commanding Officer of the seaplane tender USS Albemarle and in November of the same year reported for instruction, attached to the Office of the Assistant Director for Naval Reactors, Division of Reactor Development, Atomic Energy Commission, Washington, DC.

In September 1960 he was ordered to duty as Prospective Commanding Officer of USS Enterprise (CVA(N)65). Launched on September 24, 1960, she is the largest ship in the world and the first nuclear-powered aircraft carrier. When that vessel was commissioned on November 25, 1961, he took command and in July 1963 was detached for instruction at the National War College, Washington, DC. In June 1964 he was assigned to the Office of the Chief of Naval Operations, Navy Department and in July that year became Assistant Director for Administration and Management, Defense Research and Engineering, Office of the Secretary of Defense, Washington, DC. On March 7, 1966, he assumed duty as Assistant Director, Operational Test and Evaluation, Defense Research and Engineering. In August 1966 he reported as Commander Carrier Division SEVEN and for “exceptionally meritorious conduct…(in that capacity) in the Republic of Vietnam from August 9 to October 15, 1966 and from April 15 to August 10, 1967…” he was awarded the Legion of Merit.

In September 1967 he became Assistant Deputy Chief Naval Operations (Development), Navy Department. He was awarded the Distinguished Service Medal and cited, in part, as follows: “…Drawing on his broad operational experience and extensive background in the planning and management of research, development, test and engineering programs, (he) played a major role in the vital task of shaping and directing the United States Navy’s research and development efforts…”

On February 14, 1969 he assumed duty as Deputy Director of Defense Research and Engineering (Administration, Evaluation and Management), Office of Secretary of Defense, Washington, DC. He was awarded a Gold Star in lieu of the Second Distinguished Service Medal. The citation follows in part: “…His outstanding leadership, vast management knowledge and deep understanding of current defense problems enabled him to render invaluable service to the Office of the Secretary of Defense by greatly enhancing the Secretary’s efforts to improve weapons systems acquisition policies which resulted in better and less expensive programs…” In August 1971 he assumed command of the SECOND Fleet and in July 1972 reported as Deputy Director of the Defense Intelligence Agency, Washington, DC. The next month he became Director of that agency.