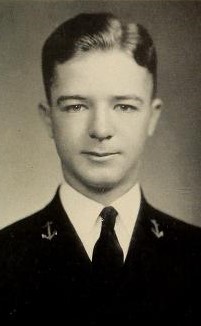 Clifford Smith Foster, Jr., was born in Norfolk, Virginia, on May 13, 1914, son of Clifford S. and Helen Stuart (Webb) Foster. He was graduated from Maury High School in Norfolk, in January 1930, and then attended the US Naval Academy Preparatory School at Annapolis, Maryland, before his appointment to the Naval Academy from the Second Congressional District of Virginia in 1931. As a Midshipman he was a member of the “Log” staff for two years. Graduated and commissioned Ensign in the US Navy on June 6, 1935, he subsequently advanced to the rank of Captain to date from March 1, 1954.

After graduation from the Naval Academy he was assigned to the USS Colorado (BB-45), a battleship of the Pacific Fleet in which he served as a junior officer from June 1935 until October 1937. From November of that year until July 1940 he had engineering and desk duties on board the USS Helm (DD-388), operating with the Atlantic Squadron and later with the Pacific Fleet. He then joined the USS Northampton (CA-26), and had communications and gunnery duties while that cruiser participated in various Pacific operations after the outbreak of World War II, until sunk in the Battle of Tassafaronga at Guadalcanal on the night of November 30, 1942.

In February 1943 he joined the USS Boston (CA-69) of the Pacific Fleet, and as Air Defense an Assistant Gunnery Officer until May 1944, and as Gunnery Officer for ten months thereafter, he participated in operations in the Pacific as a unit of the Third and Fifth Fleets. He then returned to the United States, and was assigned to the Bureau of Ordnance, Navy Department, Washington, DC. Remaining on duty there during the post- war period until June 1947, he served in the Ammunition Section of the Production Division (procurement and production of ammunition components).

He attended the Naval War College, Newport, Rhode Island, as a student in the junior class in Strategy and Tactics, from July 1947 until May 1948. In June 1948 he assumed command of the USS Vogelgesang (DD-862), a destroyer of the Atlantic Flee. In November 1949 he returned to the Navy Department, assigned as Head of the Western Hemisphere Branch, International Affairs Division of the Office of the Chief of Naval Operations. He remained there until May 1952, and from June of that year until October 1953 served as Politico-Military Affairs Officer on the Staff of th Supreme Allied Commander, Atlantic (Saclant)

For a year he served as Commander Destroyer Division 22, which included the USS English (DD-696), USS Hank (DD-702), USS W.L.Lind (DD-703), and USS Borie (DD-704), operating in the Atlantic. In September 1954 he was transferred to duty as Chief Plans and Program Section, navy Branch, Military Assistance Division of the Joint Staff of Commander in Chief, US European Command, at Paris, France. He remained there until the summer of 1956, then reported to the Industrial College of the Armed Forces, Washington, DC for instruction. Upon graduation in June 1957, he became Commanding Officer of the USS Rigel (AF-58), a unit of the Service Force, US Atlantic Fleet, operating in mobile logistic support of the Sixth Fleet in the Mediterranean.

In June 1958, Captain Foster reported for duty in the Office of the Secretary of Defense, Washington, DC, where he is now assigned as Assistant Chief, United Nations Affairs, in the Office of the Assistant Secretary of Defense (International Security Affairs). Under orders of April 25, 1962, he now serves as Deputy Chief of Staff for Naval Reserves, to the Commandant, Fifth Naval District, at Norfolk, Virginia.