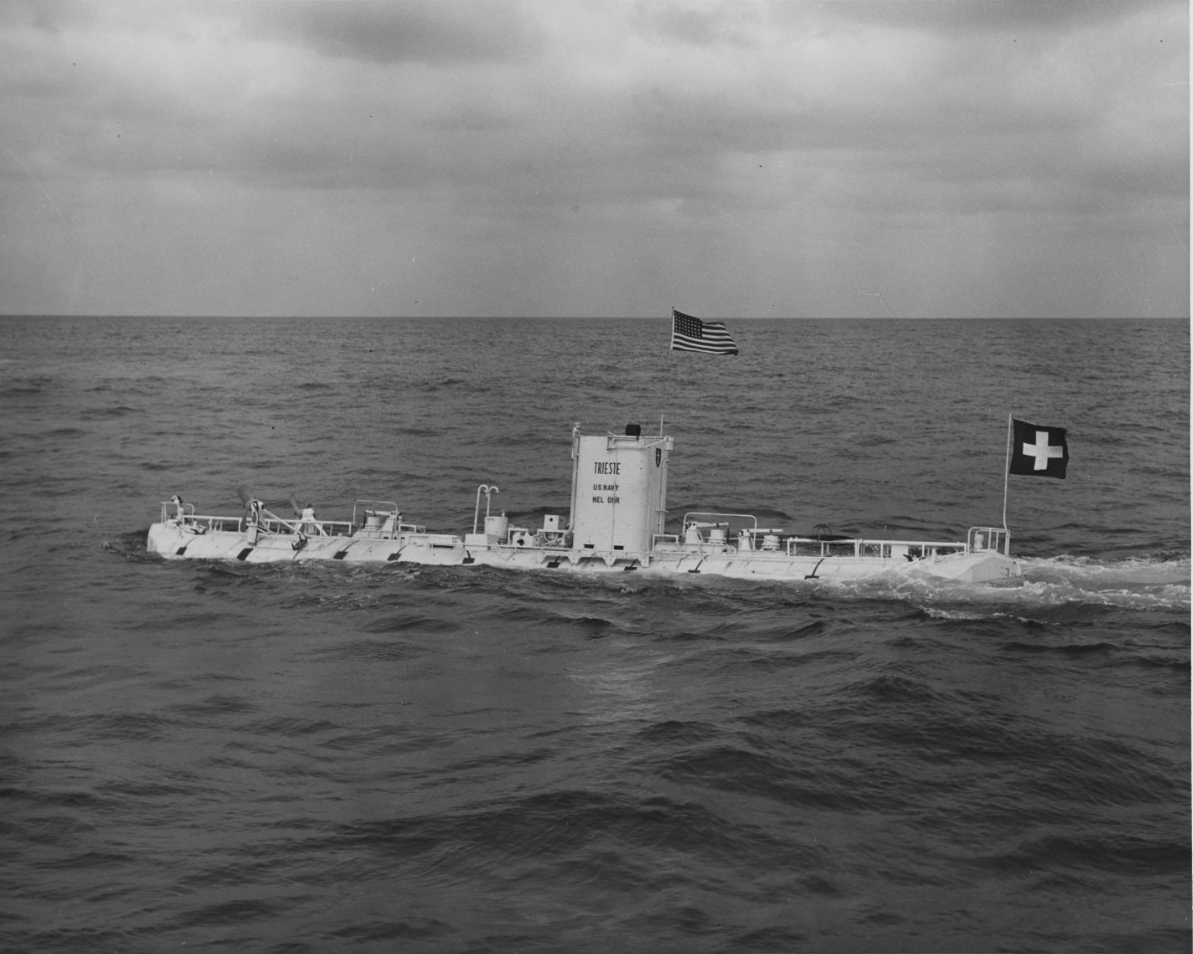 Trieste—a research bathyscaphe—was the development of a concept first studied in 1937 by Swiss physicist and balloonist Auguste Piccard. World War II delayed his work on the deep-sea research submarine until 1945 when he worked with the French government on the development of the craft. In 1952, Piccard was invited to Trieste, Italy, to commence construction. Scientific and navigational instruments for the vessel came from Switzerland, Germany, and Italy. In August 1953, the bathyscaphe was first placed in the water and later in that month, Piccard and his son, Jacques, dove to a depth of five fathoms.

After several years of operations in the Mediterranean, the U.S. Navy acquired the vessel in August 1958 and transported the bathyscaphe to San Diego, California, where she was homeported. Beginning in December of 1958, Trieste was fitted with a stronger sphere, fabricated by the Krupp Iron Works of Germany.

Following the ship’s fabrication, Trieste was transported to Guam to participate in Project “Nekton.” On 23 January 1960, Trieste made history when Lieutenant Don Walsh, USN, and Jacques Piccard descended seven miles to the Challenger Deep—located at the southern end of the Mariana Trench—the deepest known point of the Earth’s oceans.

Following the historic dive, the bathyscaphe was overhauled and then conducted a number of dives out of the San Diego area supporting Navy research objectives. In April 1963, nuclear submarine Thresher (SSN-593) was lost with all hands off the Massachusetts coast. Trieste was transported across the country to Boston where she began to search for the lost submarine. After a number of dives, Trieste discovered debris from Thresher 220 miles off Cape Cod that included the submarine’s sail, which clearly showed the number “593.” For her part in the Thresher search, the bathyscaphe and her commander received the Navy Unit Commendation.

After the search mission was complete, Trieste was taken out of service and returned to San Diego. In early 1980, the bathyscaphe was transported to the Washington Navy Yard where the vessel was placed on exhibit at the National Museum of the U.S. Navy. 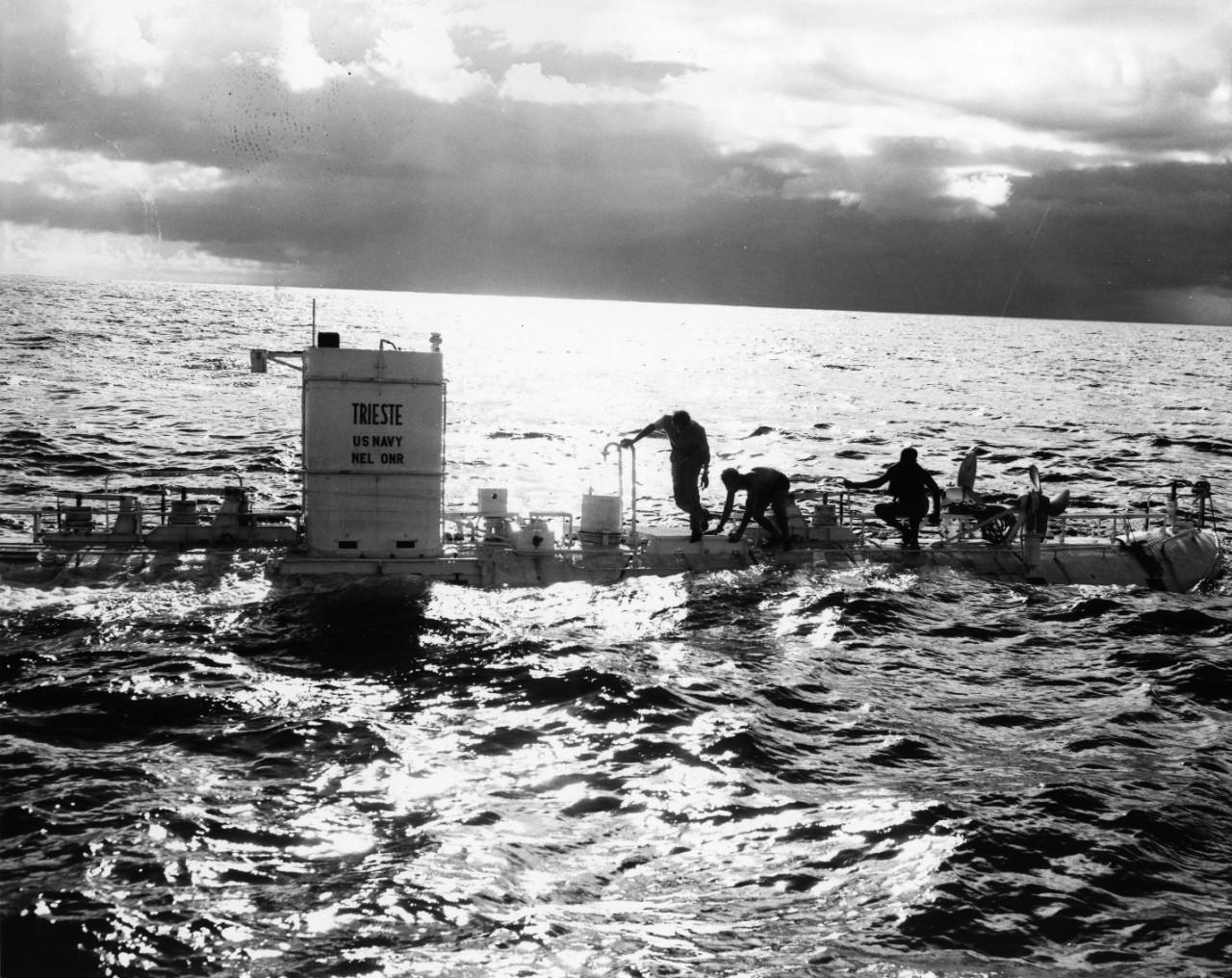 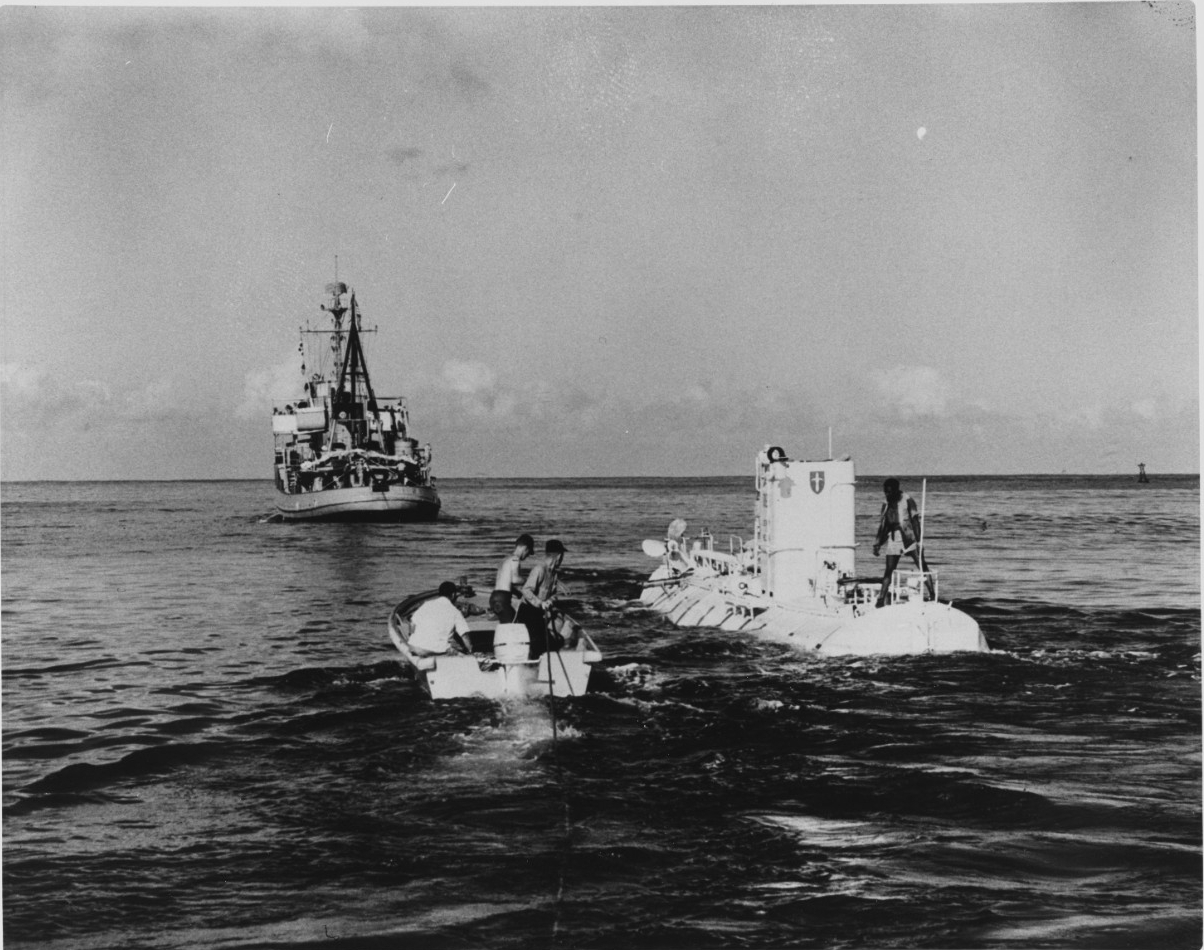 Jacques Piccard, co-designer of the bathyscaphe, and his assistants make final checks aboard her, prior to Trieste's first deep dive in the Marianas Trench. On 15 November 1959, off Guam, she dove to 18,600 feet, breaking the previous record of 13,000 feet. USS Wandank (ATA-204) is in the distance. Photo was released from publication on 28 November 1959. U.S. Naval History and Heritage Command photograph. Catalog#: NH 96802. 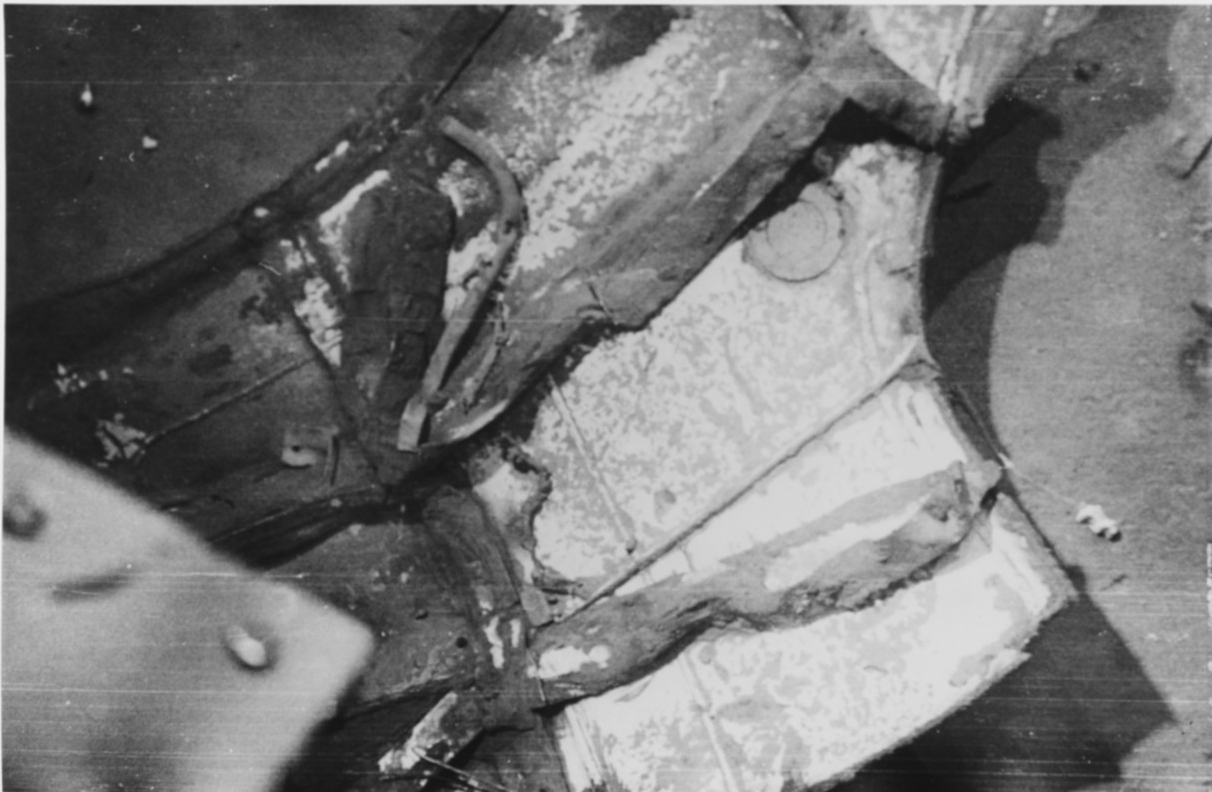 Section of a sonar dome from the bow of a Thresher class submarine photographed 24 August 1963 during the second series of dives by the Bathyscaphe Trieste. The bathyscaphe completed 10 dives some 220 miles east of Cape Cod where the nuclear powered submarine Thresher sank 10 April. Official U.S. Navy photograph from the collections of the Naval History and Heritage Command. Catalog#: NH 97562. 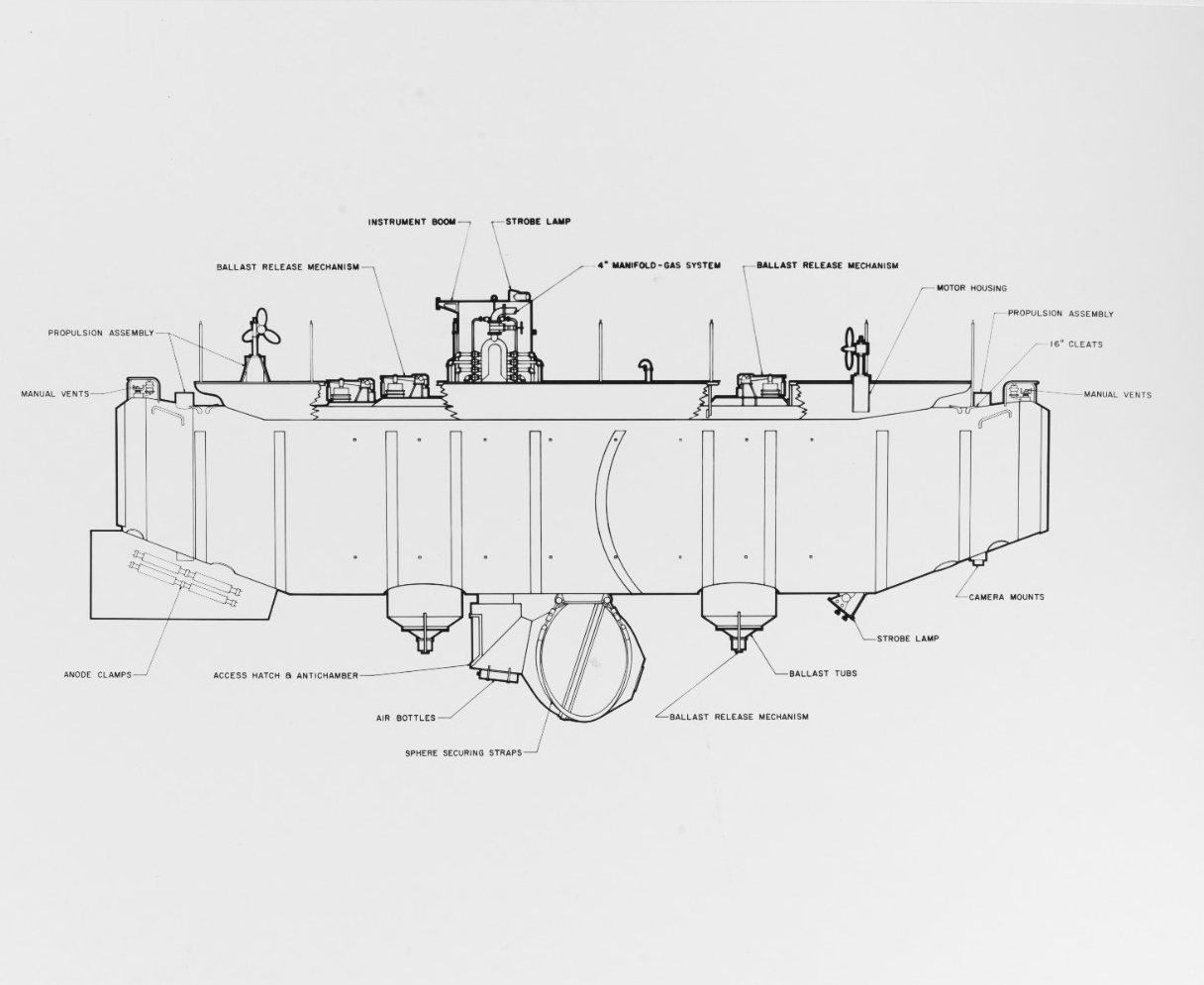 Outboard profile drawing of Trieste's configuration in about 1963, prepared for the Navy Museum, Washington, DC., during the early 1980s. Trieste was placed on exhibit in the Navy Museum in 1980. U.S. Naval History and Heritage Command photograph. Catalog#: NH 95258. 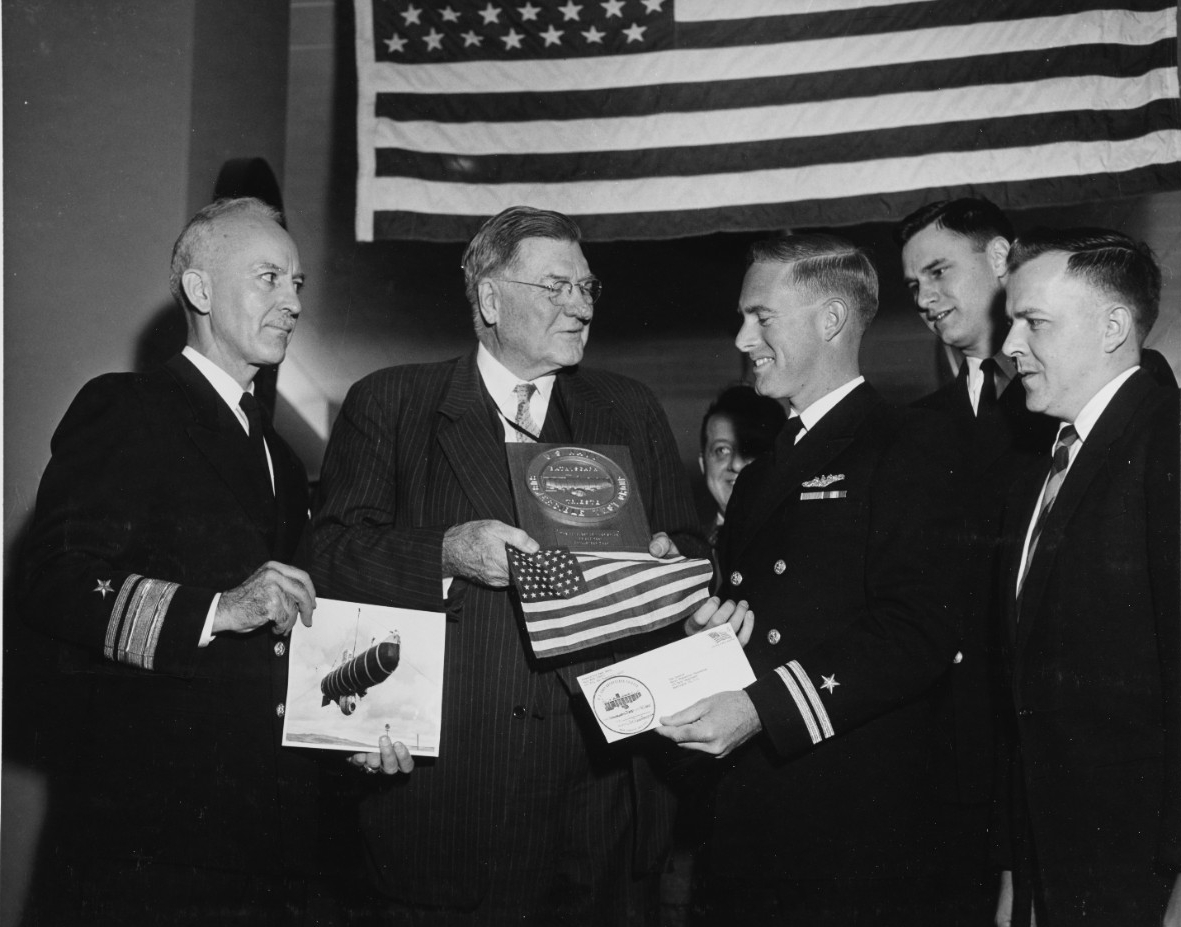 Presentation made to the Naval Historical Foundation by Lieutenant Don Walsh, officer in charge, Bathyscaphe Trieste, of a commemorative plaque, an American flag, a philatelic cover, and photograph of Trieste. Trieste dove to a record depth of 35,800 feet off Guam on 23 January 1960. Naval History and Heritage Command photograph. Catalog#: NH 120133. 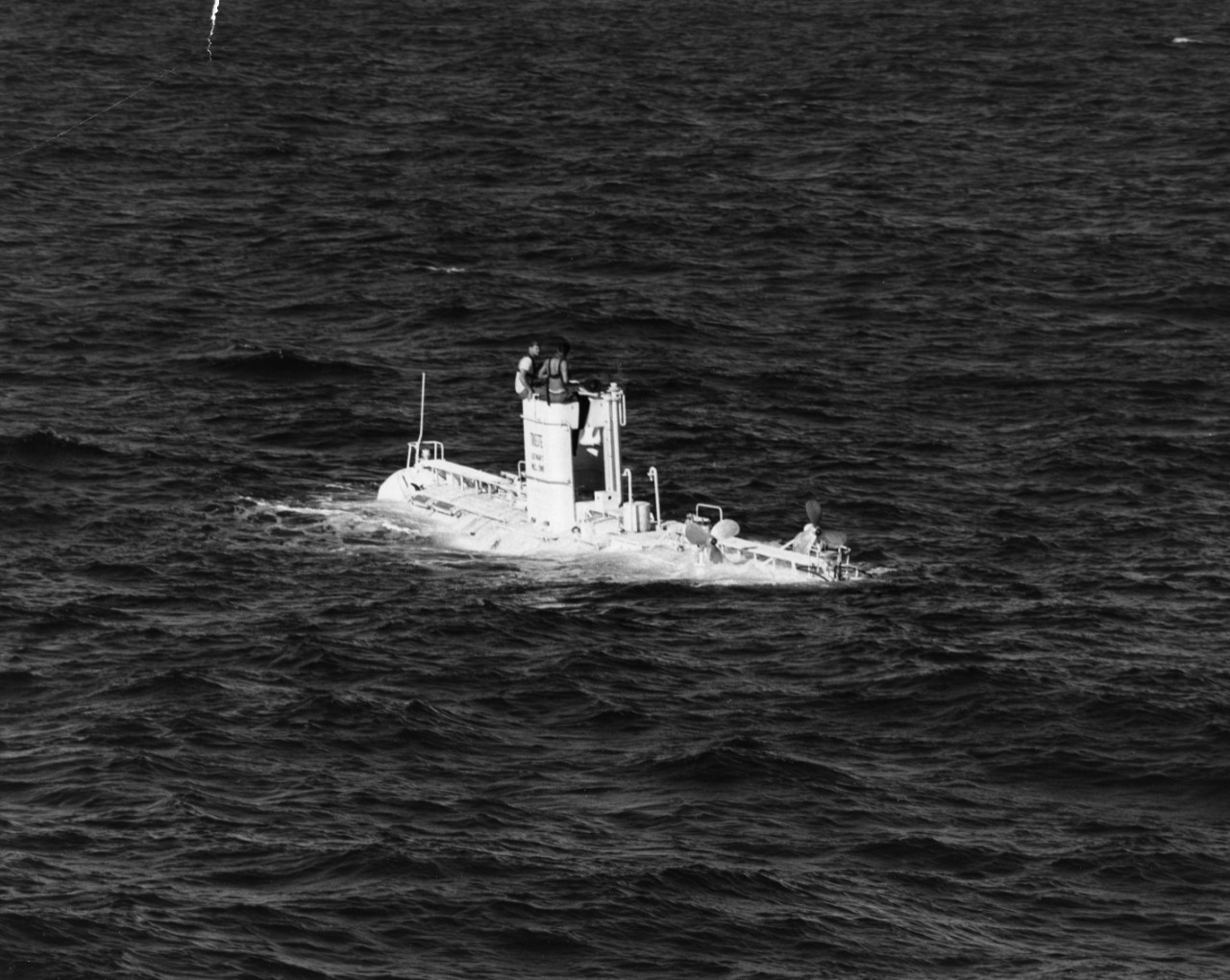 Bathyscaphe Trieste after her dive at 18,600 feet. On the conning tower are Dr. Andrea B. Rechnitzer (left) and Jacques Piccard, the two men who were at the controls. National Archives photograph. Catalog#: USN 1044871. 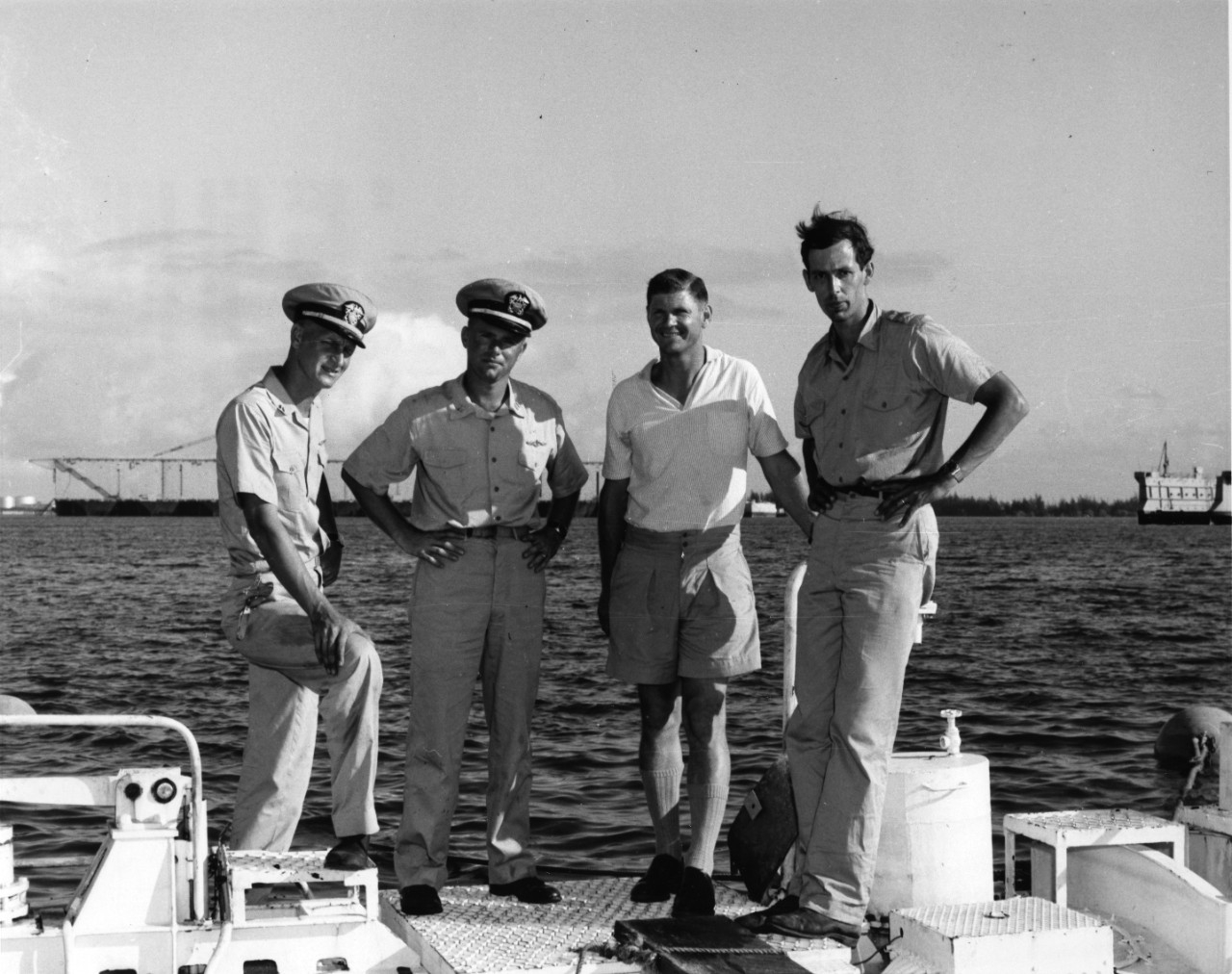 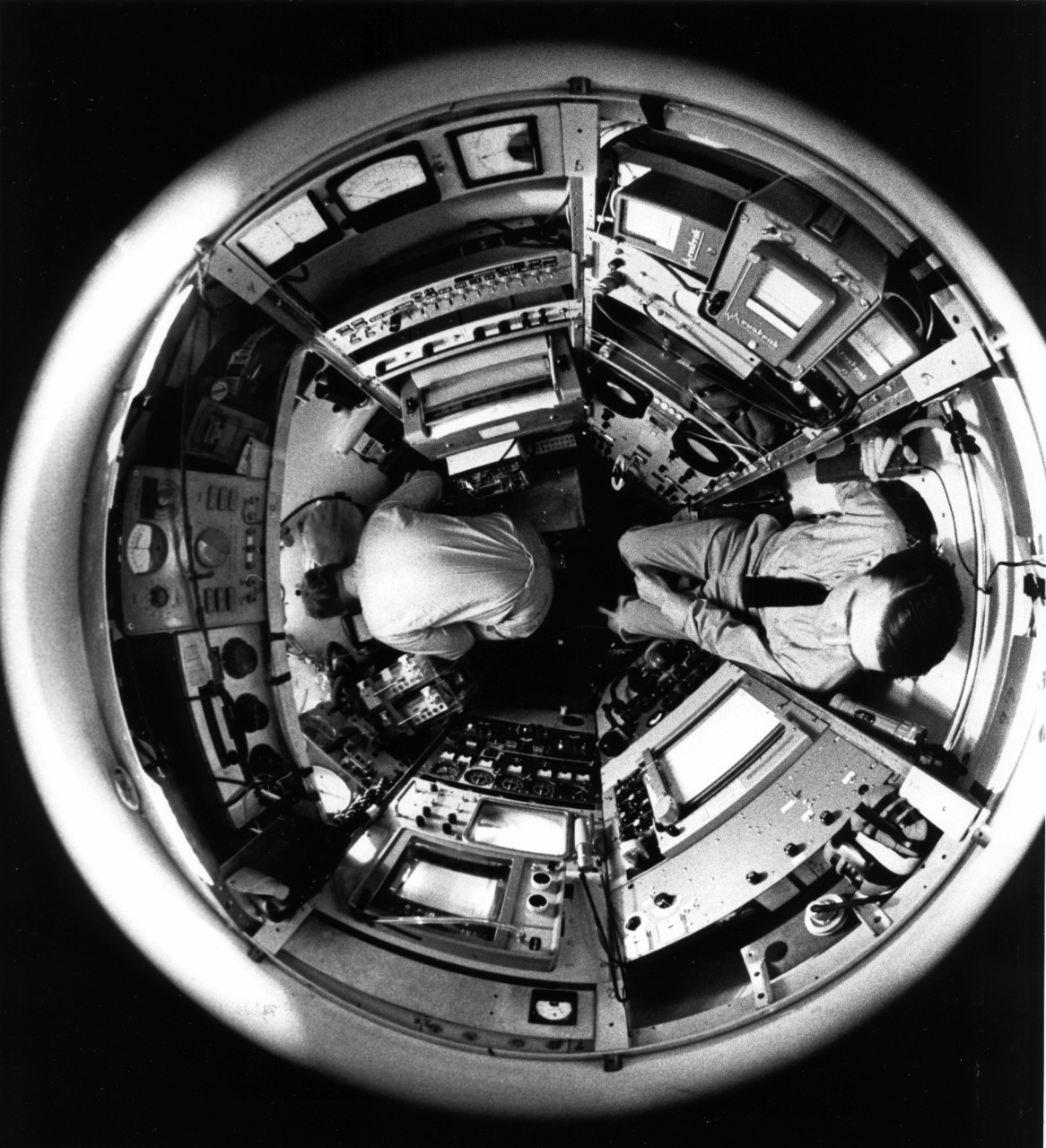 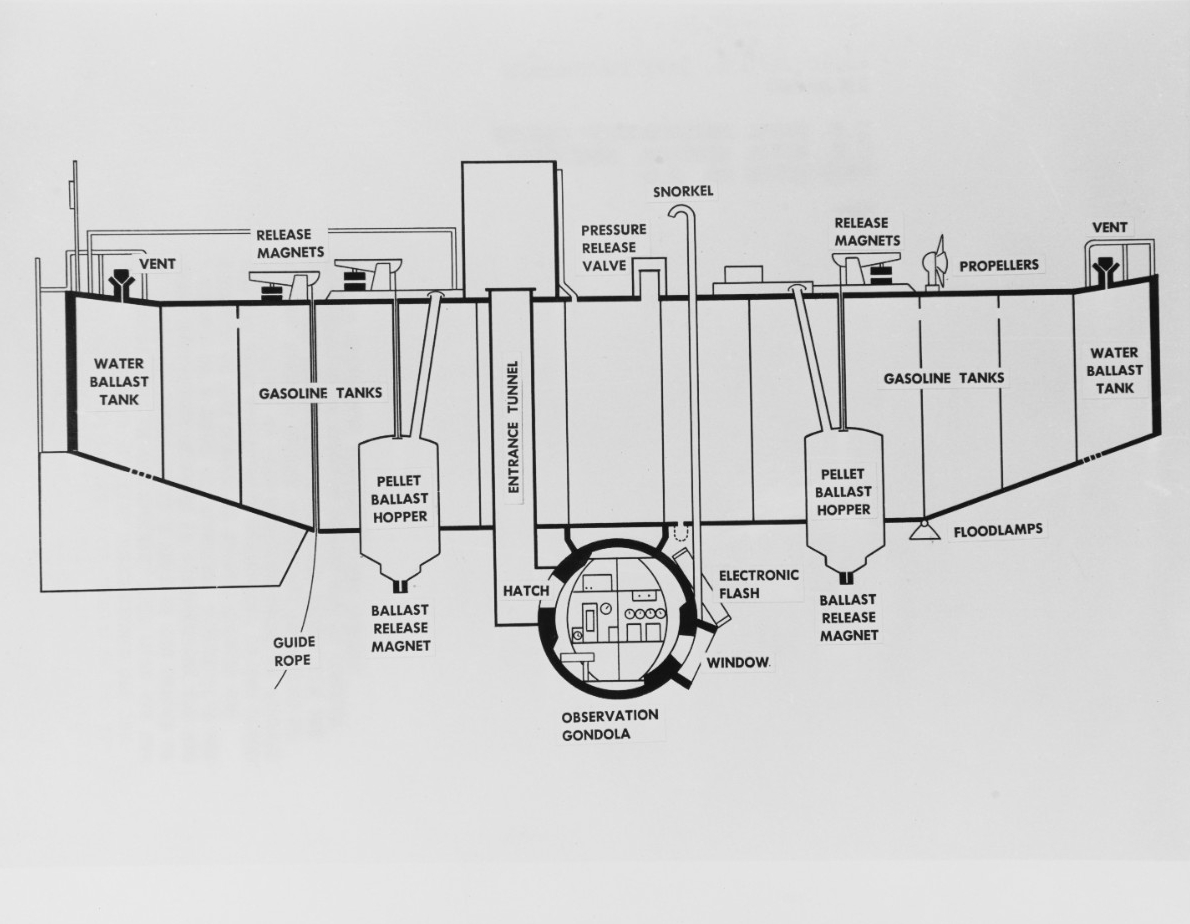 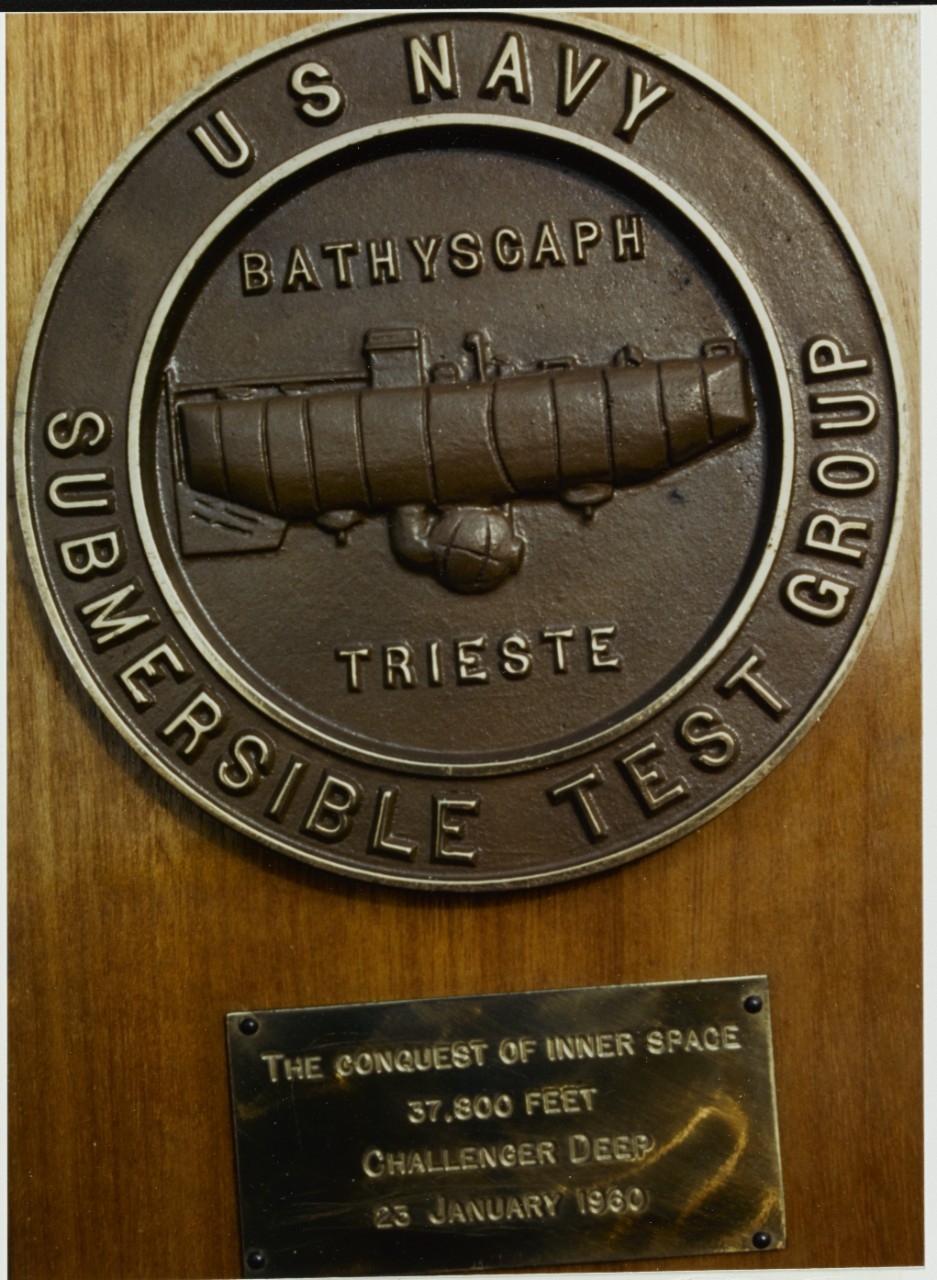 Plaque of the unit that operated the Bathyscaphe Trieste. The plaque commemorates the record dive of 37,800 feet in the Challenger Deep on 23 January 1960. “The Conquest of Inner Space. 37,800 Feet. Challenger Deep.” Navy History and Heritage Command photograph. Catalog#: NH 102603-KN.