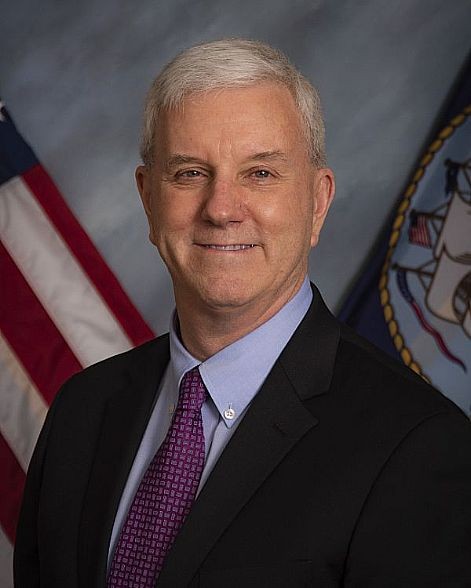 A native of San Diego, Rear Admiral (Ret.) James E. McPherson graduated from San Diego State University in 1977 with an undergraduate degree in Public Administration. He received a Juris Doctor in 1981 from the University of San Diego School of Law, and in 1991 he was awarded a Master of Laws in Military Law from The Judge Advocate General's School, Charlottesville, Virginia.

McPherson first gained military experience as an enlisted member of the U.S. Army. During over three years as a military policeman, he served at the Presidio of San Francisco, the Eighth Army in South Korea, and the First Infantry Division. In 1979, McPherson was commissioned as an ensign in the Judge Advocate General's Corps, U,S. Naval Reserve, and completed an internship at the Naval Legal Service Office (NLSO), San Diego. Upon completion of Naval Justice School, Newport, Rhode Island in 1982, McPherson was assigned as an assistant force Judge Advocate on the staff of Commander, Naval Air Force, U.S. Atlantic Fleet. In 1983, he transferred to NLSO, Norfolk, Virginia, where he served two years as a trial counsel. In 1985, McPherson transferred to Naval Air Station, Cubi Point, Republic of the Philippines, where he served as the station judge advocate.

In 1988, McPherson reported for duty to USS Theodore Roosevelt as the command judge advocate and made a North Atlantic and the carrier's maiden Mediterranean deployments. Following the completion of graduate school in 1991, McPherson reported to the NLSO, Norfolk, Virginia, where he served one year as senior defense counsel and two years as senior trial counsel. During this tour, McPherson had the distinction of both defending and prosecuting capital murder cases. In June 1994, he reported to the staff of Commander, Submarine Force, U.S. Atlantic Fleet as the force judge advocate. In December 1995, McPherson transferred to the staff of the Vice Chief of Naval Operations as the assistant for Legal and Legislative Matters. In October 1997, McPherson was assigned as special counsel to the Chief of Naval Operations. In September 2000, McPherson assumed command of Trial Service Office East, Norfolk, Virginia.

McPherson's personal decorations include the Legion of Merit (two awards), Meritorious Service Medal (four awards), the Army Commendation Medal, and the Navy Achievement Medal (two awards). Rear Adm. McPherson is a member of the bars of the U.S. Supreme Court and California.