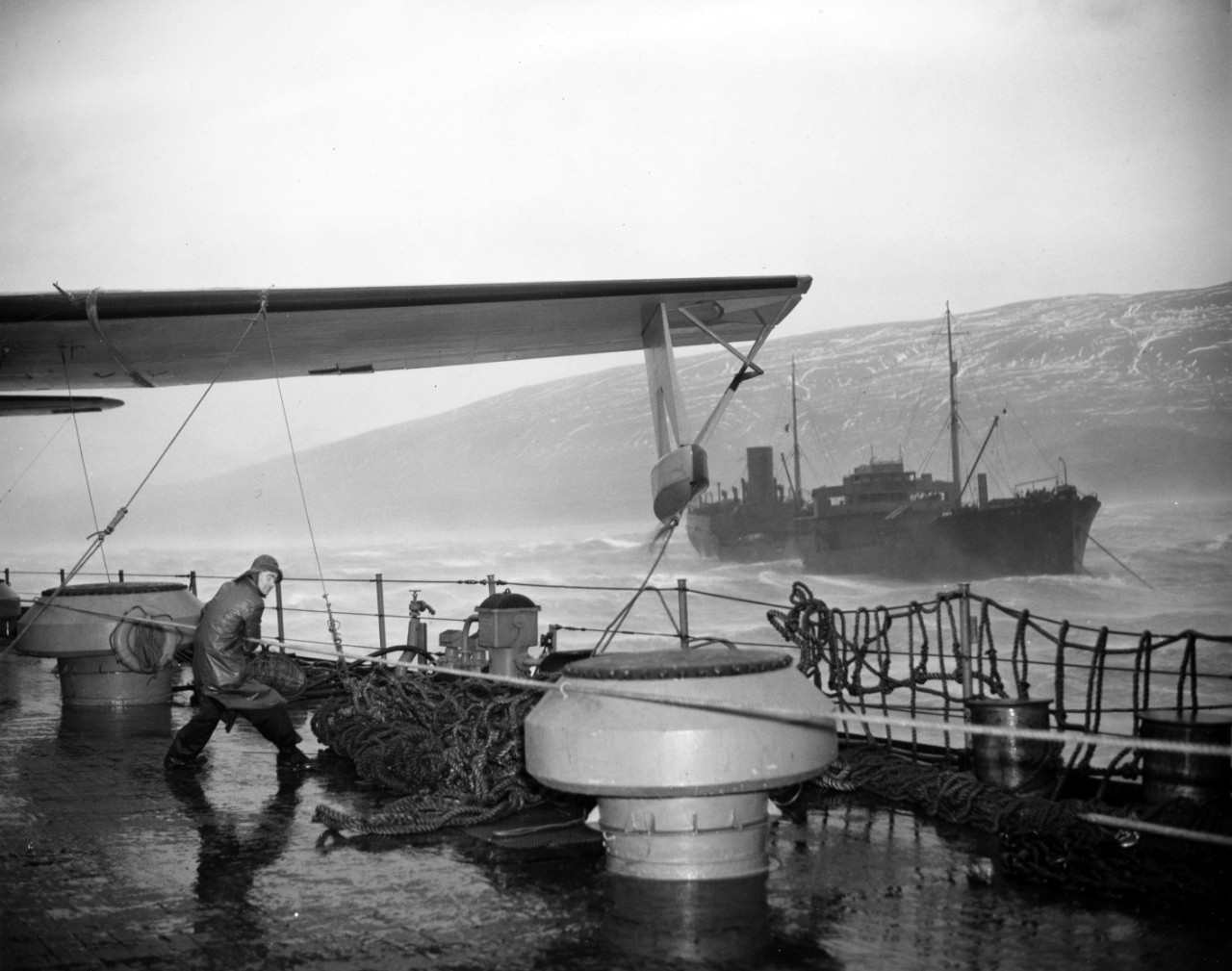 Heavy weather operations by Task Force 99 in the North Atlantic (Icealnd) during 1941. The crew of a seaplane tender struggling to secure seaplanes during a storm off the coast of Hvalfjordur, Iceland. From the VADM Robert C. Giffen photo collection. Naval History and Heritage Command photograph. Catalog#: S-487.02

Sailors have always respected the power of the ocean—especially in heavy seas. Although Navy ships are made to withstand a certain degree of bad weather, they are not indestructible. Weather-related incidents have caused massive destruction and loss of life all throughout recorded history.

The Navy’s experience with weather-related incidents is as old as the service itself. Probably the first ship lost to weather was Continental sloop Saratoga off the Bahamas with all her crew on 18 March 1781. Although most associate bad weather with open seas, it can strike anywhere. From 1810–1813, the Navy lost three gunboats in the Chesapeake Bay and a schooner in Lake Ontario. Once ships began to sail on the open seas more frequently, storms became especially dangerous. Sailors would not know a storm was upon them until it appeared on the horizon, and by then it was often too late. In September 1854, brig Porpoise was lost with at least 62 Sailors somewhere between Formosa and China due to a typhoon. During a powerful storm on 15–16 March 1889 in Apia, Samoa, the Navy lost three ships—Trenton, Vandalia, and Nipsic—by huge destructive waves called tsunamis. On 29 August 1916, armored cruiser Memphis was hit by a series of reportedly 75 feet high tidal waves in the harbor of Santo Domingo, Dominican Republic, which wrecked the ship and killed 43 Sailors.

Probably the best-known storm the Navy faced happened during World War II. On 18 December 1944, Admiral William Halsey’s Third Fleet encountered a massive typhoon northeast of Samar. Destroyers USS Hull, USS Spence, and USS Monaghan capsized, going down with nearly all hands. A cruiser, five aircraft carriers, and three destroyers suffered serious damage. Approximately 790 officers and enlisted men were lost or killed, and another 80 injured. Fires broke out on three carriers when planes broke loose in the hangers. Approximately 146 planes on different ships were lost or damaged beyond repair by fires, impact, or swept overboard. As a result of the typhoon, the Pacific Fleet established new weather stations in the Caroline Islands and, as they were secured, Manila, Iwo Jima, and Okinawa. To coordinate weather data, weather central offices were established at Guam and Leyte.

Although weather-related incidents continue to effect Navy operations to this day, advancements in technology to include satellite imagery, radar mapping, and communications have greatly reduced risks associated with sea service. Today, the Navy relies on a series of eight Atlantic, Mediterranean, Indian, and Pacific Meteorology and Oceanography Centers—Naval Meteorology & Oceanography Command—to provide weather-related information to the fleet. 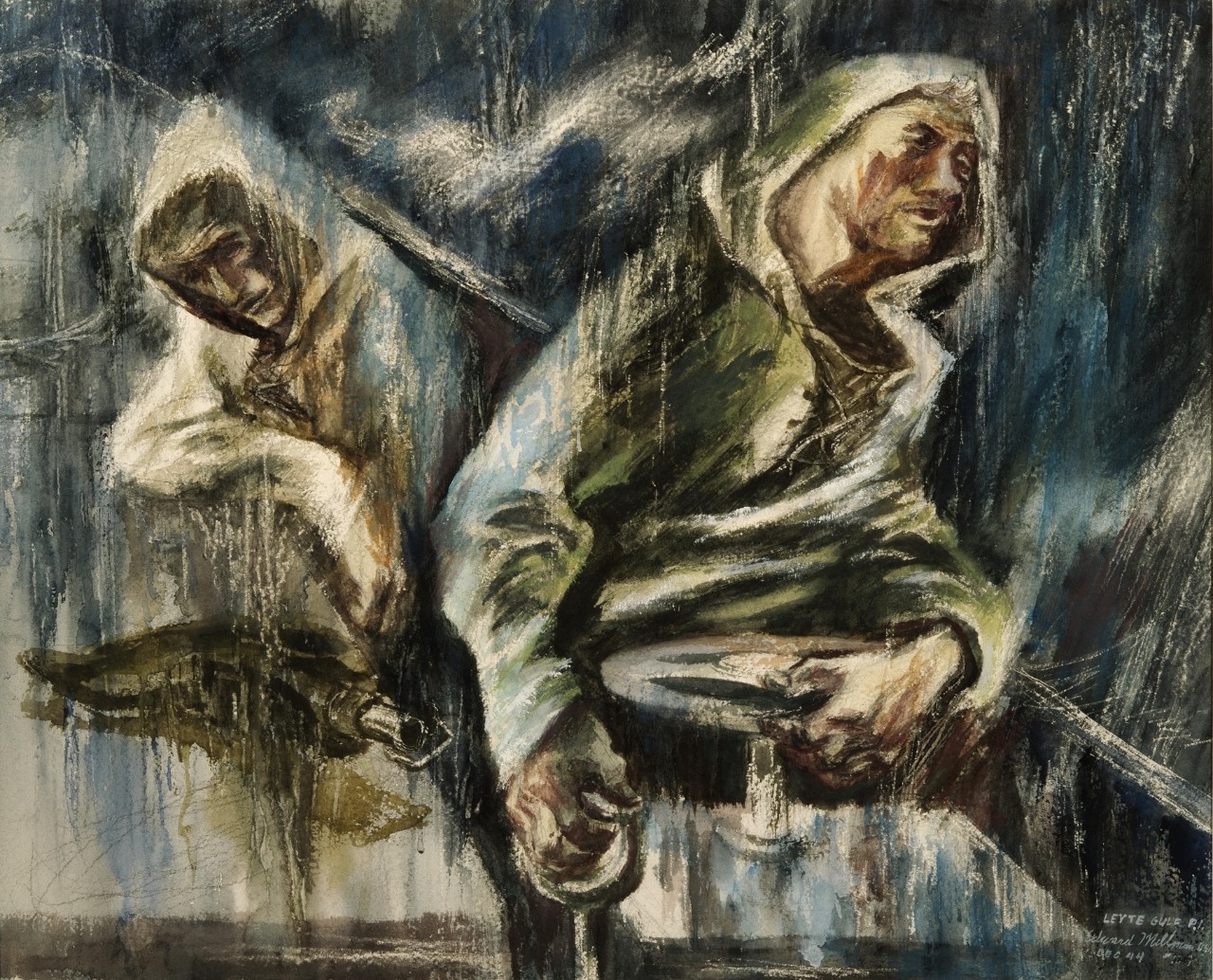 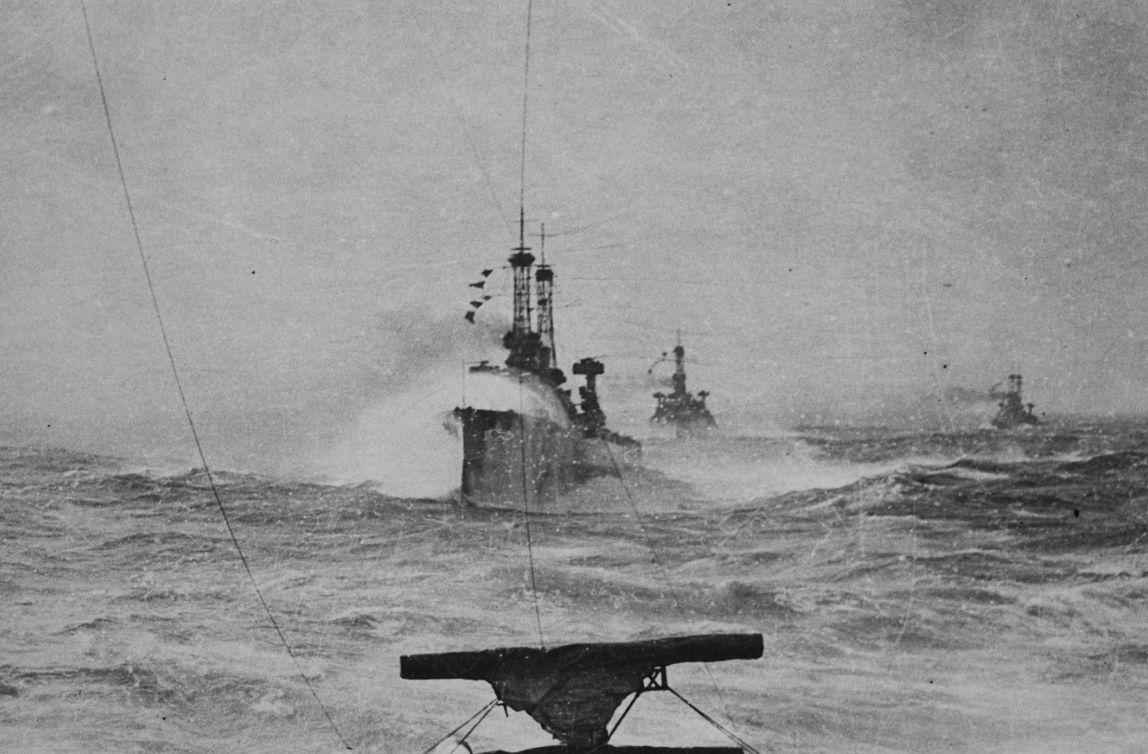 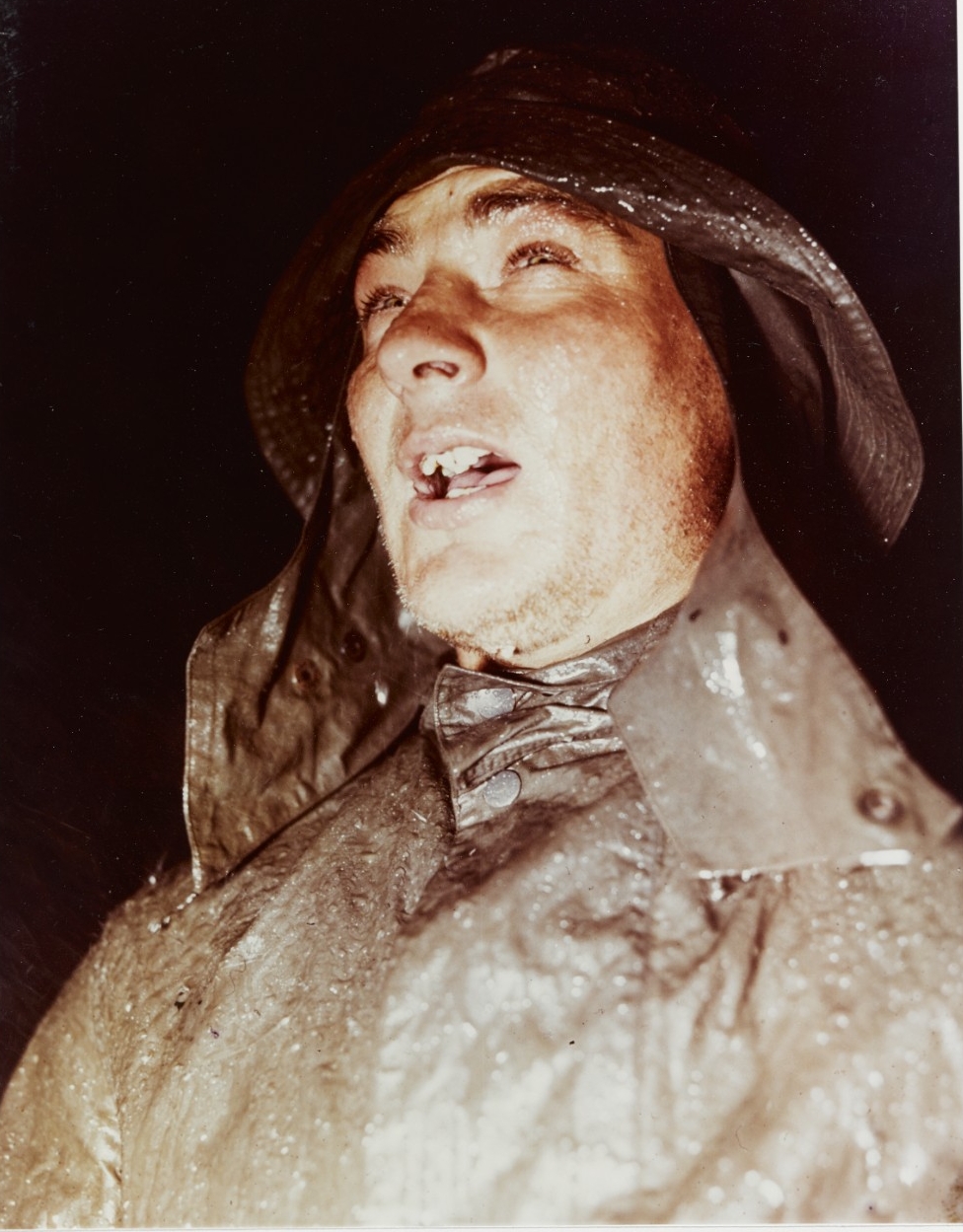 A lookout in foul weather reports the results of his examination of deck gear status during a storm at sea. Photographed prior to June 1944. National Archives photograph. Catalog#: 80-G-K-13817 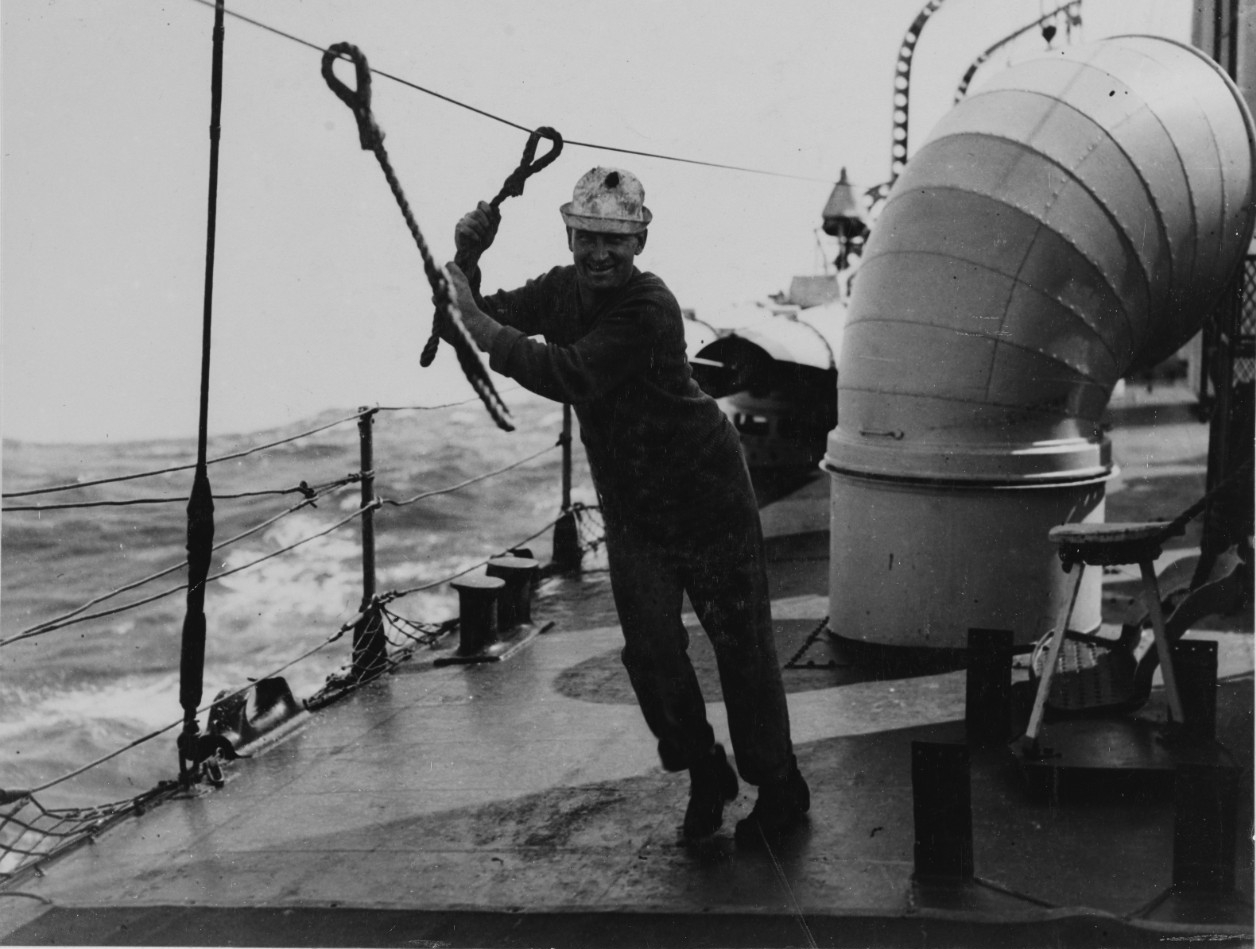 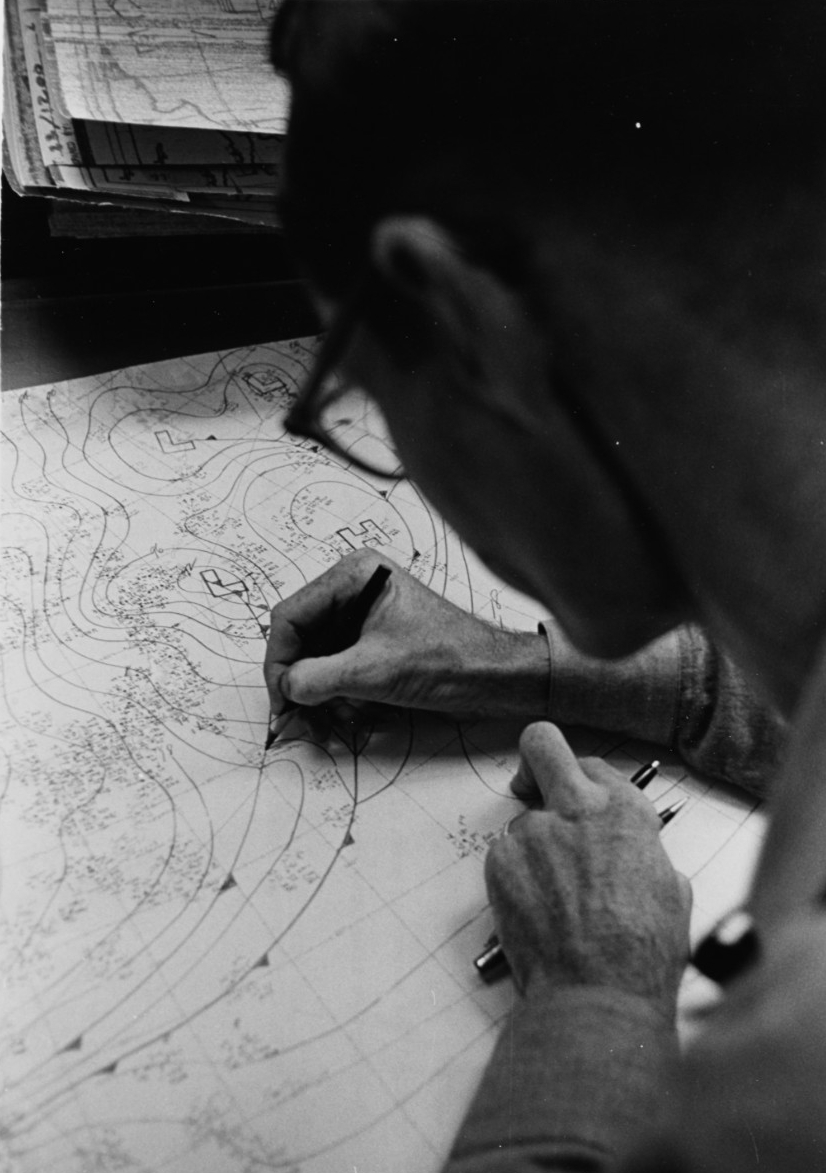 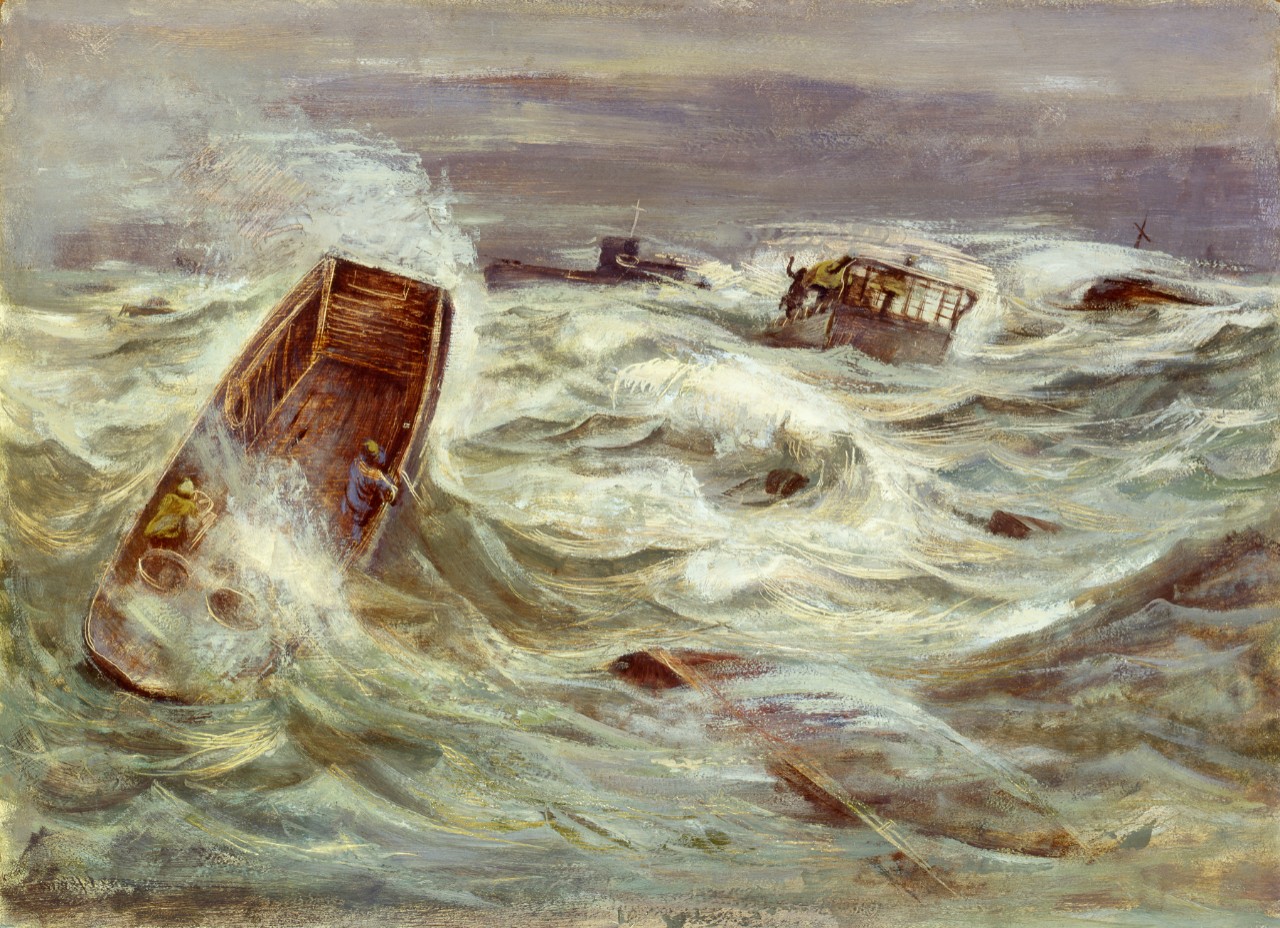 Small invasion craft were tossed about like corks in the gale that did so much damage a few weeks after D-Day. Painting, oil on board; by Mitchell Jamieson; 1944; framed dimensions 27H X 36W. Accession#: 88-193-KP 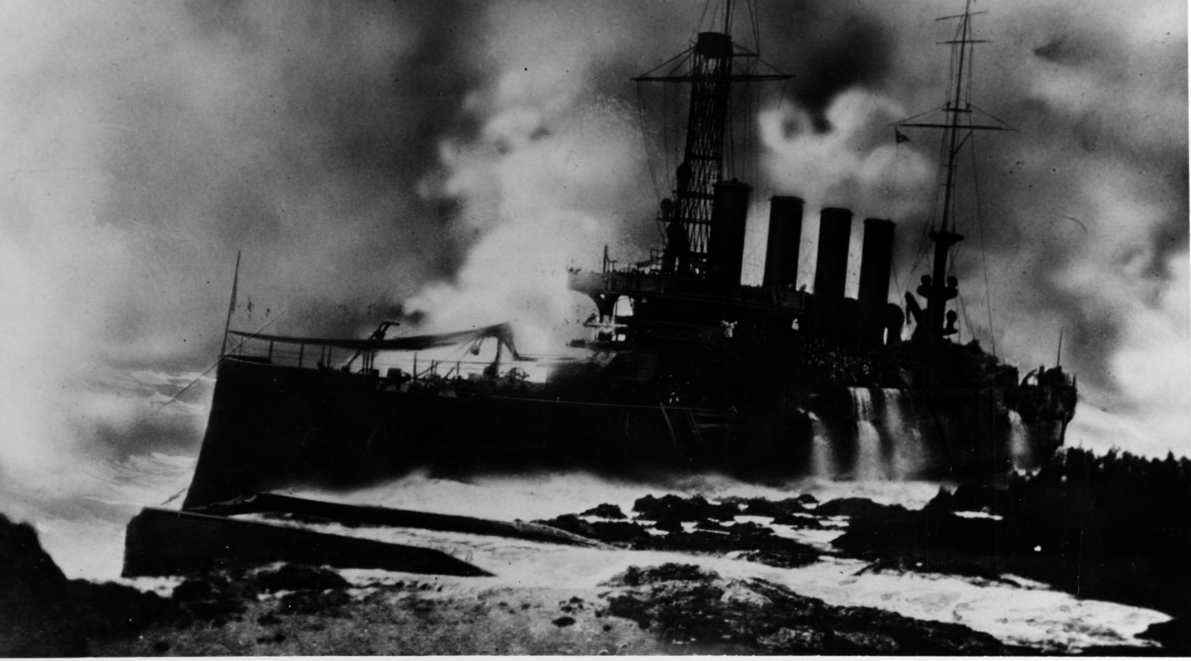 Memphis (Armored Cruiser #10) wrecked at Santo Domingo, Dominican Republic, where she was thrown ashore by tidal waves on the afternoon of 29 August 1916. This view was taken during the late afternoon, immediately after she struck. U.S. Naval History and Heritage Command photograph. Catalog#: NH 65672 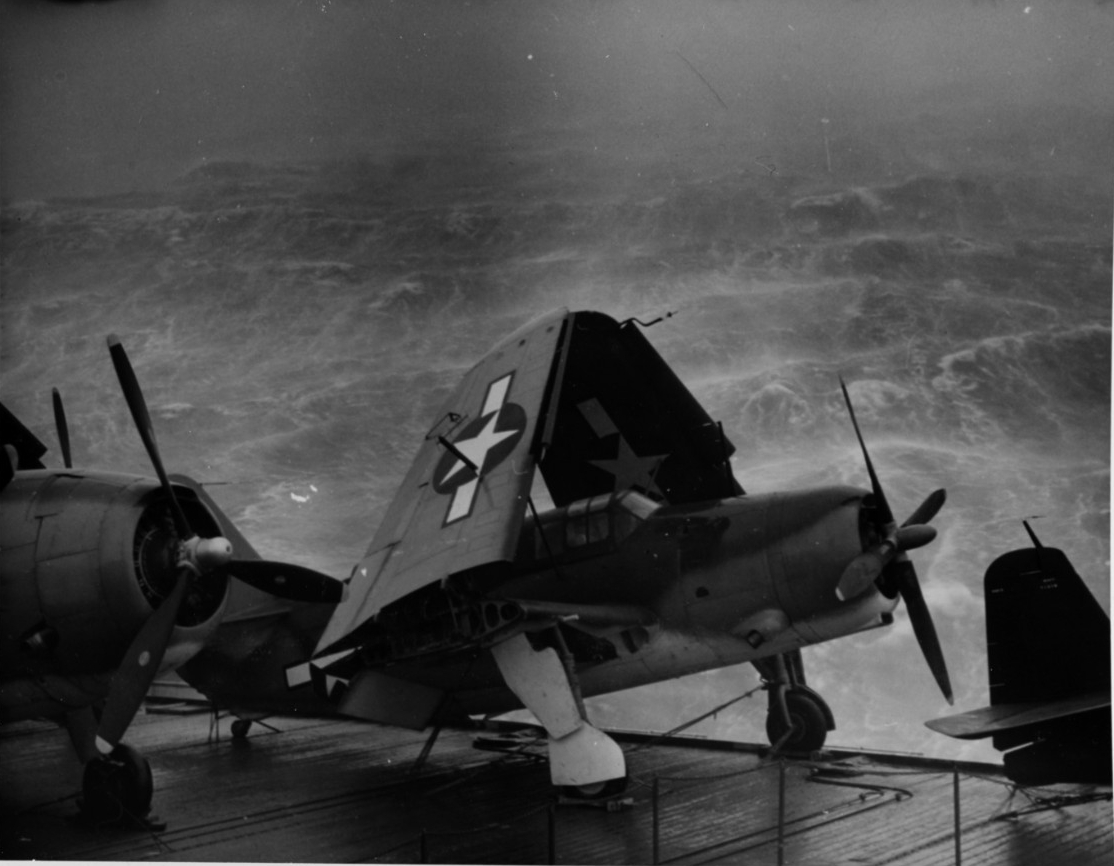 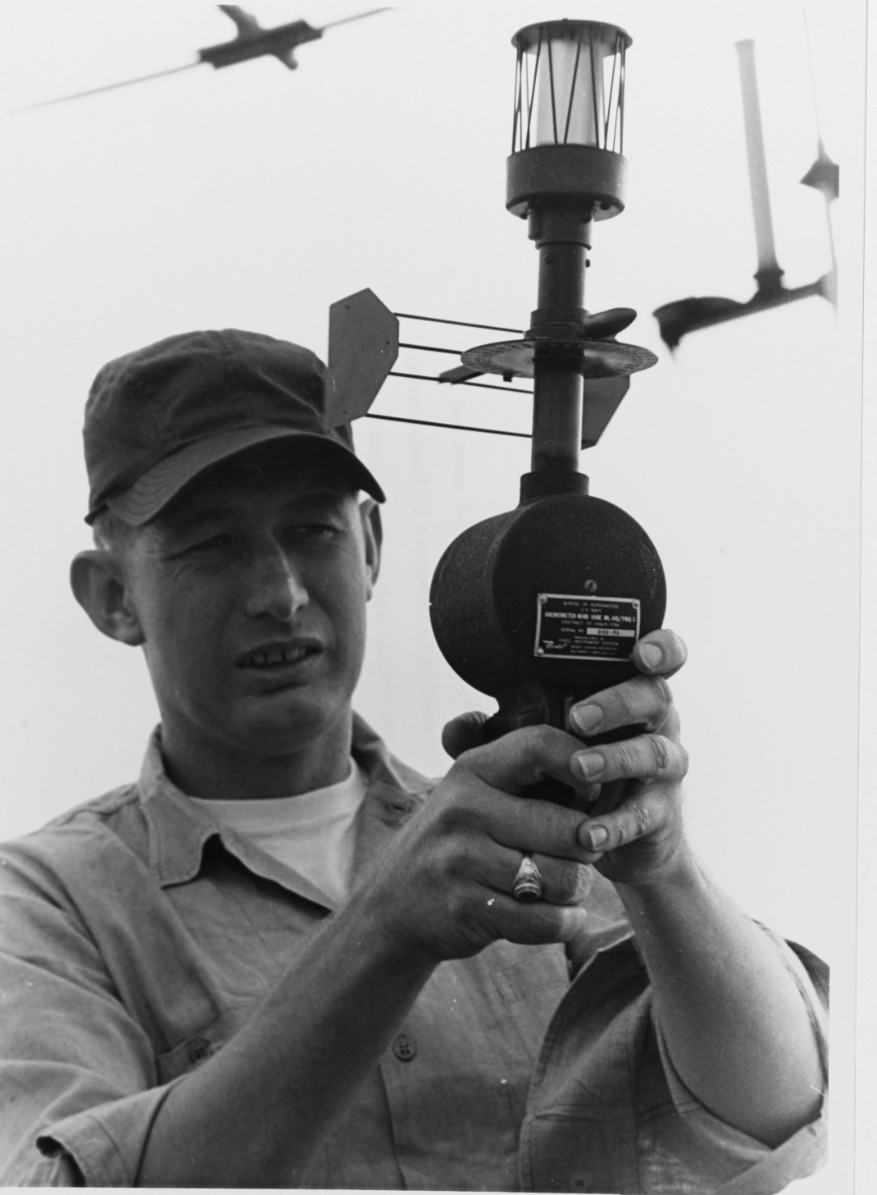 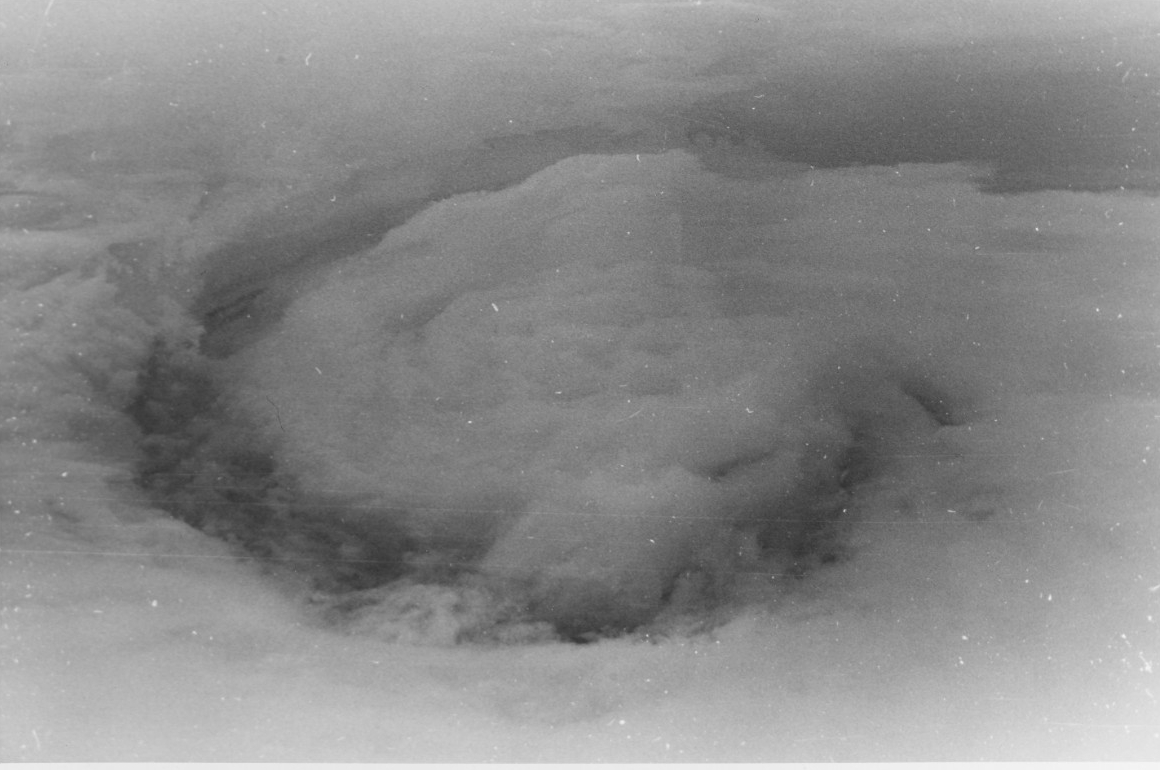 Eye of Hurricane Debbie in the Caribbean Sea, 28 August 1969. Winds were clocked at more than 145 miles an hour during the flight of a WC-121n Constellation weather reconnaissance aircraft of Fleet Weather Squadron Four (VW-4). National Archives photograph. Catalog#: USN 1142509