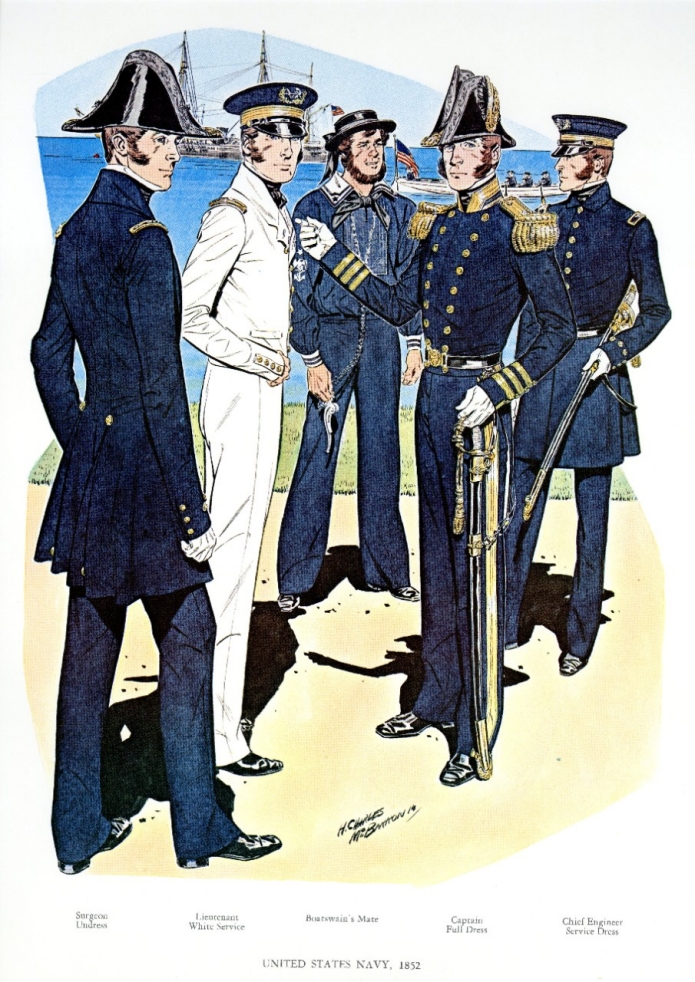 A most important period in the development of the uniform of the United States Navy was instituted in 1852 when a new regulation was issued on March the 8th. This order, with modifications prescribed the dress of the Federal Navy during the Civil War. The present system of using distinctive corps devices to identify officers of the Line and Staff, although begun in a small way in 1830, was further developed. One innovation was the employment of gold lace on the sleeves to indicate an officer’s rank, the current practice in blue uniforms. The two previous instructions had employed a few drawings to show details, but the 1852 order was the first to give pictorial information on insignia, devices, hats and to include illustrations of officers in the various types of dress. It was from 1852 that the “uniform” uniform really developed.

The painting shows the various types of uniforms specified for Line and Staff officers and some of the details of insignia. The captain in full dress is identified by the three strips of three-quarter inch lace around his cuffs, and by the inches and a half wide lace around the top of the collar and down the seams of his trousers. For a commander, the collar and trouser lace was one and a quarter inch wide and he had two strips of three-quarter inch lace on his cuffs. Both lieutenants and masters had collar lace one inch wide and lieutenants the same lace on their full dress trousers. A master was identified by a three-eighths inch gold cord on the trousers. On the cuffs lieutenants had a single strip of lace and masters none. Passed midshipmen had inch wide lace around the top of the standing collar, but none at the base and only a quarter inch cord on the trouser seams. Midshipmen, instead of gold lace around the collar had the gold embroidered anchor of 1841 set on either side.

The epaulets under the 1852 order showed indications of a commissioned officer’s rank and specialty. The reproductions of the 1852 illustrations show the devices for both Line and Staff officers. It is to be noted that the various staff corps were identified by letters in Old English characters, M.D., for the Medical Department; P.D., for pursers, and an E for chief engineers, the only commissioned members of the Engineer Corps. The decorations of the cocked hat were like those specified in 1841 except that staff officers now wore the four bullions formerly worn only by lieutenants.

The officer in the left foreground is a surgeon in the undress frock coat. He is identified as a senior member of the Medical Department by the shoulder straps. The corps device, M.D., is in the center of the strap with a gold acorn at either end. In undress, either the cocked hat or blue cap could be worn.

The Navy in earlier regulations had permitted white trousers and vests to be worn in warm weather but made no provision for white jackets or coats. The 1852 order took into account the ever widening activities of the Navy with its growing number of seagoing steam vessels and provided a white jacket to be worn aboard ship in warm climates. This first all-white uniform is worn by the lieutenant. The jacket was double breasted with the same number of small gilt buttons on the breast as specified for the full dress and undress frock coats. The cuffs were decorated only with four small buttons in the openings. The white uniform was worn with the blue cap, adorned with the proper devices, and shoulder straps for those officers entitled to wear epaulets. The distinguishing insignia of the lieutenant are his gold cap band which shows he is a commissioned combatant officer, the cap device, the oak and olive wreath with the horizontal anchor specified for officers of his grade, and masters; and the insignia on the shoulder straps, the horizontal silver anchor of his epaulets. In 1852, the only other officers permitted to wear gold lace bands on their caps were the engineers of whom only the chief engineers were commissioned.

The chief engineer in the right background is in the single-breasted coat prescribed for all engineers for undress. Full uniformity in dress had not been attained, for, while surgeons and pursers wore the double-breasted full and undress coats like their Line counterparts, engineers, the newest addition to the Navy’s family, wore a coat that showed their status. The gold cap band, the exception to the general rule that this band was reserved for combatant officers, is surmounted by the device of the Engineer Corps, the gold wheel and silver anchor in a wreath of oak and olive leaves.

It is to be noted that in full dress, the staff officers did not show the collar or sleeve lace of the Line officers with whom they had relative rank. The device for the collars and cuffs of surgeons was the sprig of three oak leaves introduced in 1847 but without the border of leaves and acorns prescribed by the 1841 order. Pursers retained the band of oak leaves around the standing collar of the 1830 and 1841 orders, but lost the strip of leaves of the 1841 instruction. They were permitted to show the embroidery on the cuffs however. Engineers had the wheel and anchor of their caps on the collar with no cuff embroidery.

The description of the uniforms for enlisted personnel in the 1852 order was almost word for word as it had been in 1841 but the cut of the clothing was changing. The official documents of the Perry Expedition to Japan in the early 1850’s contain many illustrations of drawings made during the cruise. Seamen are shown in the earlier type collar as worn by the boatswain’s mate in the painting and also in the collar worn during the Civil War, which had a close resemblance to that worn today. The order stated that blue frocks were to have the collars and cuffs faced with white and the white frocks to be worn with blue faced collars and cuffs. The order also stated that the collars and cuffs were to be stitched around with thread, so many men added decorative touches not spelled out in the instructions. Uniforms of the period show most elaborate embroidery, not only on the frocks, but also on the trousers. The bib type frock would disappear at the time of the Civil War but had been worn for many years.

The boatswain can be identified as a petty officer by the presence of the eagle and anchor device of 1841 with the star above it, prescribed in 1852. It would not be until 1866 that a system of rating badges would be introduced, so we can determine this man’s rating only by the all-covering petty officer’s device, worn on the right arm and the boatswain’s pipe.

Changes to the 1852 Regulation prior to the Civil War brought the dress of staff officers into close agreement with that of the Line. In September 1852, the Medical Department device was changed to a sprig of olive replacing the M.D. of the cap device, and the new device was worn above a gold band in the same wreath used by the Line. Under the same change pursers were given a sprig of oak as a device also to be worn above a gold cap band. The insignia was removed from the epaulets of surgeons and pursers leaving them plain. A General Order of 23 August 1856 directed surgeons and pursers to wear the same uniform as line officers with whom they ranked including the collar and sleeve lace but without the lace on the full dress trousers. In February 1861 engineers were instructed to wear the standard double-breasted coats of the Line, but only chief engineers wore sleeve lace for their assistants were warrant officers. The engineer device was changed to a cross of four oak leaves to be worn only on the cap. While it would be some time before all staff officers would be permitted to wear the dress of the Line and use sleeve lace to indicate their relative rank, a major step toward uniformity had been taken.