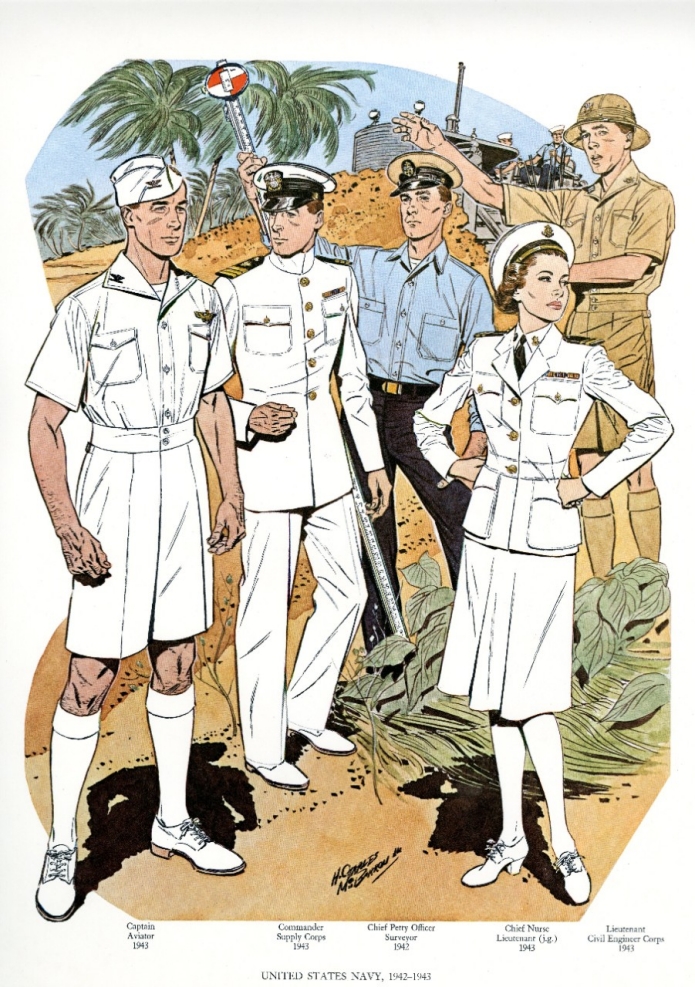 The 1941 Navy Uniforms in addition to a section on working uniforms, provided for tropical dress. The Navy’s world-wide activities prior to the entrance of the United States into World War II, many of which were in tropical and semi-tropical climates, indicated that some form of clothing, other than the white service dress of earlier instructions, was necessary. The basic tropical uniform for officers and chief petty officers consisted of shorts and short-sleeved, roll collar shirts. Shirts and shorts were either white or khaki. The head piece was the standard cap, worn with white or khaki cover, to match the uniform. Enlisted men, other than chiefs, wore shorts and white undershirts. All personnel could wear white or khaki helmets in lieu of caps or enlisted men’s white hats. Under the original instructions, no device was worn on the helmets by officers or chiefs, but in 1943, officers were directed to wear miniature cap devices. Officers and chiefs wore white shoes with the white tropical uniform and black with the khakis. Officers, however, were permitted to wear tan shoes with khakis. Enlisted men wore black shoes with both white and khaki dress. An officer’s rank was indicated in both white and khaki dress by means of miniature pin-on collar devices. A line officer showed rank devices on both collar points, while a staff officer had the corps device on the left one. Rating badges were not worn on the tropical shirts by chief petty officers so that their only means of identification was the cap device, the standard anchor/USN insignia on the front of their caps.

The captain, Naval Aviator, is shown in the official 1941 white tropical uniform with one exception. Instead of the white covered cap or helmet, his headpiece is a white garrison cap. This cap was authorized in January 1941, to be blue, white, khaki or forestry green to match the uniform. Under the 1943 change, all commissioned officers, except aviators, wore a miniature cap device on the left side and a rank device on the right. Until 28 August 1943, aviators wore a miniature aviation device on the left side of the garrison cap. Then, they assumed the cap device used by all other officers. Under the original 1941 instruction, the garrison cap was to be worn only by commissioned and warrant Naval Aviators and by chief petty officer designated as Naval Aviation Pilots. The cap was to be either green or khaki to match the winter or summer aviation uniform.

The white service uniform, worn by the commander, Supply Corps, is the outgrowth of the white drill, double-breasted jacket introduced in 1852 for wear with light weight blue trousers in tropical climates. The style of the coat, as shown, became effective in June 1901, under General Order No. 48, when the former white coat trimmed with white braid was abolished. Under usual conditions, the visor of an officer in the grade of commander, would be decorated with gold embroidered oak leaves and acorns. Under a change of 2 January 1943, officers were directed to wear caps with polished black visors, except for formal occasions. Chin straps were to be black braid instead of gold lace. These changes were brought about by the difficulty in obtaining gold lace during wartime. The shortage of lace also brought about a modification of the gold lace sleeve stripes. “Half lace,” that is from seam to seam on the outer side of the sleeves, was to be worn.

The Navy’s Construction Battalions were organized in 1942 to perform construction work overseas, replacing the civilian employees of the contractors who had been building the Navy’s bases in the Atlantic and Pacific prior to the outbreak of the war. After the Japanese attack on Pearl Harbor in December 1941, it was evident that civilians could not be employed in combat areas. A civilian bearing arms and resisting attack would be considered a guerrilla and so be liable to immediate execution. The organization of the first three Construction Battalions was authorized on 5 January 1942 by the Bureau of Naval Personnel. The total strength was to be roughly 3000 officers and men, to be drawn from those experienced in the building trades. Before the war was over, a peak of nearly 259,000 was reached. The Navy’s construction men saw action in every area of combat, and their slogan of “Can Do” was well deserved. Construction Battalions soon became “C.Bs.” and in turn, “SeaBees.”

Chapter XI of the 1941 Regulations prescribed a working uniform for officers and men. The chapter had two sections; first, dungarees for both officers and men, and second, a cotton khaki uniform for officers and chief petty officers. The khaki uniform was derived from the aviators’ dress of World War I, reinstated in 1925 for aviators and extended to submariners in 1931. The chief petty officer is shown in dungarees which were to be worn only when the work involved would soil a more formal uniform. The complete dungaree uniform consisted of a blue denim jumper; trousers of similar material, worn with a black belt; a soft-collared blue chambray shirt, and a head cover. The chief surveyor, with the jumper removed, holding a level rod for the Civil Engineer officer who is acting as chief of a survey party, can be identified as a chief petty officer only by the device on his khaki covered cap. It would not be for many years, and under a new uniform instruction, that rating badges for dungarees in dark blue against the lighter blue of the denim or chambray would be authorized. A chief surveyor, on blues or whites, would use as his specialty mark a measuring scale (target on a cut-off section of a level rod). This same device is used today.

From the creation of the Nurse Corps in 1908 until World War II, nurses, although part of the Regular Establishment, had had no rank status. A Bureau of Medicine and Surgery publication of January 1943 advised that under an Act of Congress of 3 July 1942, Navy nurses were to have relative rank with male commissioned officers as follows:

The chief nurse with the relative rank of a lieutenant (junior grade) is shown in the white service uniform described in the August 1943 instructions. The single-breasted coat has three gilt Navy buttons and four outside pockets, the lower two being of the bellows type. The blue flexible shoulder marks show only the stripe and a half of the wearer’s grade and no corps device. A metal grade device, a silver bar, is worn on the right collar tip and a miniature Nurse Corps insignia, on the left. The white visorless covered cap was circular in shape at the top. The black mohair cap band was an inch and a half wide in front, tapering to three-quarters of an inch behind. A Nurse Corps metal device was worn as a cap insignia. White hose and shoes were specified for wear with the white uniform.

The 1943 tropical khaki uniform is worn by the lieutenant of the Civil Engineer Corps. The shirt and shorts are of the same pattern as the whites worn by the Naval Aviator, but a khaki helmet is worn instead of a garrison cap. The helmet is decorated with the miniature gold and silver cap device authorized in April 1943. Although the basic 1941 instructions required black shoes with khakis, brown shoes could be worn by officers. Both short and long socks were permitted with the tropical uniforms, the colors to match the uniform.