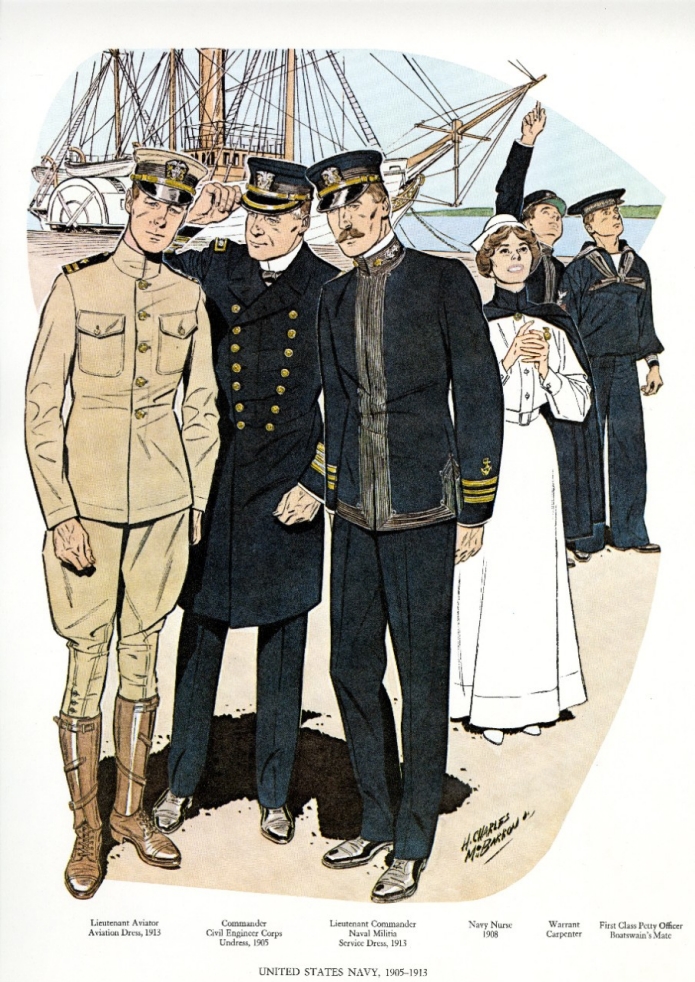 The Navy Department’s uniform instructions of 21 January 1905, for the first time since 1886 were complete with illustrations of the clothing and insignia for both officers and men. The 1897 order had contained illustrations of the clothing of enlisted men only. The 1905 order was a compilation of the 1899 uniform change and of General Order No. 48 of 27 February 1902. The latter, a very comprehensive study, slightly revised the regulations on the dress of chaplains and included a new style white service coat, as that worn today, and a white mess jacket for wear by officers in warm climates.

The Navy’s procurement of aeroplanes in 1911 led to the development of an unofficial aviation service uniform. This is another example of changes made without official sanction which later were adopted by the Navy. In late 1912, the few planes and trained personnel were ordered to Guantanamo Bay, Cuba, for training exercises with the Atlantic Fleet and the Marine Corps. Several of the officers trained in aviation were Marines who had a most practical and serviceable dress for this type of service—the Marine Corps khaki field service uniform. Under existing regulations, Naval officers serving with the Marines were permitted to wear the field uniform. Although the Marines were serving in a naval command, the naval officer commanding the aviation unit directed his naval subordinates to equip themselves with the khaki uniform. The naval personnel wore a khaki coat of the same pattern as the new white service coat, single-breasted with five gilt buttons and a standing collar. Instead of showing their grade on the standing collar as did Marine officers, the naval officers used the shoulder marks prescribed for the white service coat. The lieutenant, Naval Aviator, pictured shows the two half inch wide gold stripes of his grade on the blue shoulder marks with the gold star of the Line above the stripes. Instead of the long trousers prescribed for wear with the white service coat, the naval officers adopted the khaki breeches and leather puttees of the Marine Corps. The cap was fitted with a khaki cover and shows the officers’ cap device in front. From this small beginning developed the khaki service uniform of World War I. The unofficial dress was evidently not frowned upon since 1914 photographs of the first naval aviation training facility in Pensacola, Florida, and of the Navy in Vera Cruz in the same year show the unofficial aviation dress.

The Civil Engineer Corps commander is shown in the blue frock coat which was worn with epaulets in full dress and with shoulder straps for undress. The three stripes of gold lace indicate his grade and the light blue velvet between the gold stripes indicates that he is a member of the Civil Engineer Corps. In 1905, only officers of the Line showed a device above the sleeve lace, a gold star. The distinctive colored cloths for members of the other staff corps were:

Members of the Chaplain Corps wore stripes of lustrous black braid on the sleeves in lieu of the gold lace of other commissioned officers. The corps device for Civil Engineers, two crossed silver sprigs of two live-oak leaves and an acorn, appears in the center of the gold-edged blue shoulder strap. On either side of the corps device is a silver oak leaf, the mark of an officer in the grade of commander. The corps device was also shown on epaulets and on the collar of the blue service coat. Instead of the embroidered oak leaves and acorns of Line commanders and captains, staff officers of the same rank, except chaplains, had a plain half inch wide band of gold lace on the outer edge of the cap visor. The visor edging for senior chaplains was of black braid.

The Uniform Regulations of 25 January 1913 were the first to include a section on the dress of the Naval Militias of the several States. In 1913, the Navy Department had no jurisdiction over the State Naval Militia units although the land militia was responsible to the War Department. As a result, the 1913 instructions merely recommended a dress for the militia units. The uniform was to be similar to that of the regular Navy with modifications to indicate the non-Federal status of the officers and men. The lieutenant commander is depicted in the blue service uniform of the 1913 order with the modification recommended. Instead of the gold star of a Line officer of the United States Navy, the sleeve shows a gold foul anchor. The cap device is similar to that of the regular Navy but in place of the shield of stars and stripes, the State seal is employed, in this case the seal of the State of Illinois. The collar insignia, the gold oak leaf of the lieutenant commander with the silver foul anchor behind it is identical to that of the regular Navy. USS Wolverine long served on the Great Lakes as a training ship for members of the Naval Militia and regular Navy recruits.

The Navy Nurse Corps was established by an Act of Congress of 13 May 1908. Under the law, the Corps was to consist of a superintendent to be appointed by the Secretary of the Navy, and as many chief nurses, nurses, and reserve nurses as were deemed necessary. Although the uniforms for members of the Nurse Corps did not appear in the Navy Uniform Regulations until 1941, orders on clothing were issued from time to time by the Surgeon General of the Navy. The first such order which can now be located is dated 1924, but contemporary photographs do permit a good representation of the costume worn before that time. The nurse is shown in the typical white shirtwaist and long skirt of the nursing profession of the early 20th century. A photograph of the first Navy nurses, the so-called “Sacred Twenty”, shows the white costume, topped off with a variety of white caps, evidently those awarded by the different nursing schools. The first distinctive device employed to identify members of the Navy Nurse Corps was a round, button-like pin, with a shield of red and white stripes superimposed on a gold foul anchor. Below the shield/anchor device appeared the letters “U.S.N.”. Another item usually seen on a Navy nurse’s white ward uniform was a gold watch pinned on the left breast. The blue cloak, also typical of the nursing profession, was for outdoor wear.

Under the recommendations of Chapter 9 of the 1913 Regulations, there was little to indicate whether a warrant officer was of the regular or non-regular establishment. The carpenter of the Illinois Naval Militia wore the same gold carpenter’s square on the collar of his blue service coat as did his opposite number in the United States Navy, and his cap device, two crossed gold anchors, was that worn by both chief warrant officers and warrant officers of the regular Navy. Only in the case of boatswains, gunners and machinists, warrants and mates, was it possible to determine a man’s regular or non-regular status. Men of these ratings in the United States Navy wore a gold star on their sleeve, while those of the militias replaced the star with a gold foul anchor. Only chief warrant officers in 1913 had sleeve lace, half-inch stripes broken at intervals with dark-blue silk weaving.

The 1913 instructions for the dress of enlisted personnel of the State Militias proposed the same uniforms as worn by men of the Navy with the addition of a distinguishing mark, a lozenge with a vertical foul anchor. For blue clothes, the lozenge had a blue field and was outlined in white with a white anchor in the center; the colors were reversed for wear on white clothing. The militia mark was worn half way between wrist and elbow on the sleeve opposite the one on which the rating badge or branch mark was placed. Since the First Class Petty Officer Boatswain’s Mate is a member of the seaman branch, the rating badge—three scarlet chevrons, white eagle and specialty mark, two crossed anchors—appear on the right arm. The cap ribbon also was used to show connection with the Naval Militia. If a man were assigned to a ship loaned to the State by the Federal Government, the ribbon showed the name of the vessel flanked by the Militia lozenge. If not assigned to a ship, the ribbon showed the word “Naval Militia” and the initials or abbreviation of the name of the particular State.