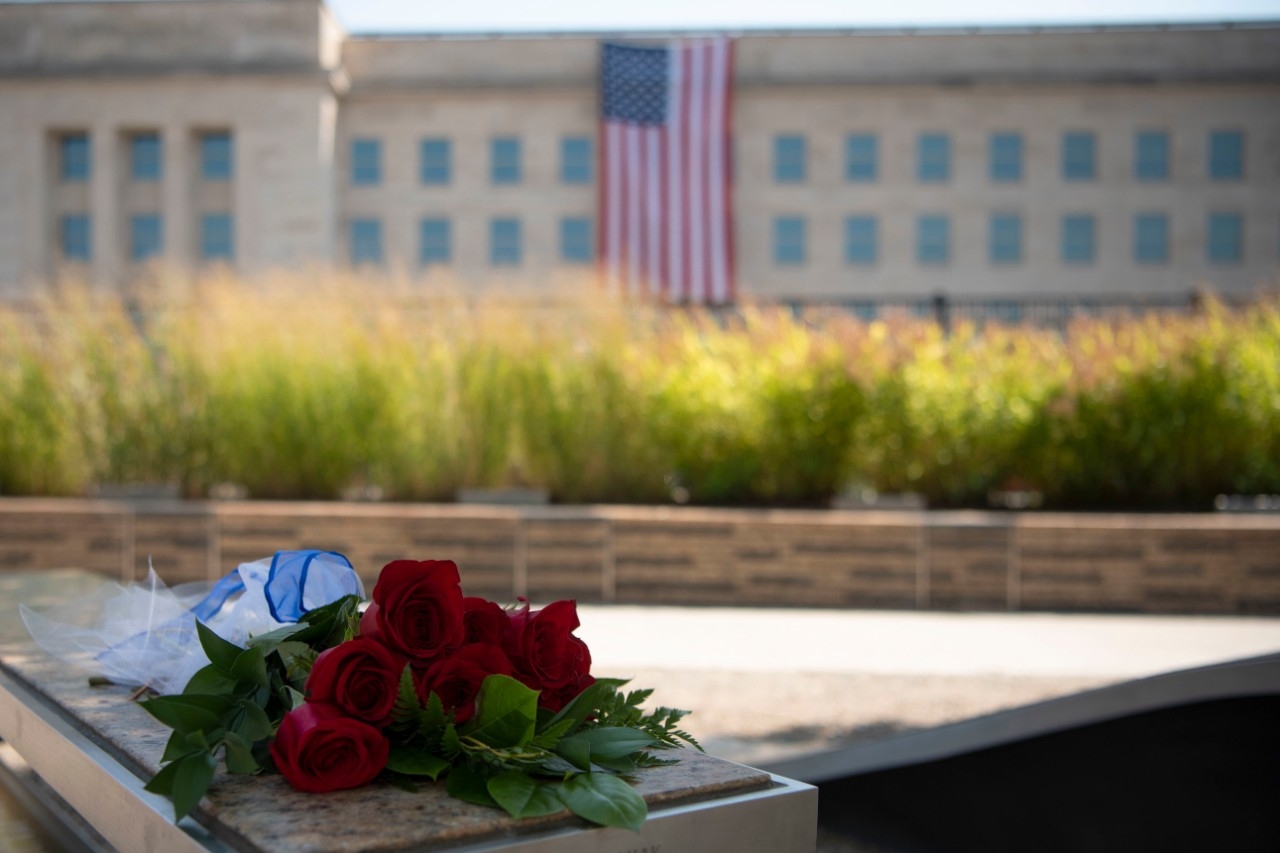 A bouquet lies on a bench at the National 9/11 Pentagon Memorial at the Pentagon in Arlington, Virginia, 11 September 2019. Department of Defense photo by Lisa Ferdinando.

On the morning of 11 September 2001, 19 terrorists from the Islamist extreme group al Qaeda hijacked four commercial aircraft and crashed two of them into the North and South Towers of the World Trade Center complex in New York City. A third plane crashed into the Pentagon in Arlington, Virginia. After learning about the other attacks, passengers on the fourth hijacked plane, Flight 93, fought back, and the plane was crashed into an empty field in western Pennsylvania about 20 minutes by air from Washington, D.C. The Twin Towers ultimately collapsed, due to the damage from the impacts and subsequent fires. Nearly 3,000 people were killed from 93 different countries. Most of the fatalities were from the attacks on the World Trade Center. The Pentagon lost 184 civilians and servicemembers and 40 people were killed on Flight 93. It was the worst attack on American soil since the Japanese attacked Pearl Harbor in 1941.

After the Taliban refused to turn over the mastermind of the attacks, Osama Bin Laden, Operation Enduring Freedom officially began 7 October 2001 with American and British bombing strikes against al Qaeda and Taliban forces in Afghanistan. Initially, the Taliban was removed from power and al Qaeda was seriously crippled, but allied forces continually dealt with a stubborn Taliban insurgency, infrastructure rebuilding, and corruption among the Afghan National Army, Afghan National Police, and Afghan Border Police. Bin Laden would go into hiding for nearly 10 years.

In the immediate aftermath of the attacks on 11 September, the Department of Defense and all of the branches of the Armed Forces began efforts to document the attacks. The Naval Historical Center (the predecessor of NHHC) activated its reserve unit, Navy Combat Documentation Detachment 206 (DET 206) to assist in the documentation efforts. Over the next ten months, DET 206 reservists and NHC Historians interviewed hundreds of individuals who were in the Pentagon on the day of the attack or were directly involved in the Navy’s response and the work that followed. The Navy Archives has received permission to release a portion of the oral histories to the public for the first time since they were recorded. The oral histories that have been authorized for release can be found at the link above.

Navy Combat Documentation Detachment 206: Documenting the Experiences of the Navy in New York City After 9/11

The oral histories document the experiences of Navy personnel in New York, New Jersey, Connecticut, and Rhode Island on the day of the attacks and in the days and weeks following.

CDR Dwyer was the head of medical services on the USNS COMFORT in September 2001.  His oral history documents the service of USNS COMFORT in New York City following the attacks.

The oral histories focus on the experiences of Naval Staff on duty in London at Naval Forces Europe (CINCUSNAVEUR) on 9/11, as well their work in the aftermath and their observations on foreign reactions to the attacks.

DET 206 reservists deployed to Norfolk in December 2001 to document CINCLANTFLT and SECONDFLT operations leading up to September 11, the immediate response following the attacks; and operations in the days and weeks after the attacks.  The oral histories in this collection offer overlapping and complementary perspectives. 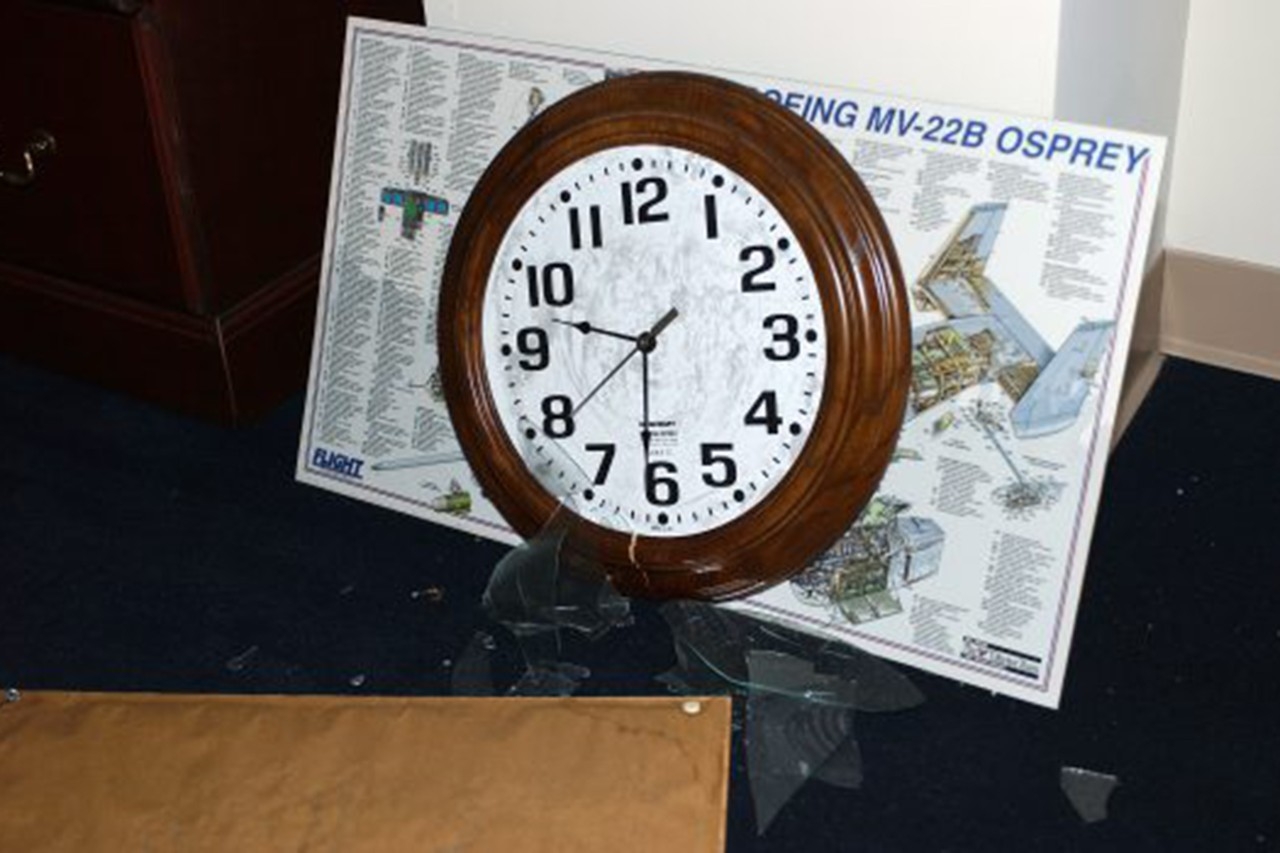 A clock, frozen at the time of impact, sat on a desk inside the Pentagon following the terrorist attack on 11 September 2001. Photo by Air Force Staff Sgt. Larry A. Simmons. 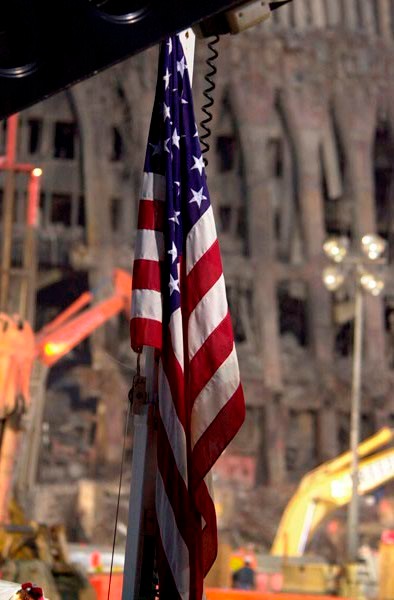 Devastation at the World Trade Center site in New York City, in the aftermath of the 11 September 2001 terrorist attack. National Archives identifier, 5609777. 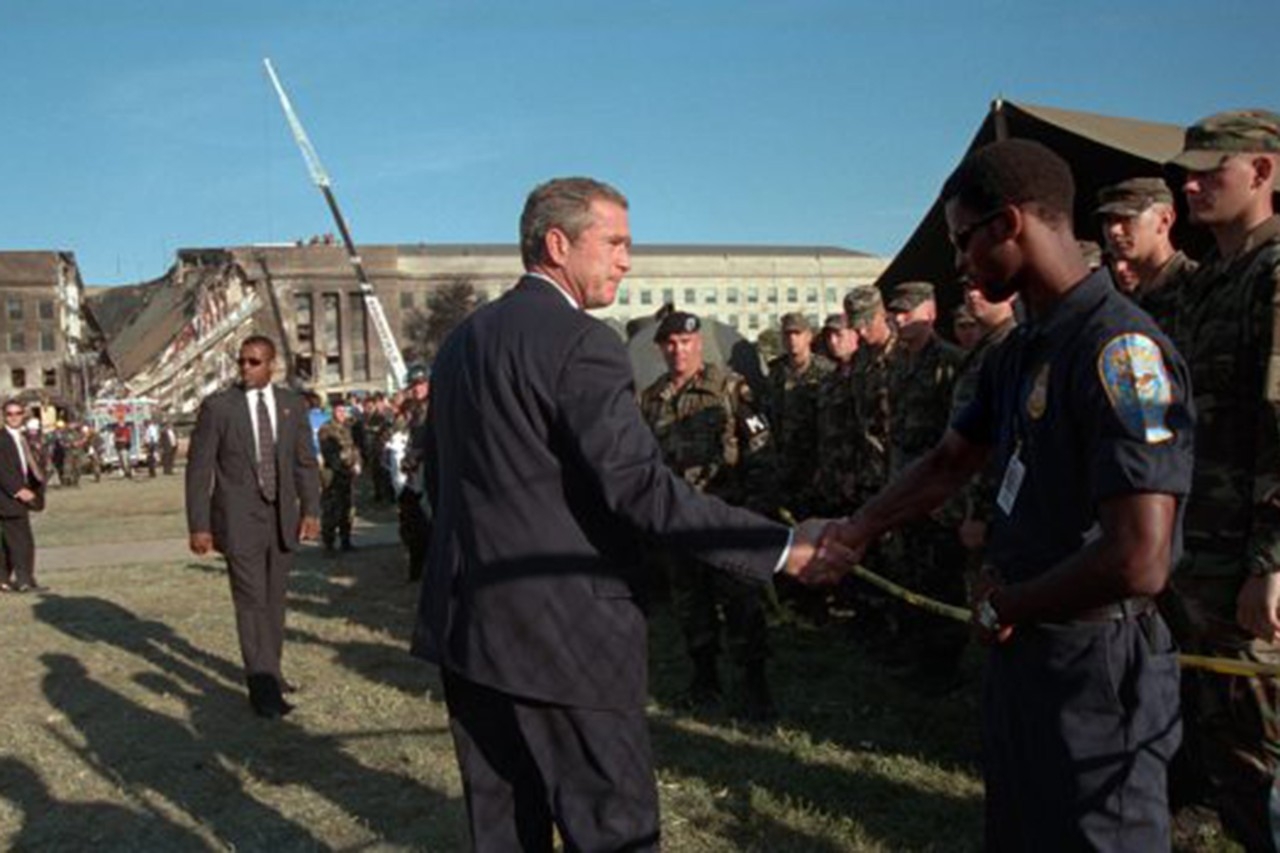 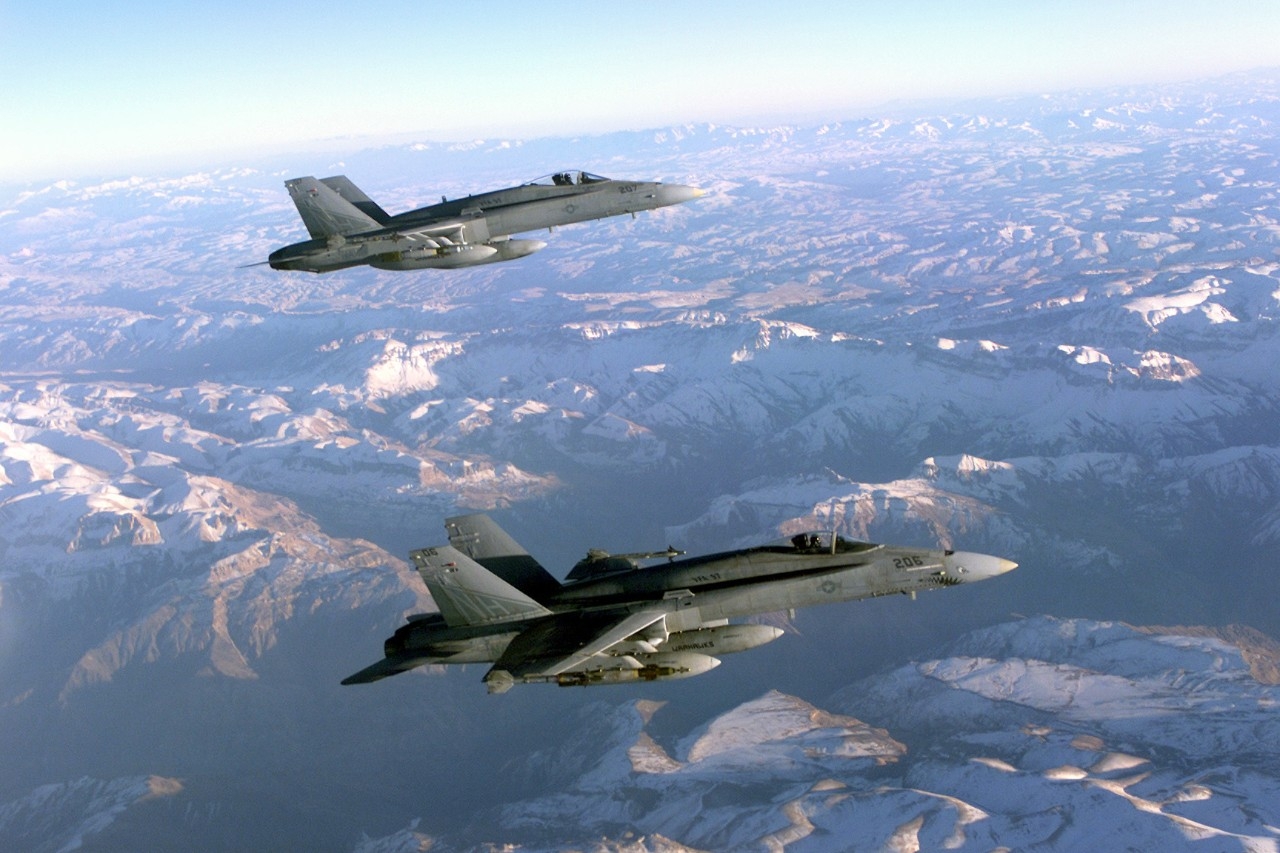 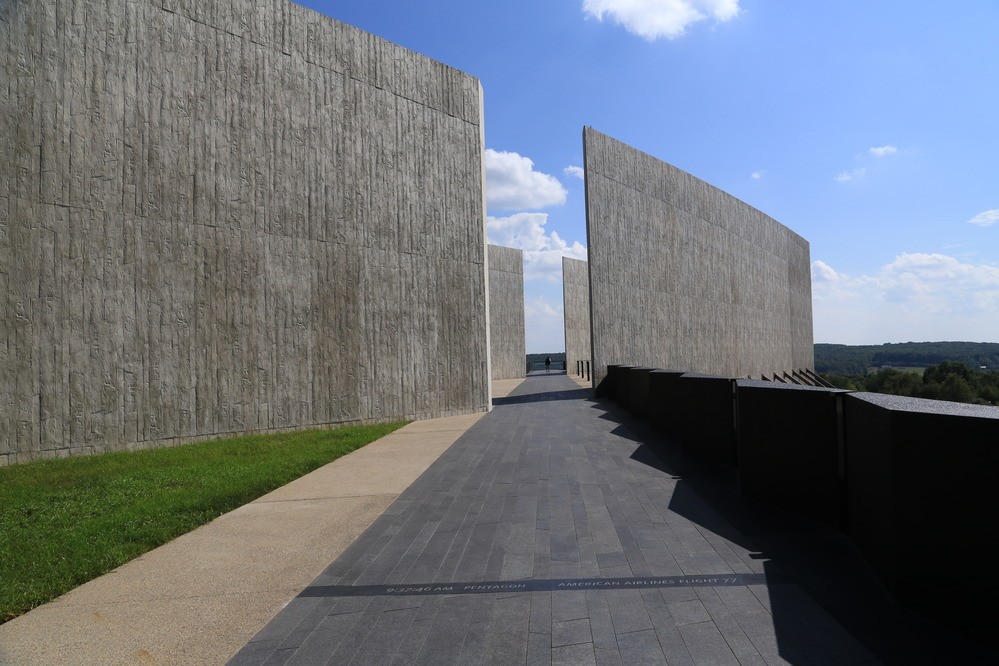 The tall gray walls are the walls of the Visitor Center at the Flight 93 Memorial near Shanksville, Pennsylvania. The black walkway is the Flight Path Walkway. The Flight Path Overlook is beyond the second set of walls. National Park Service photograph. 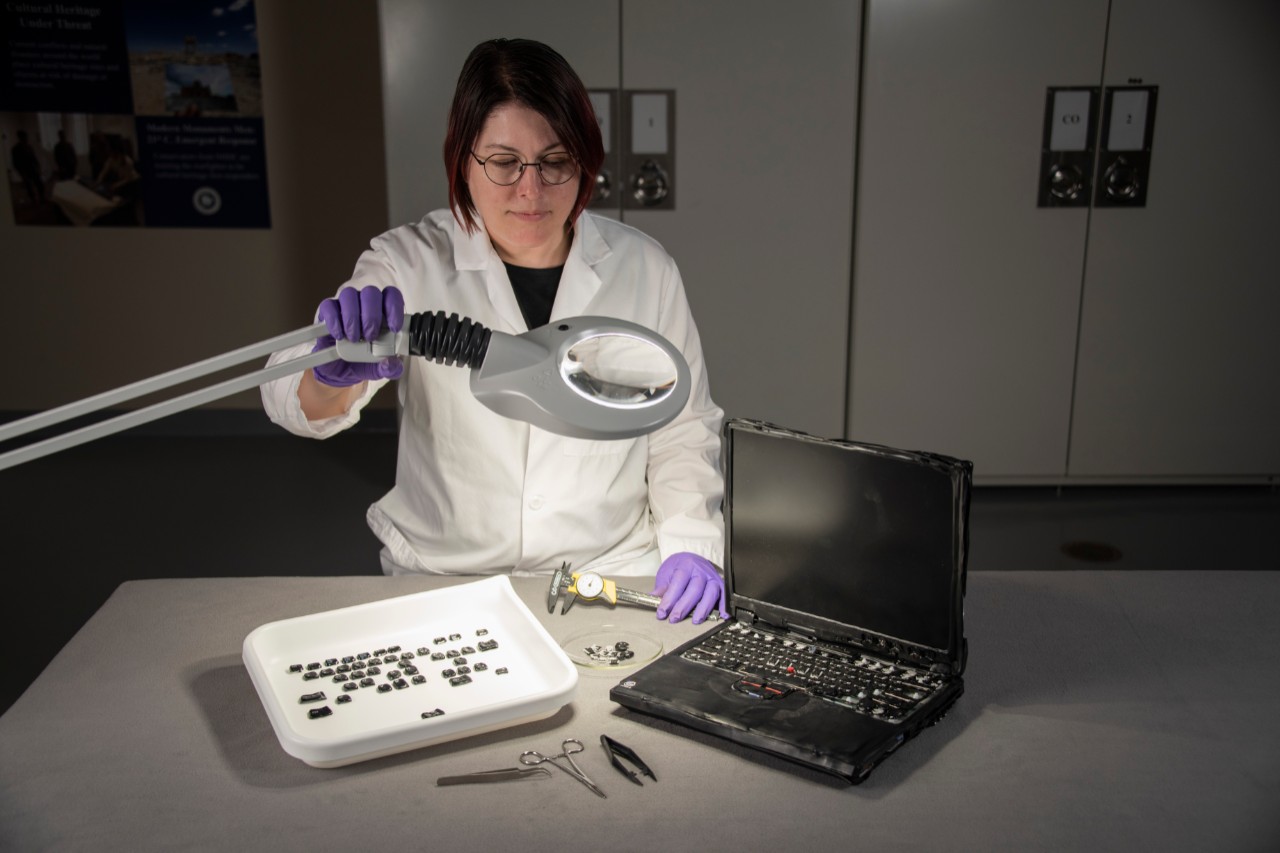 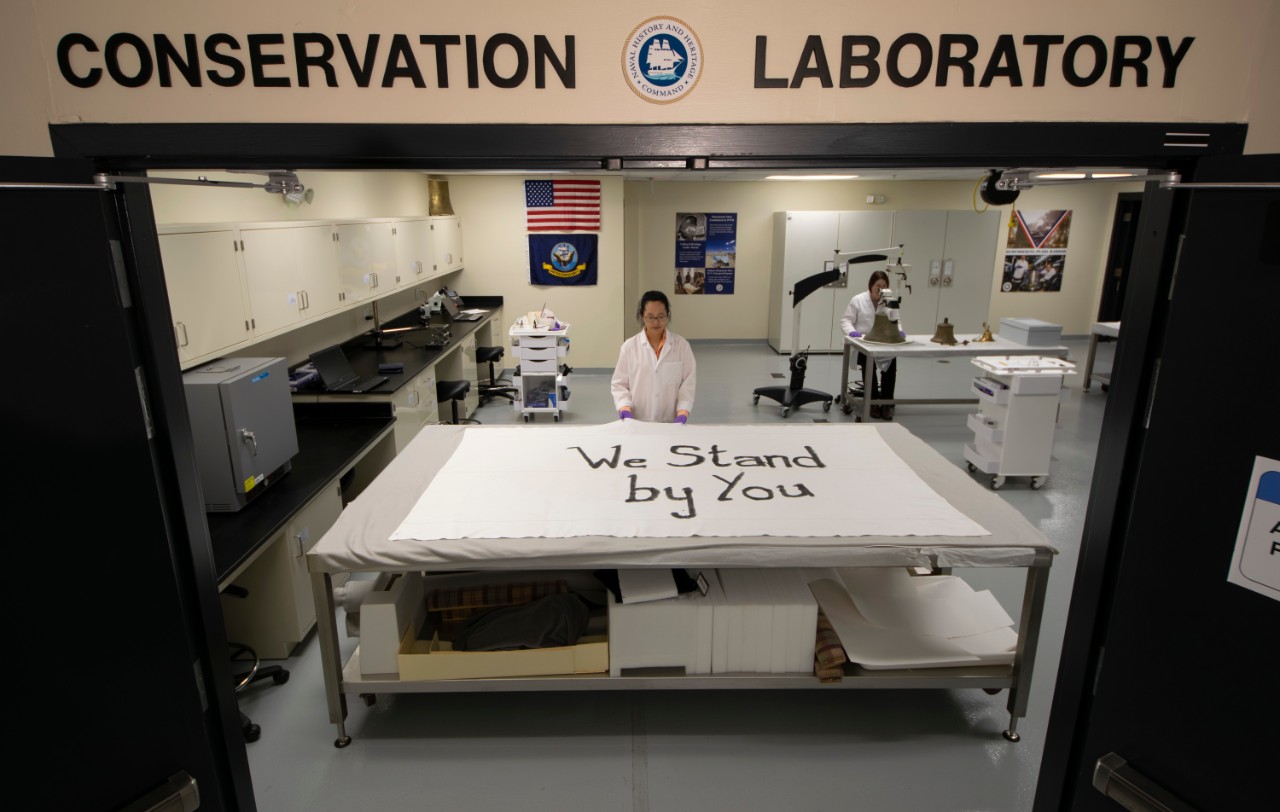 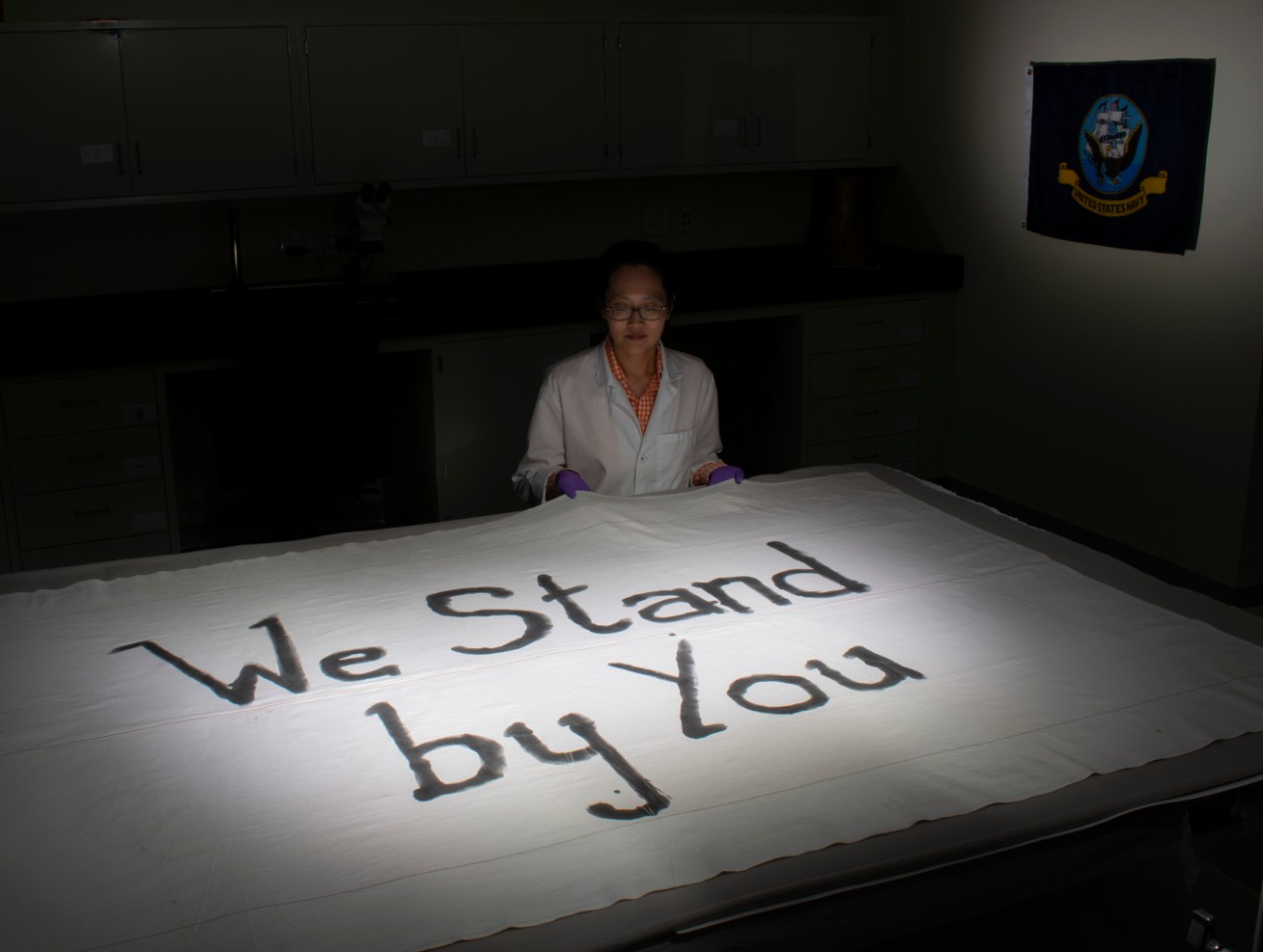 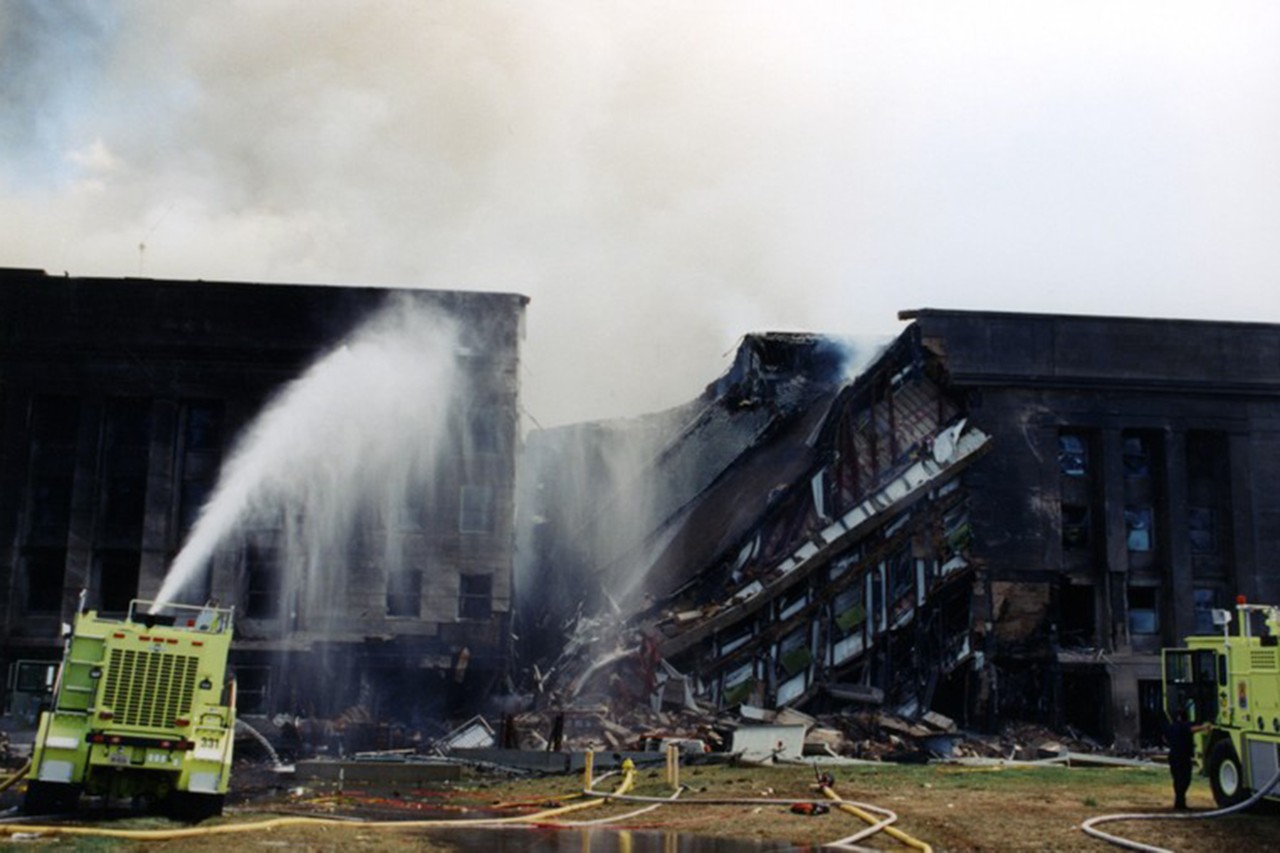 Emergency response teams responded to the Pentagon following a terrorist attack on 11 September 2001. Photo by the FBI. 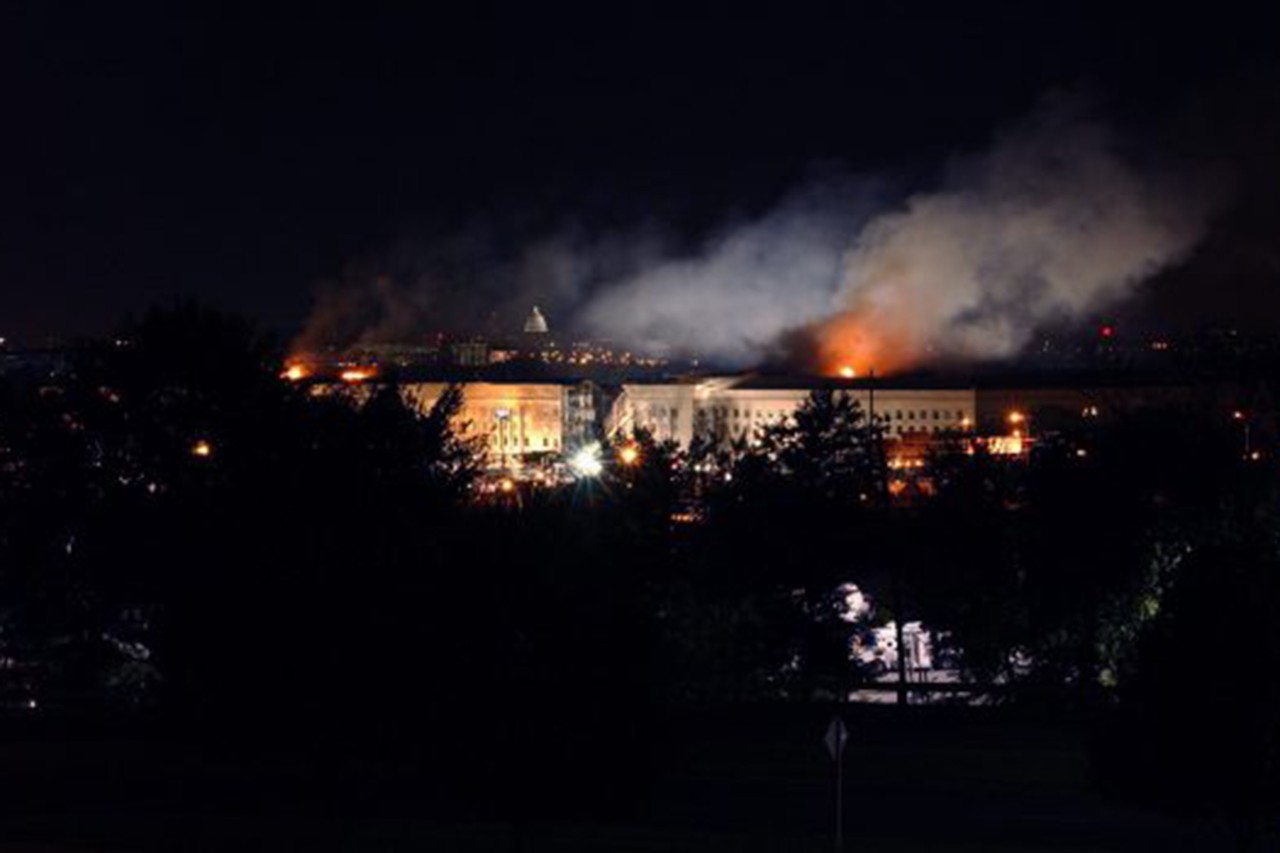 Smoke and flames in the Washington, DC, skyline in the aftermath of the terrorist attack on the Pentagon, 11 September 2001. Photo by Petty Officer 2nd Class Robert Houlihan. 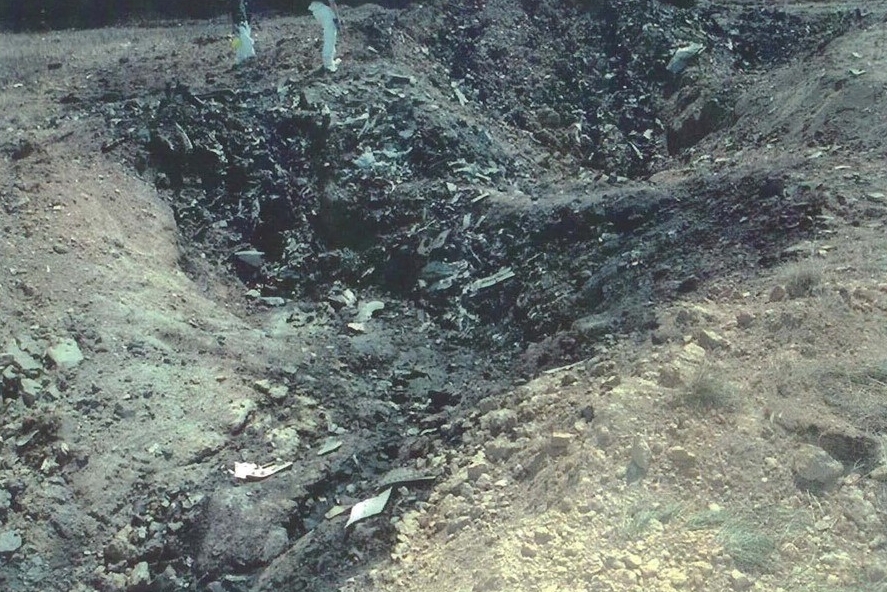 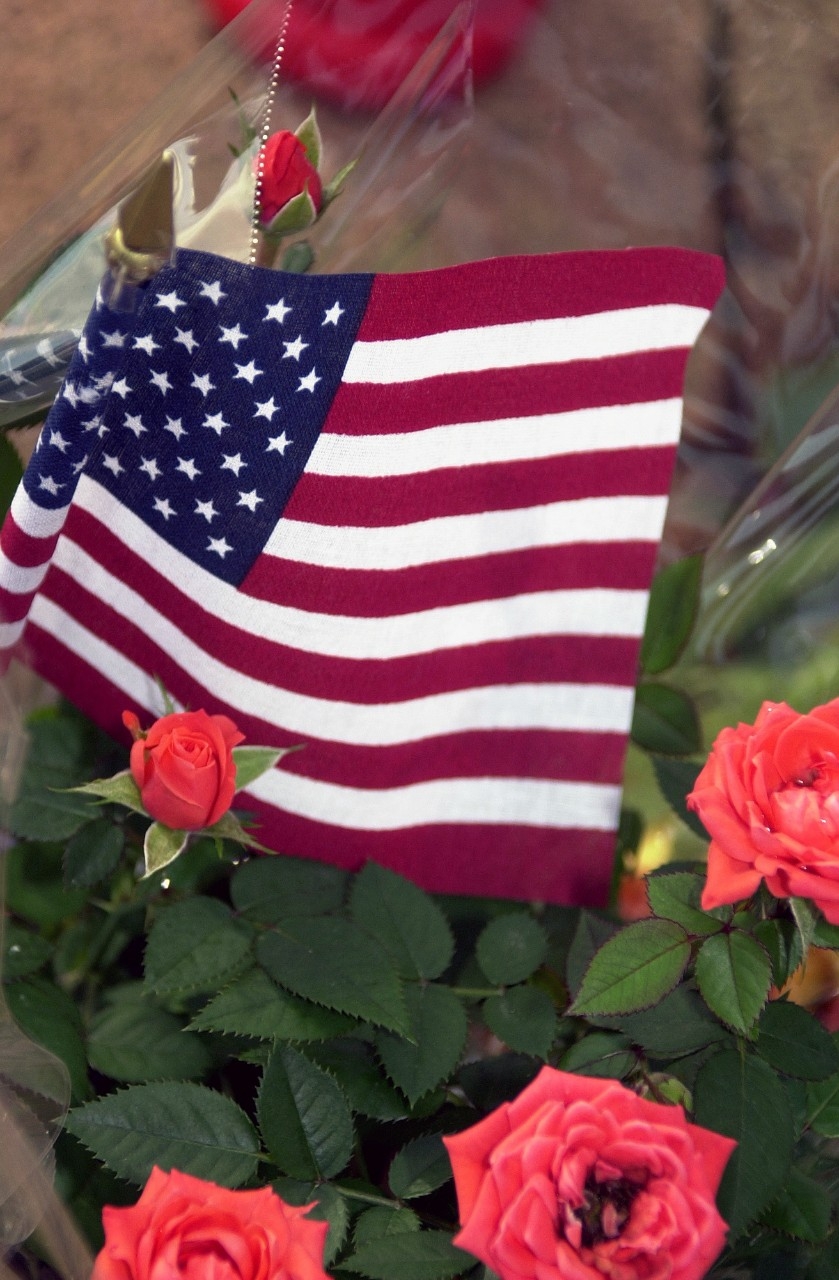 An American flag was among the mementos left by German citizens who marched from Ramstein Village to Ramstein Air Base on 14 September 2001. The march was a show of support and empathy for the victims of the terrorist attacks on the World Trade Center’s Twin Towers and at the Pentagon. Hijackers deliberately flew civilian airliners into the buildings, killing themselves, the passengers, and thousands on the ground, 11 September 2001. National Archives identifier, 6598788. 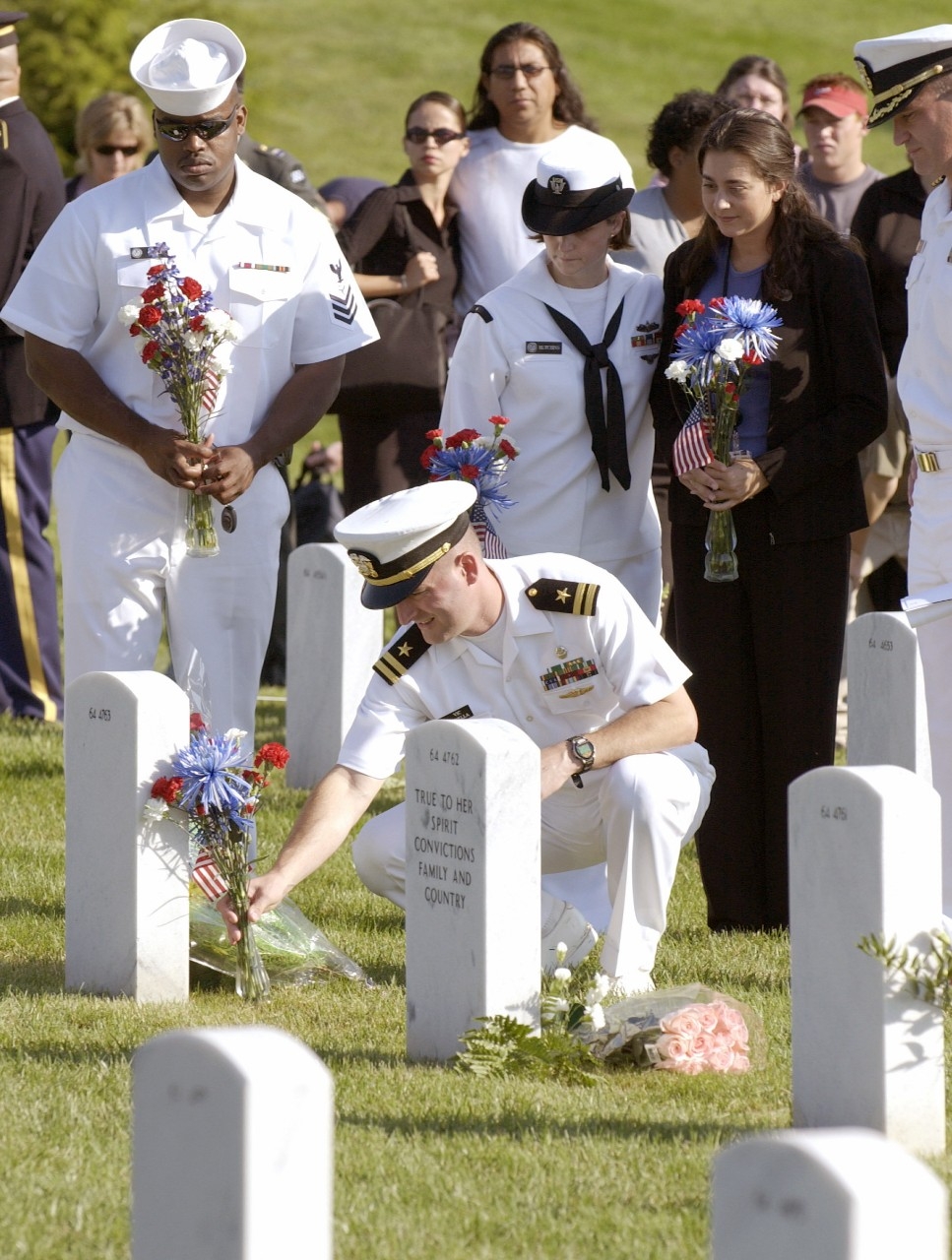 A U.S. Navy lieutenant dropped to one knee and placed flowers on a gravesite, while family, friends and coworkers of the 184 victims of the 11 September 2001 terrorist attack on the Pentagon, look on during a memorial service at the Arlington National Cemetery, 11 September 2003. National Archives identifier, 6647599. 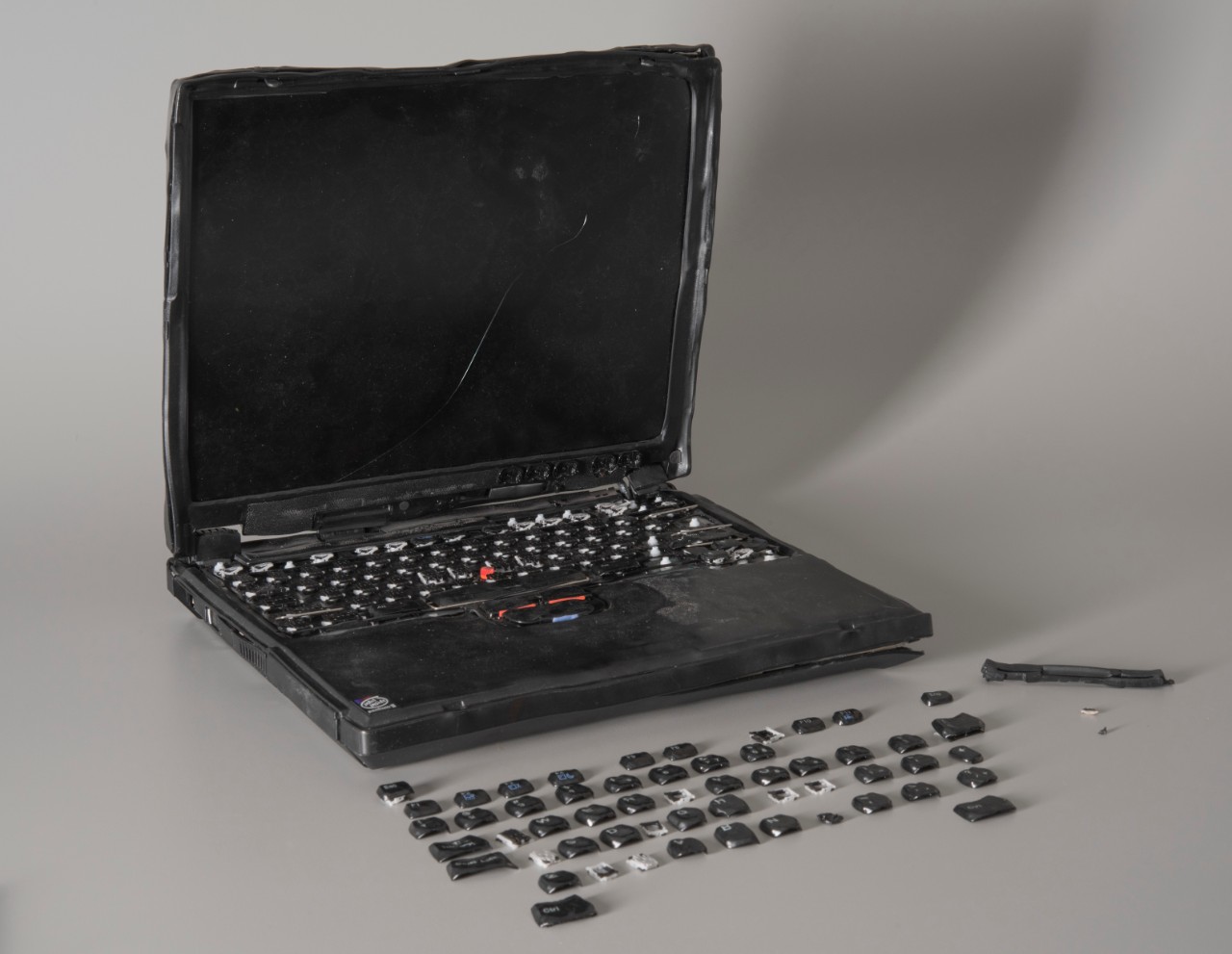 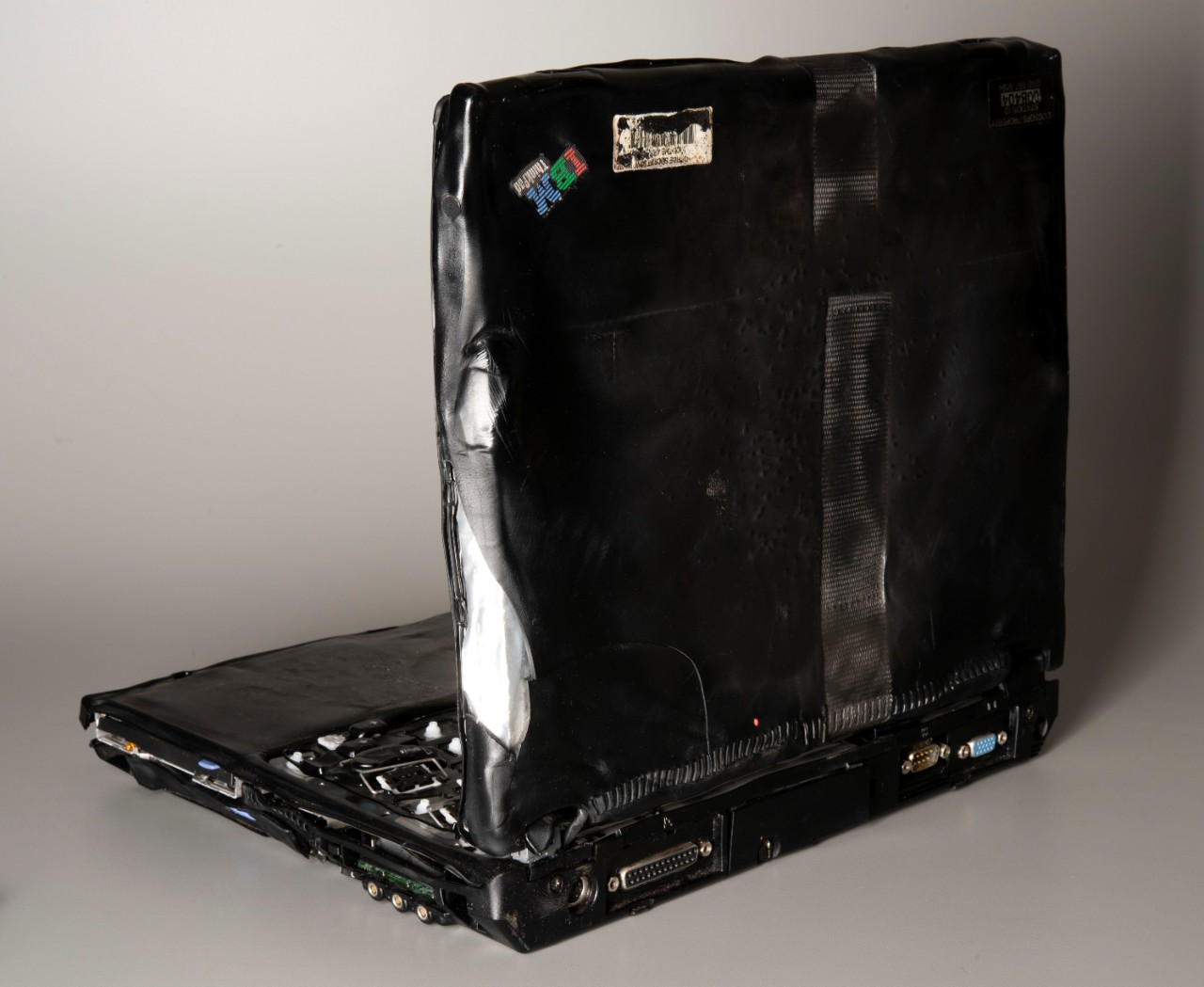