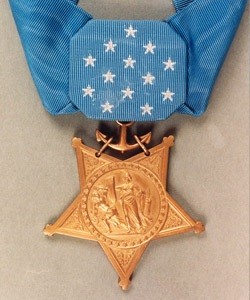 The Medal of Honor is the highest-ranking United States combat award, with different patterns used by the Navy, the Army and the Air Force.

Authorized in December 1861 as an award for enlisted men, the Navy Medal of Honor originally served to "further promote the efficiency of the Navy." Its award criteria subsequently included "deeds of gallantry and heroism in times of War and of Peace" on the part of officers and enlisted personnel, but in 1942 were restricted to acts of extraordinary heroism in armed combat.

The design of the medal and its associated ribbon have also varied, with the pattern presently used having been adopted in 1942.

The following Navy Medicine personnel have been awarded the Medal of Honor.