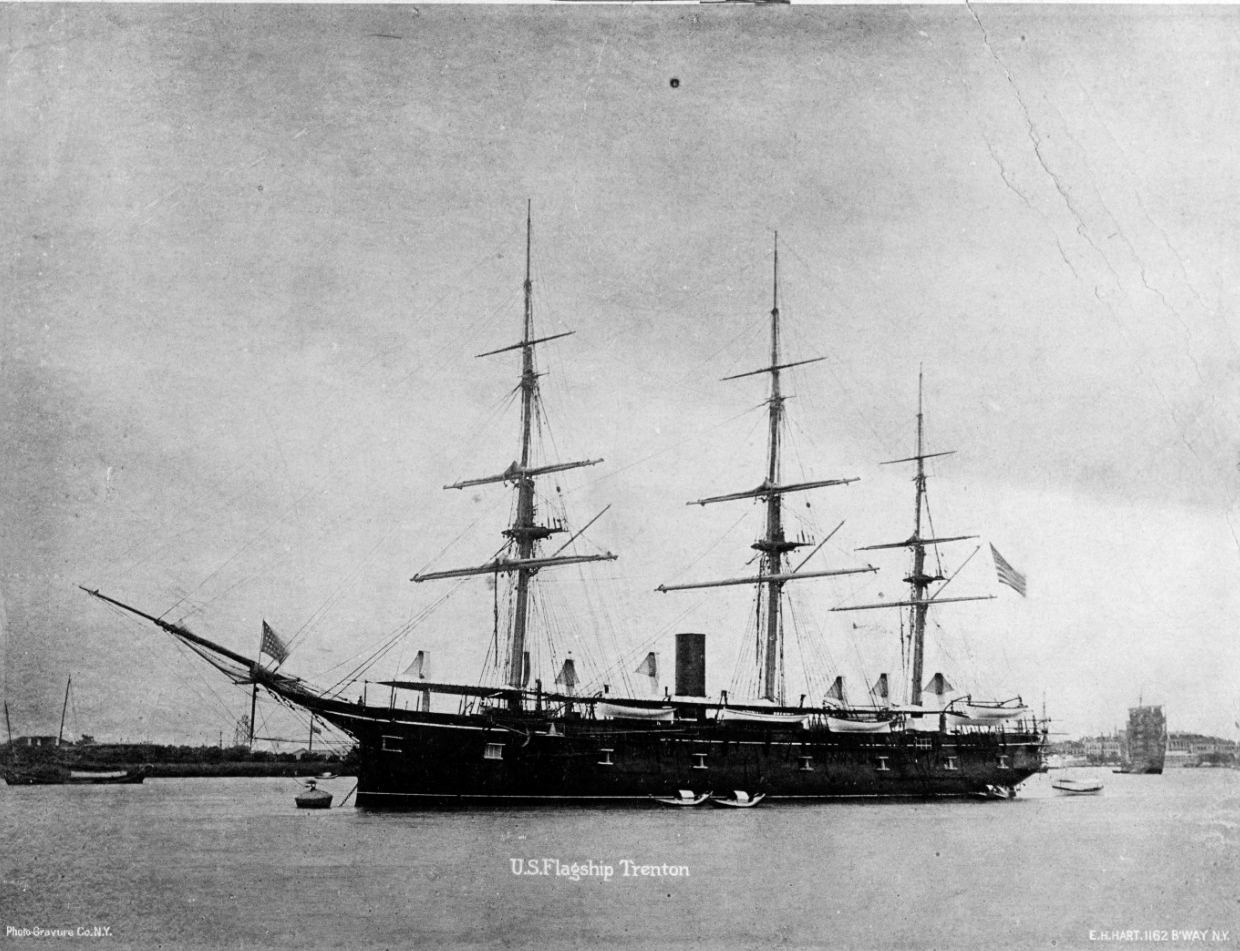 Trenton in a Far Eastern port, circa 1883–1886. The original print is a letterpress reproduction of a photograph, published circa the 1880s by the Photo-Gravure Company, New York. It bears the name of the noted marine photographer E.H. Hart, 1162 Broadway, New York City. U.S. Naval History and Heritage Command photograph. Catalog#: NH 63406.

The first installation of electric lights in a U.S. Navy warship took place during the summer of 1883. Earlier that spring, seven electric power companies were asked by the Bureau of Navigation to submit bids for installing lights in Trenton, then berthed at the New York Navy Yard in Brooklyn. Only one, the Edison Company for Isolated Lighting, submitted a bid of $5,500 to install one L dynamo & one Armington-Sims engine complete to supply light via insulated wiring to 104 16-candle power lamps, 130 10-candle power lamps, and four 32-candle power lamps. The ensuing contract also included 238 key sockets, six extra brushes, one automatic regulator and one dynamo foundation. Lieutenant Commander R. B. Bradford, executive officer of the ship, oversaw the installation of the equipment in Trenton between 7 June and 21 August 1883. Due to the need to maintain the engine and dynamo, the system only ran at night.

Other than minor wiring problems, the initial trial during Trenton's service on the Asiatic Station was a success, and in 1884, the Bureau of Navigation decided to install lights in Atlanta, Boston and Omaha. The installation for these ships were, respectively, the U.S. Electric Lighting Company of New York, the Brush Electric Company of Cleveland, and the Consolidated Electric Light Company of New York.

In 1886, the Bureau of Navigation reported, “[t]his method of lighting ships of war, owing to the small amount of heat given off, the absence of disagreeable odors, and the more perfect illumination, adds much to the health and comfort of the officers and men, tends to make them contented and happy during their long absences from home and friends, promotes discipline and prevents crime.”