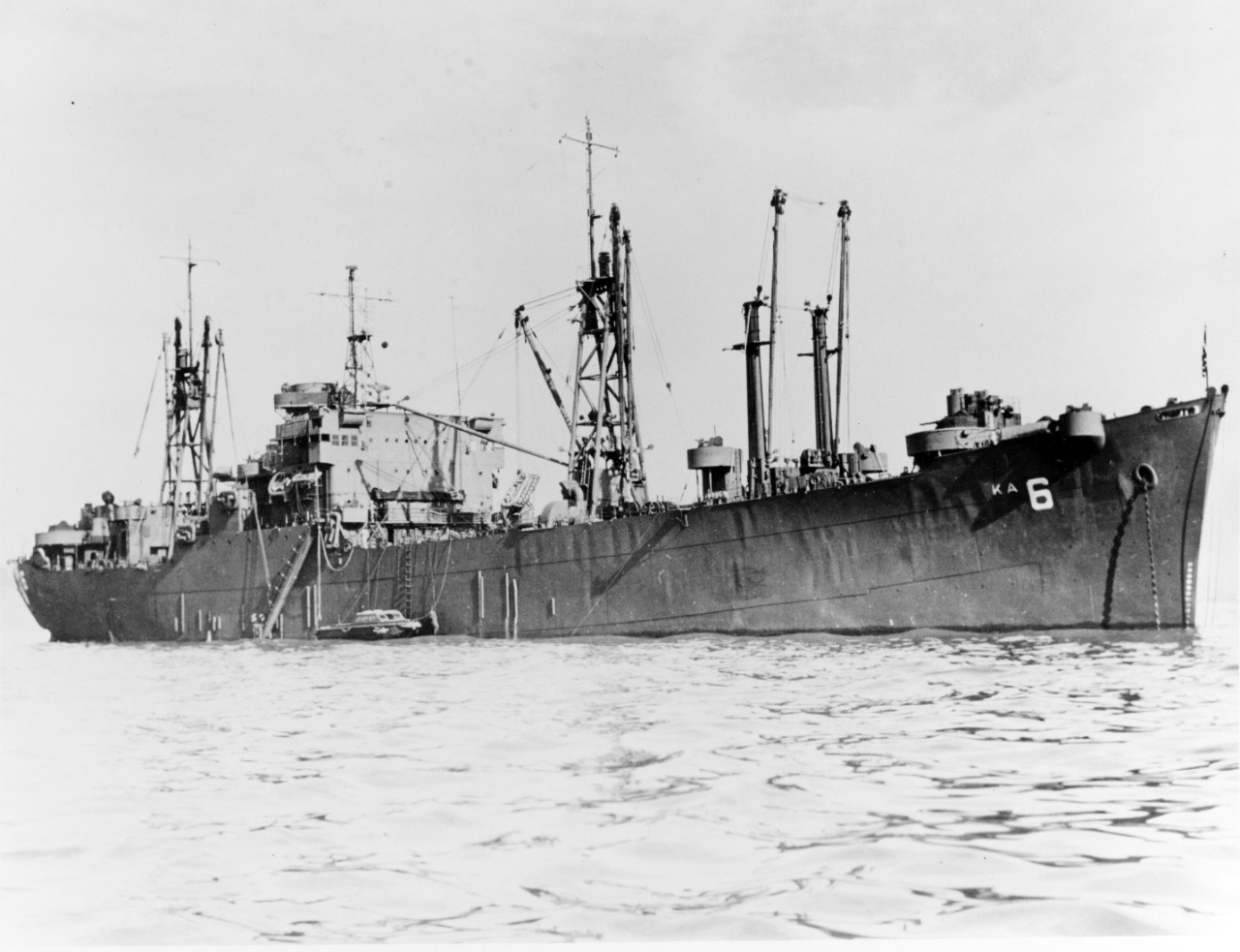 Alchiba was initially commissioned as Monnacdove, and the next day was renamed and designated AK-23. Alchiba was converted by the Boston Navy Yard for naval service as a cargo ship and placed in commission on 15 June 1941, Commander Allen P. Mullinix in command.

The vessel was assigned to Amphibious Force, Pacific Fleet, and became a member of Transport Division 10. On 22 July 1942, she sailed for Koro Island, Fiji Islands, to participate in amphibious landing exercises, the rehearsal for the first American assault landing in the Pacific theater. Upon completing this training, she embarked Marines and filled her holds with ammunition, amphibious tractors, gasoline, and general supplies and got underway for operations in the Solomon Islands. She arrived off Guadalcanal on 7 August, disembarked her troops, unloaded her cargo, and left the Solomons two days later, bound for New Caledonia. After her arrival at Noumea on the 13th, the ship loaded on more cargo and, nine days later, commenced a voyage that took her to Pago Pago, American Samoa; Tongatabu, Tonga Islands; and Espiritu Santo, New Hebrides.

Alchiba returned to Guadalcanal on 18 September. After unloading cargo to support Marines struggling for that island, she sailed back to New Caledonia for more supplies and returned to Guadalcanal on 1 November. She was anchored off Lunga Point at 0616 on 28 November, when two torpedoes from the Japanese submarine I-16 exploded on the vessel’s port side. At that time, her hold was loaded with drums of gasoline and ammunition, and the resulting explosion shot flames 150 feet in the air. The commanding officer ordered the ship to get underway to run her up on the beach. This action undoubtedly saved the ship. Hungry flames raged in the ship for over five days before weary firefighting parties finally brought them under control.

Salvage operations began soon thereafter. Most of her cargo was saved, and temporary repairs were in progress when Alchiba was torpedoed again on 7 December. An enemy submarine’s conning tower had been spotted shortly before two torpedoes were fired. One passed close under the cargo ship’s stern, but the other struck port side near the engine room. The blast killed three men, wounded six others, and caused considerable structural damage. Once the fires and flooding were controlled, salvage operations resumed and enabled the ship to get underway for Tulagi on 27 December 1942. Alchiba remained there through 18 January 1943. On that day, she was moved to Espiritu Santo for further repair work. While at that island, the ship was re-designated AKA-6 on 1 February. She left Espiritu Santo on 6 May, bound for the west coast of the United States, and entered the Mare Island Navy Yard, Vallejo, California, on 2 June.

Her refurbishing there lasted until early August when she conducted sea trials off the California coast before sailing on 13 August for Port Hueneme, California, to take on cargo. Six days later, she headed for the South Pacific to continue her service providing logistics support for Allied fighting men. She made runs to New Caledonia and Guadalcanal and in mid-November, participated in the landings on Bougainville. Alchiba continued her supply duties in the Solomon Islands and New Caledonia through late March 1944.

The end of World War II found Alchiba in port at Ulithi unloading cargo. She remained on duty in the western Pacific through 26 October, when she was ordered back to the United States.

Alchiba arrived at San Francisco on 19 November. Eight days later, she began a voyage to the east coast, transited the Panama Canal on 10 December, and sailed for Norfolk where she arrived on the 18th. Preparations for her deactivation then began. The ship was decommissioned at Portsmouth, Virginia, on 14 January 1946; and her name was struck from the Navy list on 25 February 1946. She was transferred on 19 July 1946 to the Maritime Commission for disposal. She was sold in 1948 and refitted for merchant service.

Alchiba has three battle stars and is the only cargo ship to be awarded a Presidential Unit Citation (for service at Guadalcanal between August−December 1942).

Solomon Islands Campaign: I The Landing in the Solomons 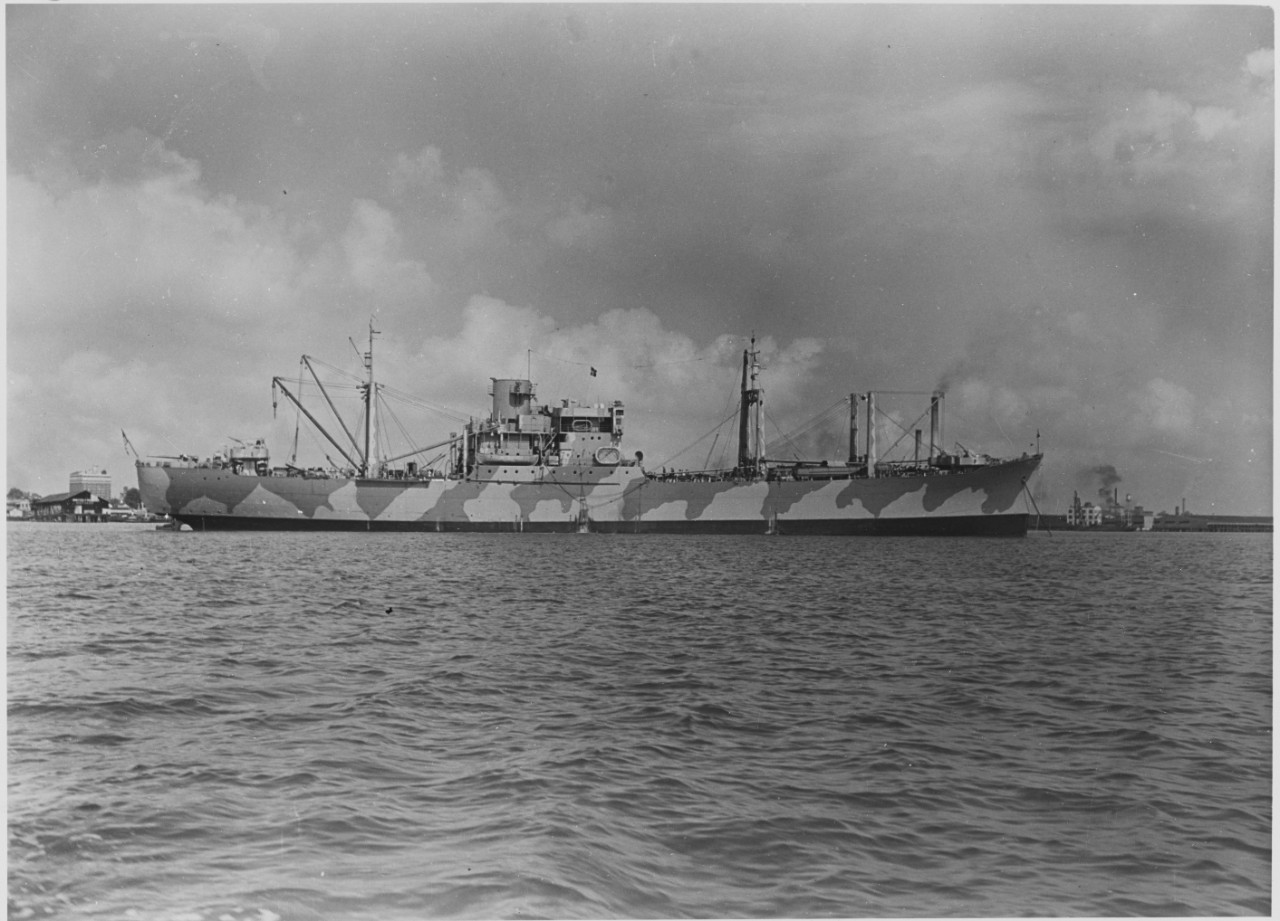 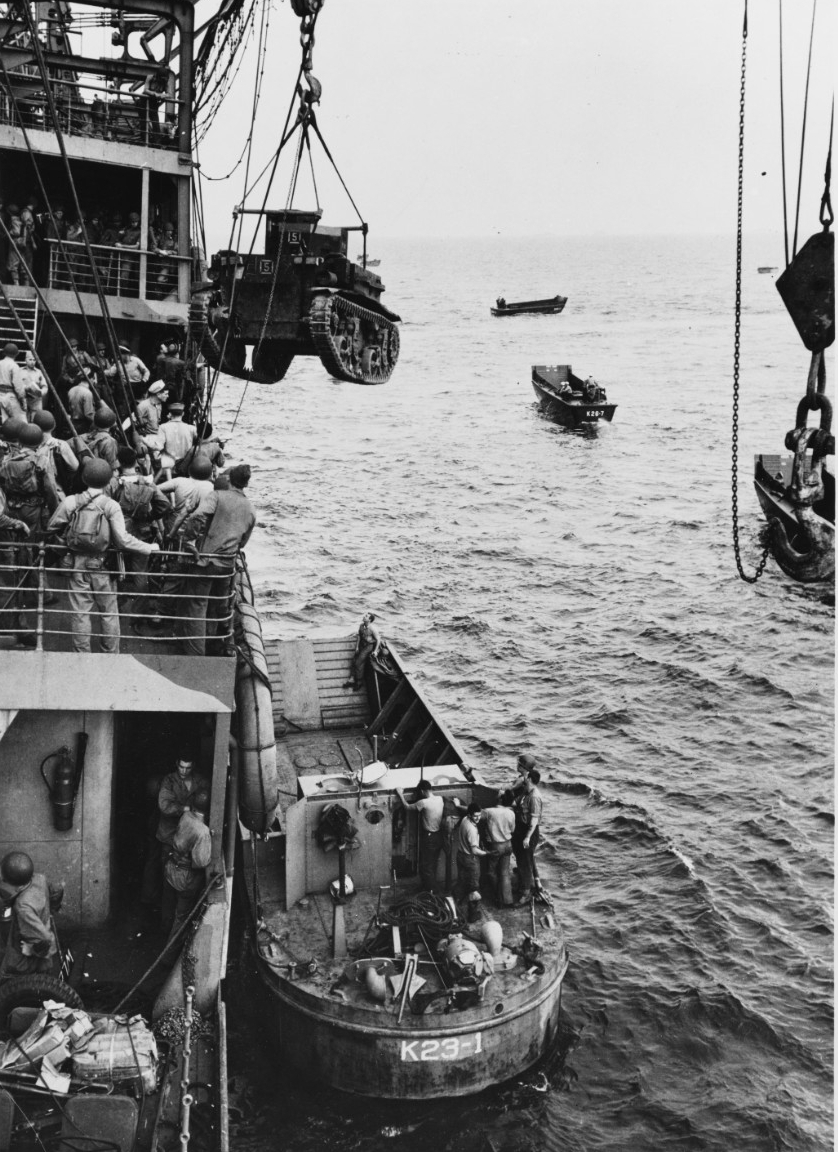 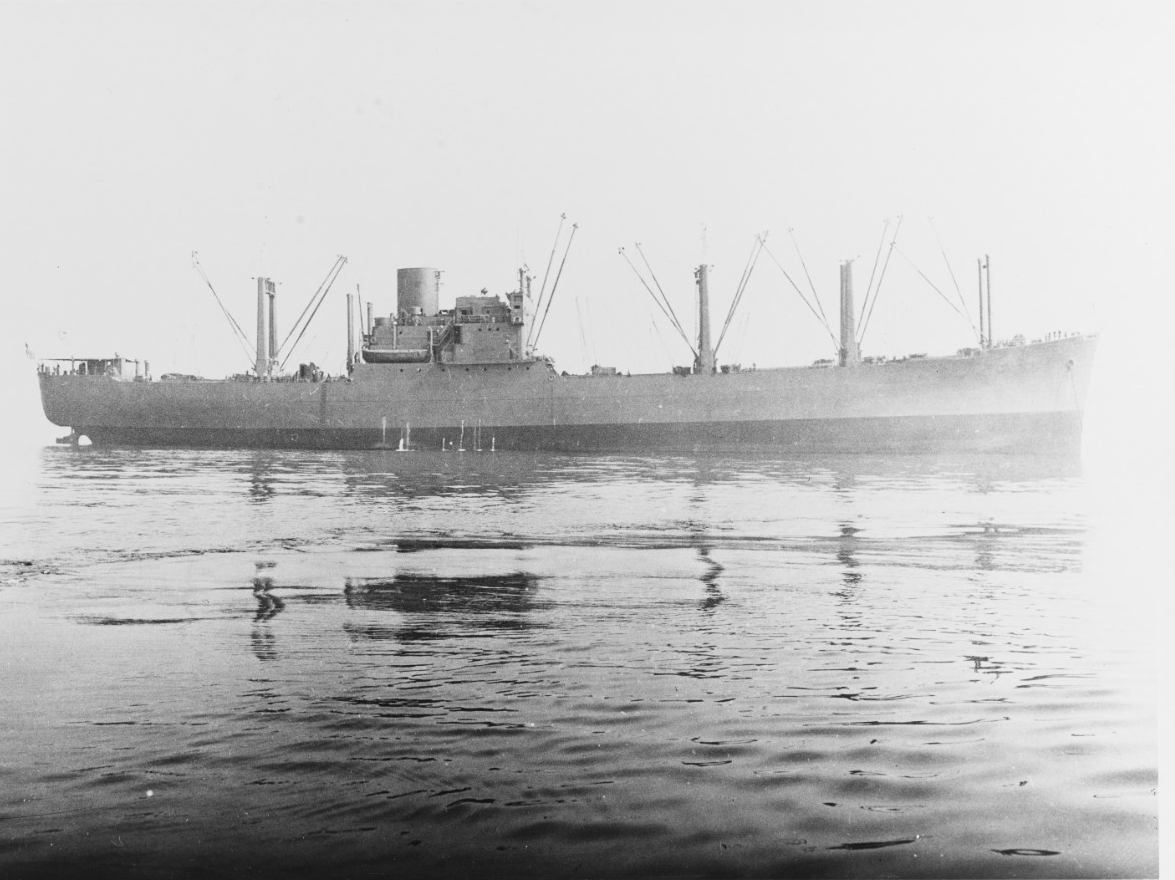 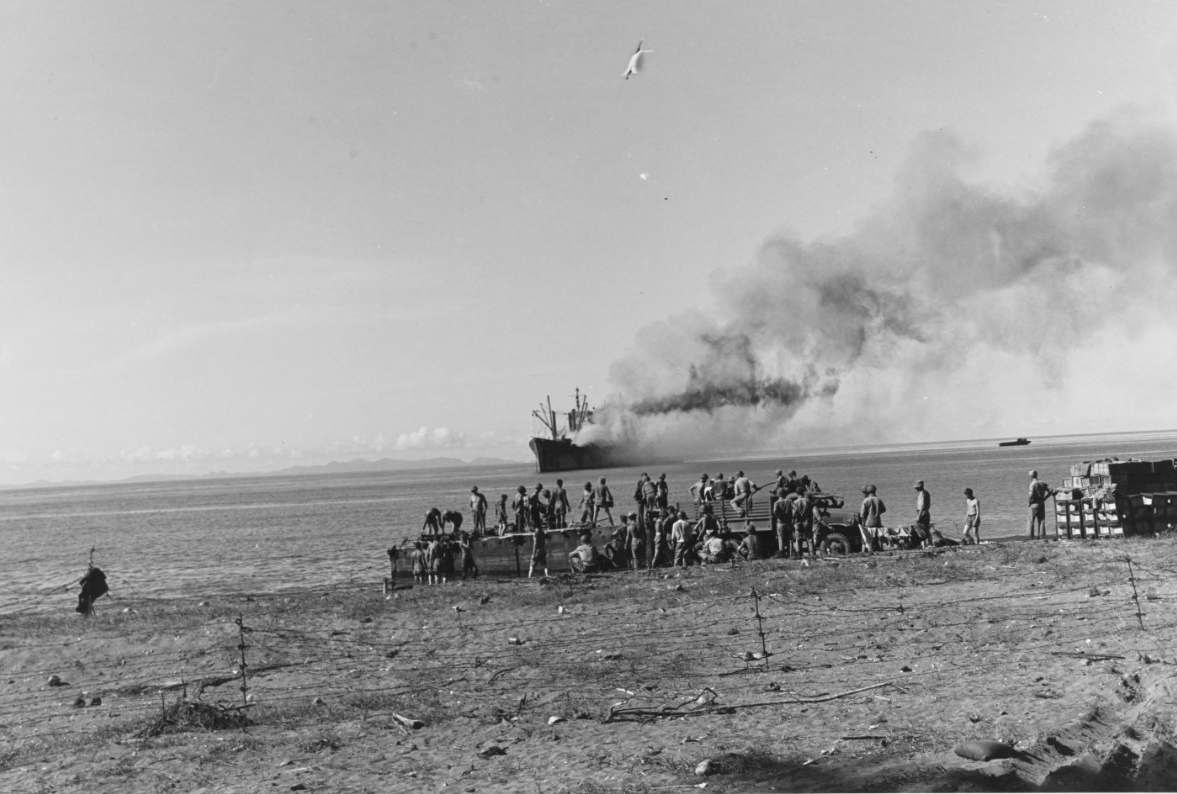 USS Alchiba (AK-23) Aground and afire off Lunga Point, Guadalcanal, circa late November 1942. She had been torpedoed by the Japanese submarine I-16 on 28 November. (USMC 52796)