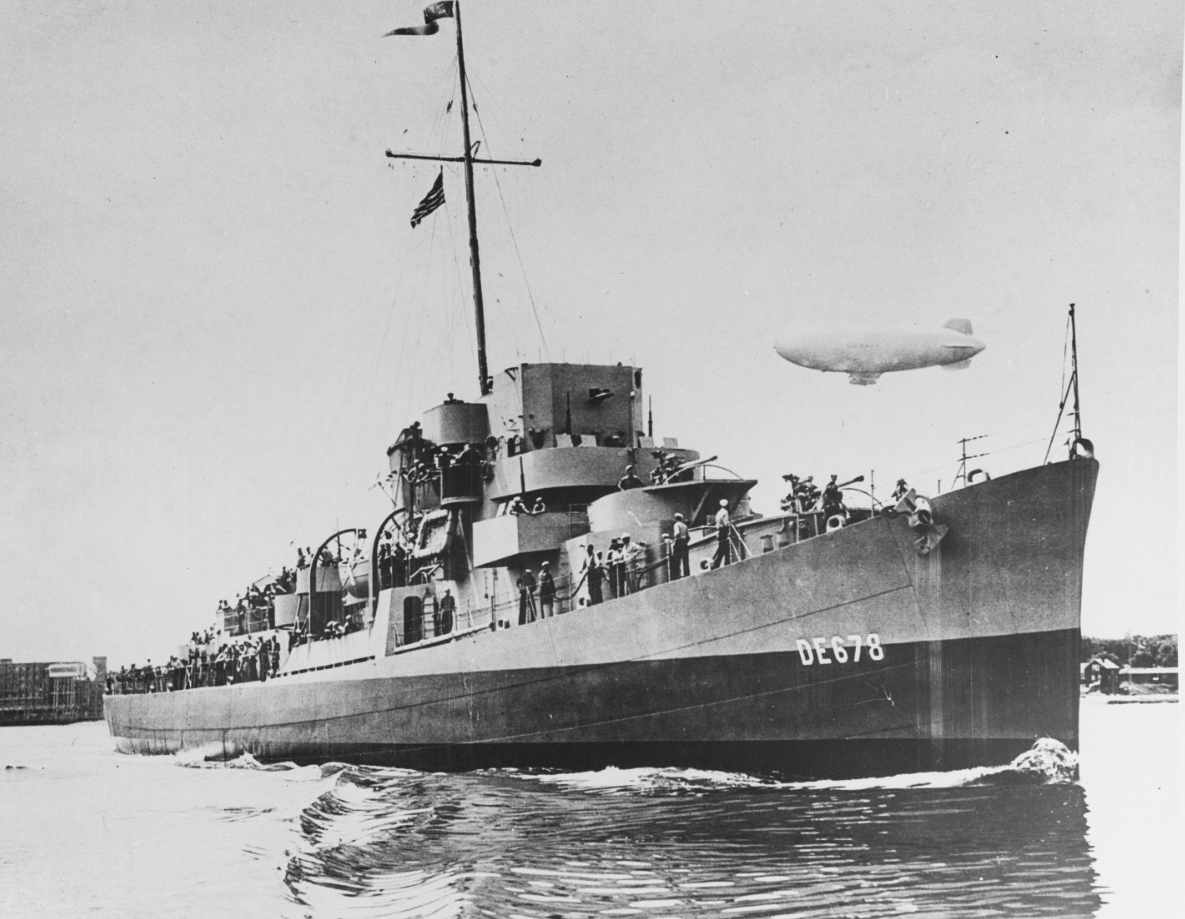 On 12 November 1942, San Francisco was attacked by Japanese planes Guadalcanal when an enemy aircraft crashed into the ship causing “considerable damage and intense fires” that put the after antiaircraft director and radar out of commission. One officer and 15 men were either killed outright or died of their injuries. Four officers, including Commander Mark H. Crouter, the executive officer, and 25 men were wounded, most suffering horrible burns. San Francisco transferred the wounded men to the transport President Jackson (AP-37).

Commander Crouter, though suffering from burn injuries on both legs but knowing another engagement was likely, insisted on staying onboard. MAtt1 Harmon exhibited ‘unusual loyalty on behalf of” Crouter. On 12-13 November 1942, San Francisco fought in a desperate surface engagement at close quarters, during which Crouter was mortally wounded when a projectile exploded in his cabin.

MAtt1c Harmon, meanwhile, was rendering "invaluable service in caring for the wounded and evacuating them to a dressing station" until, a 6-inch projectile exploded near him. Shouting "Look out, Doc," Harmon attempted to shield PhM3c Lynford L. Bondsteel from the lethal fragments, pushing him to the deck. Although Bondsteel managed to get his courageous shipmate below, Harmon died of his wounds soon afterward.

The ship named for MAtt1c Harmon was launched on 25 July 1943 at Bethlehem Steel Company, and was sponsored by his mother, Mrs. Naunita Harmon Carroll. USS Harmon was commissioned on 31 August 1943, with Lieutenant Commander Kendall E. Read in command.

Harmon transited the Panama Canal on 13 November to proceed to the South Pacific area via San Francisco, Pearl Harbor, and Samoa. Arriving on Christmas Day 1943, she reported for duty with Commander, South Pacific Force. For the next eight-and-a-half months, she operated on escort duty throughout the South Pacific theater. On 18 September 1944, she sailed for Pearl Harbor, proceeding via Manus, in the Admiralty Islands, and Majuro, in the Marshalls.

On 24 November 1944, Harmon joined the 7th Fleet as a unit of Admiral Richard L. Conolly's Luzon Reinforcement Group. Harmon sortied from Manus on 2 January 1945 with this large convoy and ultimately arrived in the transport area to the east of Lingayen Gulf on 11 January.

On 5 March 1945, Harmon arrived off Iwo Jima to act as escort and antisubmarine screen. This duty lasted until 27 March 1945, when she proceeded to Pearl Harbor and reported to the 1st Fleet for training. She remained there until August when Harmon was ordered to Mare Island to increase her firepower by replacing her 3-inch guns with 5-inch mounts.

After the war, Harmon departed San Diego on 7 January 1946, bound for the Canal Zone, where she conducted training operations with submarines. Clearing Cristobal on 28 March, Harmon reached New London on 3 April 1946. There she again exercised with submarines until December 1946, before she proceeded to Green Cove Springs, Florida, where she was decommissioned on 25 March 1947 and joined the Atlantic Reserve Fleet.

Stricken from the Naval Vessel Register on 1 August 1965, the first U.S. Navy ship to be named for an African-American naval hero was sold to the North American Smelting Co., of Wilmington, Del., on 30 January 1967. 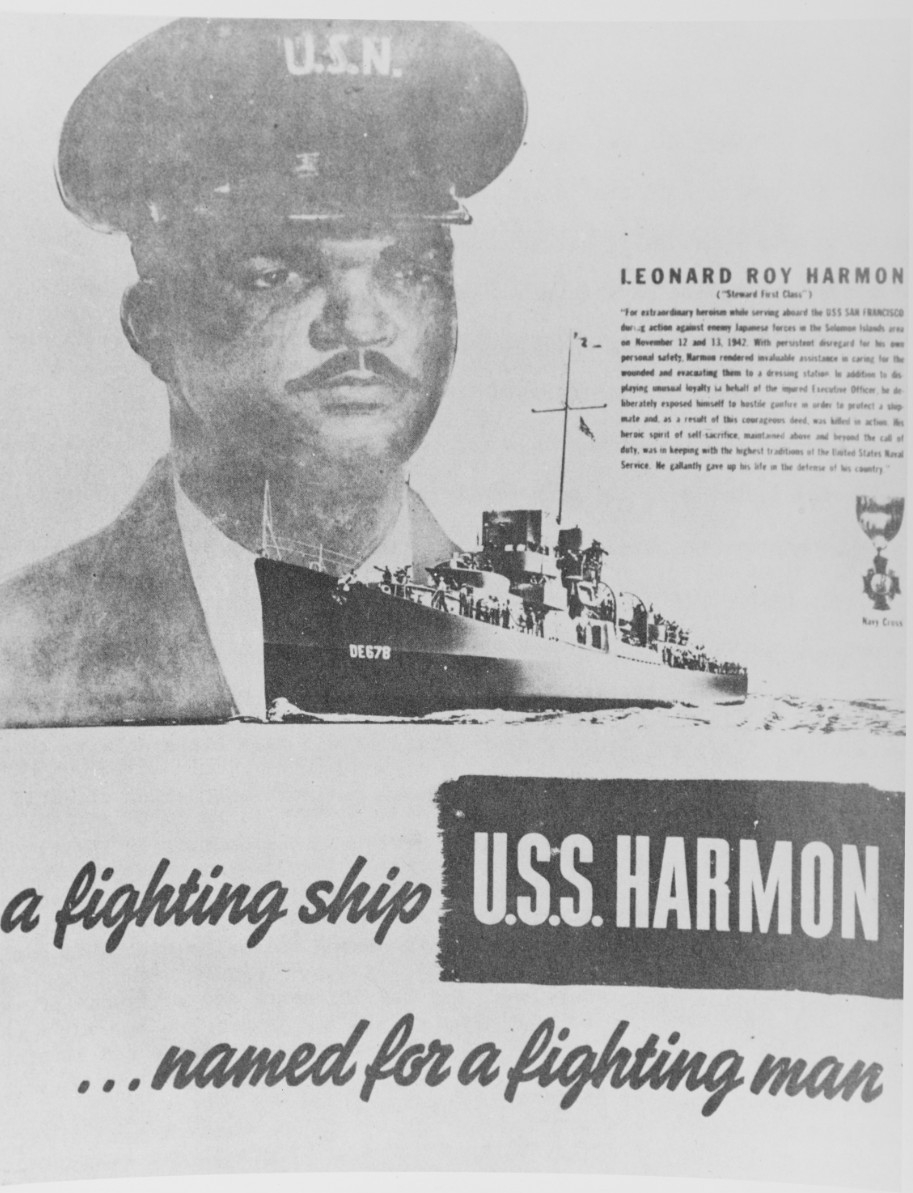 Poster featuring Mess Attendant Harmon and USS Harmon (DE-678), which was named in his honor. (NH69652) 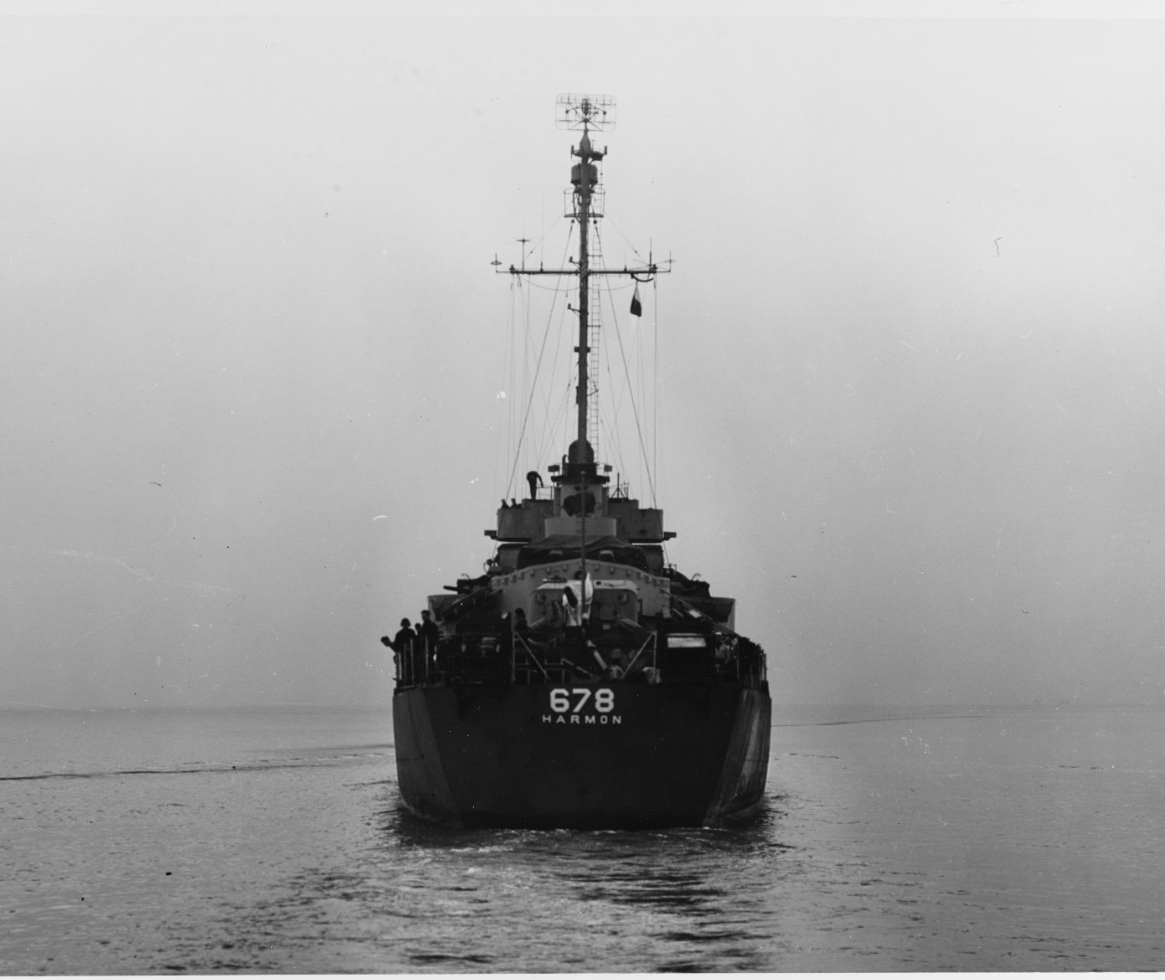 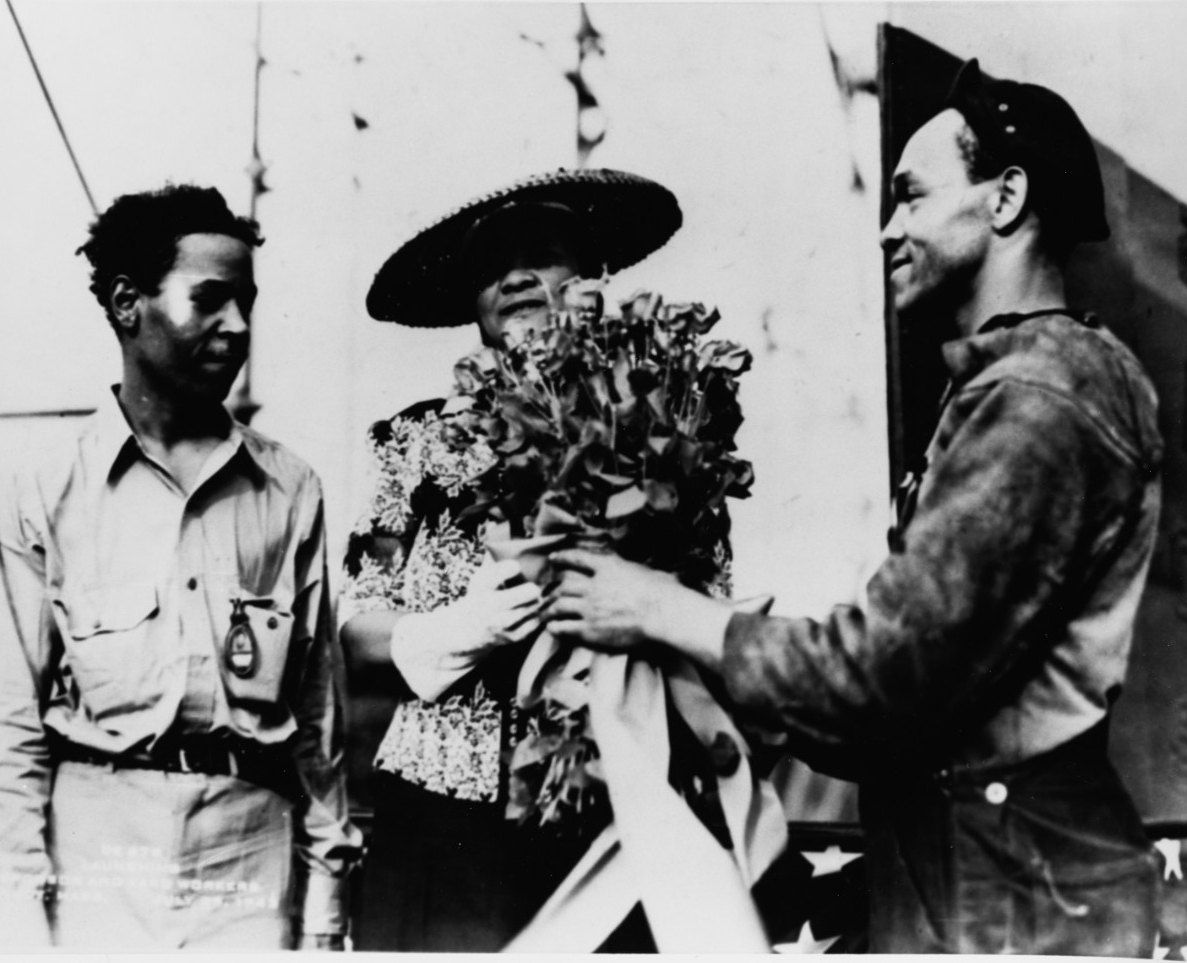 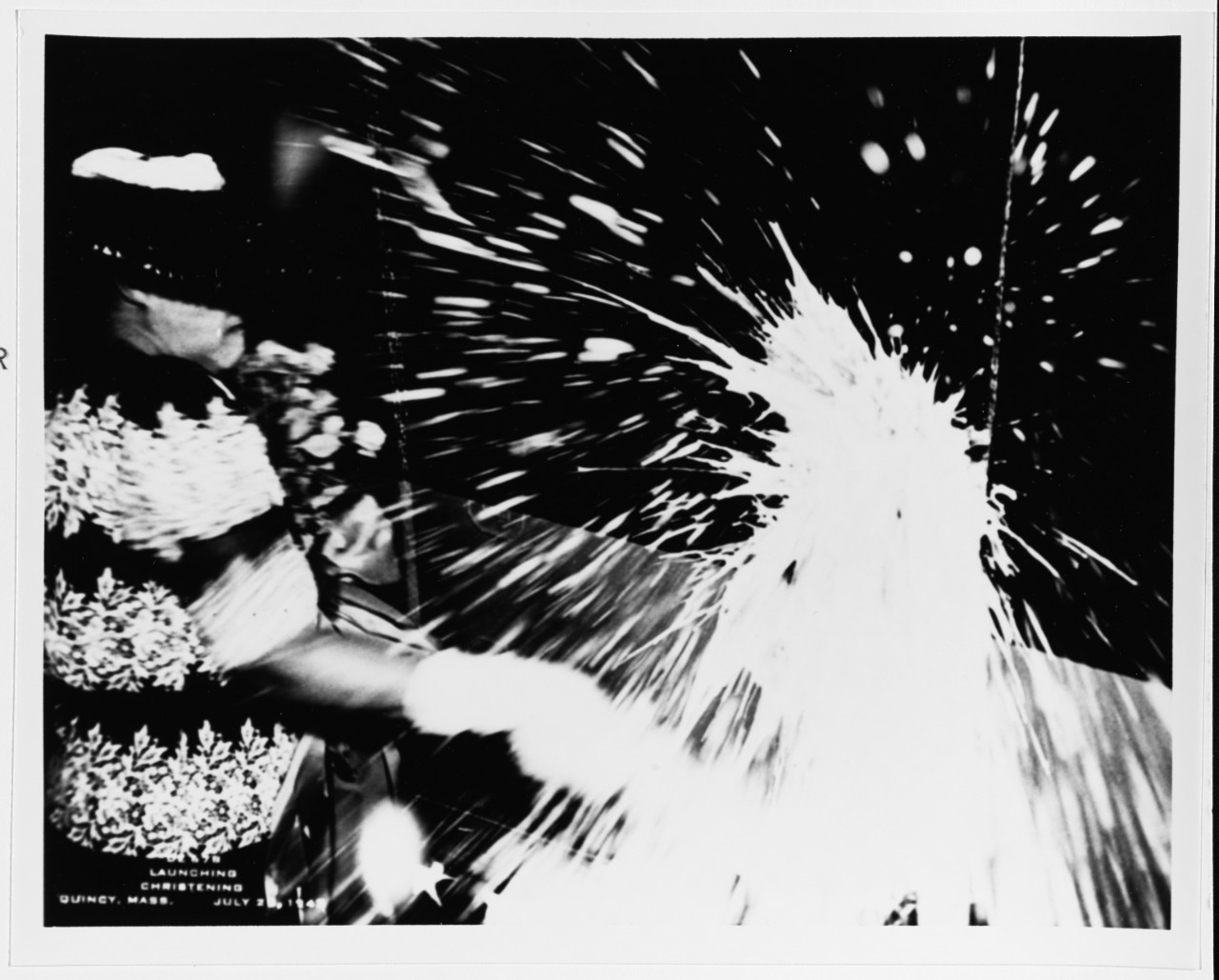 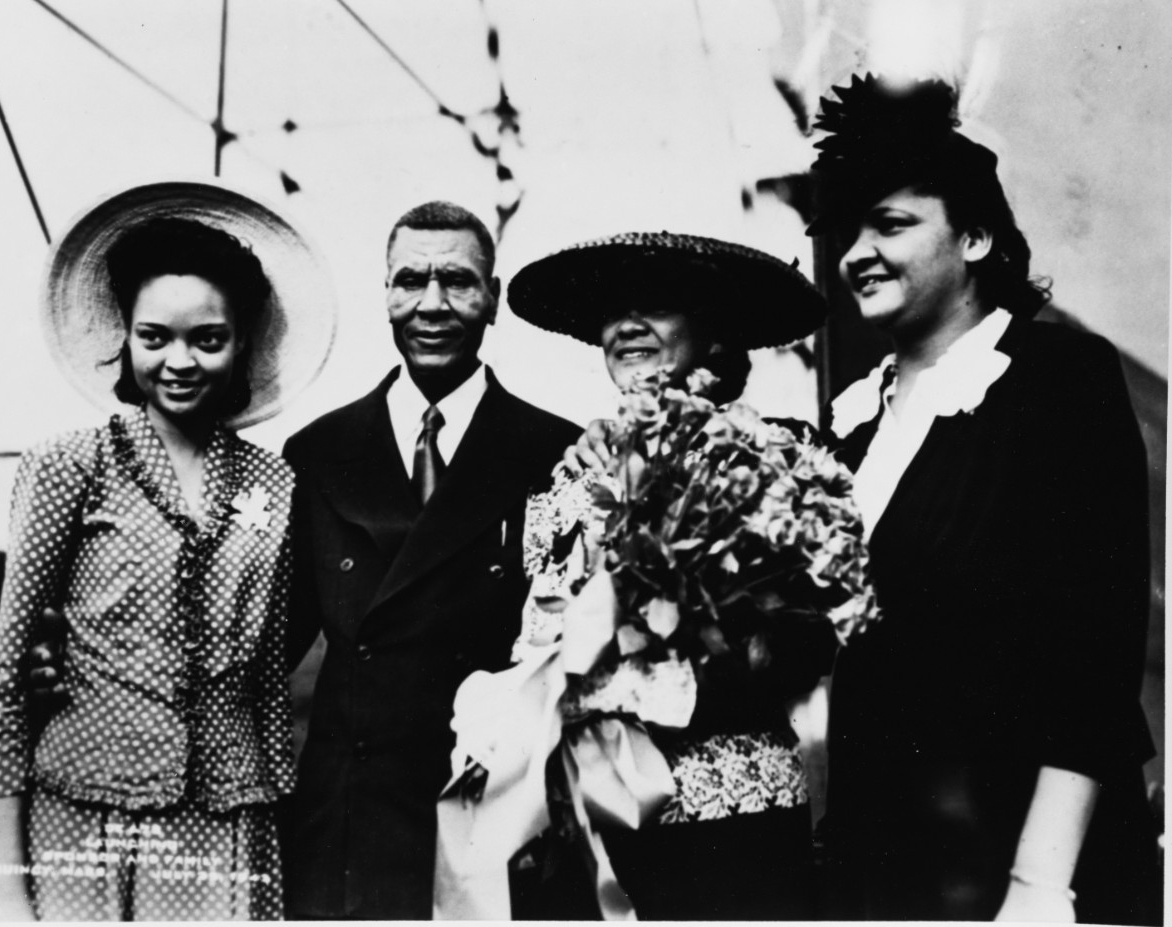 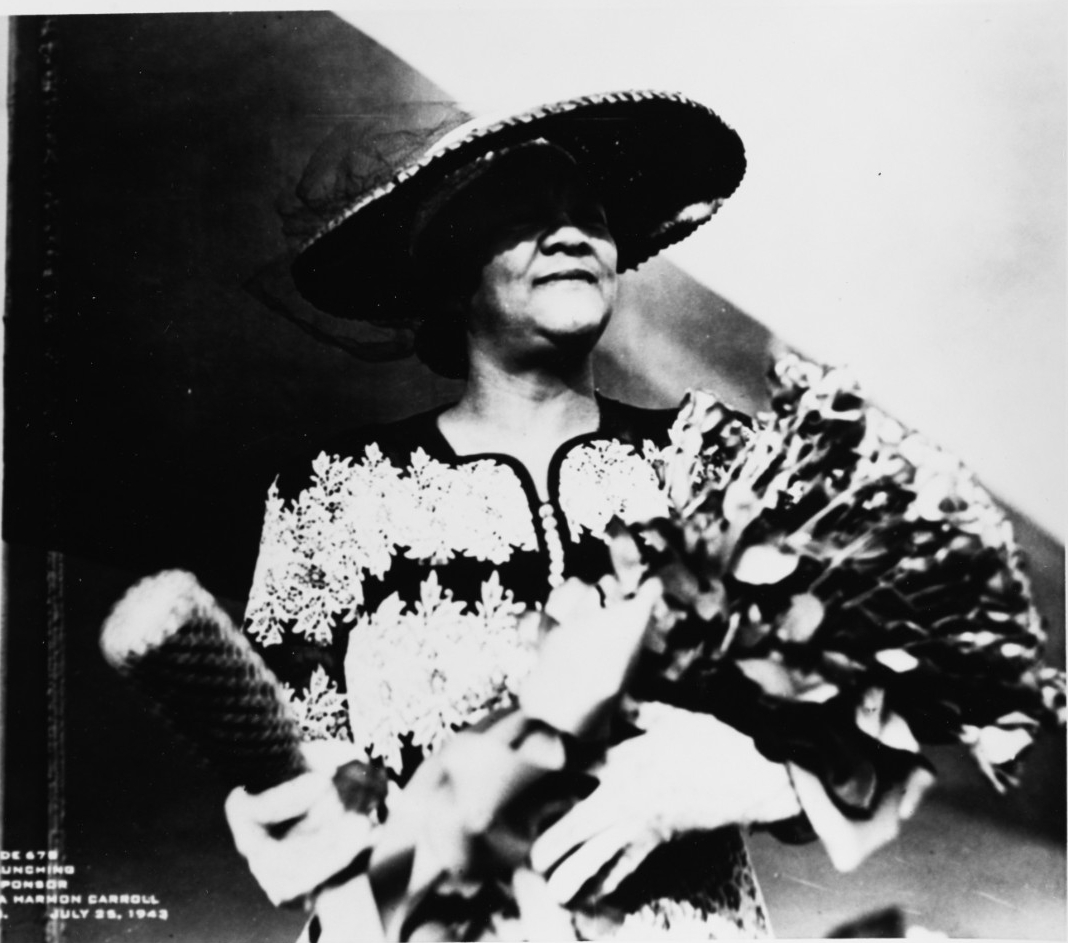