Contributions of Native Americans to the U.S. Navy

Serving the Nation Since Its Birth

Since 1776, when General George Washington began enlisting Native Americans for his Army, Navy, and Marines, Native Americans have contributed significantly to the defense of our nation. During the Civil War, 20,000 Native Americans served with Union forces both at sea and on the land. During World War I, although ineligible for the draft, 15,000 Native Americans volunteered to fight in the Great War. Although Native Americans have been an integral part of our country long before its birth, Native American veterans weren’t awarded citizenship and voting rights until 1919. In 1924, voting rights were extended to all Native Americans after the Snyder Act was passed. In World War II, 44,000 fought with distinction, including 1,910 in the Navy and 874 in the Marines. For the Navy, two Oklahoma Cherokees distinguished themselves. Rear Admiral Joseph J. “Jocko” Clark commanded aircraft carriers and later a task force. Commander Ernest E. Evans was posthumously awarded the Medal of Honor for his actions during the Battle off Samar, Philippines.

Between 10,000 and 15,000 Native Americans fought in the Korean War and more than 42,000 during Vietnam. In 1966, South Carolina Cherokee Boatswain’s Mate 1st Class James E. Williams, while serving at South Vietnam’s Mekong Delta, killed an unknown number of enemy forces while destroying 65 vessels and disrupting an enemy logistic operation. Williams was awarded the Medal of Honor for his actions during the three-hour battle against Viet Cong guerrillas with the two riverine patrol boats he commanded.

In the early 1970s, Chief of Naval Operations Admiral Elmo Zumwalt sought to reduce racism and sexism in both the Navy and Marine Corps with Z-Gram #66 (Equal Opportunity) which benefited Native Americans immensely. Rear Admiral Michael L. Holmes and Commander John B. Herrington are notable examples of the new opportunities for Native Americans as a result of Zumwalt’s Z-Gram. Holmes served 32 years as a naval aviator, and Herrington flew for the Navy and later NASA, becoming the first enrolled member of an Native American tribe to fly in space. 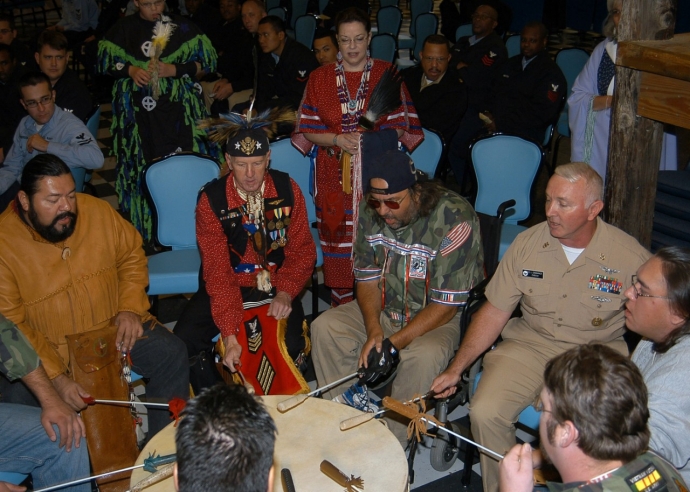