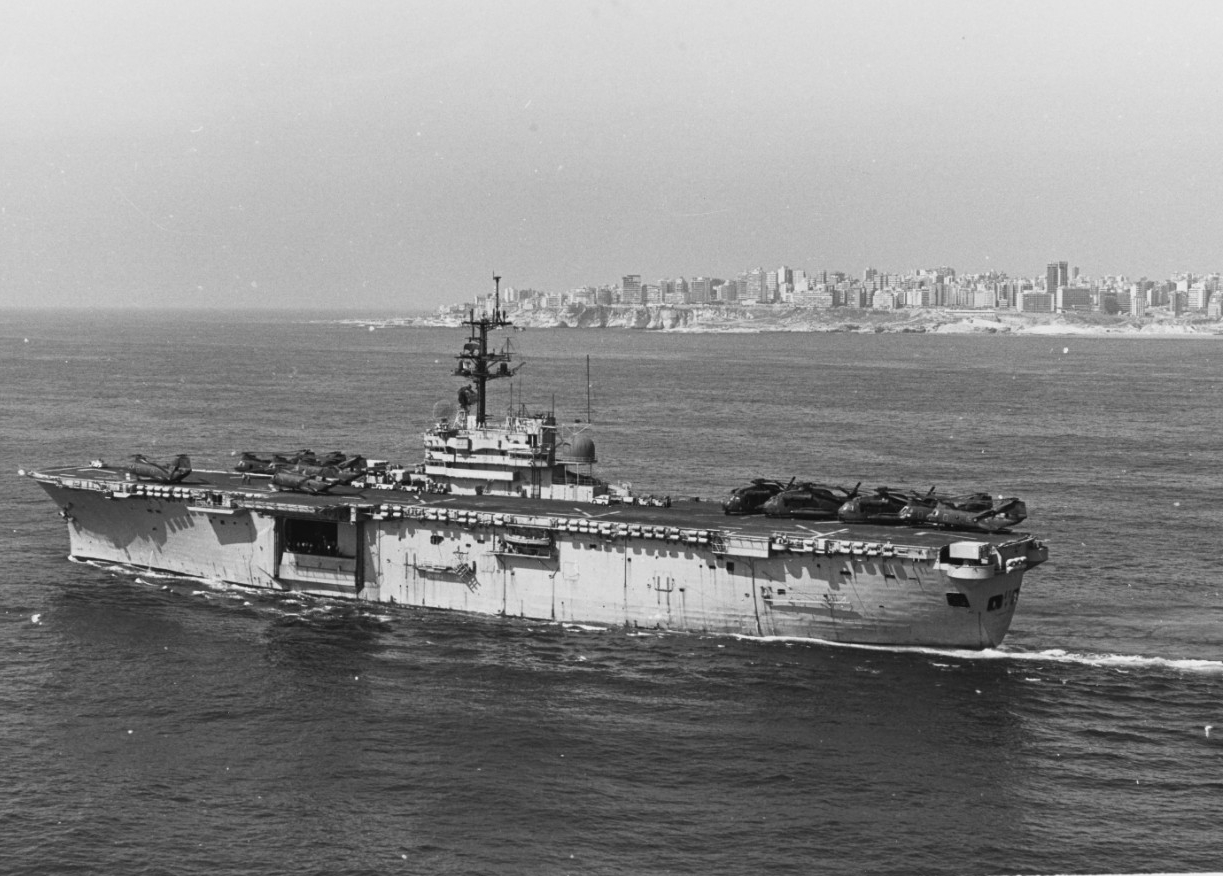 In August 1982, the governments of the United States, France, Italy, and Great Britain deployed a multinational peacekeeping force to Lebanon in an effort to stabilize the country and stop the fighting between Syria, the Palestine Liberation Organization (PLO), and Israel. The contingency—including the first 800 U.S. Marines from the 32nd Marine Amphibious Unit (MAU)—agreed to oversee the PLO’s evacuation and by 10 September through high-level diplomacy, the PLO left the port of Beirut. The Marines departed as well considering the mission complete. Just four days later, the president-elect of Lebanon, Bashir Gemayel, was assassinated. In response, elements of Lebanese forces avenged his death by massacring more than 1,000 unarmed Palestinians. Lebanon was once again in chaos. The multinational force was ordered back to Beirut, and by 29 September, elements of 32nd MAU had landed for a second time.

Initially, the multinational force’s mission was to establish a presence in Beirut providing the stability necessary for the Lebanese government to regain control of the capital city and train the Lebanese armed forces to become strong enough to protect itself. Although the Marines were deemed “peacekeepers,” their presence was anything but peaceful. Hampered by a multitude of unexploded ordnance, sniper fire, and terrorist’s attacks, the presence of the Marines in Beirut turned to tragedy when on the morning of 23 October 1983 two truck bombs struck separate buildings housing U.S. Marines and French forces killing nearly 300 American and French servicemembers. It was the single deadliest day in U.S. Marine Corps history since World War II’s Iwo Jima battles.

On 3 December, an F-14 reconnaissance flight from John F. Kennedy was fired on from Syrian-controlled territory. The following day, a strike force of 28 aircraft was launched from Independence and John F. Kennedy into the Bekaa Valley. During the engagement, two A-6 attack planes were shot down from intense ground fire. Lieutenant Mark Lange, pilot, was killed and Lieutenant Robert Goodman, bombardier-navigator, was taken prisoner. After the attack was complete, photos revealed the strike was a success. In the days following, reconnaissance flights were conducted without incident.

In the first two months of 1984, the situation in the country had severely deteriorated. The Lebanese army was plagued by defections and desertions, and consistent heavy fighting had further reduced its capabilities. By 7 February, Beirut had been lost to Muslim and non-Muslim militia. At this point, the Marine presence could no longer contribute to the hoped-for national reconciliation; so on that day, President Ronald Reagan ordered the Marines to withdrawal to Sixth Fleet ships offshore. By 23 February, the Marines began movement to rejoin their supporting ships ending 17 months of continuous operations in the country. 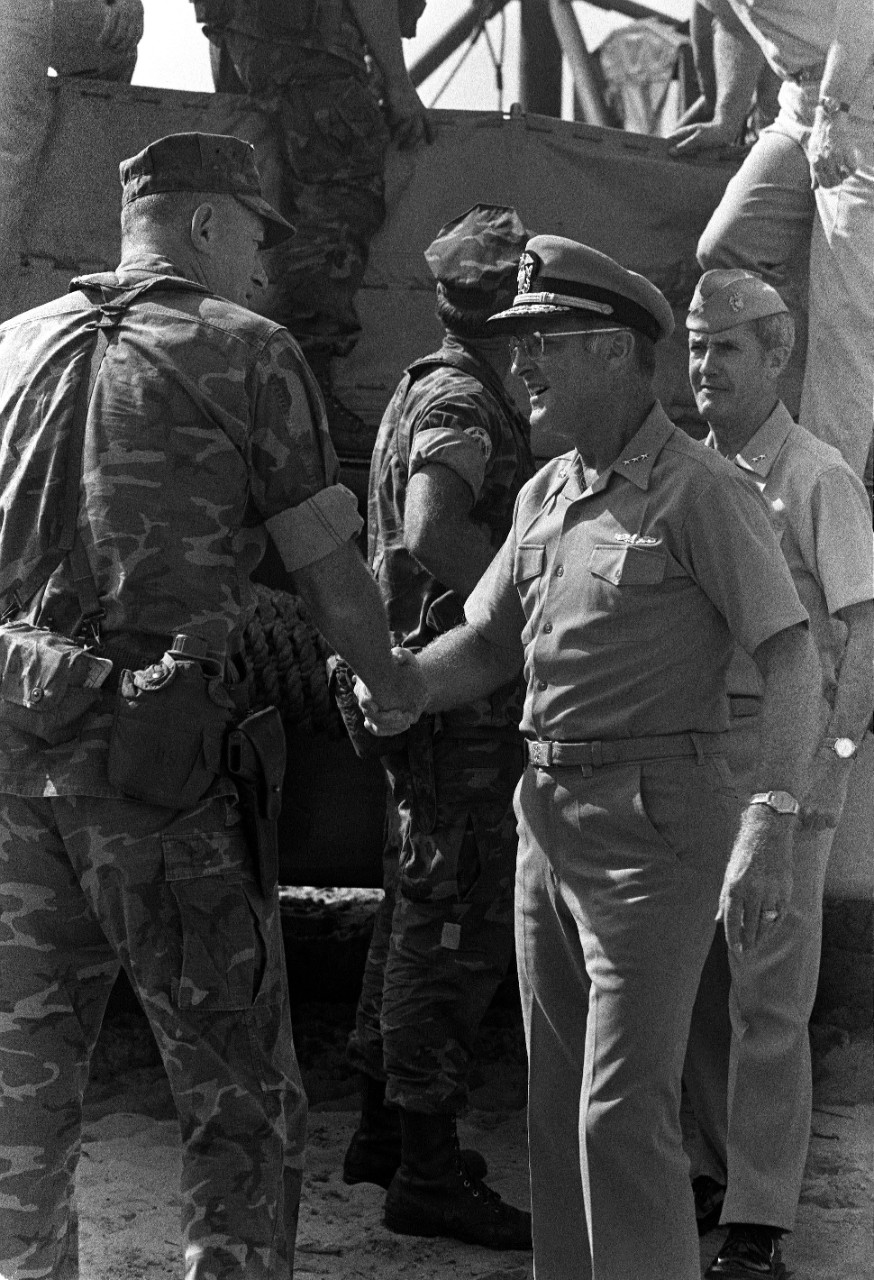 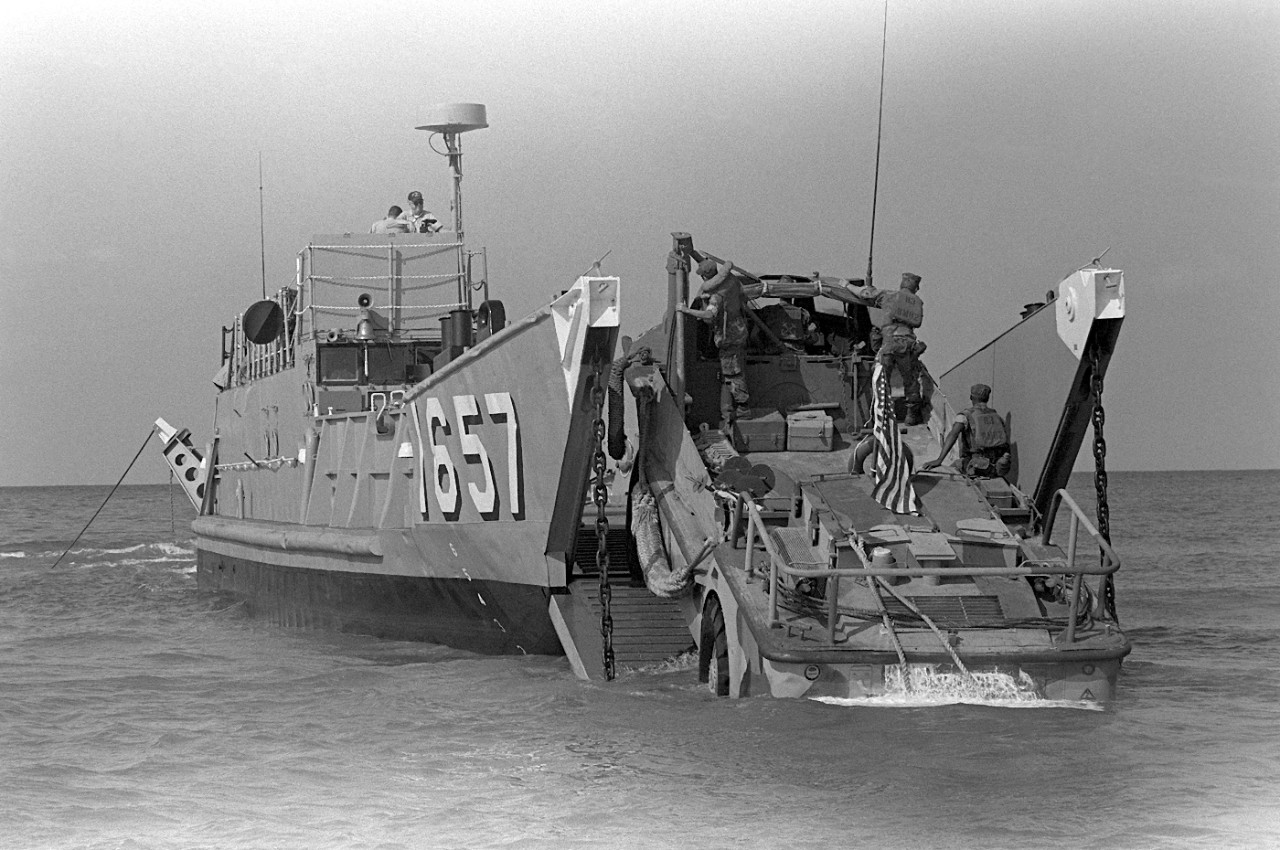 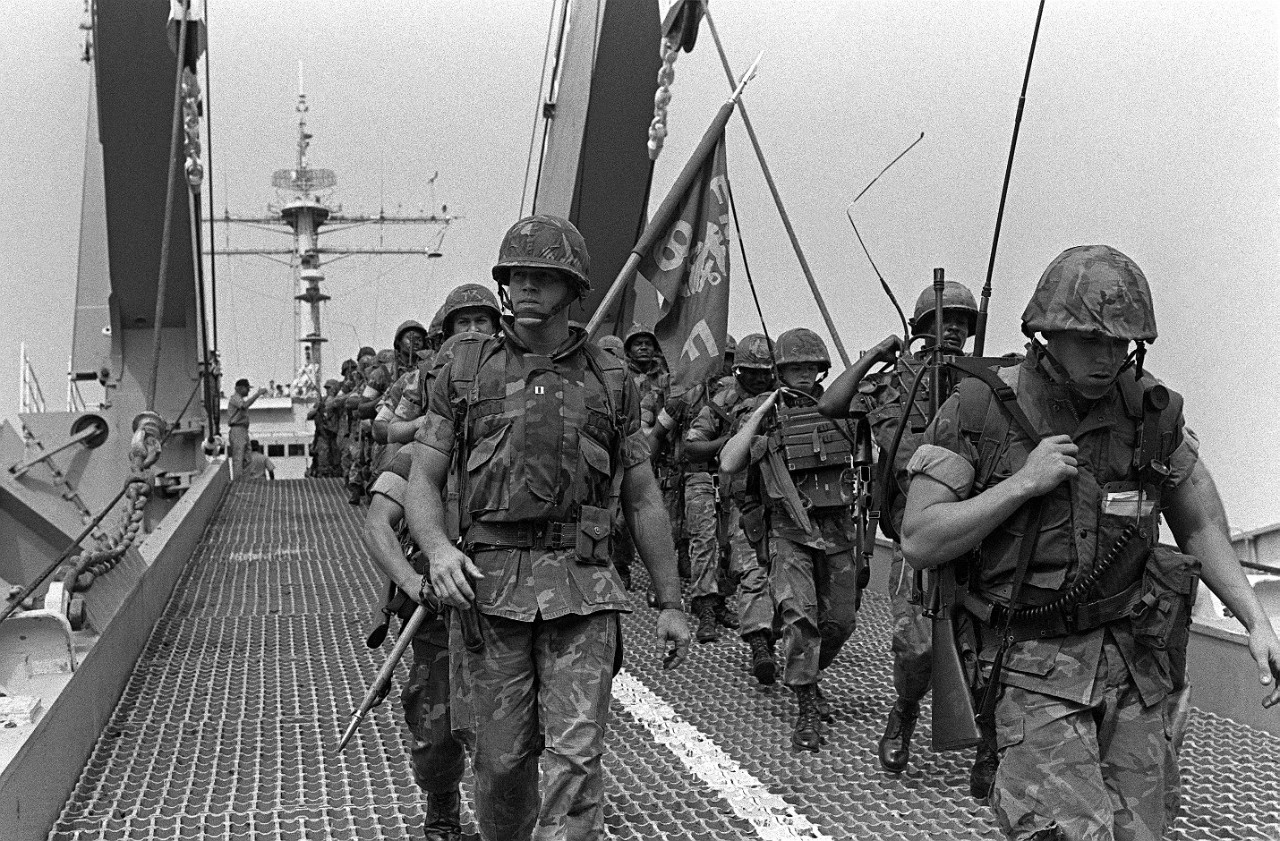 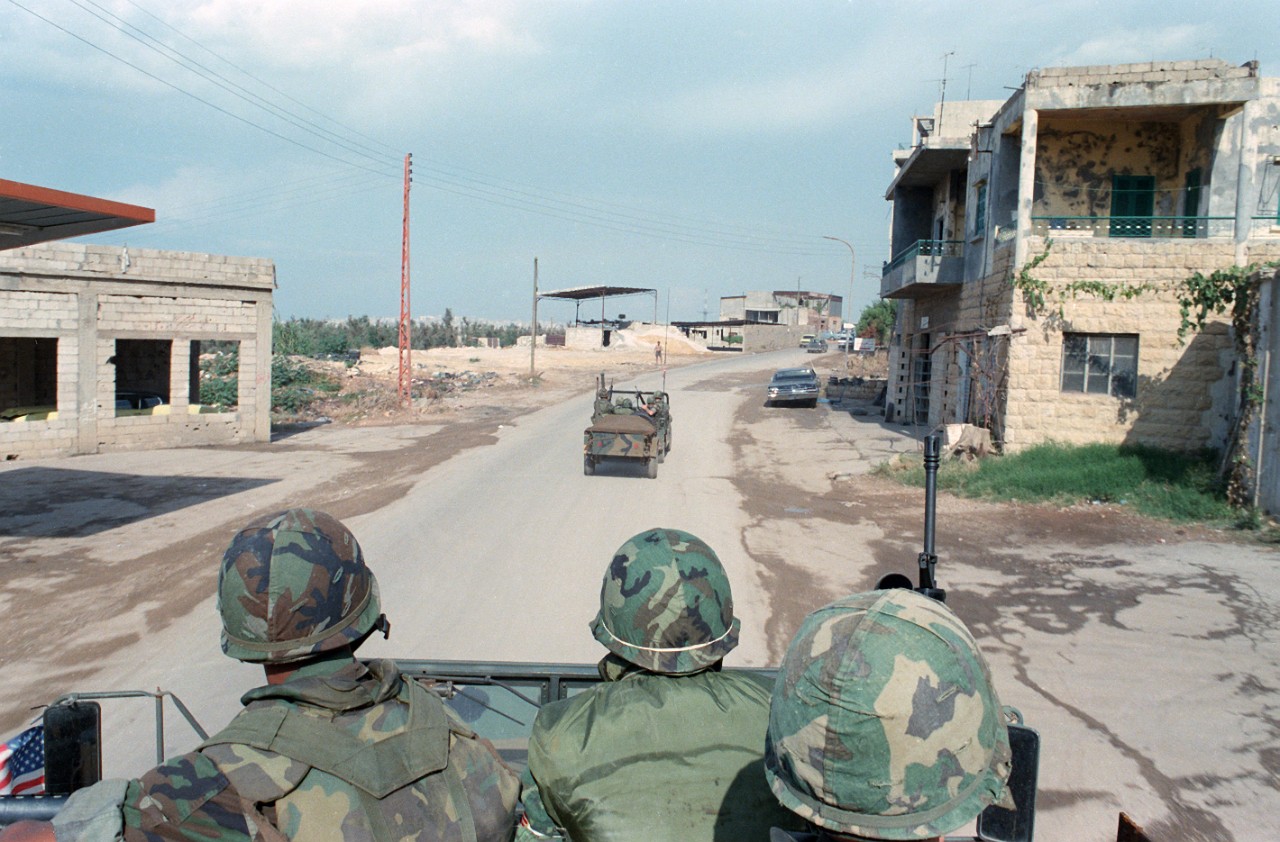 U.S. Marines patrol the streets of Beirut, Lebanon in a truck. The Marines were deployed to Lebanon as part of a multi-national peacekeeping force following confrontation between Israeli forces and the Palestine Liberation Organization. (National Archives identifier: 6415893) 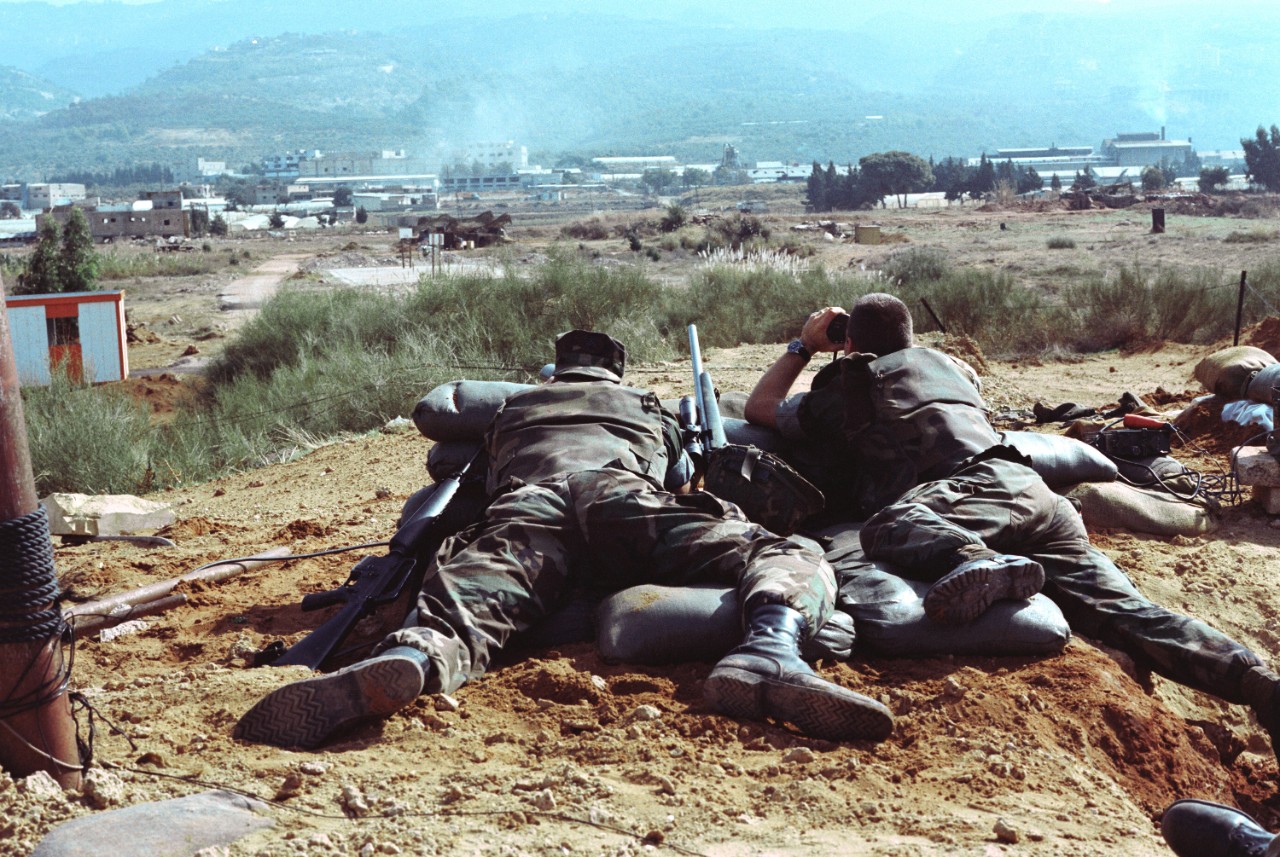 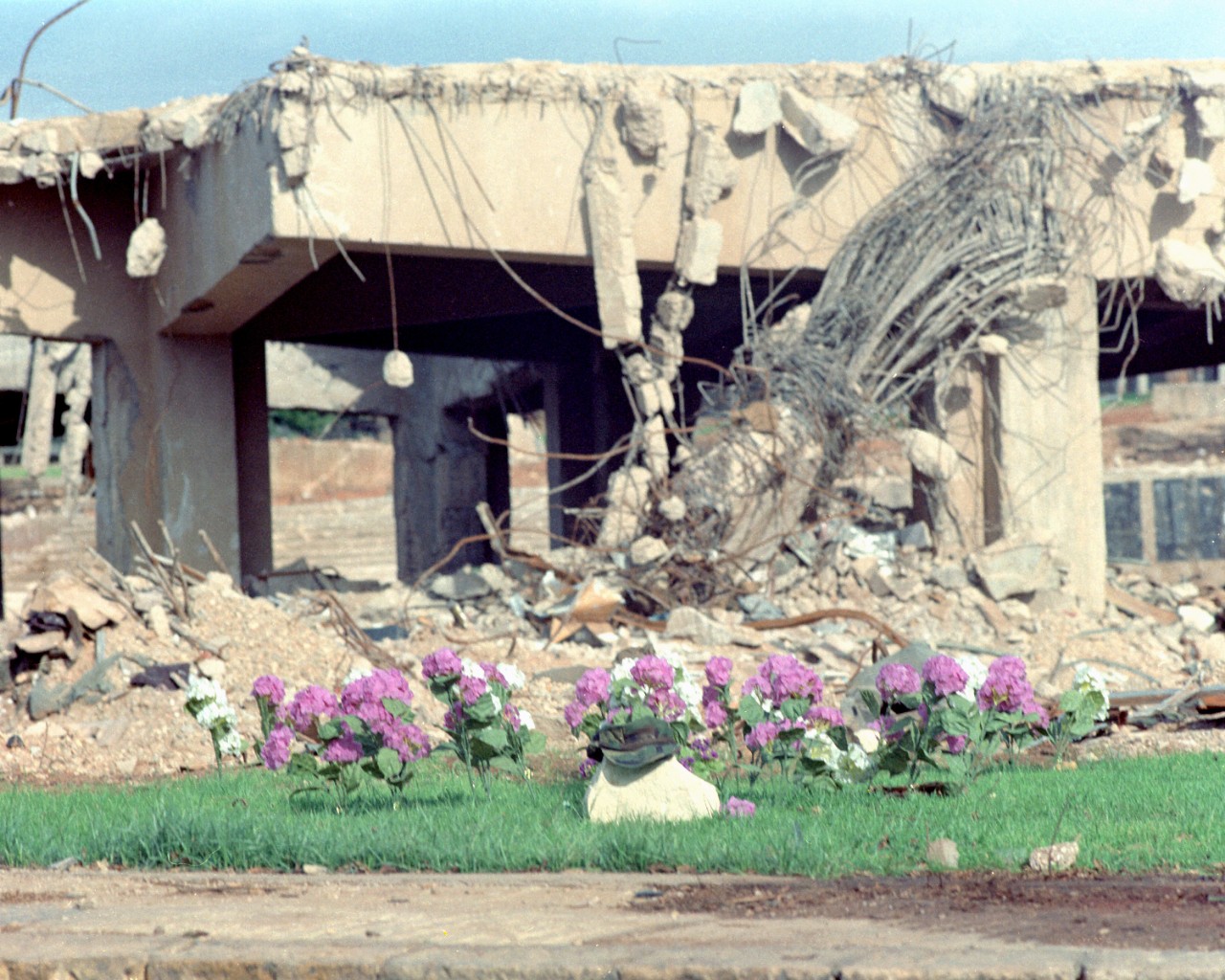 The bombed remains of the U.S. Marine barracks at Beirut International Airport stood as a reminder of the terrorist attack in which 241 Marines lost their lives. The Marines deployed to Lebanon as part of a multi-national peacekeeping force following confrontation between Israeli forces and the Palestine Liberation Organization. (National Archives identifier: 6415852) 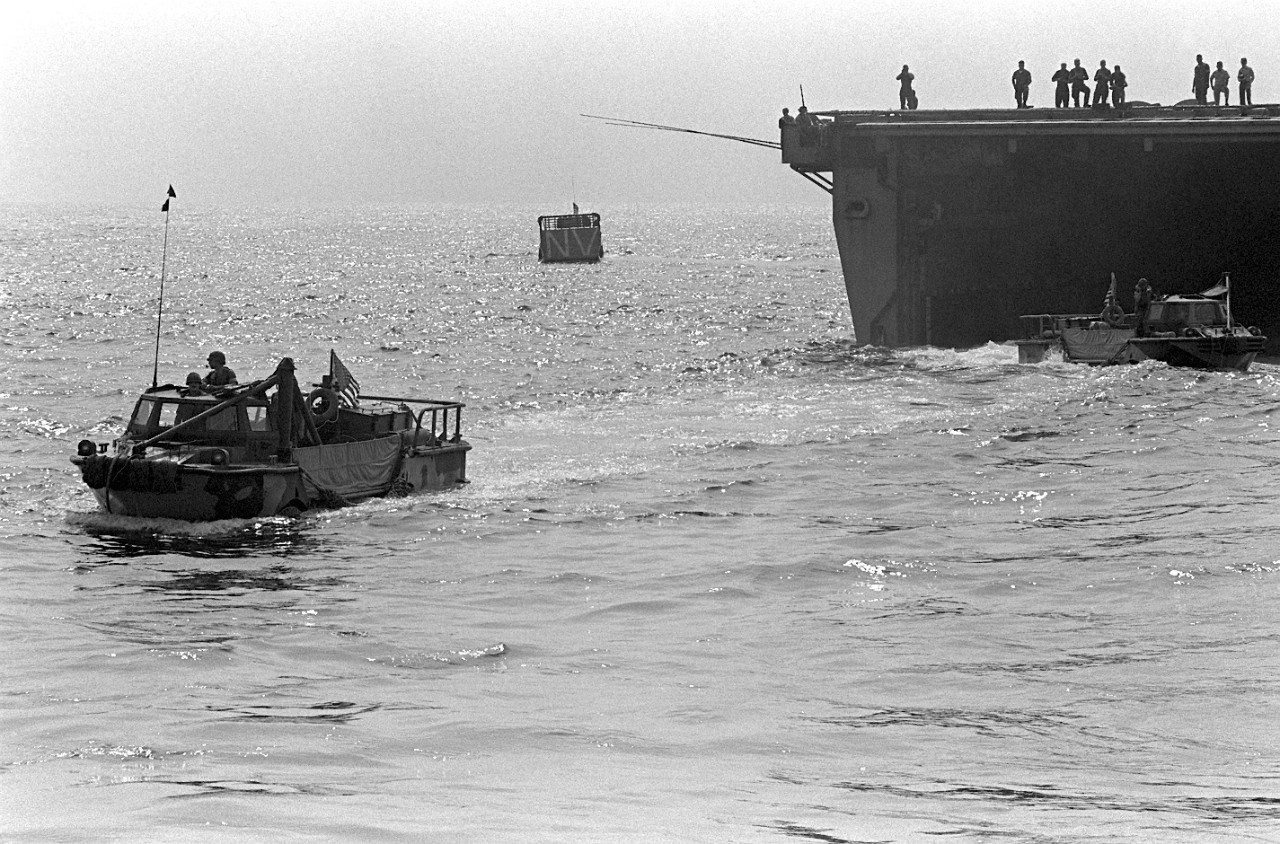 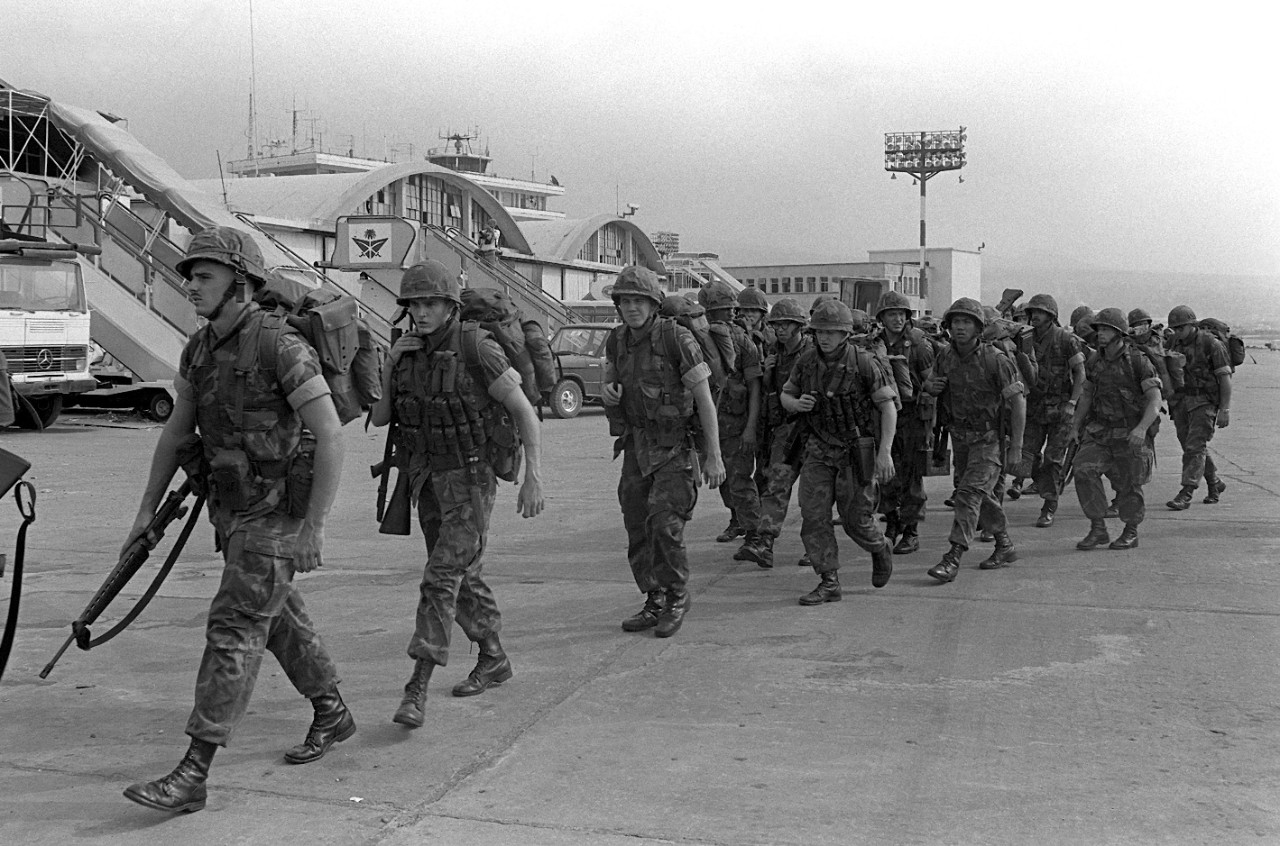 U.S. Marines marched across the runway apron of Beirut International Airport in Lebanon upon their arrival. (National Archives identifier: 6370471) 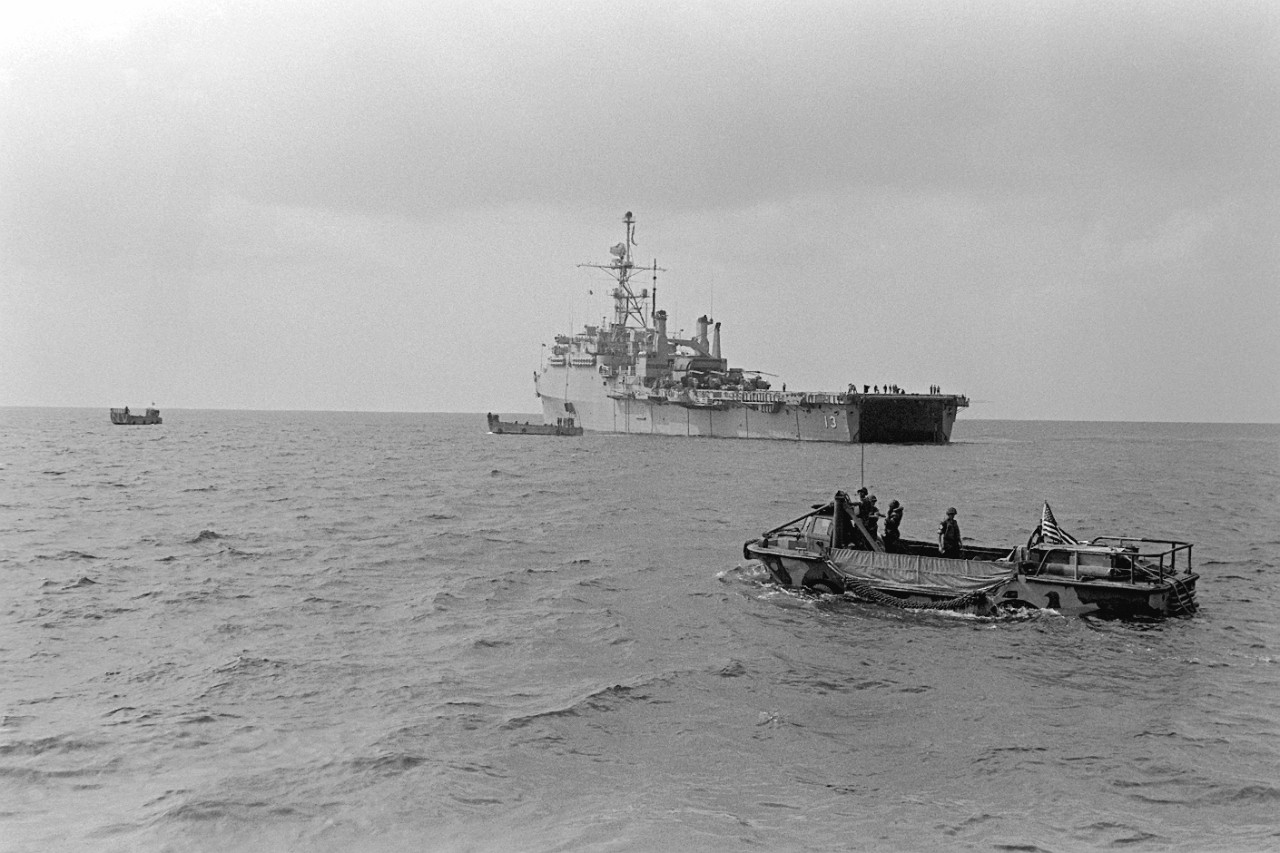 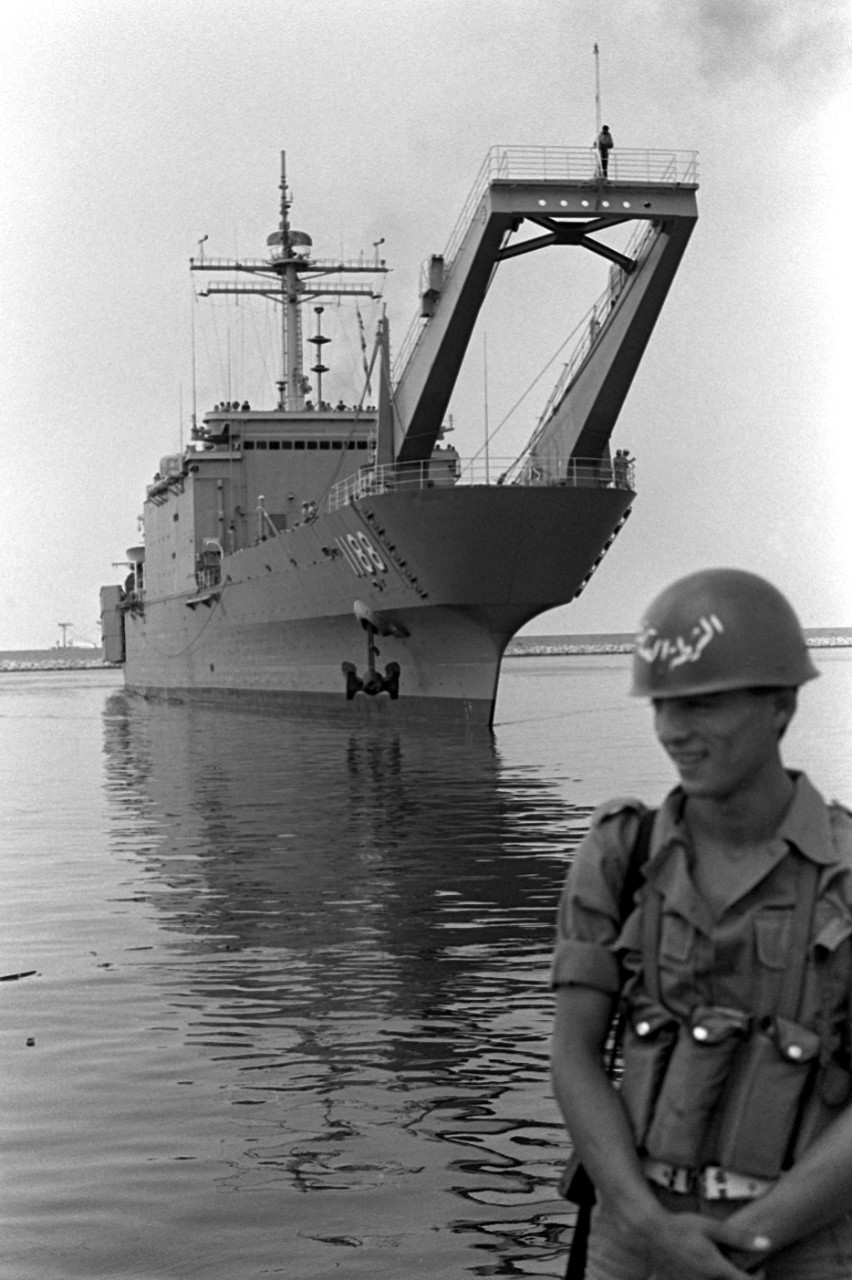 Port bow view of the tank landing ship USS Saginaw (LST-1188) approaching the pier. The ship disembarked vehicles used by Marines assigned to Lebanon as part of a multinational peacekeeping force after a confrontation between Israeli forces and the Palestine Liberation Organization. (National Archives identifier: 6370386) 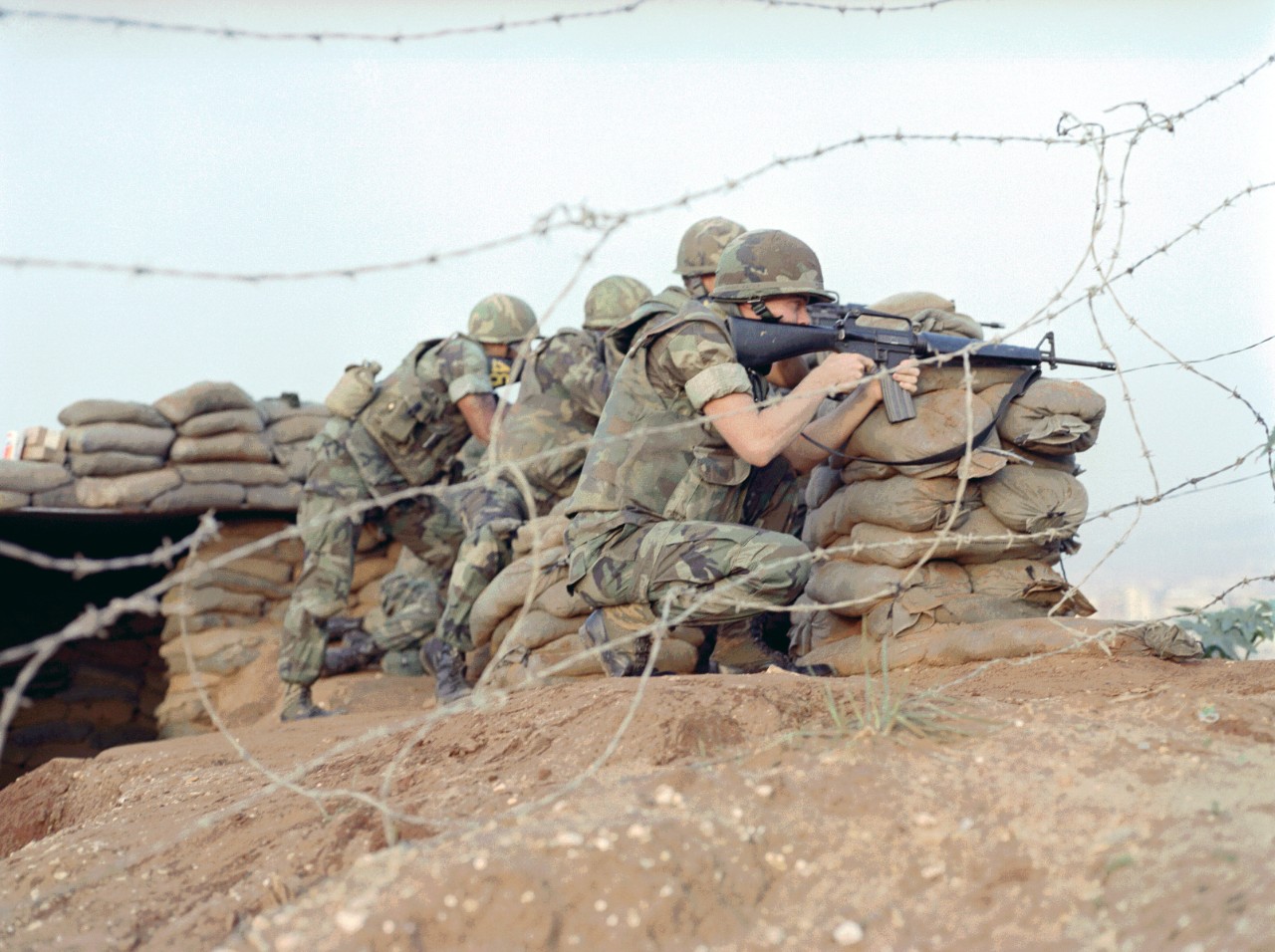 U.S. Marines armed with M16 rifles took cover behind sandbags during a terrorist attack, 1 April 1983. The Marines deployed to Lebanon as part of a multi-national peacekeeping force following confrontation between Israeli forces and the Palestine Liberation Organization. (National Archives identifier: 6415703) 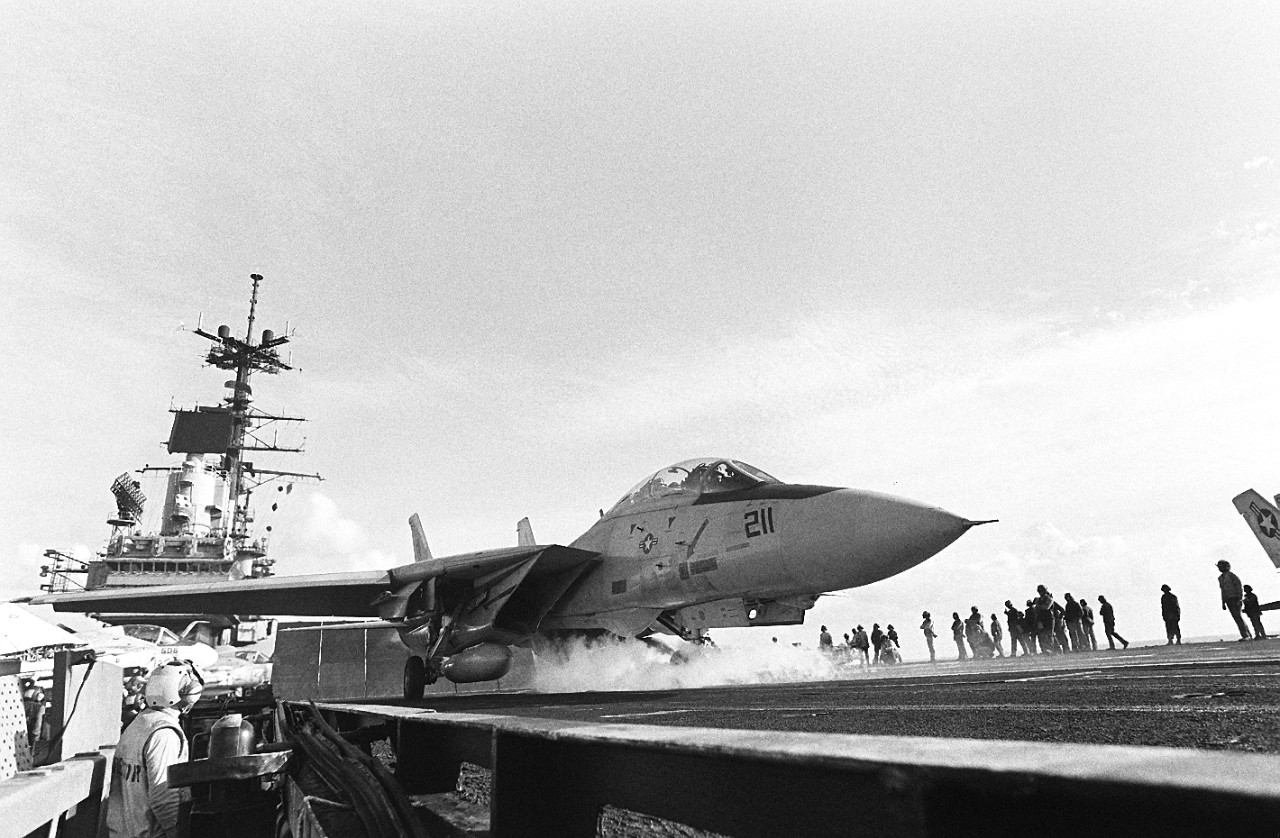 An F-14 Tomcat aircraft takes off from the flight deck of the aircraft carrier USS Independence (CV-62) during operations off the coast of Beirut, Lebanon, 6 December 1983. National Archives identifier: 6381804. 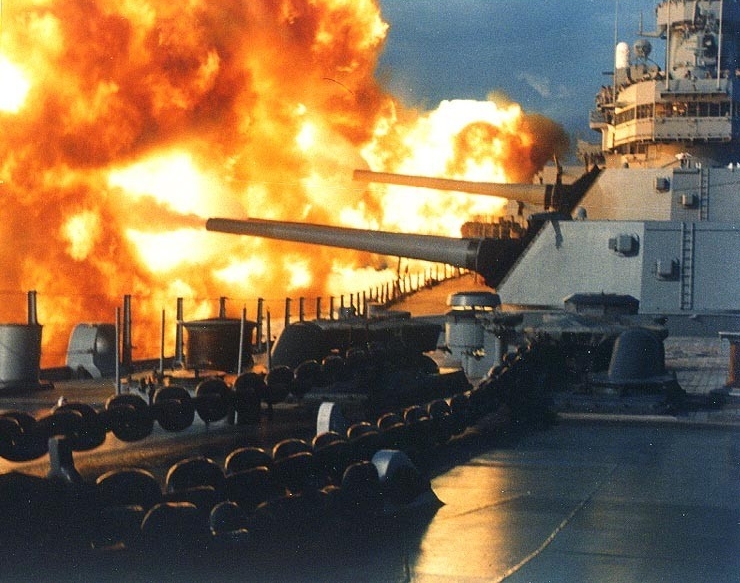 USS New Jersey (BB-62) fires a salvo from her 16/50 guns during a deployment off the coast of Beirut, Lebanon, 9 January 1984. Photographed by PH1 Ron Garrison. Official U.S. Navy photograph from the Department of Defense Still Media Collection. Catalog #: DN-SC-84-06362.