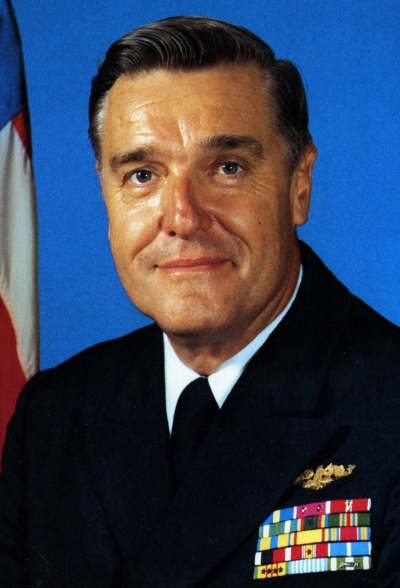 Admiral Watkins served as Chief of Naval Operations as the relationship between the United States and the Soviets began to deteriorate toward the end of the Cold War. The Soviets were expanding their boundaries of operations in the oceans, including sailing into the Gulf of Mexico.

During his tenure as CNO, Admiral Watkins developed a maritime strategy for dealing with the Soviet navy, keeping their naval forces on the defensive and ultimately demonstrating to the world that the United States Navy was a formidable foe.

It would not be an easy task. According to a Congressional Budget Office report in March 1982, between 1970 and 1980 the number of ships in the Navy fell from 847 to 538 and uniformed personnel declined from 675,000 to 525,000. Watkins’ predecessor, CNO Thomas B. Hayward, stated the Navy “had been at virtually a wartime operating tempo since the beginning of the Vietnam conflict and has never stood down.”

Admiral Watkins would be one of the early supporters of President Ronald W. Reagan’s military buildup to defend against a missile attack, believing nuclear deterrence would work well as a defense mechanism rather than just perceived just as an offensive threat.

The Reagan administration proposed a 600-ship initiative to bring the armed forces back into fighting shape to prepare for a potential face-off with the Soviets. The ambitious five-year plan called for 133 new construction ships at the cost of more than $80 billion, but the 600-ship initiative was never achieved under mounting pressures to reduce the national deficit.

Admiral Watkins would work tirelessly to oversee the rebuilding program that would continue the Ohio-class ballistic missile submarine program first commissioned in 1981; a redesign of the Los Angeles-class attack submarines that allowed 12 new vertical launch tubes capable of firing Tomahawk missiles; and ramping up the production of the remaining seven Nimitz-class aircraft carriers to join USS Nimitz, USS Dwight D. Eisenhower, and USS Carl Vinson. The 600-ship initiative also included recommissioning the pre-World War II-era Iowa-class battleships—Iowa, New Jersey, Missouri, and Wisconsin—that had already served in four wars. They were to be refitted with Tomahawk and Harpoon cruise missiles to augment their 16-inch guns. The plan also called for weaponry that included Harpoons, Tomahawks, and AGM-88 HARM missiles, and the 25 cruisers and destroyers included in the program would be equipped with AEGIS or AEGIS-derivative AAW systems.

Improving the quality of life for Sailors and their families was an immediate priority for Admiral Watkins, who pushed for better pay and more support for spouses and children when the Sailor was deployed. The CNO also encouraged a new generation of officers to become more deeply involved in what the Navy was doing at home and globally. This effort addressed an era he described as one of “violent peace” with a new forward-thinking and forward-deployed maritime strategy.

That strategy would come into play in March 1986 when the Navy challenged—yet again—Libya’s claim to the entire Gulf of Sidra by crossing Muammar al-Qadafi’s “Line of Death.” On March 23 Libya launched four surface-to-air missiles toward USS America’s F-14A Tomcats conducting freedom of navigation operations that would begin a day of missile-launching attacks and counterattacks. By the end of the airstrike, there were no American losses, but 35 Libyan seamen were killed and there were numerous material losses.

James David Watkins was born on March 7, 1927, in Alhambra, California, the sixth of seven children. After receiving his bachelor’s degree from the U.S. Naval Academy in 1949, Watkins served on submarines during the Korean and Vietnam wars. In 1958 he earned a master’s degree in mechanical engineering from the U.S. Naval Postgraduate School in Monterey, California.

As a nuclear officer, Admiral Watkins served under Admiral Hyman G. Rickover during the development of the nuclear propulsion program.

He held many prestigious posts after his retirement from 37 years of naval service in 1986. After completing his term as Chief of Naval Operations, Admiral Watkins was appointed by President Reagan to lead the Presidential Commission on the Human Immunodeficiency Virus Epidemic; from 1989 to 1993 he served as the Secretary of Energy for President George H. W. Bush; and in 2001 he was named chairman of the Commission on Ocean Policy, a position created by President George W. Bush.

Two weeks after retiring as CNO on June 30, 1986, Admiral Watkins gave the eulogy at the funeral for his mentor and long-time friend, Admiral Hyman G. Rickover, who he credited with shaping him as a young officer. “The Navy changed me,” Admiral Watkins told The Los Angeles Times in 1988. “(Admiral Hyman) Rickover had an intense interest in getting involved with the best and the brightest, and he drove it very hard. . . . He got me to understand the importance of education and doing everything you can to measure up to your God-given potential.”

Admiral Watkins died at his home in Alexandria, Virginia, on July 26, 2012. Interment was at Arlington National Cemetery.