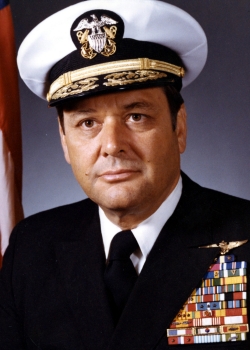 The seasoned admiral had the difficult task of leading the Navy through the challenges of inflation, defense spending cuts, and the effects of the 1973 Arab oil embargo.

As the tension between the United States and the Soviet Union increased after the fall of Saigon in 1975, and communism spread into Angola by Soviet and Cuban forces in 1976, Admiral Holloway was among other military leaders who held the line as the Soviets continued to flex their growing fleet further and further into international waters. Playing a crucial role in negotiations during Strategic Arms Limitation Talks (SALT) with the Soviet Union, Admiral Holloway’s direct influence on President Gerald Ford ended the SALT II Treaty proposal to ban the cruise missile, which is still the Navy’s principal offensive weapon for destroyers, cruisers, and submarines.

This led to one of Admiral Holloway’s most significant contributions as CNO: establishing the Battle Force Fleet organization. By using understandable terms and language, the instruction provided a succinct and common reference for all naval personnel while providing Congress, the Department of Defense, and the Joint Chiefs of Staff a deeper understanding of the Navy’s roles in effective joint strategies, plans, and operations.

While under Admiral Holloway’s watch, the Navy assisted in the evacuation of thousands of Cyprus residents during political unrest between Greek and Turkish Cypriots in 1974. The Navy also provided support in 1976 during evacuation of Americans from Lebanon and the Korean DMZ incident when two American Army officers were killed by North Korean soldiers during a tree-trimming in the Joint Security Area.

Admiral Holloway’s leadership and ability to advocate for the Navy were also evident during the early days of the F/A-18 Hornet. In 1975, the CNO successfully argued to Secretary of Defense James Schlesinger to sign off on the Navy’s fighter-attack F-18 type rather than the Air Force preference of the F-16 Light Weight Fighter (LWF). The F-18 type was designed for the all-weather capable AIM-7 Sparrow III missile, while the F-16 LWF was designed for the Sidewinder missile system that operated best under clear-air conditions. The F/A-18 replaced both the A-7 attack plane and the F-14 Tomcat, with the Hornets coming into the fleet in 1983.

James Lemuel Holloway III was born in Charleston, South Carolina, in 1922. He and his father, Admiral James L. Holloway Jr., both served as four-star admirals in the U.S. Navy while on active duty, the only son and father to do so to date. This member of the Naval Academy class of 1943 reached the fleet a year early due to acceleration of graduation for several wartime-era classes. He served on destroyers during World War II, torpedoeing a Japanese battleship at the Battle of Surigao Strait as gunnery officer of USS Bennion (DD-262).

Following World War II, he became a naval aviator. He flew missions during the Korean War and in 1959, as the Deputy CNO for Air Warfare, developed the Naval Air Training and Operating Procedures Standardization (NATOPS) program. This program is still in effect more than 55 years later and has been credited with substantially reducing naval aviation accidents.

He commanded the first nuclear-powered carrier, USS Enterprise (CVAN-65), during two Vietnam War combat cruises in the Gulf of Tonkin and, returning to the Pentagon in 1968, he helped establish the Navy’s Nuclear Powered Carrier Program, building USS Nimitz and paving the way for nine more supercarriers. Other accomplishments include commanding Sixth Fleet Carrier Striking Force during the Syrian invasion of Jordan in 1970 and commanding Seventh Fleet in 1972 during the Vietnam War.

Having served 36 years on active duty, Admiral Holloway retired in 1978, but he remained closely involved with the Navy. In 2007, Holloway published Aircraft Carriers at War, a book that he describes as a “contemporary perspective of the events, decisions, and outcomes in the history of the Cold War—Korea, Vietnam, and the Soviet confrontation—that shaped today’s U.S. Navy and its principal ships-of-the-line, the large-deck, nuclear-powered aircraft carriers.”

Admiral Holloway served as president of the Naval Historical Foundation from 1980 to 1998 and ten years more as chairman, after which he has served as elected chairman emeritus. His support for the Navy’s official history programs made possible the Naval History and Heritage Command’s online Dictionary of American Naval Fighting Ships project, one of the most important U.S. naval history resources available to a worldwide audience.