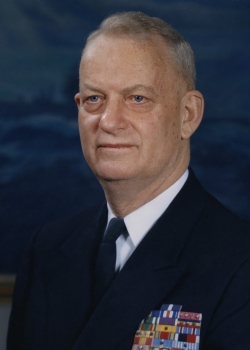 Admiral Burke served an unprecedented six years in office as Chief of Naval Operations. These were years of intensified international friction and of revolutionary changes in ships and weaponry of the U.S. Navy. The undersea nuclear weapon capability conceived and developed in the brief span of five years added a vast new dimension to naval warfare.

The Chief of Naval Operations established a Special Project Office late in 1955, charged with the responsibility of developing a Fleet Ballistic Missile for sea launch. Admiral Burke backed the project with priority call on professional talent and other resources. Submarine USS George Washington submerged in the Atlantic on July 20, 1960, and fired the first Polaris missile. The missile arched to a target more than a thousand miles downrange. This phenomenal weapon married the nuclear submarine to the long-range solid fuel ballistic missile. Shortly, the Fleet Ballistic Missile Submarine Missile System would be the keystone for American nuclear deterrence.

Like his predecessors, Admiral Burke saw the fleet’s combat readiness and fighting edge as the primary missions of the Chief of Naval Operations. Before Congress, he ably presented the country’s need for new types of ships to counter a growing Soviet naval strength. To provide new construction with maximum and flexible capability, he pressed forward with modern shipboard equipment development.

While breakthroughs in missiles and nuclear power were unfolding, Admiral Burke remained attuned to the requirements for powerful conventional forces afloat. He staunchly defended the aircraft carrier and the versatility of embarked aircraft. Concerned with “block obsolescence,” he sponsored new construction and the successful FRAM (Fleet Rehabilitation and Modernization) program to extend the useful life of older destroyers.

A strong advocate of the role of small navies in combat, the Chief of Naval Operations contended that ships loaned to allies should be in top condition, ready for immediate service.

Admiral Burke held that the likelihood of a nuclear confrontation was much less than chances of brush fire conflicts breaking out any time or any place, and that these could be cooled or confined by a U.S. naval presence. Such proved to be the case during the Suez crisis, the troubles in Jordan, across the world off the islands of Quemoy and Matsu, and in 1958 when the Lebanese government, threatened by aggression, asked for assistance. Marines from U.S. Sixth Fleet ships were landed at Beirut.

The Chief of Naval Operations responded to Cold War crises with notable initiative and keen insight. He rapidly ordered naval forces deployed, diverted if necessary, and so positioned in international waters as to render maximum service in implementing national policy decisions.

The Navy “is people” was a point that Admiral Burke constantly emphasized during his tenure as Chief of Naval Operations. He opened additional avenues of communication so that, from flag officer to seamen, all “would know, not only what they were doing, but why.”

Arleigh Albert Burke was born in Boulder, Colorado, on October 19, 1901. The first Chief of Naval Operations to be born in the 20th century, he graduated from the Naval Academy in 1923. Between tours of duty in various battleships and destroyers, he earned a master of science degree in chemical engineering at the University of Michigan as a Navy postgraduate student in explosive ordnance.

Burke was on shore duty at the Naval Gun Factory in Washington, DC, in December 1941. Ordered to the South Pacific, he commanded several destroyer squadrons. It was while he had Destroyer Squadron 23, the “Little Beavers,” that he earned the nickname “31-Knot Burke.” With one ship having boiler problems, DESRON 23 had been held to 30 knots. While en route to a muster point, Burke radioed he was pushing his squadron to 31 knots. With Burke commanding, Destroyer Squadron 23 participated in more than 20 engagements; destroyed a Japanese cruiser, nine destroyers, and a submarine; and accounted for some 30 enemy aircraft.

In March of 1944, Captain Burke reported as Chief of Staff to Admiral Marc Mitscher, Commander, Fast Carrier Task Force 58/38 and saw extensive action with that force until just prior to the Japanese surrender.

During the Korean War, Rear Admiral Burke served as Deputy Chief of Staff to Commander, U.S. Naval Forces, Far East; commanded a cruiser division; and was a member of the Military Armistice Commission. He then returned to duty in the Office of the Chief of Naval Operations as Director of the Strategic Plans Division until 1954. In April of that year, he took command of Cruiser Division Six, and in January 1955 he became Commander, Destroyers, Atlantic, from which assignment he was appointed Chief of Naval Operations by President Dwight D. Eisenhower.

Admiral Burke was transferred to the retired list on August 1, 1961. In ceremonies that day at the Naval Academy, his four star flag was struck, and the Secretary of the Navy expressed the “thanks of a grateful Nation and the enduring affection of sailors everywhere.” He died January 1, 1996, at National Naval Medical Center in Bethesda, Maryland, and is buried at the U.S. Naval Academy cemetery in Annapolis.