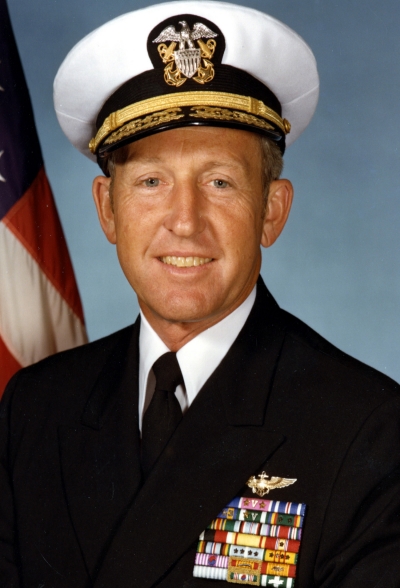 During the years following the end of the Vietnam War in 1975, the Navy was faced with the challenges of an all-volunteer force after the draft ended in 1973. Many draftees left when their term was up. A number of noncommissioned officers, seeing improved prospects for pay and quality of life in the civilian sector, also left, taking with them decades of collective expertise. Retention rates fell from 64 percent to 45 percent. It was during this time that Admiral Hayward became Chief of Naval Operations.

Testifying before Congress, Admiral Hayward called this mass exodus a “hemorrhage of talent” that severely affected the combat readiness of the Navy. In 1980, the year Army Chief of Staff General Edward C. Meyer coined the term “hollow force,” the lack of boiler technicians and machinist mates forced USS Canisteo to be removed from operations. Unless the President, Congress, and the public fulfilled their commitment to raise pay to a level comparable to that of the civilian sector and improve living standards, the Navy would be forced to place more of the fleet in an inactive status indefinitely.

In a 2002 interview with Paul Stillwell for the book Reminiscences of Admiral Thomas B. Hayward, U.S. Navy (Retired), Admiral Hayward summed up the challenges: “Not enough people, not the right kind of people, nobody’s been trained.” One of his first initiatives as CNO was to travel to all of the training commands. He observed tiles falling out of the ceilings, insufficient tools to train the Sailors, and bases in disrepair. In response, Admiral Hayward directed his admirals, “You find the money to fix that problem. We cannot tolerate that. . . .Let’s get some pride back into who we are.” Within six months, Admiral Hayward indicated he was pleased to see attitudes turn around.

Admiral Hayward also looked to his senior enlisted leadership, not to put out new directives or instructions, but to “execute the ones we have in a professional manner,” as he explained in a 1981 All Hands Magazine article. He emphasized that “our standards must be more than a mirror of society. Civilian members of our society have not taken solemn oaths; we in the Navy have. . . .Our standards must be visibly higher than those of the society around us.”

Admiral Hayward tied the issue of retention to the Navy’s need to outpace the Soviet threat and maintain supremacy on the ocean. Without crucial staffing, the most advanced warfighting systems and ships in the world would not be ready to fight when called upon. The fleet was “undermanned and overworked,” Admiral Hayward recalled during a Stillwell interview. He recognized that “the Vietnam demand was an intense one, and that intensity kept the focus properly on Vietnam.” But in the meantime, a Soviet naval threat loomed.

The U.S. Navy began operating in the Indian Ocean to counter the Soviets, who were increasingly deploying “out of area,” according to Hayward’s 1979 strategic document “The Future of U.S. Sea Power.” The Soviets were also building up their submarine fleet and Backfire-B bombers. Yet thanks to the investment made in a little atoll about 1,000 miles south of India called Diego Garcia, the Navy had nuclear deterrence capability against the Soviets. Admiral Hayward further strengthened the Navy to meet the challenge of a growing Soviet power by building sophisticated submarines, surface ships, and aircraft and promoting a global, offensive-minded maritime strategy. The 12-carrier battle group was his design.

When the Iran hostage situation began in 1979, the Navy had already been operating continuously in the area. “But it was stretching the heck out of our forces,” Admiral Hayward recalled during a Stillwell interview. The Navy was also operating in the Mediterranean and Western Pacific. With the resources and manning available, the Navy was “trying to meet a three-ocean requirement with a one-and-a-half-ocean Navy.”

Admiral Hayward warned that just because the nation was “technically” at peace, the Navy should not relax. “We should not be lulled into thinking that the job will be any easier because we are operating in a ‘peacetime’ environment,” he advised in the March 1982 All Hands Magazine. During a 1982 change of command for the aircraft carrier USS Nimitz, Hayward continued to press for the need of both manning and ships: “Our narrow margin of maritime superiority over the Soviet navy has vanished.”

Admiral Hayward managed to successfully argue for an increase in fleet capabilities. The citation for his 1982 Defense Distinguished Service Medal reads: “He was singularly effective in facilitating just pay and compensation for military personnel, and in initiating critical building programs to enhance essential naval warfare capabilities.”

Thomas Bibb Hayward was born in 1924 in Glendale, California. After serving as an enlisted Sailor during World War II, Hayward attended the U.S. Naval Academy, graduating in 1947. An aviator, he repeatedly served on board aircraft carriers at sea and in training and test pilot commands ashore. Combat command of Carrier Air Wing Ten and aircraft carrier USS America during the Vietnam War rounded out his sea duty, and he served as Commander, U.S. Seventh Fleet and then as Commander in Chief, U.S. Pacific Fleet prior to being named CNO.

Admiral Hayward passed away on 3 March 2022.