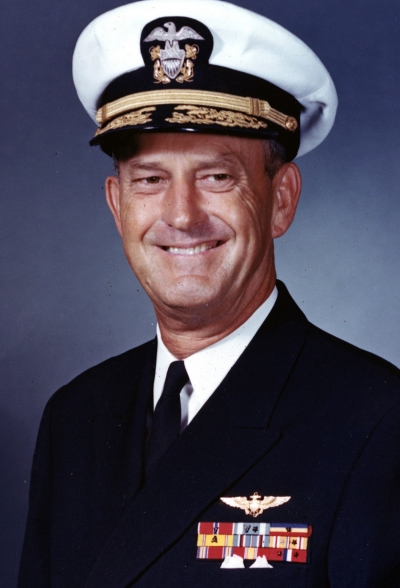 Admiral McDonald shaped and guided the extensive buildup of naval strength consonant with an expanding U.S. commitment in Southeast Asia following the Tonkin Gulf incident in August 1964 and the retaliatory carrier air strikes.

U.S. Navy operations spanned the widest range from carrier strikes to coastal interdiction, gunfire support, amphibious landings, riverine warfare, and logistic support. The unchanging importance of the sea lanes was once again demonstrated by Vietnam, where all of the bulk fuel, more than 99 percent of the ammunition, and 95 percent of all other cargoes went by ship.

The Chief of Naval Operations took justifiable pride in the responsiveness of the Navy in projecting national power quickly and effectively. Before Congress and to the American public, Admiral McDonald set forth his views on the mobility and flexibility of naval forces, which gave them the inherent capability for selective fine tuning. “We can,” he said, “strike with swift precision, if ordered, doing harm only to those who would harm us; we could, if necessary, cause overwhelming catastrophe to our enemies; and we can carry out any mission between those extremes. To accomplish these finely graduated purposes, we operate from mobile floating bases limited by little else than an adequate depth of water for safe navigation . . . sea-based forces require neither international nor local license to move anywhere on the high seas.”

In addition to Southeast Asian operations and continuing crises in other areas of the Far East, the Navy was able to fulfill its worldwide responsibilities. The government of the strife-torn Dominican Republic requested the presence of U.S. Navy ships and Marines. The Sixth Fleet remained a stabilizing influence in the Mediterranean. At the same time diverse other requirements, including the training and readiness of space recovery forces, were met. In 1964, an all-nuclear task force of carrier USS Enterprise, cruiser USS Long Beach and frigate Bainbridge circumnavigated the world without refueling and without logistic augmentation. This Operation Sea Orbit dramatically demonstrated the capabilities and potential of nuclear-propelled ships. Later, off Vietnam, the nuclear ship went into combat for the first time in history.

By 1965, the Chief of Naval Operations could announce that the last of the programmed total of 41 fleet ballistic missile submarines was under construction and that development of the advanced Poseidon missile, with greater range, payload, and accuracy than Polaris, was authorized.

A General Order on the assignment of authority and responsibility in the Department of the Navy, issued by Secretary of the Navy Paul Nitze in April 1966, gave the Chief of Naval Operations direct command over the Naval Material Command and its bureaus.

Admiral McDonald placed strong emphasis on antisubmarine warfare and saw to it that an adequate segment of the Navy’s budget was channeled for progressive development in this critical field. Likewise, the Navy made increasingly important contributions to oceanographic research. Programs typified by SEALAB and Alvin were intensified.

The retention of highly trained Navy pilots and technical ratings was a matter of concern. To make a naval career more attractive, Admiral McDonald repeatedly and successfully pushed for better housing, pay, enhanced medical benefits, shipboard habitability, and—consistent with the needs of the sea service—a more normal home life for all naval personnel.

David Lamar McDonald was born September 12, 1906, in Maysville, Georgia. He entered the Naval Academy in 1924, graduated four years later, went to battleship duty and on to flight training at Pensacola. Designated a naval aviator in 1931, various aviation duties followed, including a tour with Fighter Squadron Six in USS Saratoga and at Pensacola as a flight instructor.

At the outbreak of World War II, Lieutenant McDonald was serving on carrier USS Ranger as Flag Secretary to Commander, Aircraft, Atlantic Fleet. Later in the conflict he was air officer and executive officer of USS Essex and on the staff of Commander, Air Force, Pacific Fleet.

Postwar duties included assignment as Director of Military Requirements in the Bureau of Aeronautics, Aide to the Assistant Secretary of the Navy for Air and the Under Secretary of the Navy, attendance at the National War College, and command of the carriers USS Mindoro and USS Coral Sea. He attained flag rank in 1955 and was ordered as Director of the Air Warfare Division, Office of the Chief of Naval Operations. In November 1957, Admiral McDonald was named Deputy Assistant Chief of Staff at Supreme Headquarters Allied Powers, Europe. Command of a carrier division followed until July 1961, when he reported as Commander, Sixth Fleet and Commander, Naval Striking and Support Forces, Southern Europe. From April 9, 1963 until named Chief of Naval Operations, Admiral McDonald was Commander in Chief, U.S. Naval Forces, Europe, with additional duty as Commander in Chief, U.S. Naval Forces, Eastern Atlantic and Mediterranean and Commander of the Naval Component of the U.S. Forces in Europe.

The citation accompanying the Legion of Merit medal awarded to Admiral McDonald before he transferred to the retired list on August 1, 1967, noted his “rare ability to identify central issues, to balance economic requirements against military necessities, and to ensure that the capabilities of the military services are expeditiously and cooperatively employed in the best interest of the United States.”

Admiral McDonald died at the age of 91 in 1997 and is buried at the United States Naval Academy Cemetery in Annapolis, Maryland.