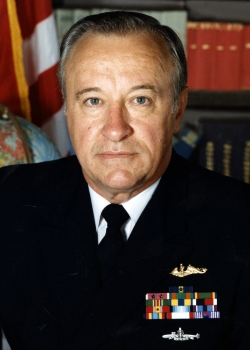 Admiral Carlisle A. H. Trost facilitated the transition of the U.S. Navy from a Cold War focus on sea control to a new emphasis on regional littoral conflicts.

He confronted growing tensions in the Middle East, complicated by the Iran-Iraq War. Less than one year into his tour, on May 17, 1987, the USS Stark was hit by two missiles fired by an Iraqi aircraft that killed 37. Starting in 1987 and for more than a year, the Navy supported Operation Earnest Will, escorting Kuwaiti-owned tankers to ensure their safe passage in the Gulf. In response to a missile attack on the MV Sea Isle City, the Navy launched Operation Nimble Archer to destroy two Iranian oil platforms. Only a few months later, on April 14, 1988, the guided-missile frigate Samuel B. Roberts, while on escort patrol in the Persian Gulf, was severely damaged by an Iranian mine. In response the Navy retaliated by attacking more oil platforms and Iranian vessels during Operation Praying Mantis. While hostilities were active in the Persian Gulf, there were operations close to home as well requiring naval capabilities. In 1989 the U.S. Navy provided critical support to SEAL and other military forces operating to restore democracy in Panama.

Just one year into Admiral Trost’s term as CNO, President Ronald W. Reagan was urging “Mr. Gorbachev, tear down this wall.” By the end of Admiral Trost’s term, the Berlin Wall was down. As the Soviet Union crumbled, however, Admiral Trost never wavered from his belief that the Navy needed to remain vigilant with its forward presence. He warned of “governments of fanatics” whose national policy was to destroy democracy. “They move in wherever they perceive a weakness. They use terrorism as an instrument; they use it coldly and deliberately. In many ways, these governments are an even more visible threat to us . . . .”

Among his goals as CNO was to maintain the Navy’s global maritime superiority, “a sufficient force to carry out our national strategy of deterrence, crisis control and support our allies,” not only from larger threats, such as the Soviet Union and China, but also from smaller nations, drug traffickers, and terrorists. To achieve that mission would require the U.S. Navy to maintain its advantage in antisubmarine warfare, using forward flexible forces that only the Navy could provide.

Admiral Trost made joint international exercises with allies a part of the Navy’s operational and training missions. He invited CNOs from other countries and also visited them to assess their viability as allies and partners.

In October 1989 Admiral Trost made a historic visit to the Soviet Union where he met with his Soviet counterpart and fellow submariner, Fleet Admiral Vladimir Chernavin. His trip’s purpose was to enhance mutual understanding and reduce tensions between the two countries. Admiral Trost toured a nuclear-powered submarine and cruiser and spoke to more than 1,200 students, faculty, and senior officers at the Soviet naval academy.

Admiral Trost dealt with more than budget cuts and the Soviets. A series of mishaps in 1989 forced Trost to suspend all air, land, and sea operations for 48 hours in order to review safety procedures. Among those was the explosion on April 19 that killed 47 gun turret crewmen on the battleship USS Iowa. Within hours of the incident, Trost issued a moratorium on 16-inch guns being fired.

Through his guidance and perseverance in keeping the Navy and Sailors at operational readiness, the United States was prepared to lead a multinational force in the first Persian Gulf War in 1991, months after his departure from office.

A native of Illinois, Carlisle Albert Herman Trost was born in Valmeyer in 1930. After graduating first in his class from the U.S. Naval Academy in 1953, he joined the crew of a destroyer and then attended submarine school and was trained in nuclear power, graduating number one in that class as well. In 1956 he was stationed on USS Sirago.

As a junior officer he was awarded an Olmstead Scholarship to study at the University of Freiburg, Germany. During the 1970s Admiral Trost completed assignments as the naval aide to the Secretary of the Navy; Assistant Chief of Naval Personnel; and Director, Navy Program Planning. During his more than 37 years of commissioned service, Admiral Trost served at sea in destroyers and diesel-powered and nuclear-powered submarines. He was executive officer of two nuclear-powered submarines and commanding officer of a fleet ballistic missile submarine.