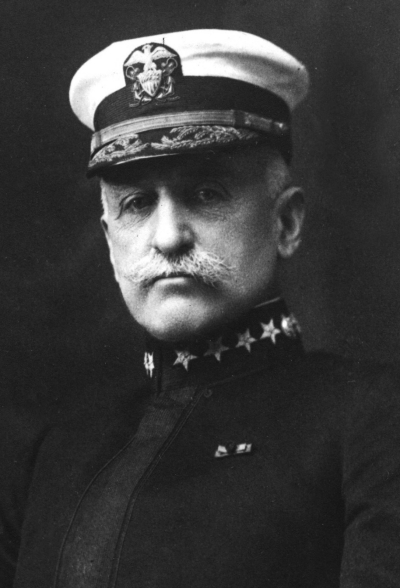 War raging in Europe threatened to involve the United States as the first Chief of Naval Operations took up his duties and began to organize and staff the new office. In order that “there would no longer be the former separation of the material preparation of the fleet from its operations,” the duties of the aide for material were assigned to the Chief of Naval Operations in June 1915. The Navy’s preparedness and expansion, war planning and, after April 6, 1917, when the nation entered World War I, direction of overall combat operations were the responsibilities confronting Admiral William Benson.

Readiness of the forces afloat and of the Navy’s shore establishment to meet wartime demands was a matter of urgency. Admiral Benson initiated a systematic inspection of merchant vessels to determine suitability for conversion to naval auxiliaries. Concerted attention was directed to naval aviation, and seaplane development went forward on a priority basis. Naval district organization was modernized, and plans were made for navy yard improvement to absorb the stresses of war expansion.

Admiral Benson was an ex-officio member of the Naval Consulting Board named by Secretary of the Navy Josephus Daniels in the fall of 1915 under the chairmanship of Thomas A. Edison. This important board focused the efforts of some of the country’s most distinguished scientific and inventive talent on naval matters and sponsored a farsighted and vitally significant industrial census to measure the national capacity to meet war requirements of the sea forces.

The Chief of Naval Operations’ testimony before Congress influenced passage of the 1916 Naval Appropriations Act, authorizing construction of 10 battleships, 6 battle cruisers, 10 light cruisers, 50 destroyers, and 67 submarines—the largest building program authorized to that date and designed to rank the U.S. Navy as “second to none.” Admiral Benson also successfully persisted in his efforts to increase naval personnel strength.

Germany’s unrestricted submarine warfare campaign with its disregard for neutral rights on the high seas was a major factor in bringing the United States into World War I. Under the Secretary of the Navy, the Chief of Naval Operations exercised direction and control of the mammoth naval effort. A stream of destroyer- and cruiser-escorted convoys carried millions of troops and their supplies through U-boat-infested waters to the battlefields of France. Destroyers based on Atlantic coast ports and in Europe were joined by naval aircraft for a vigorous offensive against the German submarines. The U.S. Navy rapidly developed and produced antisubmarine mines and took the leading role in laying the huge North Sea Mine Barrage from Scotland to Norway. A division of American battleships operated with the British Grand Fleet and, in France, heavy naval guns mounted on railway cars and manned by U.S. gunners pounded enemy targets at long range.

Following the defeat of the Central Powers and the Armistice of November 11, 1918, Admiral Benson went to Paris as naval adviser to the U.S. delegation at the peace conference and as a member of the Admirals of Allied and Associated Powers Committee, which recommended the naval provisions of the treaty. He strongly defended American interests in reference to freedom of the seas and fleet expansion. Admiral Benson retired from the naval service on September 25, 1919, urging resumption of the construction of major combatant ships that had been suspended during the war in order to concentrate production on antisubmarine forces.

William Shepherd Benson was born in Macon, Georgia, on September 25, 1855, and entered the U.S. Naval Academy from his native state, graduating with the class of 1877. He saw early service in the historic frigate USS Constitution (“Old Ironsides”) and the USS Hartford—of Civil War fame. In 1883 Benson was attached to USS Yantic in search of the lost Greely arctic exploring expedition. The future Chief of Naval Operations served three tours at the Naval Academy during the 1890s and early 1900s as an instructor in seamanship and senior assistant to the Commandant of Midshipmen (termed “Cadets” at that time). While at the academy, Benson, then a lieutenant commander, revised Admiral Stephen B. Luce’s Textbook of Seamanship.

Duty on board USS New York and USS Kearsarge was followed by command of USS Albany in 1908, and a year later assignment as Chief of Staff, U.S. Pacific Fleet. Promoted to captain in 1909, Benson commanded the battleships USS Missouri and USS Utah. In August 1913 he was ordered to Commandant of the Philadelphia Navy Yard with a supervision over the Third, Fourth, and Fifth Naval Districts. He was on duty in Philadelphia when appointed Chief of Naval Operations. Always a champion of a strong American merchant marine, Admiral Benson served as chairman of the United States Shipping Board and trustee of the Emergency Fleet Cooperation after his retirement from the Navy. He died at his Washington home on May 20, 1932, and is buried in Arlington National Cemetery. Of this wartime and first Chief of Naval Operations, Edward M. House said, “Probably no other American Admiral ever had so many momentous questions come before him or met them more wisely.”