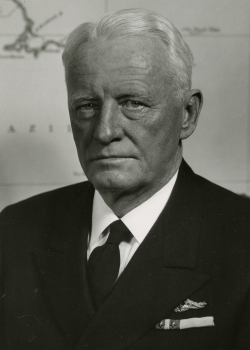 After brilliantly leading American forces to victory in World War II, Fleet Admiral Nimitz, the Commander in Chief, U.S. Pacific Fleet and Pacific Ocean Areas, hauled down his flag at Pearl Harbor and relieved Fleet Admiral King as Chief of Naval Operations. Accorded a hero’s welcome at home, the quiet, self-effacing officer described himself as merely “a representative of the brave men who fought” under his command.

When Admiral Nimitz took over as Chief of Naval Operations, rapid demobilization was the order of the day. He was faced with the perplexing problem of maintaining an effective fleet to carry out extensive operational commitments throughout the world. In the Pacific, naval vessels engaged in “Operation Magic Carpet” brought home more than two million American servicemembers over a period of six months. Japanese, Chinese, Korean, and other troops were lifted to their homelands, as the Navy conducted operations in the disarmament and the transfer of control and occupation of territories previously held by the enemies.

The task of reducing the most powerful Navy in history to a fraction of its wartime peak entailed drastic cutbacks in ships, personnel, and the shore establishment; surplus property disposal; and cancellations of construction contracts. Fleet Admiral Nimitz provided the administration necessary to achieve this huge rollback in an orderly fashion without destroying the Navy’s effectiveness. Programs were initiated for the establishment and maintenance of active and reserve fleets with the potential strength and readiness required to support national policy.

Fleet Admiral Nimitz faced a new set of challenges to American naval power. With the destruction of the German and Japanese navies and the advent of the atomic bomb, the continuance of a major U.S. Navy was questioned. Nimitz was persuasive in his efforts to retain balanced naval forces.

In response to the campaign to merge the military services within a single executive department and under a single Chief of Staff, his leadership played a key role in achieving a reasonable compromise, one in which naval aviation and the Marine Corps remained under the Department of the Navy.

The Navy effectively met the new challenges of the Cold War. The deployment of naval forces to crisis points in the Mediterranean and elsewhere was a major influence in stemming Communist advances.

In the midst of overriding demobilization pressures and extensive operational commitments overseas, Fleet Admiral Nimitz remained acutely aware that the efficiency of the postwar Navy hinged on the continued development and use of technological innovations generated by the war. To prepare to meet future threats, the Navy stressed research and development. Emphasis was placed on antisubmarine warfare and, in January 1946, a Coordinator of Undersea Warfare was established in the Office of the Chief of Naval Operations with responsibilities for both submarines and antisubmarine warfare. The Chief of Naval Operations also directed attention to the potential of guided missiles as seagoing weapon systems and to nuclear energy for ship propulsion. Prophetically, he reported, “the Navy of the future will be capable of launching missiles from surface vessels and submarines, and of delivering atomic bombs from carrier-based planes.” As his two-year term drew to a close late in 1947, the first post-World War II Chief of Naval Operations could take satisfaction that the Navy had weathered the hazards of demobilization and reorganization. Transition to a peacetime posture had been the main problem when Fleet Admiral Nimitz assumed office; Cold War operations and preparedness for possible conflict were in the forefront when he left.

Chester William Nimitz was born in Fredericksburg, Texas, on February 24, 1885. After graduation from the
Naval Academy in 1905, he was on the China Station
for two years where, as an ensign, he had his first command, the gunboat USS Panay. Nimitz was with the young submarine service until 1913 when he was sent to Germany and Belgium to study diesel engines. Duty in the USS Maumee, the first diesel powered surface ship in the U.S. Navy, followed and, during
World War I, he was Chief of Staff to Commander, Submarine Force, U.S. Atlantic Fleet. Post-World War I assignments included a tour as Senior Member, Board of Submarine Design in the Navy Department; as executive officer of USS South Carolina; command of USS Chicago; on the staff of Commander in Chief, U.S. Fleet; and as a student at the Naval War College. Speaking at the college after World War II, Fleet Admiral Nimitz reflected on the value of his training there: “The war with Japan had been reenacted in the game room here by so many people in so many different ways that nothing that happened during the war was a surprise—absolutely nothing except the Kamikaze tactics toward the end of the war; we had not visualized those.”

In August of 1926 he was ordered to the University of California where he established one of the first Naval Reserve Officer Training Corps units. Various submarine and surface assignments followed, and in 1933 he commanded USS Augusta, flagship of the Asiatic Fleet. Again returning to Washington, DC, he was Assistant Chief of the Bureau of Navigation for three years, back to sea to command a battleship division, and then Chief of the Bureau of Navigation in 1939. Admiral Nimitz was serving as Bureau Chief when he was chosen to be Commander in Chief, U.S. Pacific Fleet. Shortly thereafter he was given the additional responsibilities of joint command as Commander in Chief, Pacific Ocean Areas. He was elevated to five-star fleet admiral rank in December 1944. Fleet Admiral Nimitz was one of the signatories of the Japanese surrender documents on board USS Missouri on September 2, 1945. He signed for the United States as General Douglas MacArthur signed for the United Nations.

Detached as Chief of Naval Operations, he became Special Assistant (Western Sea Frontier) to the Secretary of the Navy. Fleet Admiral Nimitz was extremely active in educational, cultural, and community affairs. He died at his quarters, Yerba Buena Island, San Francisco, CA, on February 20, 1966, and is buried in Golden Gate National Cemetery.