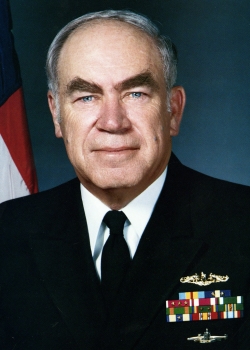 Admiral Frank B. Kelso II led the Navy in a period of significant drawdown of U.S. naval forces in the wake of the presumed end of the Cold War. The Navy staff was reorganized, reduced in size, and diversified while embracing closer joint operations with the other services. The shore establishment was significantly reduced and bases closed to match the needs of a smaller Navy.

He oversaw the introduction of new platforms and systems that improved capabilities, including precision strike operations. The nation persistently called on the naval capabilities throughout his tour, starting with Operation Desert Shield in 1990 and Operation Desert Storm in 1991. He also served concurrently as the CNO and as acting Secretary of the Navy for seven and a half months in 1993, after SECNAV Sean O’Keefe left that office when President George H. W. Bush’s term ended January 20, 1993.

Admiral Kelso oversaw revolutionary changes within the OPNAV staff and profoundly changed the means by which the Navy processed and made decisions. In keeping with Joint Staff practices, he changed “OP” codes to “N” codes, and the staff was reorganized to align with a “Napoleonic” arrangement used by both the Army and the Joint Staff. In a period of dramatic change, he helped transform not merely the organization but also the processes by which information could be shared and considered. He is credited with dramatically changing the means by which more informed decisions could be made by the Navy.

As CNO at the time of the 1991 Tailhook Convention, during which numerous incidents of sexual assault and harassment were found to have occurred, Admiral Kelso found himself at the epicenter of the debate on the treatment of women in the military. Tailhook was a turbulent event for the entire Navy, resulted in the resignation of Secretary of the Navy Henry L. Garrett III on June 26, 1992, and arguably precipitated momentum to support widening opportunities for women in the services. Admiral Kelso, a proponent of allowing women to serve in expanded roles, embraced the integration. While he was CNO, the Navy was the first of the services to act when, on April 28, 1993, Secretary of Defense Les Aspin removed combat aircraft assignments from the positions women could not fill in the military under the Department of Defense’s Combat Exclusion Policy. Despite the challenges Admiral Kelso faced because of Tailhook, the Navy used the scandal to reinforce within its ranks its core values of Honor, Courage, and Commitment.

Admiral Kelso also worked through considerable public interest surrounding a gun turret explosion on the battleship USS Iowa that killed 47 crew members in April 1989. The initial Navy investigation completed before he took office suggested the explosion was a deliberate act most likely caused by one of the crewmembers. The Navy’s findings precipitated Congressional and media interest, and ultimately the CNO apologized to members of the Sailor’s family, stating publicly there was no evidence to support he had committed suicide and “despite all efforts no certain answer regarding the cause of this terrible tragedy can be found.” The four battleships that had been recommissioned in the 1980s—Iowa, New Jersey, Missouri and Wisconsin—were all decommissioned by 1992. All now serve as museum ships.

Frank Benton Kelso II was born on July 11, 1933, in Fayetteville, Tennessee. He attended the University of the South in Sewanee, Tennessee, and graduated from the U.S. Naval Academy in 1956. Kelso served at sea on a cargo ship and diesel-powered and nuclear-powered submarines. He was the engineering officer on a ballistic missile submarine, the executive officer of two nuclear-powered submarines, and the commanding officer of two attack submarines.

Admiral Kelso served as Director, Strategic Submarine Division, Office of the Chief of Naval Operations, and then as Director, Office of Program Appraisal, Office of the Secretary of the Navy. In 1985 he became Commander, Sixth Fleet and NATO Commander, Naval Striking Force and Support Forces, Southern Europe. During this tour members of the Palestine Liberation Front hijacked the cruise ship Achille Lauro and killed a disabled passenger. They negotiated safe refuge and were flown toward Tunisia; the plane was intercepted by U.S. Navy F-14 Tomcats and forced to land in Sigonella, Sicily, where the hijackers were arrested and later tried for murder.

He retired in 1994 after 38 years of service. Kelso returned to his hometown in Fayetteville, Tennessee, in 2003 where he remained until his death at 79 on June 23, 2013. He is buried in Fayetteville in the historic Rose Hill Cemetery.