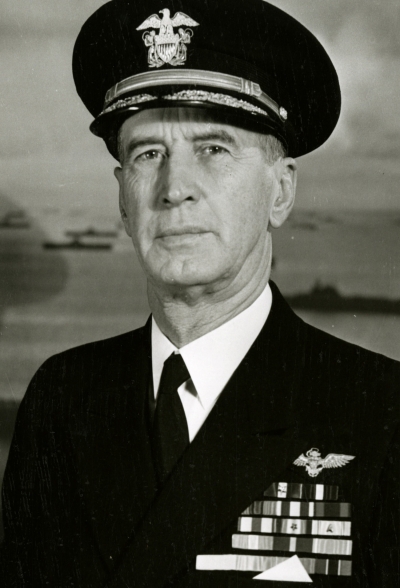 Fleet Admiral King provided American naval leadership for World War II. Even in the darkest days immediately after the Pearl Harbor attack, King never deviated from his basic precept: “We must do all that we can with what we have.” He combined an iron will, decisiveness of character, and insatiable capacity for work with high intelligence and an encyclopedic knowledge of naval subjects. Against all obstacles, these strengths and adherence to the principle of the initiative of the subordinate, carried him through the four years of war.

Prior to Pearl Harbor, the Atlantic, Pacific and Asiatic Fleets came under the operational command of Commander in Chief, U.S. Fleet only for combined operations. Faced with the problem of a “two ocean war” against the Axis powers of Europe and against Japan, President Franklin D. Roosevelt ordered that “the Commander in Chief, United States Fleet, shall have supreme command of the operating forces comprising the several fleets of the United States Navy and the operating forces of the naval coastal frontier commands, and shall be directly responsible, under the general direction of the Secretary of the Navy, to the President of the United States therefor.”

Admiral King assumed these duties on December 30 and shifted from the flagship to Washington, DC. Relieving Admiral Stark on March 26, l942, he also became Chief of Naval Operations. The President directed that these duties, under the Secretary, “shall be contributory to the discharge of the paramount duties of Commander in Chief, United States Fleet.”

Although combined under Admiral King, the Headquarters, Commander in Chief, U.S. Fleet and the Office of the Chief of Naval Operations remained separate entities throughout the war. In general terms COMINCH planned and executed operations, while CNO planned for and provided the men, ships, aircraft, and supplies necessary to carry out operations at sea.

Admiral King was the U.S. Navy member of the Joint Chiefs of Staff and the Allied Combined Chiefs of Staff. He participated in and left his imprint on every important war conference from Casa Blanca to Yalta. While fully supporting the basic allied strategy of defeating Germany first, King nevertheless steadfastly insisted that adequate strength go into the Pacific to keep pressure on the Japanese enemy and prevent it from consolidating earlier gains.

German U-boat sinkings, including off America’s East Coast and in the Caribbean, continued to rise to the point that Britain’s survival was in doubt. Admiral King took extraordinary actions. He transferred the Convoy and Routing Section of CNO to the U.S. Fleet staff in the spring of 1942. As antisubmarine activities expanded and committed forces grew, he recognized the need for overall direction of operations, new techniques and tactics, and close liaison with the Army Air Corps, the British, and the Canadians. On May 20, 1943, Admiral King established the Tenth Fleet, an antisubmarine command, to exercise direct control over all facets of the Navy’s war against U-boats, and for that purpose to allocate antisubmarine forces to all commands in the Atlantic. Admiral King assumed command of the Tenth Fleet, which included a research-statistical analysis group composed of civilian scientists within its structure.

Under Admiral King’s direction the U.S. Navy became the most versatile sea force ever conceived. The U-boat was beaten in the Atlantic, and amphibious operations, unprecedented in their magnitude, led to land operations that brought Hitler’s “Fortress Europe” crashing down. In the Pacific, U.S. submarines severed Japan’s lifelines as powerful task forces fought their way through the island chains to Tokyo Bay, and the Japanese surrendered on board USS Missouri on September 2, 1945.

On October 10, 1945, the headquarters of Commander in Chief, U.S. Fleet, was dissolved, and operational command of the operating forces reverted to the Chief of Naval Operations. Fleet Admiral King turned over his responsibilities to Fleet Admiral Chester Nimitz two months later.

Ernest Joseph King was born in Lorain, Ohio, on November 23, 1878. Prior to graduation from the U.S. Naval Academy in 1901, his class saw brief Spanish-American War service. Five years of sea duty were followed by three years instructing in ordnance and gunnery at the Naval Academy. King returned to sea in 1909, serving in various staff and engineering assignments and, in 1912, he came ashore for duty at the Engineering Experiment Station, Annapolis, MD. His first command was the destroyer USS Terry in 1914.

During World War I, King was awarded the Navy Cross for “distinguished service in the line of his profession as Assistant Chief of Staff for the Commander in Chief, U.S. Atlantic Fleet.” Captain King’s postwar duty brought him back to the Naval Academy to head the Postgraduate Department. He commanded several submarine divisions and the Submarine Base, New London, from 1923 to 1926. During this tour he was officer in charge of the salvaging of USS S-51, which sank off Block Island in September 1925.

In January 1927 King reported to Naval Air Station, Pensacola, for flight training and was designated a naval aviator on May 26 of that year. Aviation-related assignments afloat and ashore followed, interrupted in 1927 by temporary duty in command of the salvage force that raised USS S-4. In 1930 he took command of USS Lexington. He next completed the senior course at the Naval War College and then was Chief of the Bureau of Aeronautics as a rear admiral until June of 1936.

Admiral King served as a member of the General Board and continued to move up the command ladder. On February 1, 1941, he was named Commander in Chief, U.S. Atlantic Fleet, from which assignment he became Commander in Chief, U.S. Fleet/Chief of Naval Operations. He was the first naval aviator named Chief of Naval Operations. The President nominated him for Fleet Admiral, and he took the oath of office for that five star rank on December 20, 1944.

After being relieved as Chief of Naval Operations, Fleet Admiral King continued to serve in an advisory capacity in the Office of the Secretary of the Navy. He died at the Naval Hospital, Portsmouth, New Hampshire, on June 25, 1956, and is buried in the Naval Academy Cemetery, Annapolis, MD. Of Fleet Admiral King, the distinguished naval historian Samuel Eliot Morison wrote, “He was a sailor’s sailor, who neither had nor wanted any life outside the Navy.”