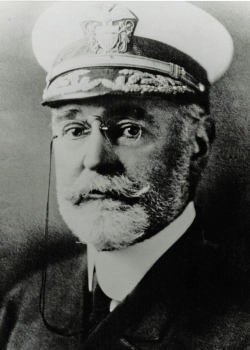 The fate of naval aviation and a critical cruiser shortage in the U.S. Navy, political upheaval in the Caribbean, and continued turmoil in China requiring the presence of ships and U.S. Marines for the protection of American citizens and interests were prominent issues dominating Admiral Eberle’s term as Chief of Naval Operations.

In 1925 President Calvin Coolidge named a board under the chairmanship of Dwight W. Morrow to formulate the first national aviation policy for the United States. The Morrow Board considered not “only commercial aviation but also the place of military aviation in the national defense.” Admiral Eberle’s testimony before the board convincingly countered extremist efforts to deprive the Navy of aviation or to form a separate aviation corps. He stressed that aviation must be integrated with the fleet and naval aviators must also be seamen. “The air forces,” he said, “operating with the Navy, whether based on carriers or on other vessels of the fleet, can only accomplish the maximum results when their operations are coordinated with those of the surface and sub-surface vessels.” Eberle further testified that a separate naval aviation corps would create a large body of officers and enlisted men, “restricted presumably to aviation duties,” who, when serving afloat and while not flying, “would be virtually passengers.” The Morrow Board’s findings on naval aviation reflected the Chief of Naval Operations’ thinking.

The Navy’s first rigid airship, Shenandoah, made a maiden flight in September 1923. Post-World War I economies and the headlong rush toward naval limitations seriously weakened the U.S. Navy, particularly in the category of modern cruisers. Admiral Eberle pressed the need for a “consistent and progressive shipbuilding program” to achieve parity with Great Britain. His presentation of the Navy’s position to Congress, based on sound factual documentation, was instrumental in obtaining authorization for eight vitally needed cruisers of the Pensacola and Northampton classes. A change to Navy regulations in 1924 broadened the powers of the Chief of Naval Operations, authorizing him to “coordinate all repairs and alterations to vessels and the supply of personnel therefor as to insure maximum readiness of the fleet for war.”

Admiral Eberle was recognized as one of the Navy’s foremost training experts. As Chief of Naval Operations, his interest in training, combined with his sponsorship of a strong reserve, was reflected in a major revision of the Naval Reserve structure and in affording reservists realistic up-to-date training. Likewise, the Naval Reserve Officer Training Corps was established in universities “to provide systematic instruction and training at civil educational institutions which will qualify selected students for appointment as officers in the Naval Reserve. . . .”

Born in Denton, Texas, on August 17, 1864, Edward Walter Eberle entered the U.S. Naval Academy from Arkansas and graduated with the class of 1885. He was in charge of the forward turret onboard USS Oregon at the Battle of Santiago in 1898 when the Spanish fleet was destroyed. Eberle took part in Philippine pacification operations before returning for duty at the Naval Academy as Aide to the Superintendent and Commander of Ships. At the academy he wrote Gun and Torpedo Drills for the United States Navy—the first such manual prepared for modern ordnance.

Serving as aide and flag lieutenant to Commander in Chief, U.S. Atlantic Fleet, Eberle, then a lieutenant commander, helped set up the first wireless telegraph installation on naval vessels. He also prepared operating instructions and developed codes for this new and vital communication medium. He served as executive officer on USS Louisiana during the historic around the world cruise of the “Great White Fleet.”

Several commands afloat were followed by assignment in 1911 to command the Atlantic Torpedo Fleet, specifically to develop tactical doctrine for the new destroyers coming into the Navy. Eberle pioneered in the use of smoke screens by destroyers and, off Guantanamo, he employed the emerging aviation corps to determine the depth at which submerged submarines could be detected from the air.

In November 1914 Eberle became Commandant of the Washington Navy Yard and Naval Gun Factory, and was detached the following year to be Superintendent of the Naval Academy.
The acute need for officers generated by World War I expansion placed heavy demands on the academy, which Eberle met with efficiency and resourcefulness. Enlarged and accelerated classes of men were graduated in three years; at the same time large numbers of young men were rapidly trained at the academy as Naval Reserve officers.

After completing his tenure as Chief of Naval Operations, Admiral Eberle served on the General Board until his retirement, August 17, 1928. He died at the Naval Hospital, Washington, on July 6, 1929, and is buried in Arlington National Cemetery.