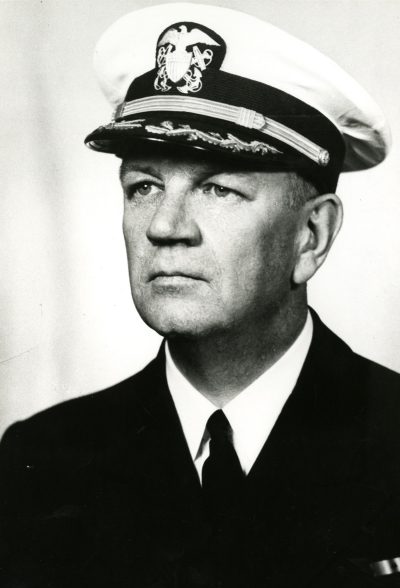 The naval buildup necessary to meet combat and logistic support demands of the war in Korea continued to be the matter of first priority when Admiral Fechteler began his duties as Chief of Naval Operations. Between the opening of hostilities in June 1950 and December 1952, the U.S. Navy added 526 ships to the active list—all but four were reactivated from the reserve mothballed fleets.

Modernization of the Navy moved forward on a broad front. Submarine USS Nautilus, the first vessel in history propelled by nuclear energy, was under construction, as was the aircraft carrier USS Forrestal the first of a new post-World War II class, designed to operate high performance jet aircraft. Several ships from the reserve fleets were converted to guided missile ships and Admiral Fechteler proposed that this number be increased. In collaboration with the Atomic Energy Commission, the Navy initiated development of tactical nuclear weapons, including an atomic depth bomb for use against fast deep-diving submarines.

While fully alert to the potential of atomic weaponry and other technical advances, Admiral Fechteler also stressed the need for conventional warfare capabilities, including amphibious assault. New classes of amphibious ships, LSTs and LSDs, vastly improved and faster than World War II types, were joining the fleet and under construction. The Chief of Naval Operations likewise voiced the conviction that without a first-rate air arm the Navy would be “totally inadequate.” The war in Korea, he said, demonstrated anew “the mobility of carrier-borne air power and its ability to go in and deliver air support to ground troops.” In addition to the Korean experience, events in subsequent years bear witness to the soundness of the Chief of Naval Operations’ views.

Before Congress, where he was characterized as being incisive and extremely well informed, Admiral Fechteler successfully urged funding for a second Forrestal-class carrier. The Chief of Naval Operations also directed his attention to the structure of the North Atlantic Treaty Organization naval forces and specifically the creation of a single NATO naval command in the Mediterranean. As Admiral Fechteler’s tenure as Chief of Naval Operations came to a close, an uneasy truce ended the fighting in Korea, where once again control and optimum use of the sea by the U.S. Navy and other United Nations naval forces had been indispensable to success.

William Morrow Fechteler, “a gutsy product of the Navy’s blue water tradition,” was born in San Rafael, California on March 6, 1896. Graduation from the Naval Academy in 1916 was followed by World War I duty in USS Pennsylvania. He had postwar duty in battleships and destroyers—including command of USS Perry and with various staffs afloat. At the Naval Academy he was an instructor in electrical engineering and physics. He later taught at the Postgraduate School.

At the time of the Pearl Harbor attack, Captain Fechteler was Chief of Staff to Commander, Destroyers, Battle Force, U.S. Fleet. Transferred to the Bureau of Naval Personnel, he served as Director of Officer Personnel until assuming command of USS Indiana in August 1943. Promoted to rear admiral, he commanded or participated in ten amphibious operations in New Guinea and the Philippines as Commander, Amphibious Group Eight. Returning to Washington in March 1945, Admiral Fechteler was Assistant Chief of the Bureau of Naval Personnel, and after commanding the Atlantic Fleet battleships and cruisers, he served for three years as Deputy Chief of Naval Operations for Personnel. Admiral Fechteler became Commander in Chief, U.S. Atlantic Fleet in 1950 and held this command until named Chief of Naval Operations. After leaving office as Chief of Naval Operations, he was Commander in Chief, Allied Forces, Southern Europe and transferred to the retired list on July 1, 1956.