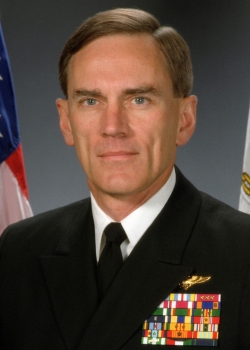 Admiral Jay L. Johnson served as interim Chief of Naval Operations following Admiral Jeremy M. Boorda’s death in May 1996, and he was confirmed for the position in August. During his confirmation hearing, Admiral Johnson stated, “As a vision for the future, let me just say that we will steer by the stars and not the wake.” He explained that four stars of equal magnitude in the constellation would guide the Navy: operational primacy, leadership, teamwork, and pride.

Described as a champion of reform, Admiral Johnson improved the interdeployment training cycle—the period between deployments—by reducing at-sea time, easing wear and tear on equipment, and ensuring Sailors could spend more time in port with their families. His improvements included empowering the Navy’s commanding officers by removing redundant inspections and burdensome paperwork and raising morale among Sailors, while giving commanders the opportunity to truly lead their ships, squadrons, submarines, and SEAL teams.

Even as the Navy was reduced in size over the previous decade, the number of operational tasks for the Navy continued to increase, from promoting stability, providing timely crisis response, deterring aggression, or if required, fighting and winning, a responsibility Admiral Johnson said was the Navy’s “most fundamental, enduring strength.”

Admiral Johnson employed a three-part strategy—shaping, responding, preparing—with a force shaped around 12 carrier battle groups and 12 amphibious ready groups. The Navy often had half of its fleet underway, and 32 percent of that forward deployed, capable of responding to a full spectrum of crises whenever tasked.

Admiral Johnson also led the Joint Chiefs of Staff in calling for improved personnel compensation. He was the first service chief to step forward and support food stamp relief for needy Sailors, Soldiers, Airmen, and Marines. He was instrumental in restoring full retirement pay for military retirees and in pushing for larger increases in annual military pay raises.

With promulgation of the “. . . From the Sea” and “Forward. . . . From the Sea” naval strategies, Admiral Johnson guided the Navy to focus on operating in the littoral zones of the world that encompassed areas of strategic importance to the United States, as well as to enhance the reach inland from the sea for joint and coalition forces.

“Seventy-five percent of Earth’s population and a similar proportion of national capitals and major commercial centers lie in the littorals,” Admiral Johnson said of his 1997 strategy plan. “These are the places where American influence and power have the greatest impact and are needed most often. For forward-deployed naval forces, the littorals are a starting point as well as a destination. The mission may require us to exercise our considerable reach and operate far inland.”

To replace worn-out equipment, Admiral Johnson emphasized development of the next generation of ships, aircraft, and information systems.

An advocate for the F/A-18E/F Super Hornet program, Admiral Johnson emphasized the importance of maintaining the Navy’s air superiority into the future. He believed the F/A-18E/F was the cornerstone of the future of carrier aviation and the Navy’s number one aviation priority. “You can’t think about the F/A-18E/F without thinking about Jay Johnson,” said Secretary of the Navy Richard Danzig. “He virtually willed this program into success. We are buying aircraft that will transform the nature of naval aviation and protect it for decades ahead because of Jay Johnson.”

Additionally, during his tenure Admiral Johnson helped formulate military policy to respond to persistent tensions and aggressive actions in Southwest Asia, such as Operation Desert Strike on September 6, 1996, in retaliation for Saddam Hussein moving 40,000 troops into northern Iraq, threatening the Kurds, and violating the no-fly zone. A coordinated cruise missile attack targeted Iraqi air defense infrastructure. When Operation Provide Comfort ended on December 31, 1996, the Navy continued to offer protection for the Kurdish population in Iraq with the no-fly zones of Operations Northern and Southern Watch, which expanded the reach of the zone to include Saudi Arabia and Kuwait. Hussein continued to resist UN directives to allow Special Commission inspectors into Iraq to look for weapons of mass destruction, so from December 16 to 19, 1998, U.S.-led coalition forces bombed Iraqi targets during Operation Desert Fox.

Admiral Johnson also helped form NATO’s answer to Serbian aggression in Operation Allied Force in 1999. While he served on the Joint Chiefs of Staff, Sailors participated in 45 operations around the world, ranging from humanitarian efforts to intense combat.

Jay Lynn Johnson was born in 1946 in Great Falls, Montana, and raised in West Salem, Wisconsin. Johnson graduated from the U.S. Naval Academy in 1968 and, upon completion of flight training, was designated a naval aviator in 1969. Johnson served two combat tours in Vietnam. He later flew F-14 Tomcat fighters and commanded Fighter Squadron 84. He next commanded Carrier Air Wing One and led its squadrons in a 1986 strike on Libya. In July 1994 Johnson took command of the U.S. Second Fleet. He became Chief of Naval Operations during a time of increased U.S. commitments to international peacekeeping operations.

Admiral Johnson retired as the 26th CNO on July 21, 2000, in a retirement and change of command ceremony at the U.S. Naval Academy, where his naval career began.