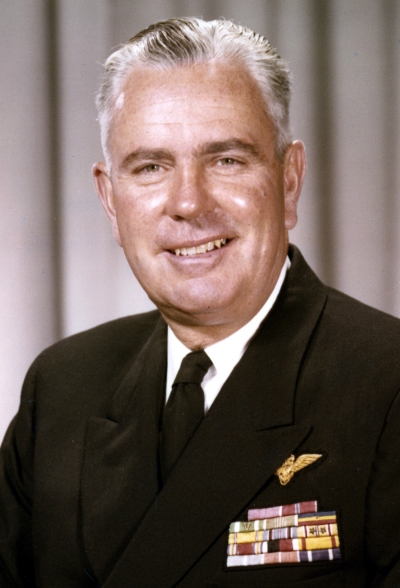 As Admiral Anderson took over the watch from Admiral Arleigh Burke, he pledged to keep the Navy “on course and steaming strong regardless of what the future may portend.” Speaking at the change of command ceremony, the new Chief of Naval Operations could not foresee that the immediate future held an ominous and direct confrontation between the United States and the Soviet Union—the Cuban Missile Crisis.

Reconnaissance aircraft in the fall of 1962 detected Russian offensive ballistic missile launch sites under construction in Cuba. These weapons posed a dire threat to national and hemispheric security. To back demands that the sites be dismantled, missiles removed, and Russian ships carrying missiles or components to Cuba turned back, President John F. Kennedy ordered a naval quarantine of the island. The Chief of Naval Operations was designated to act for the Joint Chiefs of Staff on quarantine matters.

In a graphic demonstration of readiness, U.S. Navy ships of many types were almost immediately on the quarantine line carrying out the Presidential directive. The Soviets backed off. The entire operation was a dramatic illustration of how the precise application of the right amount of seapower can support the foreign policy of the United States. Admiral Anderson said in summation, “There is no substitute for well-trained, versatile and indoctrinated ready forces, under competent professional leadership with secure, rapid and reliable channels of communication.”

Other high-tension areas demanding a naval role during Admiral Anderson’s tenure included Haiti, the Dominican Republic, Southeast Asia, and Berlin. The tinderbox situation in Berlin, after erection of the infamous wall, dictated a decision to activate reserve ships and call selected Naval Reservists to active duty.

Meanwhile, modernization of the fleet and introduction of advanced technology continued to move ahead. Additional fleet ballistic missile submarines and nuclear-powered surface ships went into commission. The Navy, looking to the future as well as the present, went forward in antisubmarine warfare, Antarctic research, space, and oceanography.

Accidental loss of nuclear submarine USS Thresher in April 1963 pointed up the price sometimes demanded by duty and progress. Detection, photography, and ultimate recovery of parts of Thresher at depths exceeding 8,000 feet led to improvements in deep submergence research vehicles and submarine safety.

The Chief of Naval Operations continued to emphasize the importance of research and development, stating, “there is no escaping the facts that if we are going to compete, we have to pay the entry fee, and that today’s probable combat environment of electronic, ballistic, supersonic and nuclear equipment demands sophisticated equipment.”

While Admiral Anderson was keyed to the absolute necessity for the most modern weapon systems, he also knew that the Navy is, and has always been, “primarily an assembly of people,” and that morale “is all important.” He likewise stressed the nation’s requirement for a flexible means of meeting global contingencies of any magnitude and highlighted the preeminent role of aircraft carriers as such a means of projecting U.S. military power wherever deemed necessary.

George Whalen Anderson Jr., a native of New York City, was born in Brooklyn on December 15, 1906. He graduated from the Naval Academy in 1927 and went to duty in cruiser USS Cincinnati before reporting to Naval Air Station, Pensacola, for flight training.

Designated a naval aviator in October 1930, various aviation-type assignments followed, including tours in carriers USS Lexington and USS Yorktown. He was on duty in the Plans Division, Bureau of Aeronautics, when the country was plunged into World War II.

In March of 1943 he was ordered to assist in fitting out a new USS Yorktown and after commissioning, served on board as Navigator and Tactical Officer in Pacific actions. Other World War II duties included staff assignments, usually in a planning capacity, with Commander, Aircraft, U.S. Pacific Fleet; Commander in Chief, U.S. Pacific Fleet and Pacific Ocean Areas; and Commander in Chief, U.S. Fleet.

Following the war, he was a member of Canada-United States and Brazil-United States defense boards before returning to sea in 1948 commanding USS Mindoro. Captain Anderson, completing the National War College course in July 1950, went to Sixth Fleet Staff as Fleet Operations Officer, then to the staff of the Supreme Allied Commander, Europe, followed by command of the carrier USS Franklin D. Roosevelt. In June 1953 he reported to Washington, DC, for duty in the Office of the Chief of Naval Operations and as Special Assistant to the Chairman of the Joint Chiefs of Staff.

In mid-1955, when promoted to flag rank, he spent the next three years as Commander, U.S. Taiwan Patrol Force, and later Chief of Staff to the Commander in Chief, Pacific. He took command of Carrier Division Six in July 1958 and became Commander, Sixth Fleet and Commander, Naval Striking and Support Forces, Southern Europe, on September 14, 1959. Admiral Anderson left his Mediterranean assignment when named Chief of Naval Operations.

After retirement from the naval service, effective on August 1, 1963, Admiral Anderson served as U.S. Ambassador to Portugal and as Chairman, Foreign Intelligence Advisory Board. Admiral Anderson died on March 20, 1992, of congestive heart failure at the age of 85. He is buried in Arlington National Cemetery.