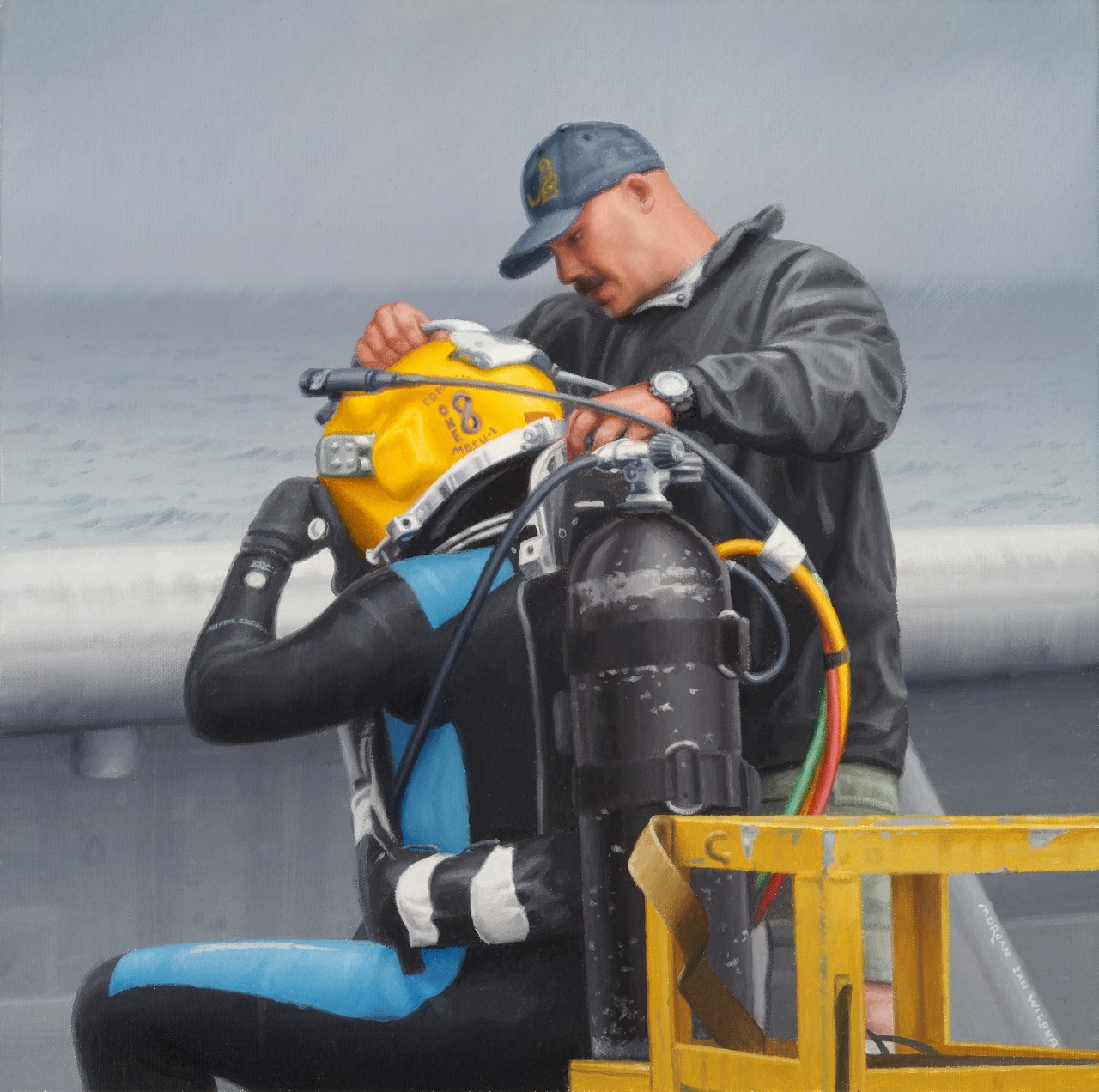 This painting shows the close teamwork involved in diving. The diver going underwater is assisted in his equipment preparation by a fellow diver who remains on the ship, supporting from above. This dive was from USNS Safeguard (TARS-50) in Japanese waters in 2014 as part of the search for a lost U.S. Navy submarine during World War II. Painting, oil on canvas; by Morgan Ian Wilbur; 2015; framed dimension 20H X 20W. Accession#: 2015-012-05.

Since the middle of the nineteenth century, the U.S. Navy has used divers on the salvage and repair of ships, construction, and other military operations. During the Civil War’s Battle of Mobile Bay, swimmers were sent ahead of Adm. David Farragut’s ships to locate and disarm Confederate mines, and in 1898, Navy divers investigated the mysterious explosion of USS Maine while anchored in the harbor of Havana, Cuba.

The beginning of the twentieth century marked the development of a weapon of immense potential—the submarine. With the growth of the U.S. submarine force also came with it an increase in accidents, collisions, and sinkings. Until 1912, U.S. Navy divers rarely went below 60 fsw (feet of seawater), and that was a real problem for submarine rescue operations. In that year, Chief Gunner George D. Stillson set up a program to test diving tables and methods of stage decompression. One goal of the program was to develop better Navy diving equipment as well. Throughout the three-year program, divers went progressively deeper, eventually reaching 274 fsw. As a direct result of the program, the first U.S. Navy Diving Manual was published, and the Navy Diving School at Newport, Rhode Island, was established. After World War I, diver-training programs were cut and the school was not reinstituted.

In 1927, USS S-4 (SS-109) was lost in a collision with the Coast Guard cutter USS Paulding. The first divers to reach the submarine at 102 fsw were able to make contact with the men trapped inside, but were unable to rescue them due to a hose connection that was feasible in theory but in reality could not provide the men in the submarine with oxygen. The incident, along with other submarine accidents, sparked new interest in diving operations. The Naval School, Diving and Salvage, was re-established at the Washington Navy Yard during that year, and a rescue chamber that was essentially a diving bell with special fittings for connection to a submarine deck hatch was developed. The apparatus, called the McCann-Erickson Rescue Chamber, was proven somewhat effective in 1939 when it was used to rescue the crew of USS Squalus (SS-192) that suffered a catastrophic valve failure off the Isle of Shoals.

Navy divers plunged into World War II with the Japanese attack on Pearl Harbor. By 0915 on 7 December 1941, salvage teams were already at work cutting through the hull of overturned battle ship USS Oklahoma (BB-37) in an attempt to save Sailors trapped inside the ship. Salvage operations were not the only missions assigned to Navy divers during the war. Many dives were made to inspect sunken enemy ships in an attempt to recover materials of intelligence value. The Navy’s Underwater Demolition Teams (UDT) were created when bomb disposal experts and Seabees (combat engineers) teamed together in 1943 to devise methods for removing obstacles the Germans were placing off the beaches of France. In the Pacific, the first combat mission for UDT’s was a daylight reconnaissance and demolition project off the beaches of Saipan in June 1944. During the Battle of Okinawa, one UDT removed 1,200 underwater obstacles in two days, under heavy fire, without a single casualty.

Navy diving, of course, is not limited to combat and salvage operations. Increasingly, a major part of the diving mission is the inspection and repair of naval vessels to decrease downtime, and the need for dry-docking. Other aspects include recovery and research of torpedoes, installation and repair of electronic arrays, underwater construction, and the recovery of downed aircraft.

In April 1963, the loss of USS Thresher (SSN-593) had a profound effect on the development of new diving equipment and techniques. The submarine and her crew sank to 8,400 fsw, a depth beyond the survival limit of the hull and far beyond the capability of existing rescue apparatus. The loss sparked two special study groups whose recommendations called for the vast improvement in the Navy’s undersea capabilities. In 1970s, the development of the Deep Submergence Rescue Vehicle (DSRV), capable of rescue to a depth of 5,000 fsw, vastly improved the Navy’s submarine rescue capabilities. Three additional significant areas of improvement included saturation diving, the development of deep diving systems, and progress in advanced diving equipment design.

Today, U.S. Navy divers are part of an extraordinary community that takes them from the darkest depths of the world’s oceans to freezing arctic-like conditions underneath icebergs, accomplishing tasks that can only be performed by this highly trained naval community. 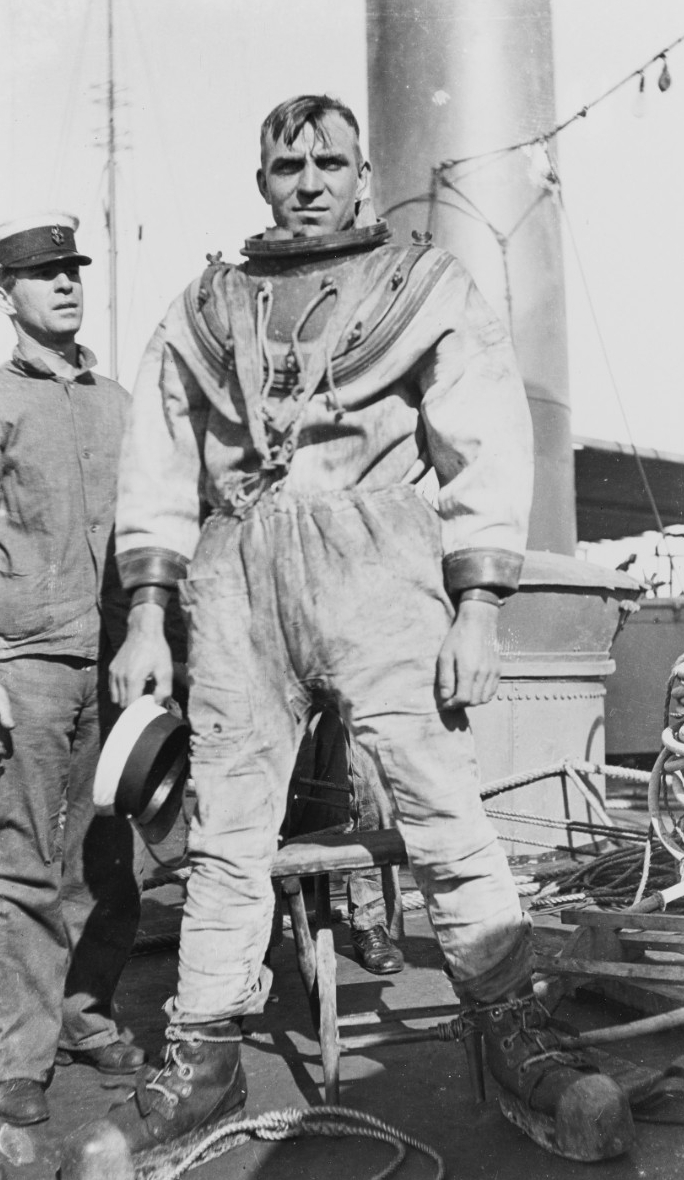 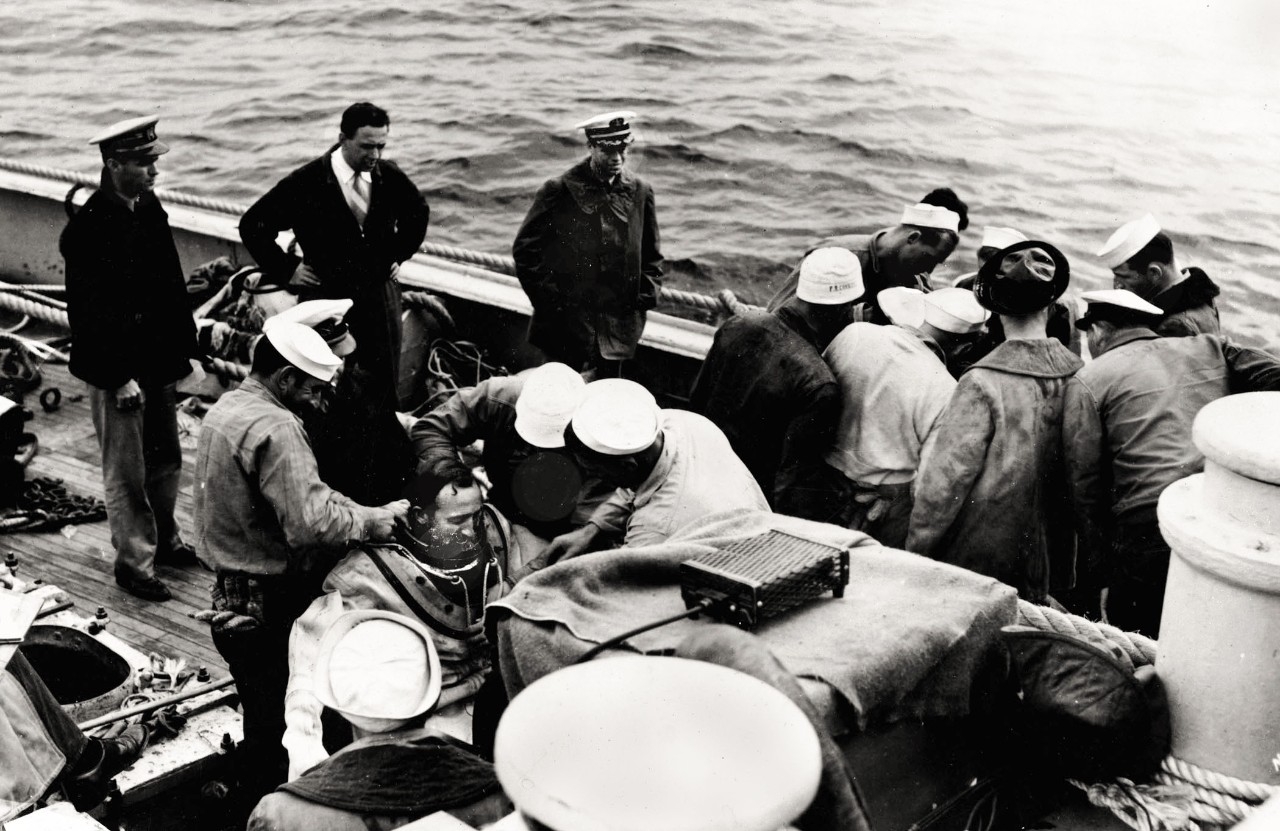 Cmdr. Charles "Swede" Momsen stands next to the rail (third from left) as Falcon (ASR-2) crewmen suit-up two deep sea divers during the rescue/salvage operation following the sinking of the U.S. Navy submarine Squalus (SS-192). Momsen led the successful effort, which resulted in the rescue of 33 submariners trapped aboard Squalus and remains to this day the greatest undersea rescue in history. U.S. Navy photo. 030808-N-0000X-002 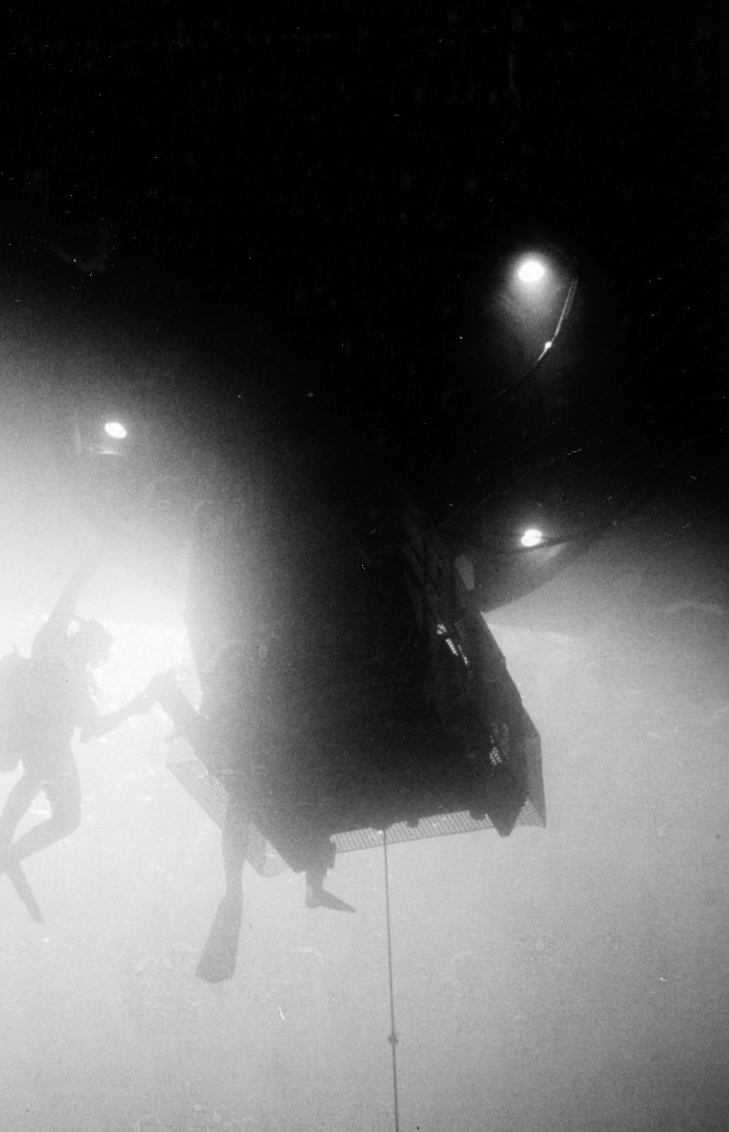 Divers swim around the Personnel Transfer Capsule during a shallow water swim out test. The capsule will be used with the Sealab III habitat. At San Clemente, California, 1968. Copyright owner: National Archives. Catalog#: K-81561. 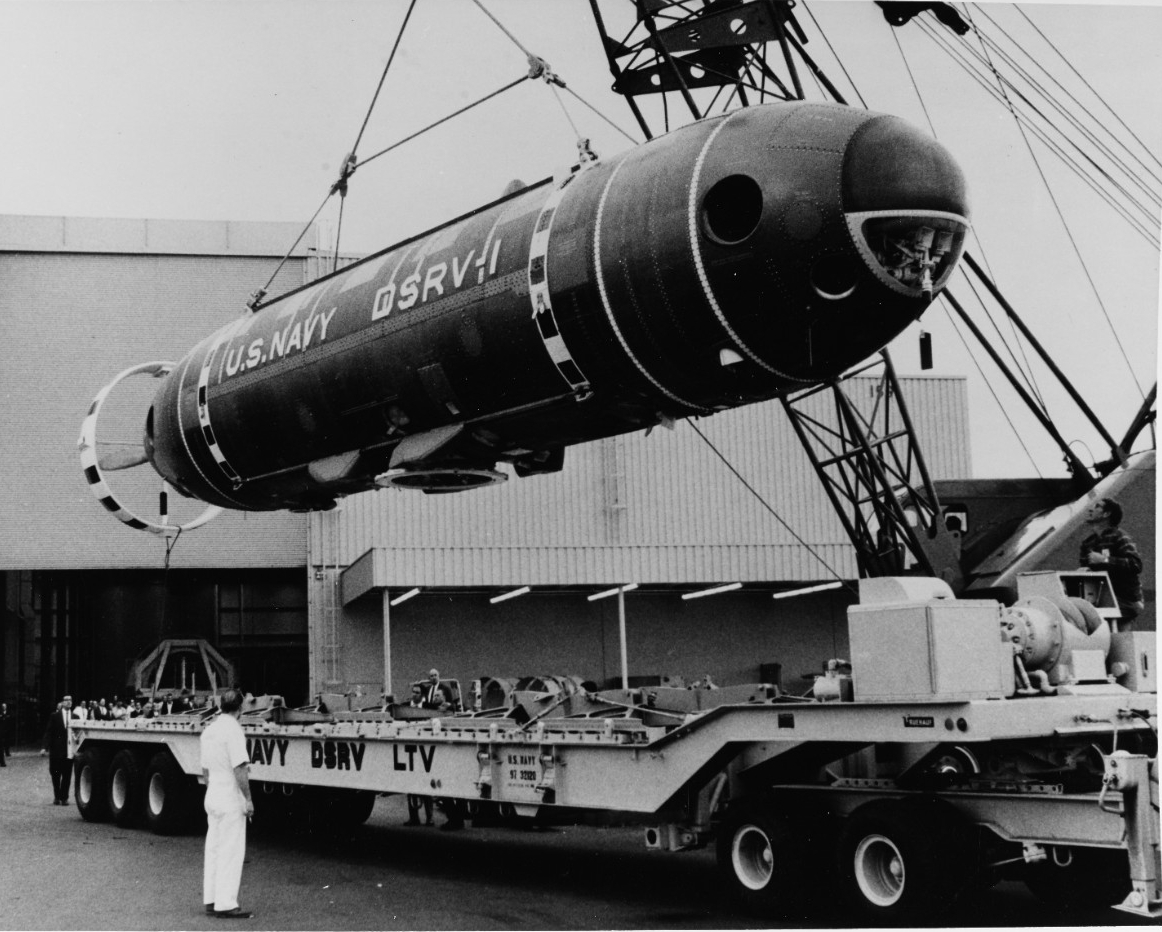 The Navy's prototype deep submergence rescue vehicle (DSRV) was built by Lockheed Missiles and Space Co. and capable of rescuing up to 24 Sailors at a time from a disabled submarine. The small submergible mates with the escape hatch of a downed submarine and transfers crewmen from depths down to 5,000 feet. Dated January 1970. Copyright owner: National Archives. Catalog#: USN 1142506. 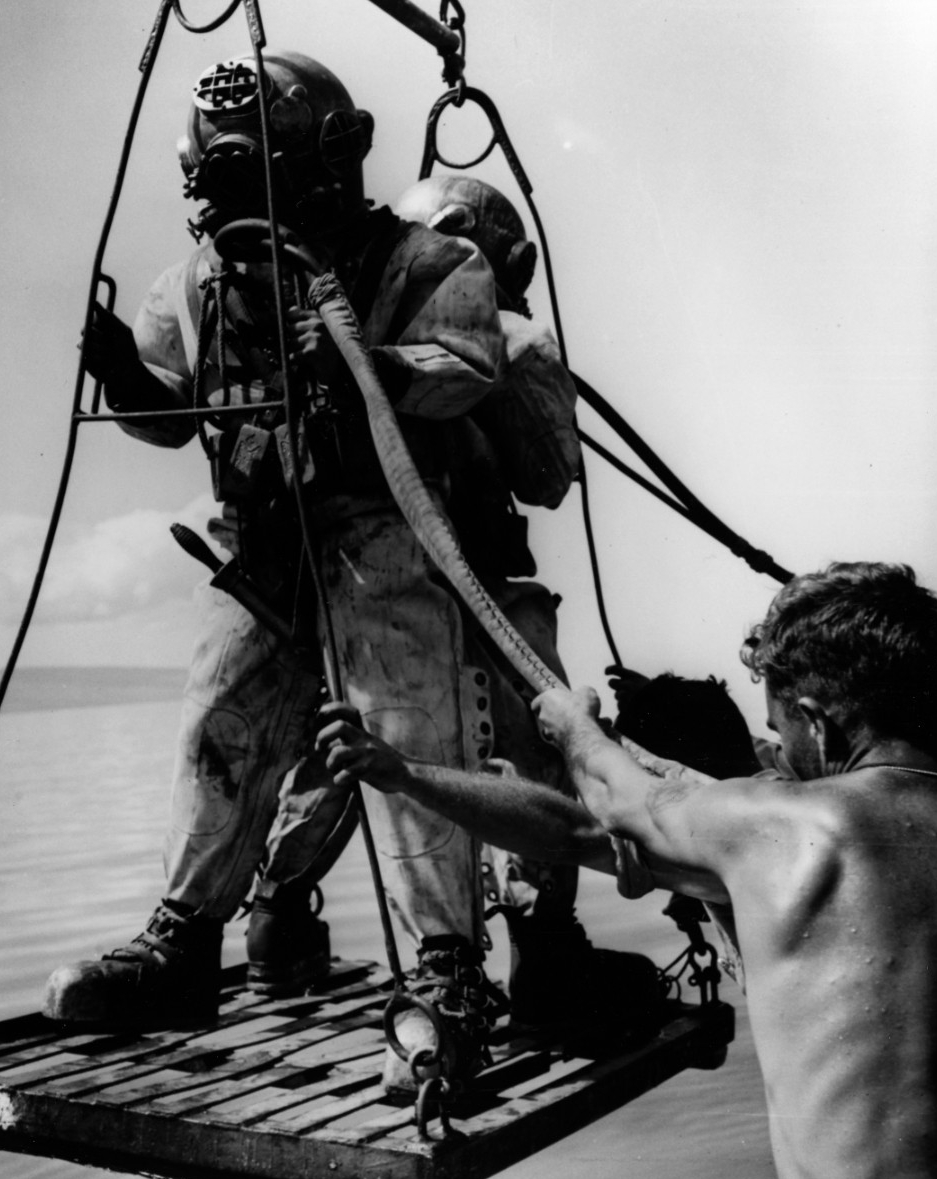 Divers are brought to the 150 foot level where they have made requalification dives from the fantail of Grapple (ARS-7). Ship was off Lanai, Hawaii. Copyright owner: Naval History and Heritage Command. Catalog#: NH 89169. 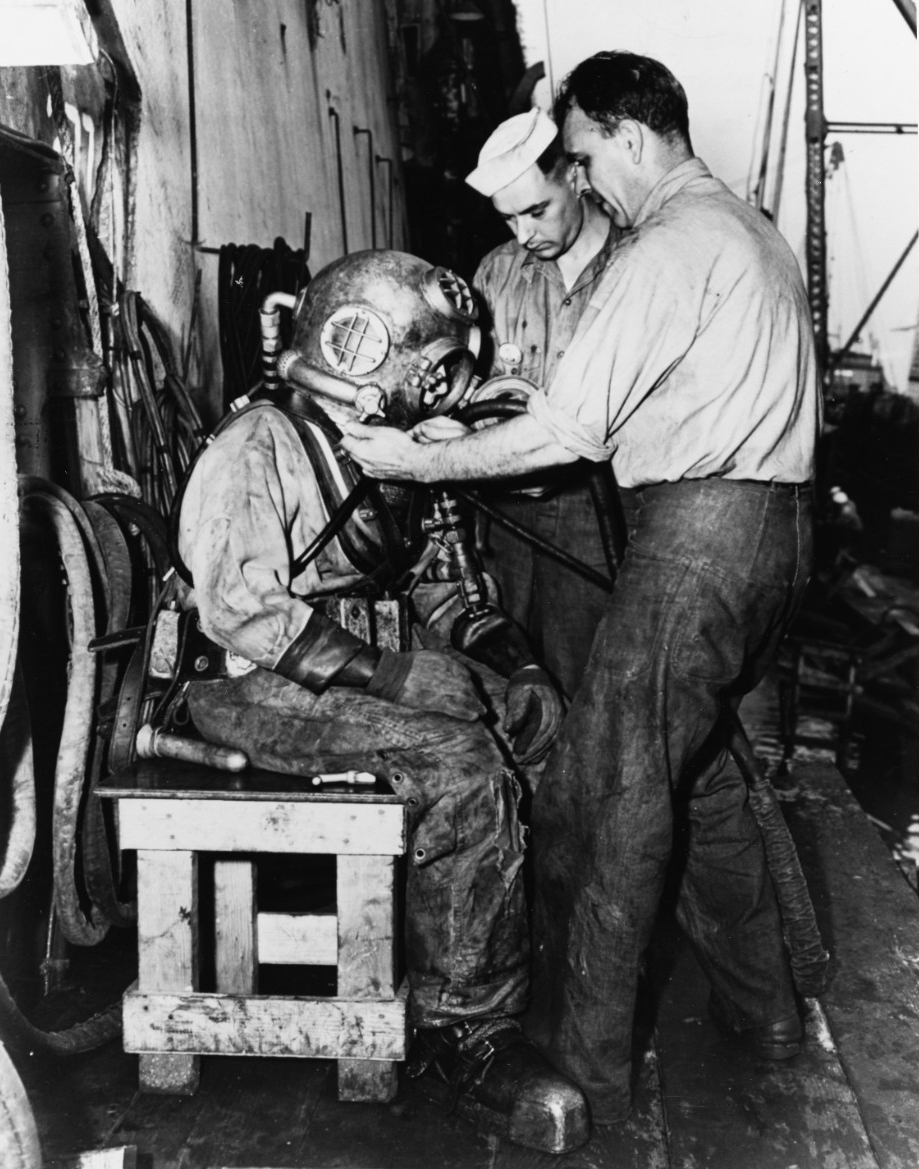 Divers who are assisting in the salvage work on LaFayette (AP-53) October 1942, must have their equipment checked regularly. Copyright owner: Naval History and Heritage Command. Catalog#: NH 89170. 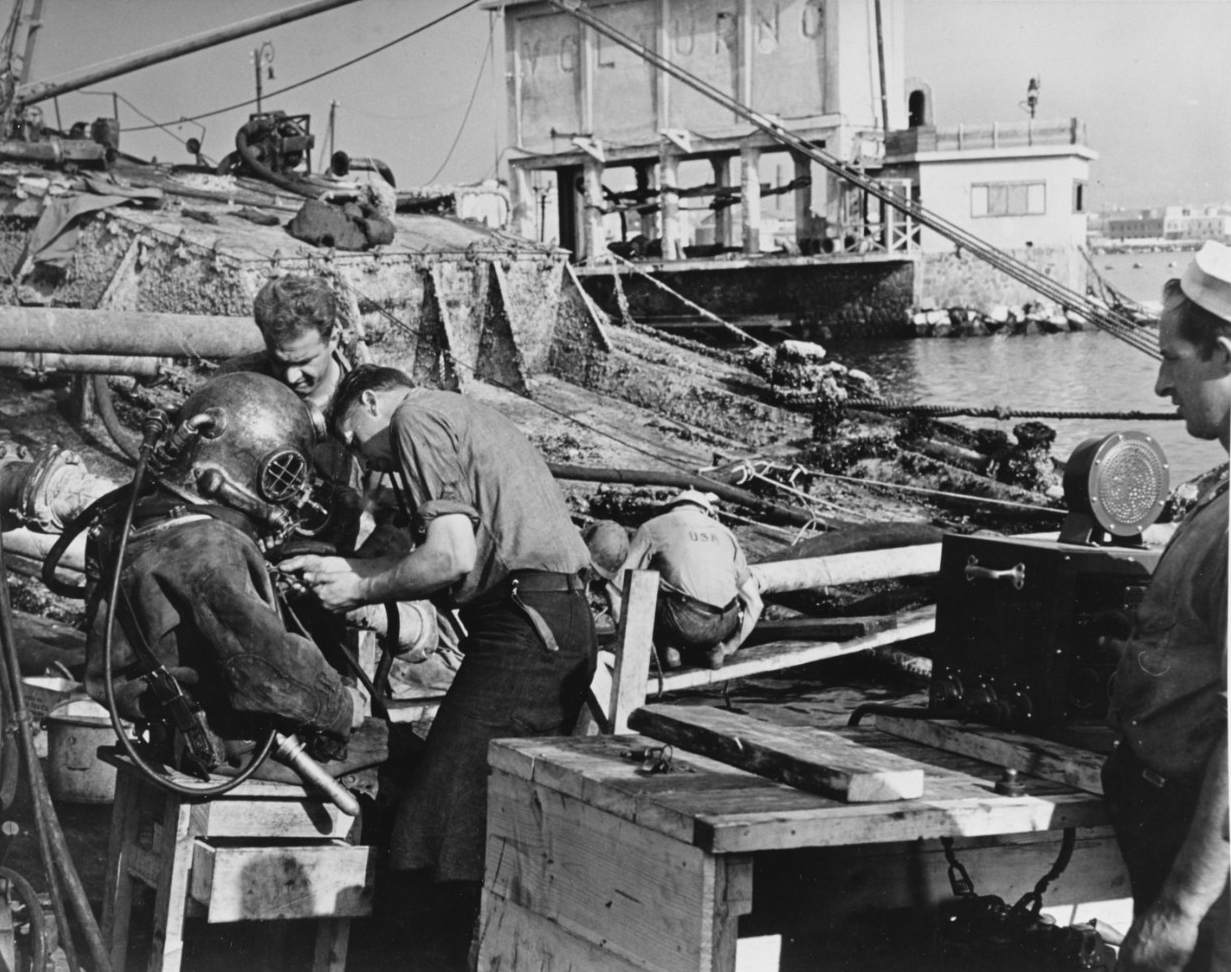 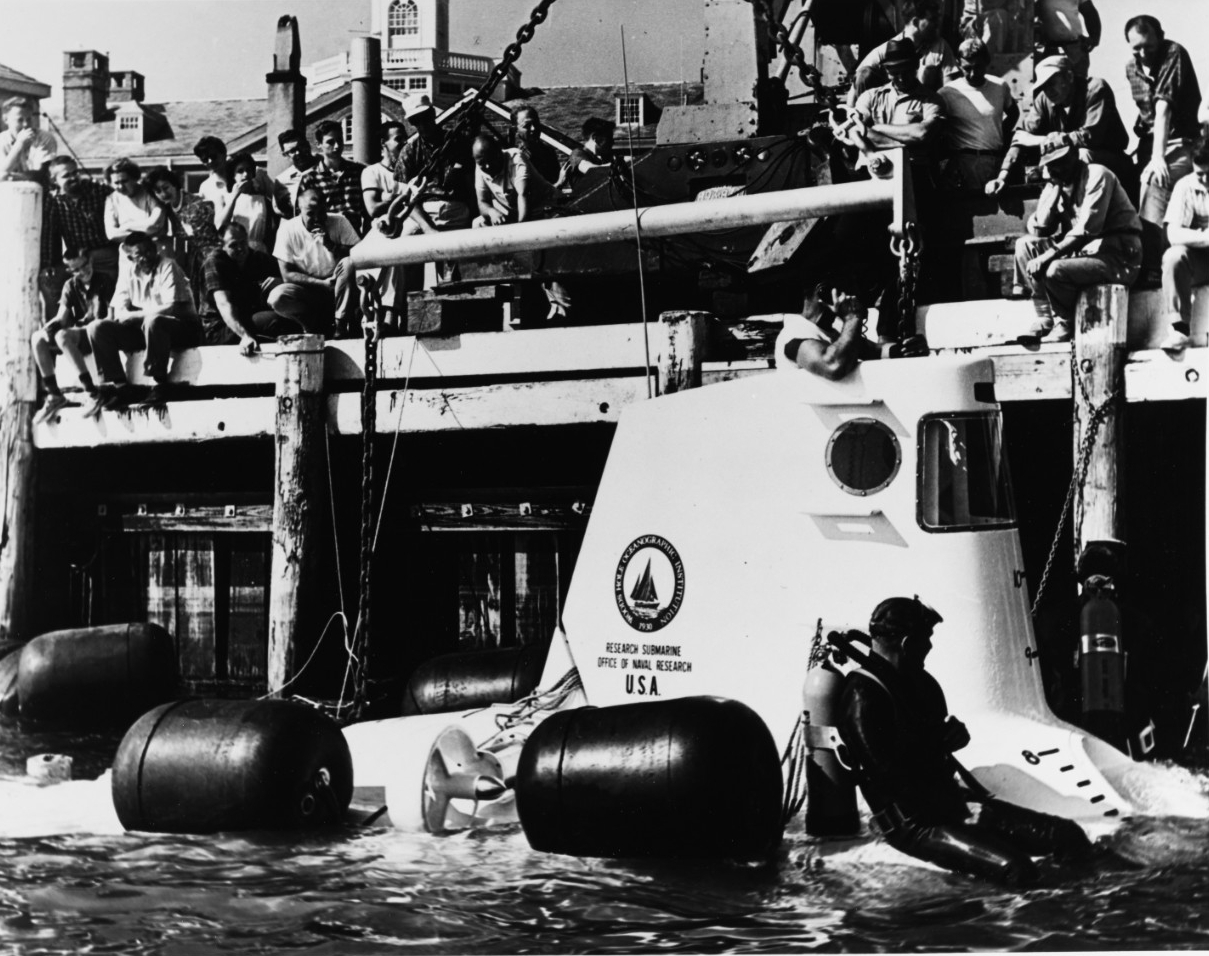 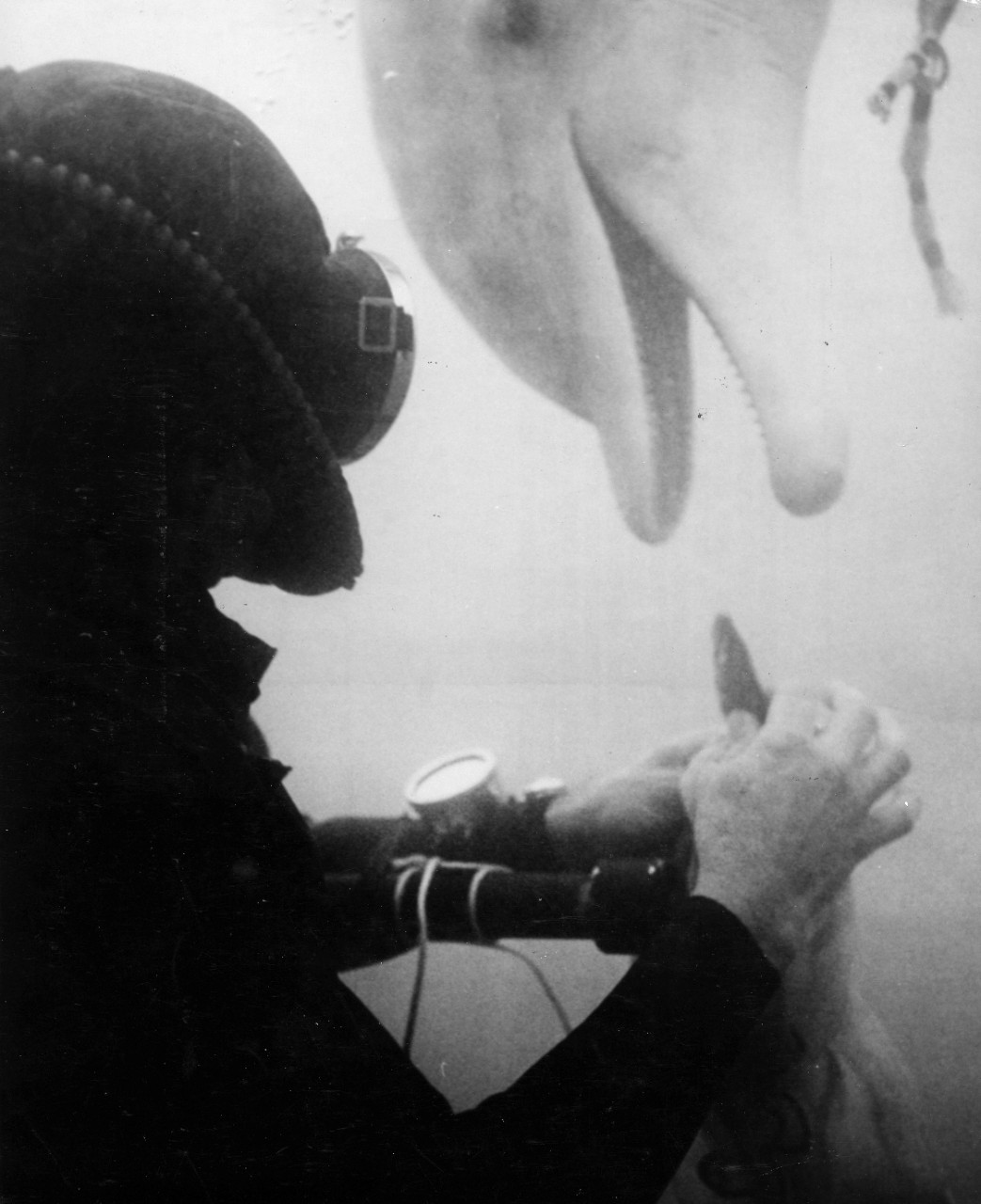 Navy diver John Reaves of SEALAB II Project, rewards porpoise Tuffy with a fish as they train together 80 feet down in the open ocean off Point Mugu, California. Tuffy worked with Reaves and other divers in experiments to see how a porpoise can assist man underwater. A snap hook is attached to Tuffy's harness which enables him to carry messages and tools to the divers. The experiments with Tuffy during SEALAB II was a project of the U.S. Naval Missile Test Center, Point Mugu, California. Copyright owner: National Archives. Catalog#: USN 1112610.