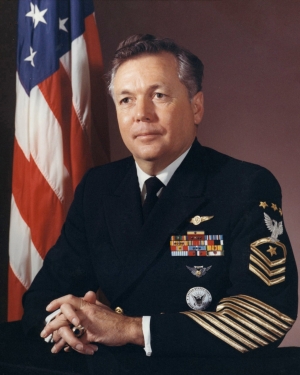 Master Chief Whittet enlisted in the Navy on March 24, 1943, and was assigned to the Aviation Machinist’s Mate School in Chicago, Illinois. He followed the school with an assignment with Carrier Aircraft Service Unit SEVEN, and later, to THIRTY-EIGHT, which operated from Guam. He won his combat aircrewman wings flying 31 missions with Torpedo Squadron TWENTY from the carrier USS Lexington and Torpedo Squadron EIGHT-SIX from USS Anzio, which won Presidential and Naval Unit Citations respectively. He ended his wartime service aboard USS Anzio following the ship’s participation in the capture of Iwo Jima.

Following the war, Master Chief Whittet completed flight engineer training for the B-24 “Liberator” aircraft and was assigned to Saudi Arabia. In 1950, he was transferred to Composite Squadron SIXTY-ONE at Miramar Naval Air Station, San Diego, California. While serving as the leading petty officer of a shipboard detachment of F9F “Panther” aircraft, he was assigned temporary duty with Carrier Air Group ONE-HUNDRED-TWO which deployed to the Western Pacific aboard the carrier USS Bon Homme Richard. While there, his air group participated in combat action in the Korean War and was awarded the Navy Unit Commendation.

Master Chief Whittet followed his Korean War duty with assignments to several naval air station and aviation activities as a Jet Power Plant Instructor in the United States. In 1957 he was transferred to the Continental Air Defense Command at Colorado Springs, Colorado, where he worked as the flight crew plane captain for the Commander of Naval Forces at that command. In March 1960 Master Chief Whittet joined Fighter Squadron ONE-NINETY-THREE and made three additional Western Pacific deployments aboard USS Bon Homme Richard.

Returning to stateside duty, Master Chief Whittet spent two years with heavy attack squadrons at Whidbey Island, Washington, and in 1964, was assigned to the Aerospace Recovery Facility at El Centro, California, where he performed duties as the Assistant Aircraft Maintenance Officer and Leading Chief Petty Officer. In 1967, Master Chief Whittet was transferred to the Naval Air Station at Argentia, Newfoundland, and served a three-year tour of duty as the Aircraft Maintenance Control Chief and the Senior Enlisted Advisor to the Commander, Fleet Air Argentia. And immediately prior to assuming the duties as the Master Chief Petty Officer of the Navy, he was assigned as the Master Chief of the U.S. Atlantic Fleet Air Force, in Norfolk, Virginia.

Read more about MCPON Whittet in excerpt from Winds of Change: The History of the Office of the Master Chief Petty Officer of the Navy, 1967–1992.