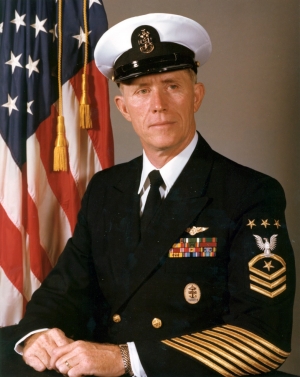 Master Chief Avionics Technician Billy C. Sanders was born in Alabama. After graduating from high school, he initially began his military career by joining the U.S. Air Force in February 1954. Upon being discharged in 1957, Master Chief Sanders joined the Air Force Reserve. He attended Huntington College in Montgomery from January to May 1958.

The Master Chief enlisted in the U.S. Navy on May 9, 1958, and after receiving his clothing issue at Charleston, South Carolina, he was transferred to Naval Air Technical Training Center (NATTC) at Memphis, Tennessee, to attend Aviation Electronics Technician “A” School. Upon graduation from “A” school in Glynco, Georgia, he reported for duty as a crewman on C-121 type aircraft. He advanced to Third Class Petty Officer on December 16, 1959, and to Aviation Electronics Technician Second Class on November 16, 1962.

Master Chief Sanders was transferred in March 1964 to attend an instructor training course at Memphis, and ultimately reported to Naval Air Maintenance Training Detachment (NAMTD) 1099 at NAS Key West, Florida, as an Anti-Submarine Warfare Systems Instructor. He returned to NATTC Memphis in June 1967 as a student, completing the avionics “B” school in February 1968. He advanced to Chief Petty Officer on February 16, 1968.

Reconnaissance and Maintenance Squadron ONE, homeported at Atsugi, Japan, was the Master Chief’s next assignment from May 1968 until June 1971. While serving as detachment CPO at DaNang, Vietnam, Master Chief Sanders received two Air Medals and the Combat Action Ribbon. He advanced to Senior Chief Petty Officer on March 1, 1971.

In May 1971, Master Chief Sanders was transferred to Naval Air Maintenance Training Detachment 1002 at NAS Albany, Georgia, and later at NAS Key West. He served as an instructor on RA5C aircraft and leading CPO during this tour. The Master Chief advanced to Master Chief Avionics Technician in August 1974.

Master Chief Sanders reported to Fighter Squadron 151 aboard USS Midway homeported in Yokosuka, Japan, in September 1974 where he served as maintenance chief on F4N aircraft and as Command Master Chief. He was awarded the Navy Achievement Medal during this tour.

Master Chief Sanders was transferred to NAS Pensacola, Florida, in October 1977 where he served as Air Operations Maintenance Chief until March 1978. He then served as Command Master Chief for NAS Pensacola and Training Air Wing SIX.

The Master Chief reported to Naval Air Facility Lajes, Azores, in February 1980 where he served as the maintenance chief and as Command Master Chief. During this tour, he received the Navy Commendation Medal.

Read more about MCPON Sanders in excerpt from Winds of Change: The History of the Office of the Master Chief Petty Officer of the Navy, 1967–1992.