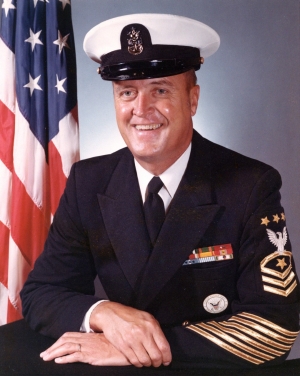 Enlisting in the Navy in 1948, Master Chief Walker received his recruit training at the Naval Training Center, Great Lakes, Illinois, where he was cited as company honorman. He then attended Radarman “A” School in Boston, Massachusetts and was assigned to the destroyer USS McKean (DD-748). Having advanced to Radarman First Class, Petty Officer Walker then served two year tours aboard the destroyer escorts USS Seiverling (DE-441) and the USS Erben (DE-631). While aboard Erben, he deployed to the Western Pacific in support of the Korean Conflict. In October 1955, RD1 Walker reported to Norfolk, Virginia, as instructor at Radarman “A” School. He was promoted to Chief Petty Officer in June 1956.

Following advanced schooling in Radarman “B” School at Treasure Island and San Diego, RDC Walker was assigned to USS Guardian (AGR-1). Homeported in Davisville, Rhode Island, the Guardian was a converted World War II liberty ship being used for radar surveillance. During this tour, Chief Walker was advanced to Senior Chief in 1961 and Master Chief on November 16, 1963.

Master Chief Walker was ordered to his second tour of shore duty in 1964 as Director of Training, Radarman “A” School, Great Lakes, Illinois. Three years later, he reported aboard the destroyer, USS Harland R. Dixon at Newport, Rhode Island, where he was assigned various command duties including senior enlisted advisor and leading chief for combat systems training at the Fleet Combat Direction Systems Training Center, Dam Neck, Virginia. For his outstanding performance, he was awarded the Navy Achievement Medal.

In July 1972, Master Chief Walker reported aboard the aircraft carrier USS John F. Kennedy (CV-67). He acted as leading chief of Kennedy’s Operations Department and later, as Master Chief Petty Officer of the Command. For his excellent performance in this capacity, he was awarded the Navy Commendation Medal. In October 1972, the Radarman rating was changed to Operations Specialist and RDCM Walker automatically converted to OSCM at that time. In November 1974, Master Chief Walker was selected to serve as Master Chief Petty Officer of the Force, Naval Air Force, U.S. Atlantic Fleet.

In addition to the Navy Achievement and Navy Commendation Medal, Master Chief Walker holds seven other awards including the Navy Occupation Medal, the Korean Presidential Unit Citation and the Good Conduct Medal.

Read more about MCPON Walker in excerpt from Winds of Change: The History of the Office of the Master Chief Petty Officer of the Navy, 1967–1992.