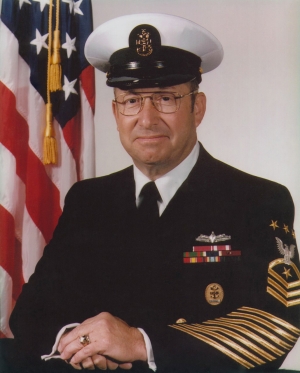 Master Chief William H. Plackett grew up in Illinois, and enlisted in the Navy on October 18, 1956. After graduation from recruit training, he attended radioman "A" school in Norfolk, Virginia.

His first duty station was with the Naval Control of Shipping Office on Bahrain in the Persian Gulf and earned promotion to Petty Officer Third Class. He transferred to the staff of Commander, Amphibious Force, U.S. Atlantic Fleet, embarked in USS Mount McKinley in August 1959. Following that tour, he went back to the schoolhouse for Radioman "B" school and was assigned to Representative, Commander East Force/Naval Control of Shipping Office. He was there during the Arab-Israeli War. In September 1967, just 11 years after joining the Navy, he was selected as a Chief Petty Officer. Upon completion of a tour aboard Forrestal, which included an extended ten-month deployment in the Mediterranean, he served as an instructor at Radioman "B" school in Bainbridge, Maryland.

Master Chief Plackett was selected as the sixth Master Chief Petty Officer of the Navy by Admiral James Watkins, Chief of Naval Operations, on July 17, 1985, and assumed his duties on October 4, 1985.

Read more about MCPON Plackett in excerpt from Winds of Change: The History of the Office of the Master Chief Petty Officer of the Navy, 1967–1992.